We couldn’t believe that over a thousand of you took the time to take our little blogiversary survey. Thank you all so much. And can we just say that it was really nice to virtually meet you and learn a little more about where you’re from, who you live with and even the names of your pets (of course Burger loves making friends- and is especially entertained by the idea of hanging out with Tater and Angus since they also have food-related names). We discovered that we have quite a range of readers, from age 15 to 66! In fact, one of our readers named Kay listed herself as 62 and “cool as heck” and even mentioned that she rides a Harley. Awesome, right? We’re also happy to see that some men actually weighed in too (suddenly I don’t feel so alone).

Oh and we couldn’t believe how spread out you guys are. Not only do we have readers in pretty much every state from Alaska to Hawaii, we also have some pretty cool international peeps dropping in from: Croatia, Singapore, France, Australia, Belgium, Greece, Bermuda, Colombia, Austria, Switzerland, Mexico, England, Estonia, China, Portugal, Scotland, Ireland, Wales, South Africa, Sweden, Italy, Holland, Germany, Spain, Malaysia and even right to our north in Canada. Is that not amazing or what? Seriously we’re blown away, and so glad that you’re all enjoying our blog. Merci! Gracias! Grazie! Danke! And that’s all I know… 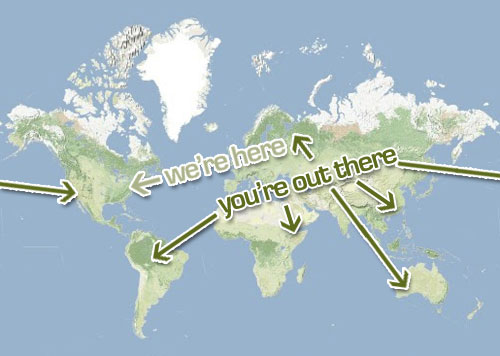 But that’s not all we learned from your responses. We discovered that many of you are chomping at the bit for more rental ideas, organizing suggestions, cheap DIY projects, tutorials in general, before and afters, house crashing excursions, entertaining ideas, green-related projects and even more of Almost Doctor Dan (and we’ll have you know we’re already brainstorming his next appearance). There was also an overwhelming request for “more Burger” which we intend to deliver. Of course his formerly tiny chihuahua head can hardly fit through the door now that he knows he’s so sought after. Come to think of it ever since he was on the cover of The Nest magazine he’s been acting pretty smug.

Opinions were pretty split in two areas though: videos and design dilemmas. A lot of people lamented that they couldn’t covertly watch videos at work (Heather cleverly asked if we could somehow hide our videos in an Excel spreadsheet so she could get away with watching them) and we totally understand. But because a lot of other people listed videos as one of their favorite things – and because we enjoy making them – we’ll be keeping them as a regular feature. Just think of them as a “bonus” to the rest of the week’s posts that are chock full of work-safe photos and text. So skip ’em if you must… or maybe sneak a peek at home?

As for design dilemmas, many people begged for more frequent after photos (might we add that we’re dying for them as well) and some people said they were just too long/hard to picture so they skimmed them or skipped them altogether, which we also totally understand. But because many other people listed them as their favorite things, they too will remain as a regular feature although there are always many other topics and projects to read about between each one (so rest assured they won’t bump anything else that we’re itching to write about). In short: Karen’s request really rang true with us: “I would not say less of anything. If there is a particular post that doesn’t suit me, i can just scroll past, but you shouldn’t take anything away!” Done and done.

And although there were those two minor discrepancies, the majority of our commenters actually just encouraged us to keep doing what we’re doing, which is always nice to hear (it seems as if we’re barking up the right tree for the most part) so we breathed a nice long sigh of relief about that and got to work adding all the other ideas that people tossed out to our to-do list. You know we love a project. Seriously, we do.

We also got some good laughs out of all the little tidbits that were flattering, random and everything in between. For example we learned that Jessica loves cheese (hilariously random) and that our blog is LauraC’s homepage (speechlessly flattering). We also couldn’t help but smile when a few people mentioned that they appreciate the fact that we take the time to proofread (that’s Sherry’s inner copywriter coming out) and that we work to keep Young House Love a drama free zone (what can we say, we want everyone to see rainbows and unicorns when they come here).

Overall it was insanely fun to read all about you guys, how you live, who you share your home with and what you’d love to see in year three. In fact our heads are already spinning with a ton of new post topics thanks to all of your suggestions so everyone should go ahead and give themselves a round of applause, dust their shoulders off, or give themselves a pat on the back (just pick your favorite self-congratulatory gesture and run with it). Thanks again so much for taking the time to tell us who you are and what fries your bacon. Made. Our. Day.

PS: And as for those who slipped some questions in there about where we got something in our house or how we like to decorate for the holidays, you can check out our Room By Room Source List (located in a link on the top of our House Tour page) to find out where we snagged almost everything in our house and the bottom of our How To page for a slew of holiday decor related posts. Of course we have more where those came from in the hopper for this coming season, so stay tuned…