Yeah, we’re those neighbors. You know, the ones who are so busy working on the inside of the house (slash baby-wrangling) that our yard is looking a little worse for wear. Check out the weed convention taking place under our mailbox: 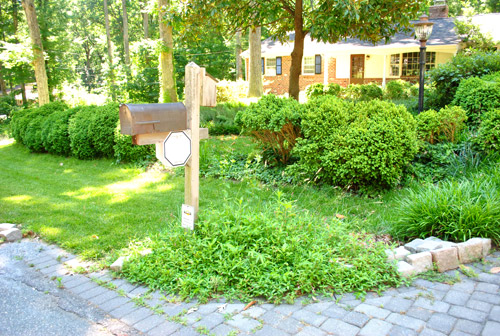 And hark, who is that sweet little guy peering out of the overgrown insanity? 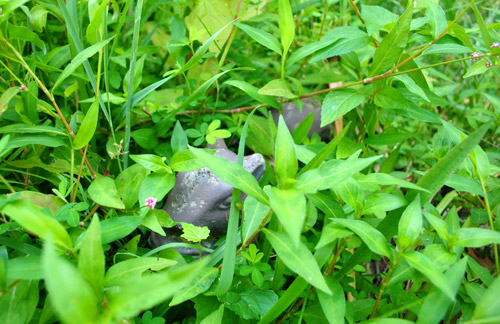 Why it’s a sweet iron squirrel left by the previous owners. And yes, I do love him and occasionally pet him. His name is Norman. 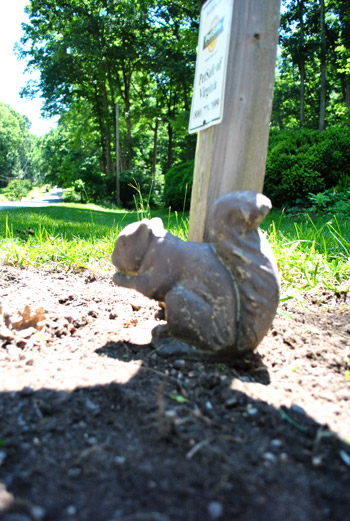 So the first step of the whole mailbox makeover was clearly to weed. For the first time in half a year. Yup, other than this mom-assisted weeding event, we haven’t done it at all since moving in.

I just got a bucket and filled it five times with all of the stuff sprouting up around the mailbox post: 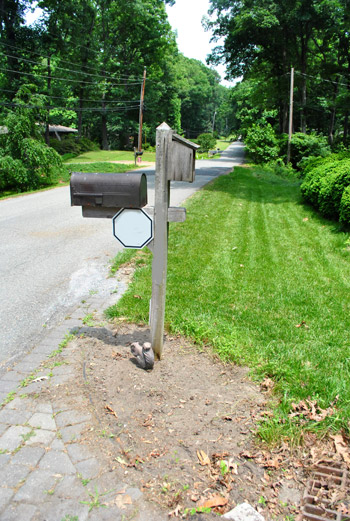 Then we used some landscaping fabric to block those evil weed babies from coming back (since we’ve established that regular weeding isn’t our strong suit) and grabbed two $7 pots of fast growing all-summer-blooming petunias from Lowe’s. They tend to creep outward and get pretty big throughout the summer, so we think they’ll fill in that whole area nicely without having to buy ten pots of different things to plant. 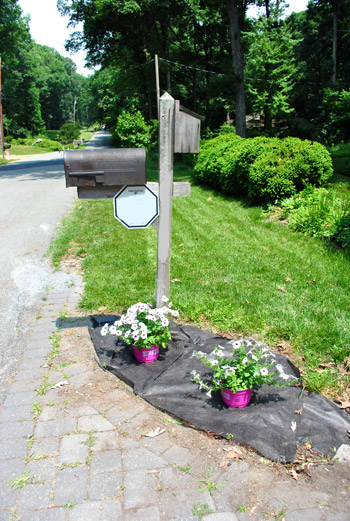 We just cut little x’s into the landscaping fabric and dug in our petunias so they could spread their roots under the fabric – without a lot of other weeds coming up through the opening (hopefully). 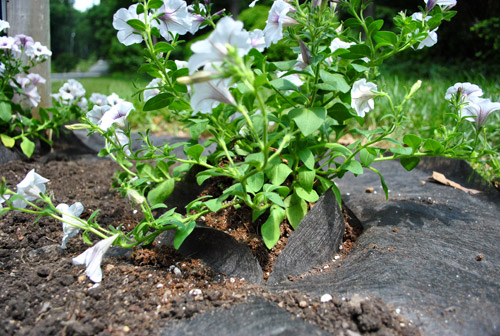 Then we added an ultra thin layer of top soil to hold things down and a nice thick moisturizing layer of mulch. Can’t wait for these babies to grow a bit and creep outwards to fill more of our little mulched area with blooms. 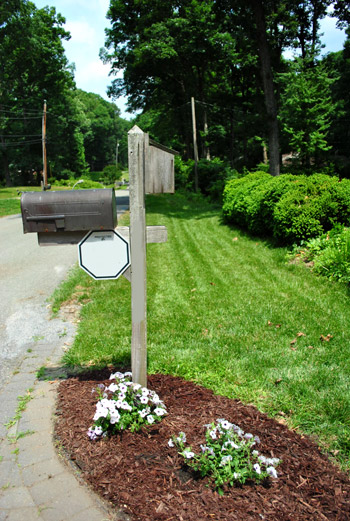 Oh and see that area on the side of the post in the pic above that looks like it’s painted gray? That’s where our house numbers are so I just “painted” over them in photoshop for privacy reasons. And see that big blank stop-sign looking thing? That’s our alarm sign that I painted over in Photoshop to obscure it as well (as for the shape giving anything away, multiple companies have the same shape so it’s all good). Our house is armed like Fort Knox since we’re paranoid parents who realize that putting your whole house on the internet requires a few more precautions than the average home. So when our alarm company recommended that we not share their name on the internet (for maximum house security since they didn’t want anyone to think they knew the inside scoop on our system or try to research it or something – even though the way they installed our system is different than the norm with a bunch of crazy sci-fi extras) we were happy to oblige.

We actually thought it was pretty darn awesome of them to recommend the not-sharing thing since most companies would probably cross their fingers for a mention. They’re serious about security. Like Jack Bauer serious (or Chloe O’Brien serious). But we weren’t exactly thrilled about the three tin signs junking up our mailbox. A single alarm sign would usually be hung facing the street on the base of the post, but there was an old sign for an electric fence (which is no longer in use on our property) there instead. So they hung two signs on either side of the… arm?… of the mailbox. So after longer-than-necessary debating, J and I decided to remove both alarm signs along with the electric fence one and just hang one alarm sign in its place near the base. Here I am after removing both alarm signs and starting on the electric fence sign. 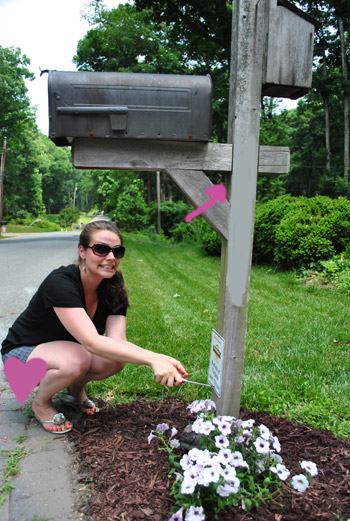 Oh yeah and my shorts were looking a little short so I added a “modesty heart.” But the real story of the picture above is the pink arrow (which explains my skeeered face). By removing the alarm signs, we uncovered this: 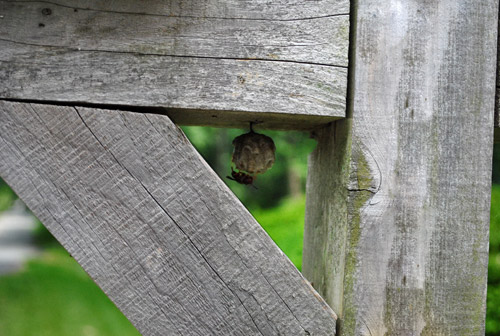 A wasp (or hornet’s) nest. Le gasp. I just left him alone and he left me alone. Thankfully. But we’re planning to ditch the nest (naturally and hopefully carefully) this evening. Fingers crossed.

Update: Mr Wasp was out this evening (at least I believed he was because at dusk his nest appeared to be unattended) so I donned a lot of clothing and closed toe shoes and used a long yardstick to knock the hive to the ground from afar. Nothing flew out of it (it was in fact empty – although I’ll never know if he was just out for a stroll or had abandoned the nest when I removed the alarm signs) so I stomped on it a few times with my shoe. Done-zo. Woot! And yes, I’m feeling pretty tough right now. I’ll keep you guys updated if he comes back (although I think the loss of cover thanks to the missing signs might mean good things for keeping him gone for good).

Here’s what we had going on once I hung just one alarm sign on the base of the post facing the road. If I were an overachiever I would spray paint the mailbox with oil-rubbed bronze paint to get it looking nice and shiny. Someday. And maybe even paint the post something glossy and fresh. Oh and see that birdhouse on the back of the post? A quaint little bird family lives there. They all fly out when we get the mail. So cute. 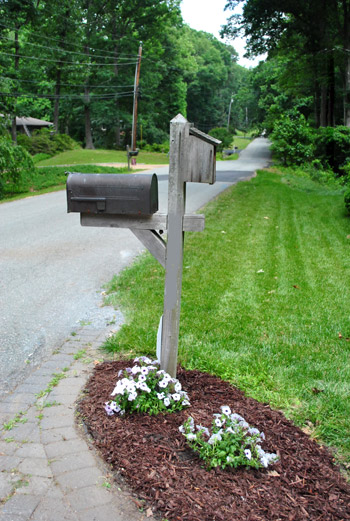 Speaking of cute, you know El Squirrel stuck around right? Here’s Norman living it up among the fresh mulch and happy blooms: 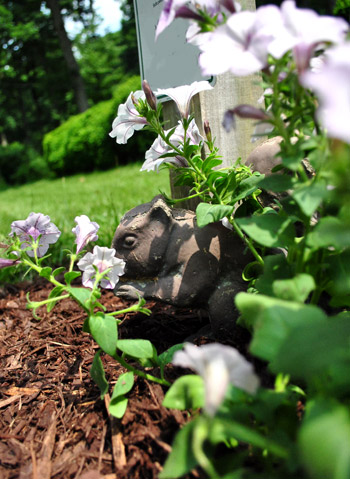 So yeah- we didn’t Curb Appeal The Block, but it’s a quick little upgrade from the embarrassment that was this:

Any other quick yard updates going on in your world? Have you ever used weed-block fabric (it was our first time beyond using it for the patio)? Or found little faux woodland creatures on your property only to fall in love with them? Or come face to face with a bee/hornet’s nest? Spill it.