Well, Clara has officially made the full transition from crib to bed. We never expected her to sleep in her crib for so long (we’ve been “at the ready” with a big girl bed for over a year now, since many of her friends started making the switch back then), but this girl just loves to surprise us and truly adored her crib. And we adored that she was sleeping soundly all night long (even after being potty trained, she was able to hold it ’til the morning). So we didn’t want to rock the boat for all of our sakes, and decided to trust our doc when he said “let sleeping kids lie – she’ll let you know when she’s ready.” 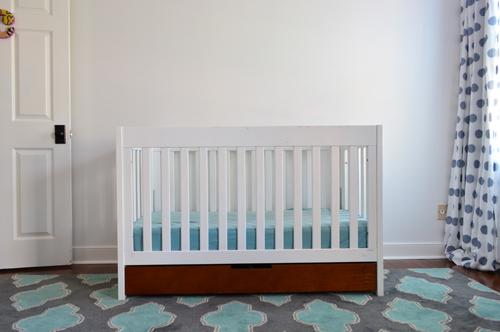 When she started taking “play naps” in her big girl bed, we took it as a sign that she was showing some interest. And then a few real naps followed the play naps, and then she wanted to try her big girl bed out during the night as well, and thus the transition began. Now she’s 100% in her big girl bed (and has been for the last month or so, which is why we’re finally confident enough to make mathematical statements like 100%).

Our biggest fear about the transition was that she’d use it as an opportunity to get up and play at night, or wake us up crazy early in the morning – but she has surprised us once again and has made the switch really smoothly. Except for a couple getting-up-to-put-another-stuffed-animal-in-her-bed incidents, she has slept through the night and through naps without issue. We’re thrilled and extremely relieved. 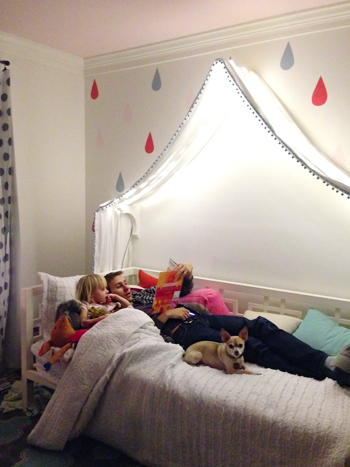 Half of me can’t believe that she was so happy to sleep in a crib for so long, and the other half of me can’t believe she’s now sleeping on a big twin sized mattress every night. How is she not still a tiny infant in my arms? You blink and they’re all grown up. No I’m not crying, there’s just dust in my eye.

The most exciting thing about this development is that we could finally move the crib out of her room. We waited about a month to do this since we didn’t want her to feel like it got ripped away from her the moment she was finished using it. And as we were moving it out, we told her how now it would make more room for fun things. 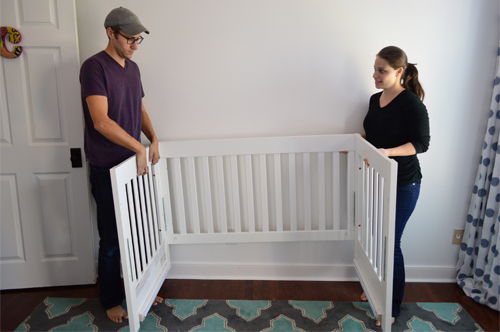 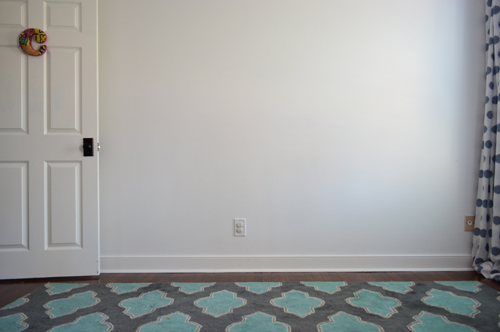 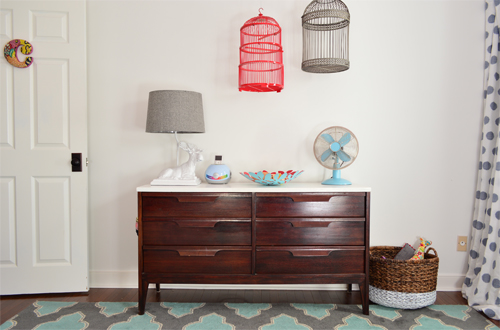 I know, I know – we said “make more room for fun” and then we put a dresser there. But the wall where the dresser used to live… well, we’re working on a complete wall o’ fun for her there. Plus Clara was so excited for us to hang the birdcages from her playroom up above her dresser in its new spot (between the striped toy baskets, the moose lamp, the play table and chairs, the daybed, and the pile of art that we’re planning to hang, this room is turning into a nice mix of stuff from her nursery and her playroom).

It still feels a little sparse though, so I think we might layer in some more art or put something in the birdcages (piles of ribbons? Clara is obsessed with ribbons lately…) so this wall isn’t finished, but I think it’s inching in the right direction. 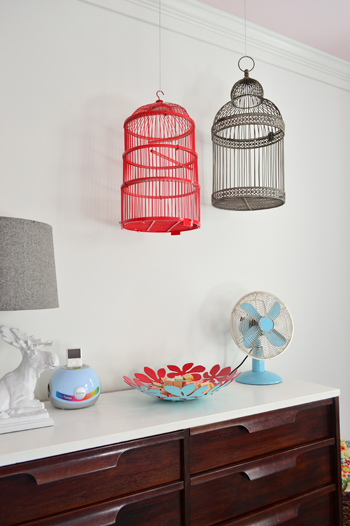 As for how we hung the birdcages, we just used white plant hooks in the ceiling screwed into anchors to hold them nice and firmly up there. And when it comes to their placement, John just held them up and I stood back and said “there – no there! – ok, right there!” and we marked the spots on the ceiling, hung the hooks, and then adjusted the ribbon length on each one until we liked their hanging height. 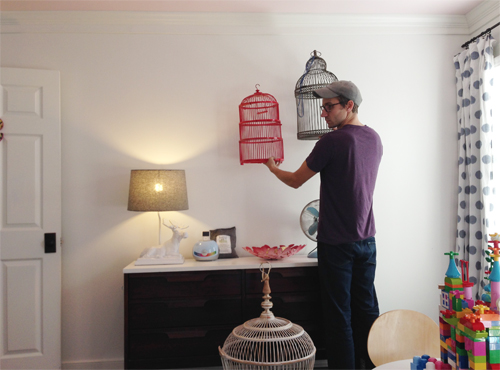 Of course, during the whole get-the-hooks-in-the-ceiling part of the objective, our little assistant was happy to play with the birdcages. At one point she even picked both of them up and breathlessly said “I love carrying birdcages around.” I’d have a picture of that for you, but we were both laughing so hard that we couldn’t see straight. But I did get this one slightly before that moment… 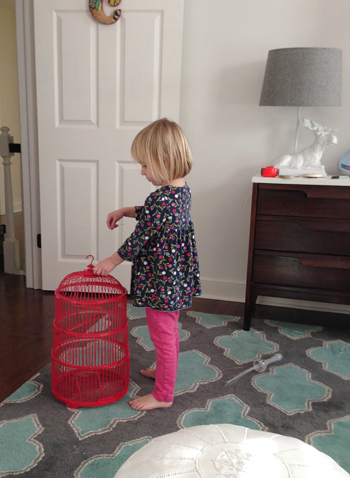 Oh and this can be filed under “small details” but that bowl on the dresser full of blocks always bugged me because while the top of it was all glossy and red (it was originally just a white bowl from Ikea that I spray painted for a book project), the bottom was all splotchy and half-sprayed… which NEVER would have bothered me if it wasn’t visible, but since it has curved sides, you could clearly see the messy underbelly (scroll two pics up to see what I mean). So I finally did something I’ve been meaning to do forever, and painted the bottom a contrasting color. 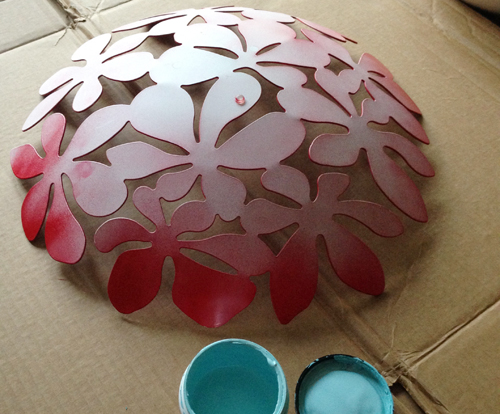 It only took me twenty minutes, and I have no idea why I waited so long. As for how I got ‘er done, I rubbed the bottom of the bowl with liquid deglosser, just to get it paint-ready. Then I used a small brush and a test pot of paint that we’ve had around forever (Embellished Blue by Behr) to coat the bottom of the bowl. The small brush and thin application got me through it without any drips onto the front, and after two coats and some drying time, it was ready to rock out on the dresser again. 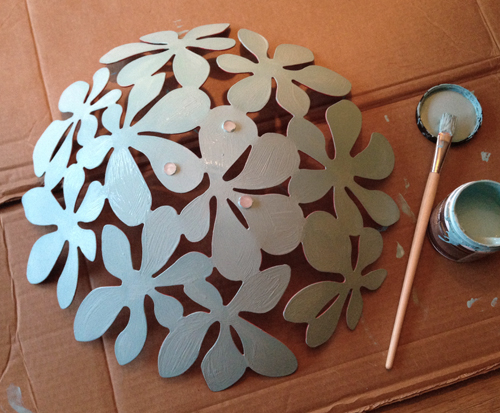 Here’s that side of the room from the doorway now. Oh and see those hooks on the side of the dresser? Those used to hold the wet bags for our cloth diapers, but I strung up two ribbons to hold hair clips for Clara. She likes snapping them off and on, so it’s sort of like a fun new activity for her. Such a funny gal. 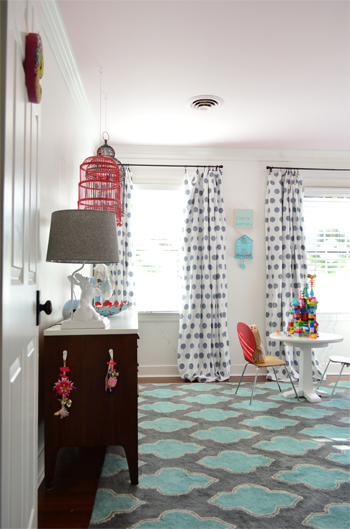 Speaking of funny, it’s funny how you can get so used to turning the corner and seeing this… 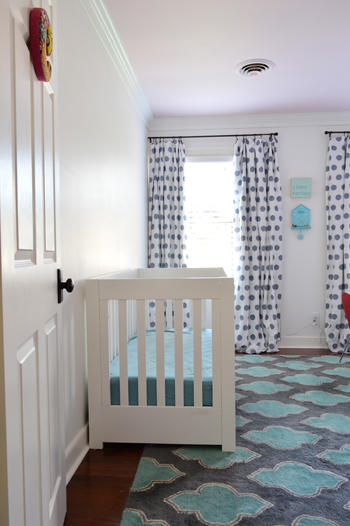 … and suddenly it’s not there anymore.

But the most exciting wall of the room is still in progress (you can see the corners of a few items that we’ve added to the mix on the right of this room shot). I still have a few things to paint/hang/drill, but we’re hoping to have that all done and photographed for you guys on Thursday. 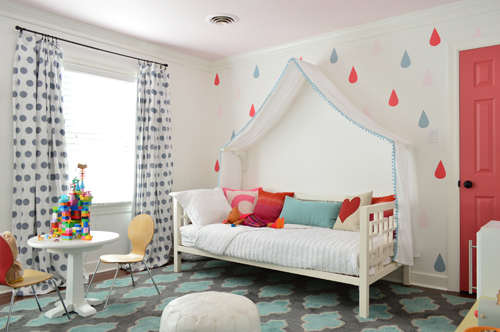 Until then, I’d love to hear about other people’s crib-to-bed switching experiences. Were your kids super young and climbing out of the crib? Is Clara going to end up in the Guinness Book Of World Records for Longest Holdout? Is your son or daughter in a toddler bed, or did they make the switch straight to a twin sized mattress? It’s amazing how kids all move at different paces for things like walking, talking, and bed sleeping (Clara was a really early-talker, but had no interest in walking for a while – and certainly liked her crib more than most). I love that they all move at their own sweet little pace.

Psst- We’re chatting about baby names (and what the bun would have been named if he was a she) over on Young House Life.