Let’s talk more about things that were too tiny. But instead of yesterday’s mini-mirror, this time we’re taking things outside. To the carport to be exact. See that tiny little lantern hanging from the ceiling? 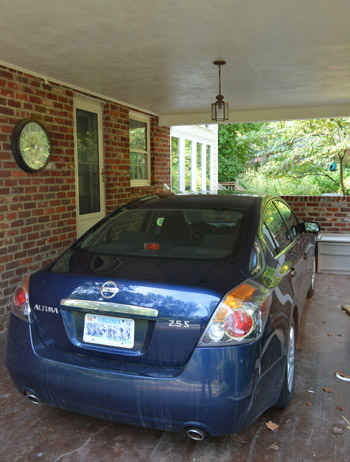 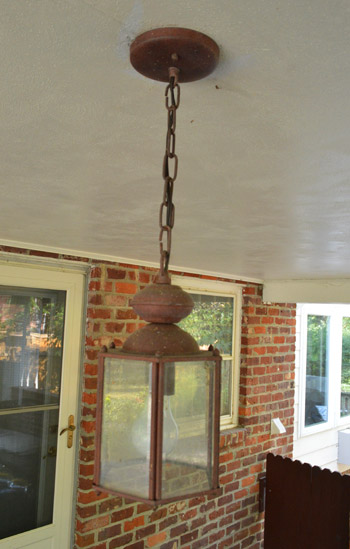 So we’ve been keeping an eye out for a larger light since we moved in back in late 2010. You name it, and we’ve looked there (at stores like Home Depot, online, on Craigslist, at local outlets and secondhand stores like The Habitat For Humanity ReStore, etc). Ideally we wanted a big chunky clean lined lantern in a rich dark oil-rubbed bronze finish and a price tag that didn’t knock us over (we saw a few that we loved, but for the jumbo size that we wanted, they were two hundred big ones). And it had to be made to be outside since we wanted it to hold up and not get all rusty or be unsafe (things outside have different UL listings for that sort of use, so using an indoor fixture outside can be a fire hazard).

But finally, as if by some miracle, after over a year of looking we came across this guy at a local lighting outlet (The Decorating Outlet) which is one of about ten places that we had been dropping in on every month or two, just to see what popped up. 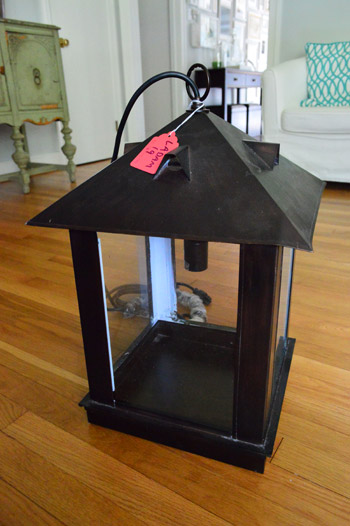 And by some even larger miracle, this lantern was majorly marked down. Yup, the original price of $295 was slashed and then $159 was written and then that was slashed and a giant $19 price was drawn on in marker. Now we’re talking, right? That’s over 90% off! The reason? It was missing the ceiling canopy. No biggie, those are $6 at Home Depot or Lowe’s in the same dark oil-rubbed finish, so that definitely wasn’t a deterrent.

The other defect? The outside of the lantern has four panes of glass, and one of those four panes was actually missing. The funny thing is that we didn’t notice the entire time we checked it out (and we were holding it about a foot away from our faces). So we knew once it was hung over seven feet from the ground no one would ever be able to tell. Especially if we hung it so that missing pane faced the side of the carport with the wall of bushes (you approach the space from the front, and there’s a door on one side and a gate off the back, but no one ever walks towards the carport from that wall of bushes). And if it ever really bothers us we can get a new pane cut for it at a local glass store (if we have issues with bugs & birds trying to nest) for under $15, which is still way cheaper than the full price. The bottom of the lantern also slides out so we can keep that part removed so bugs don’t collect in there. Such a convenient feature!

As for hoisting that baby up, it definitely was a two person job (I held it up with both hands while standing on a ladder and John connected the wires – with the power off of course). Here’s a terrible photo I snapped while holding the lantern with one hand and the camera with the other while teetering on the ladder because I love you guys. 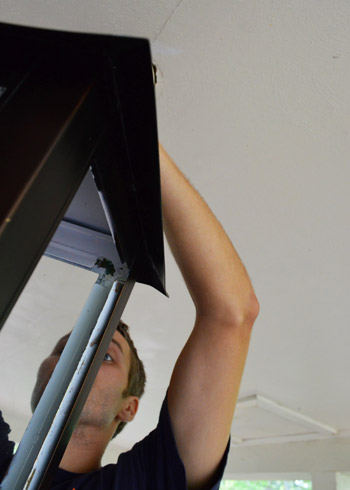 Oh and before we settled on our hanging height, we measured our friend’s big SUV (just to be sure we left enough clearance room for taller cars and not just our short little Altima). Thankfully the carport is super high (over nine feet), so it can still have a bit of drop to it for that fancy schmancy lantern feeling (we didn’t want the top grinding up against the ceiling or anything) with loads of room even for tall trucks/SUVs to pull in under it. 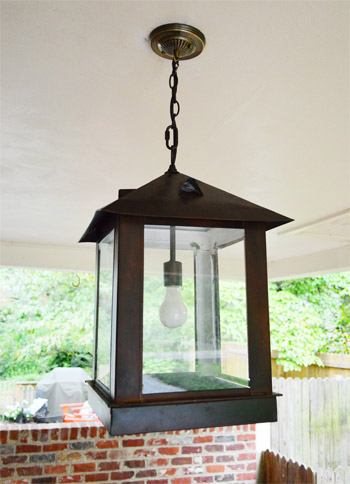 So much better, right? We’re digging him. In person he just feels so much more in proportion to the wide open carport and the rest of the house in general. As a source of comparison, here’s the old guy… 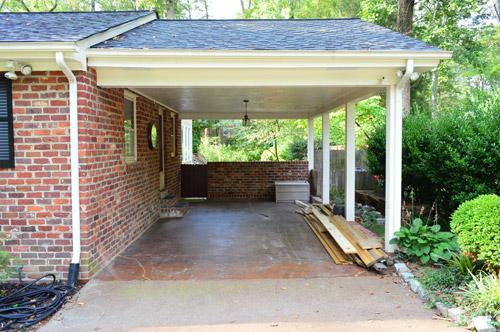 And here’s the new lantern, holding things down… 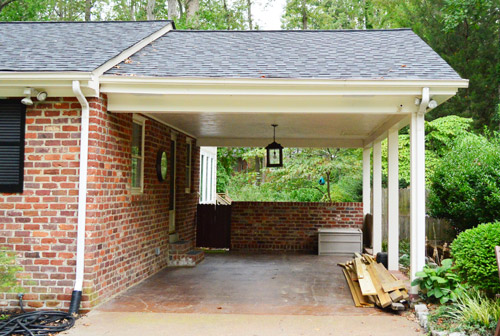 Don’t mind that pile of wood on the right. Blame it on the de-eh-eh-eh-eh-eck-pro-ject. That doesn’t have the same ring to it, does it?

Old guy from further away… 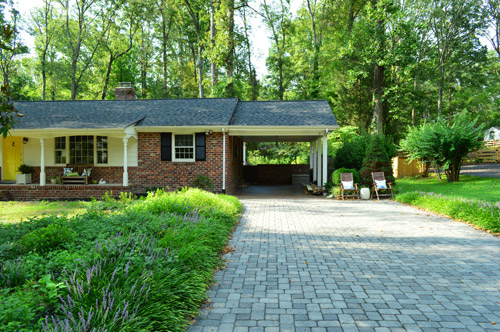 And the new guy… 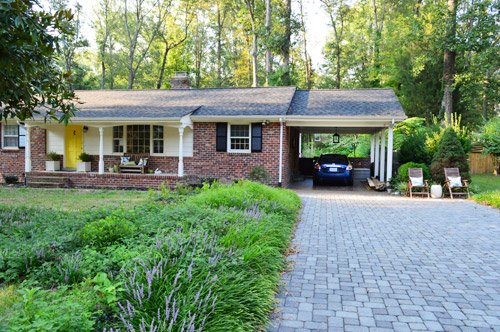 Purty cute. Not exactly easy to see from the curb since our house is set so far back… but no longer invisible! Woot!

It’s just one of those proportion things. A giant high-ceilinged space with a tiny child-sized lantern can leave a bit to be desired (seriously, it was the size of one of these little metal tea-light holders that Ikea sells for $3.99). So nineteen bucks later ($25 if you factor in the canopy we added) we ended up with something that’s not only an upgrade from inside of the carport, but it’s actually a nice crisp and updated look from the driveway and even from the curb (now that it’s to scale with the house and you can actually see it). Huzzah! 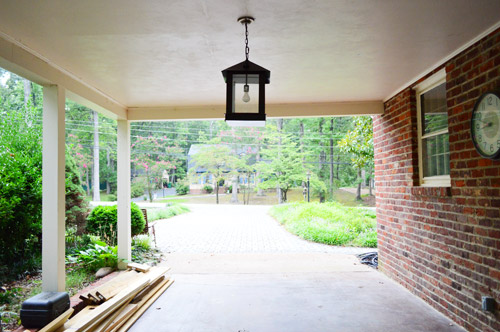 Oh and although I pointed out how doubly-miraculous it was to finally find this lantern, which was thankfully the right size and the right price, the true lesson is probably that if you look long enough for something (over a year!) and resist settling for something cheap but not pretty enough (or pretty but not affordable enough) you’re probably likely to come across something sooner or later (and I guess over a year definitely falls into that later category). So don’t give up. Also, eat Oreo’s. They fill the hole in your heart until you find the ambiguous item you’re searching for. 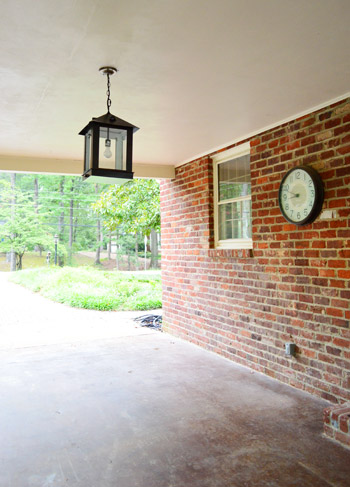 Even though we eventually have plans to convert the carport into a garage, we think we’ll still definitely appreciate having a light that we control with a switch that feels nice and stately.

Oh and here it is with our car back in there, just for comparison (and to show you guys there are still over two feet of space for a taller cars like SUVs – I promise we measured and all is good). 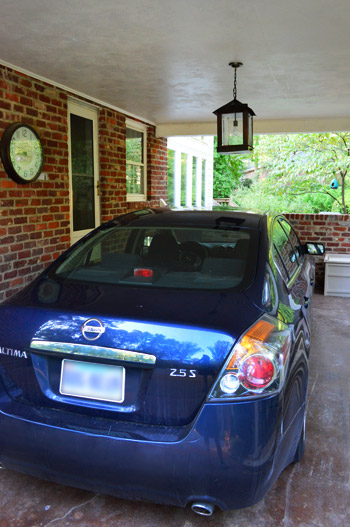 Doesn’t it just feel more substantial and balanced than this old picture with the car in it from the same angle? And you can see from here that although the new lantern is a lot larger, it only hangs about 4″ lower than the last one did (use the ceiling line in each pic for comparison). So it’s not like it’s danging a foot and a half lower or anything.

So that’s our little lighting/carport upgrade. Any other light switch outs going on? Have you been hunting for something for over a year that you finally got your mitts on? Was there a funny reason why it was on sale? Did hanging it involve two of you teetering on a ladder, silently cursing the day you found it until you got it up and permasmiled with relief?

Trading Our Too-Small Mirror Over The Mantel
Reader Redesign: The White Stuff