Sometimes I go crazy and I demo stuff without really thinking too hard about what I’ll do after the demo dust clears. See, for some reason when I stopped and stared at all those crazy towel racks in our hall bathroom for the five hundredth time… 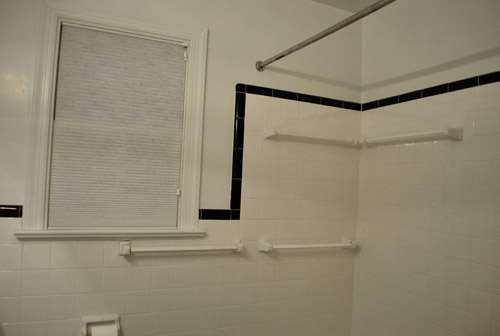 … I decided it was time to get the hammer and take a stand. Because who really needs that many towel bars? And who decided to put that one on the left so crazy off-centered below the window so it would protrude halfway out of the shower curtain? Especially when there’s room for a cute little hand towel ring on the un-tiled wall next to the sink near the doorway.

Can you tell that wonky half-under-the-window towel bar especially bugged me? Yeah I took it personally. So I took a minute to inspect the towel rods and decided that the ones in the shower weren’t that bad since they’d be hidden by a shower curtain 99.9% of the time (once we actually hung one). And I noticed that they all seemed to be adhered on top of the tile instead of inset in it (meaning if I could carefully chisel them off I might be able to save the tile under them for a completely seamless look). So I decided to say goodbye to that annoying off-centered bar under the window first. You know, since he was my least favorite towel bar in the history of the universe.

I very carefully chiseled it ever so softly with a flat head screwdriver and a hammer. Tap… tap… 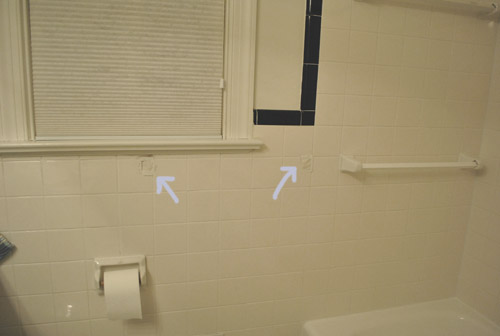 … crap. The bar holders came off pretty easily. But they weren’t stuck on top of the tile like I hoped. They were inset. Boo. So I was left with two highly visible boo-boos that looked a little something like this: 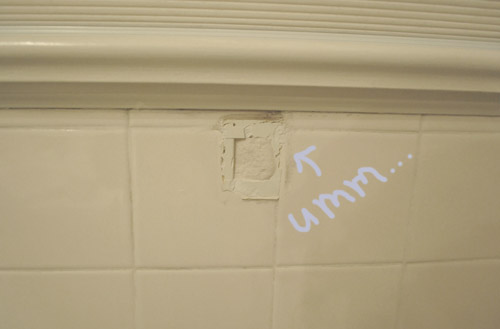 Cue the nausea. John didn’t even know what I was up to (surprise). I was banking on a “look what I did – doesn’t it look better?” reveal. You know, as opposed to an “oops I ruined the original 60’s tile that we definitely planned to work with” reveal.

But as I stood there picturing baked potatoes (an insane anti nausea method that I honed during 100 straight days of morning sickness while prego with Clara) I assured myself that we could probably semi easily hunt down two replacement tiles and just Dremmel out those ruined ones for a pretty flawless repair. But the longer I stared at my mistake, the more I realized there was a much easier fix. At least for one of the holes. Let’s rewind a little. Look closely at the window. Do you notice anything odd about it?

Why was there trim around the sides and the top, but not along the bottom? If we added some simple white wood trim down there it would probably look a heackova lot more balanced and it would cover one of my two glaringly obvious tile gaffes. We had also been meaning to hang the shower rod up near the ceiling with another one of our favorite super long 95″ waffle shower curtains, which would end up draping right in front of the other tile hole (yes, “tile hole” is a technical term) and completely obscuring it whether it was open or closed (since we push it towards the window when open, so it would still hide my dirty little tile secret in the open position as well as the closed one). Although it’s not a forever solution like adding trim, it’s definitely a will-do-until-we-find-a-matching-tile-later solution.

So I sheepishly padded down the hall wearing my best oops-I-went-crazy expression (humming “Oops I Did It Again” for effect) and requested some help adding “a tiny bit of trim and re-hanging the shower rod at ceiling height” so I could string up our new 95″ curtain (we ordered it from amazon.com a while back but hadn’t hung it yet). John was the man. He was pretty quiet (a sure sign that he wasn’t exactly ecstatic) but he didn’t give me the stink eye or anything. Instead he got to work fixing my mess while I stood in the background holding the baby and flattering him with stupidity like “you look great in that hat” and “nobody hangs trim like you, babe.” I managed to even get a little smirk with that last one. As for what John specifically did, first he removed the tiny piece of faux trim that looked sort of like shoe molding under the windowsill by prying it out with a flat head screwdriver (a mini crowbar would also work). 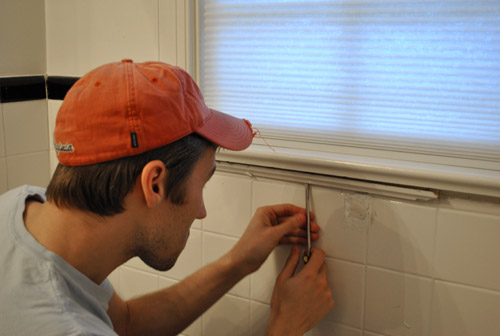 Then he cut a piece of trim that we already had in our scrap pile by looking at other windows in the house and mimicking the shape (straight down on each side with a small 45 degree diagonal bottom corner cut which he made using a miter box). He attached it with small finish nails which he hammered in at an angle towards the sill, using a small metal nail punch (which drives the nails in while keeping the trim from getting dented by the hammer). 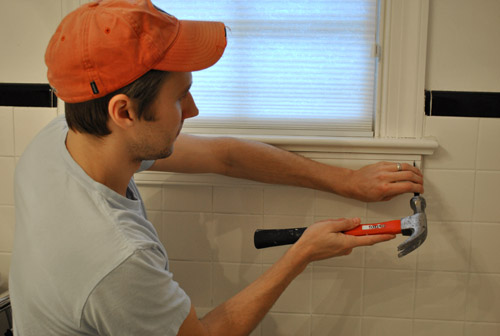 About twenty minutes and zero bucks later any evidence of my moment of madness was completely unidentifiable. And we were left with this (I even painted the new trim piece with leftover trim paint that I found in the basement thanks to the previous owners): 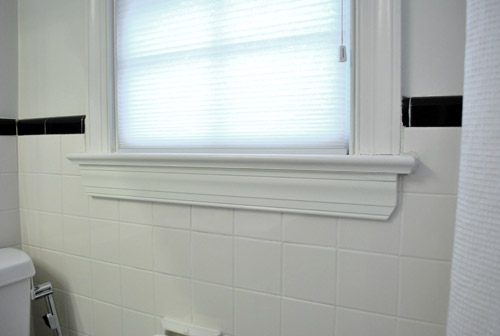 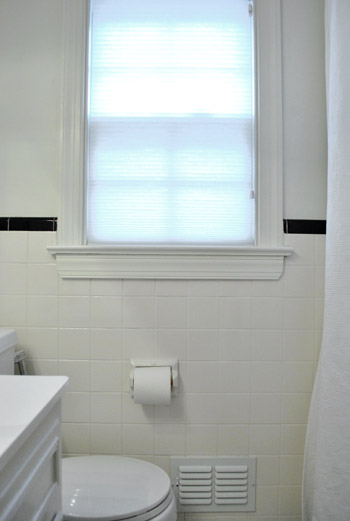 Oh yeah, and if you wonder why this next picture is so white, John took it. And he remembered to white balance first. See, sometimes when I’m going crazy and demoing something I forget to white balance before taking pics. I contend that this is an honest mistake. I mean in a state of demo mania, you can hardly be expected to remember how to use the complicated camera, can you? Anyway, the shower curtain and tile is pure white (along with the walls, the sink, the toilet, etc) so this shot’s coloring is the most true to life: 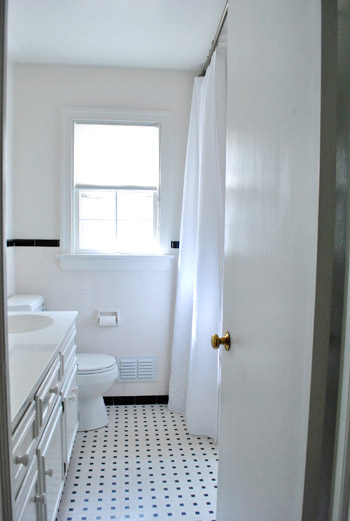 I know it seems like a stretch to act like my big tile “incident” was a good thing. And I might be in complete denial. But I think the window looks a lot better with that trim on the bottom, so that will definitely stay for life. And of course the whole “hide the other tile hole with a shower curtain” isn’t ideal, but once we hunt down a replacement tile it’ll be fixed for realsies. Best of all, our bathroom no longer has that crazy off centered towel bar that annoyed me from the hallway every single time I walked by. And I ask you, who the heck would want their hand towel grazing the toiler paper dispenser anyway?

I rest my case. Hooray crazy.

Psst- Wanna know what that silver nozzle next to the toilet tank is? Check this out.

Psssst- Clara is officially less than two months away from her first birthday. Crazytown. Which means we’re starting to think about how we’ll plan her cute little DIY b-day party. We’re spilling a few of our just-starting-out ideas (and sniffing around for not-your-first-birthday-rodeo advice) over on BabyCenter today, so feel free to drop in and sound off.

Come To Momma
Another Round Mirror