Ever since we saw an image on bhg.com a few months ago with open shelves and baskets, we started thinking about taking the door off of our bathroom’s linen closet. We realized that a few chic baskets could convert our claustrophobic closet into clean and functional open shelving (by now you know we’re crazy about open living). And then when we crashed Lesley & Jeff’s fabulous home, her doorless bathroom closet sealed the deal: 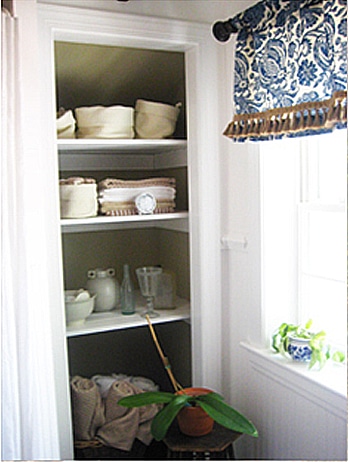 But first some photographic proof as to why our current closet door situation was so not working for us. Check out the serious door war that regularly occurred between the linen closet door and the bathroom door. Argh! Talk about a design flaw. 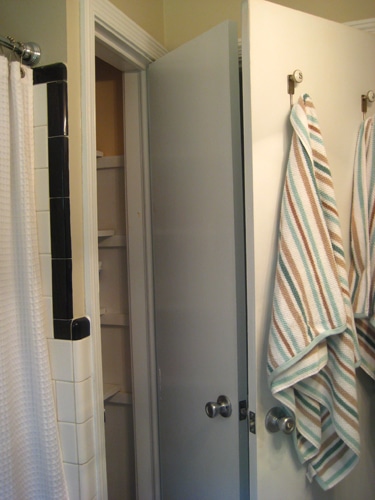 So one day while John was sittin’ pretty at work, I took a screwdriver, a hammer and a crowbar to the door and off it came (along with the door jamb so that the opening looked a lot more like a built-in shelving nook than a doorless linen closet). 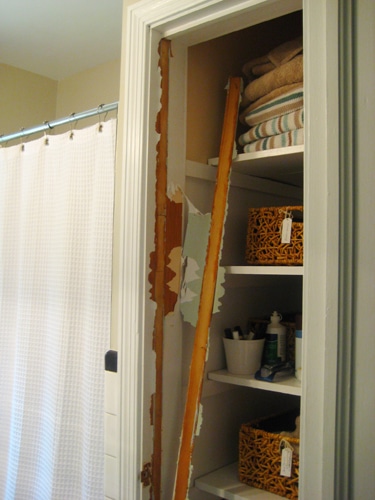 After we erased any evidence that a door once existed (by caulking the hinge holes and removing the door latch) I extended the bathroom’s soothing tan wall color into the nook (Glidden’s Sand White) and painted the door frame and the shelves a crisp glossy white. 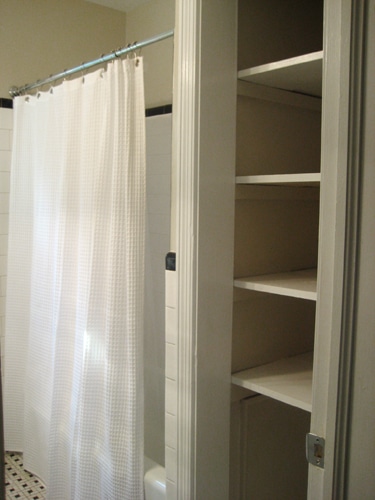 Then I just reused the baskets that already housed our sheets and towels and introduced some other creative storage solutions from a few objects that we had laying around the house (two cheap white Ikea planters for nail polish and toothbrushes). Even the toilet paper looks great in its newly spiffed home. 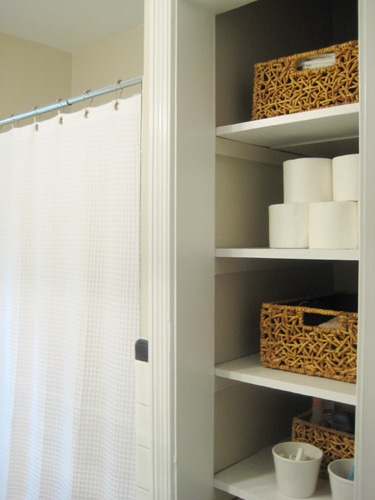 But the entire project wasn’t entirely free, we did splurge on two bigger baskets (for a few more towels) to stack on the floor of the closet. Luckily we scored ’em at Michael’s for 50% off, so we basically got two large rectangular woven trunks for the price of one (25 measly bucks total). Not bad for the entire bathroom closet project. 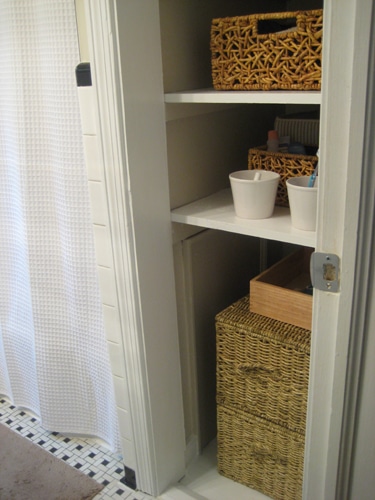 So what do you guys think? Could you live with an open linen closet or do you think some things are better left behind closed doors? And don’t worry, we’re totally aware that we’re waaay more into open storage than the average bear. Luckily we’re also waaaay more compulsively neat than the average bear (to a somewhat insane degree) so it’s perfect for us. Whatever works, right?

How To Upholster A Chair
Wedding Crashing: An Elegant Affair