Sherry and I were excited when we first laid eyes on our house’s sunroom. We were actually grateful for the barely budge-able glass sliders and the damp carpet because the sellers positioned this house as a real fixer upper, and we knew the raw state of this room was one of the things that put it within our price range. 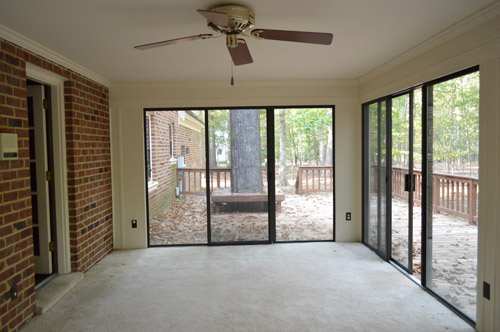 When it came to brainstorming what we thought we could do with it, I had deja vu for our first sunroom, which we made over with some floor & ceiling paint, sheer curtains and some cozy furniture. My mind used that to fill in the blanks as to what this new sunroom could become. 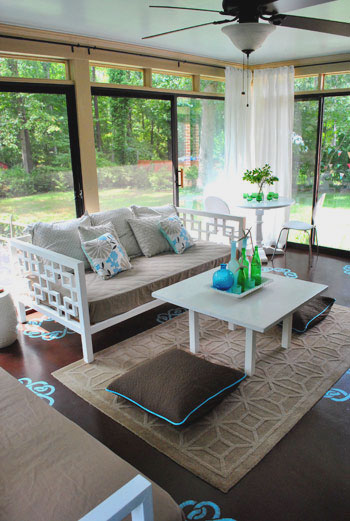 And although so far we’ve only so far removed the carpet and plopped some furniture down randomly, I could already feel us heading in that direction… 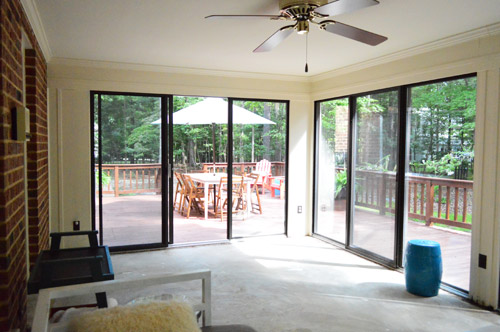 But Sherry had a different vision. She honed in on a key difference between those two sunrooms: this one was surrounded by a deck on all sides. And those broken doors – in particular the two sets on the long wall that we literally couldn’t slide at all – were a barrier to us enjoying this outdoor space to its fullest. 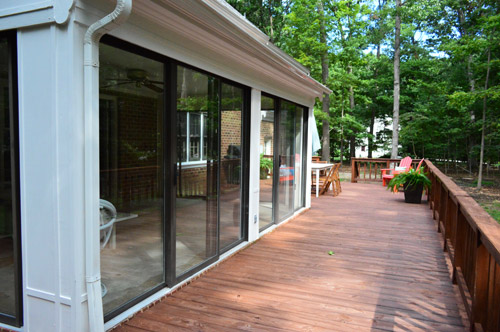 So she wanted to take ’em off. Leaving something “open and glorious” (to borrow her words) – like a covered porch complete with an outdoor rug, vaulted ceiling, and a tiled floor. Something decidedly less like a big fishbowl tacked on to the back of our house. 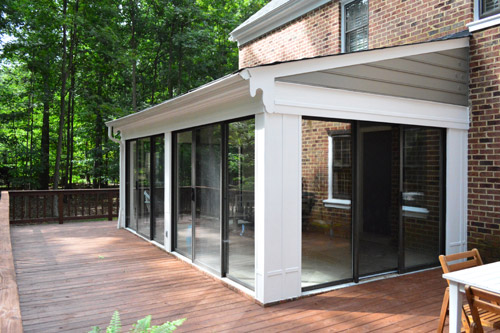 I was nervous and unconvinced (like I am before most big undertakings). What about in the winter? The drafty glass doesn’t keep it warm enough for winter use anyways, Sherry reminded me. What about bugs? We used to leave the sliders wide open in our last sunroom with the fan running and no bugs wanted anything to do with us thanks to the moving air. But, um, is this sort of covered porch a thing people do?

Then Sherry showed me this image.

Sure, we don’t have a fireplace (although maybe we could add one someday…) but that picture had me sold. Heck, it even got me excited. We’ve used this deck more than any other outdoor space we’ve ever had, mostly because Clara enjoys playing with her baby pool and water table out there. And I realized this change would only make that time better. We could still retreat to the shade of the sunroom and the breeze of its fan, but we wouldn’t feel so closed off from the outside. 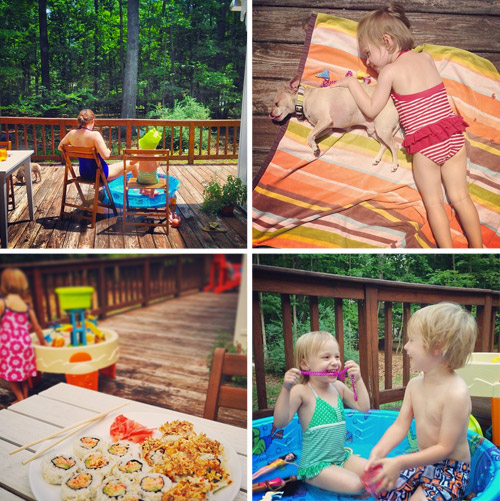 But enough talking. Let’s get down to business. Taking the sliding screen and glass doors off was a cinch. The glass door was heavier so it took a bit more oomph, but I just lifted them both slightly and tilted them off their track. 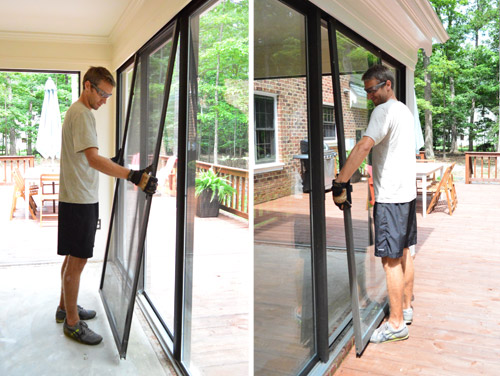 Honestly, the toughest part was carrying the glass out of the way. We piled them up beside our garage (Habitat for Humanity is coming to pick them up next week since the slides are the only broken parts, so the doors and screens themselves are in great shape to be donated). 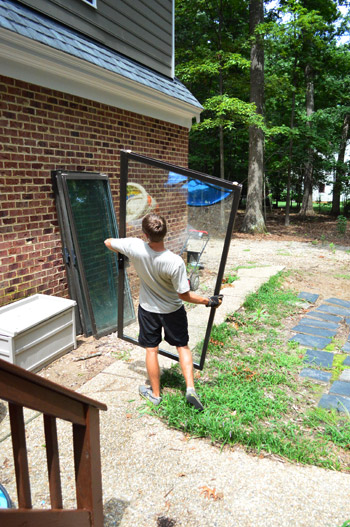 Next I had to remove the frame pieces that kept the glass doors on either side from moving. This involved some unscrewing, a bit of prying and even some light hammer taps, but it all came up pretty easily overall. 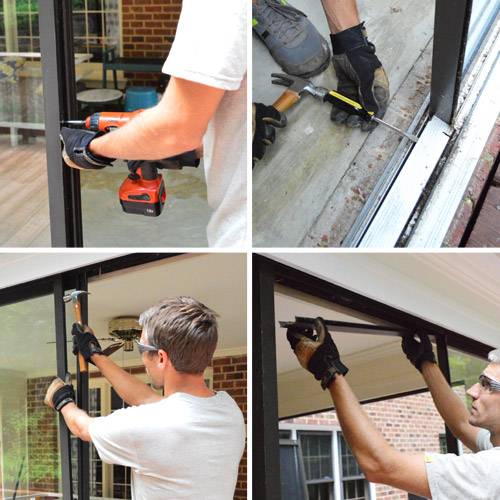 With the inner frame gone, the two stationary panes on either side came out just like the sliding door in the middle. A little lift and tilt, and out they came. Although from years of not having budged, they took lots of oomph. 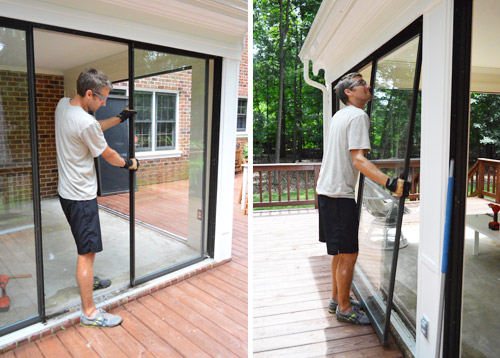 Removing all of the doors (12 glass doors and 4 screens) probably took me about two hours (excluding photo taking time). And as each one came out, I was able to see Sherry’s “open and glorious” vision become opener and gloriouser (?). Part of me wanted to stop and just kick back with a tall glass of sweet tea for the rest of the day. 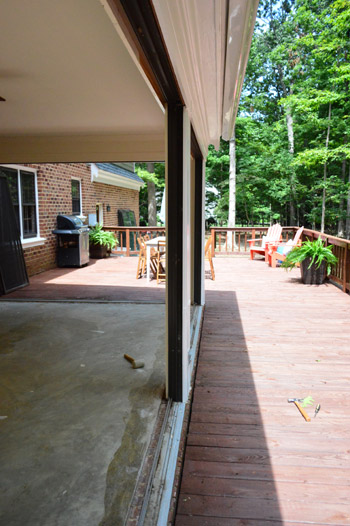 But demo was not done. Each doorway still had the metal frame around it that was a bit of an eyesore (and the bottom piece was a major tripping hazard). So after removing a few dozen screws and prying a bunch of metal free from caulk with several tugs and twists, the frames came out. 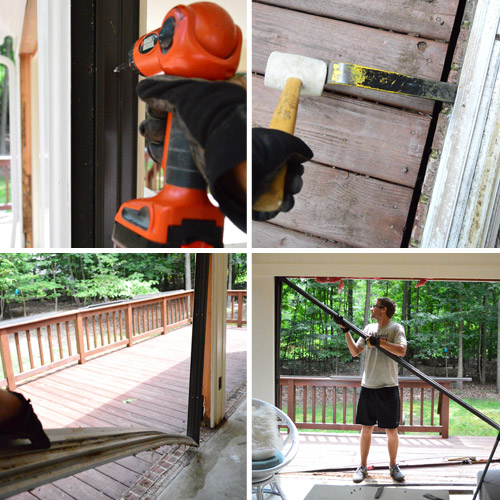 This process took me about two more hours. I admittedly wasn’t really doing it the “proper” way – which would’ve been to remove all of the wood trim around the doors in the sunroom and (theoretically) slide the frames right out with ease. But some of the frames were so warped that I wasn’t sure they’d easily slide out even if I spent hours ripping off all the trim first. So I just kind of manhandled my way through it while keeping the trim in place. There was some twisted metal to show for it, but it did the trick. And since we couldn’t donate those frames since they were the broken parts of the doors anyway, it all worked out. 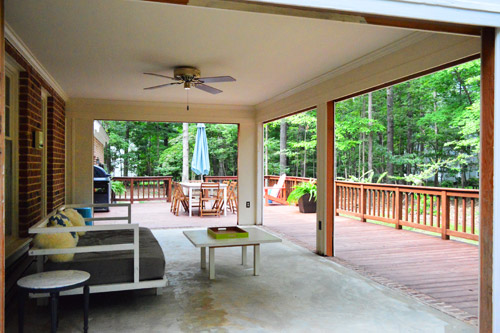 There’s still a long way to go (more on that in a second) but we’re both CRAZY excited about the change. I wish I could convey how liberating it is to walk freely between these two spaces now, no longer having to wrestle a stuck door to do so. I feel like we’ve reclaimed a whole portion of our deck that we previously didn’t touch because of the wall of immobile glass. 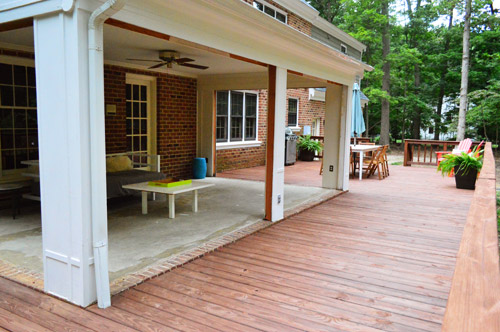 We joked that we should start calling it the “veranda” to mark its evolution from the typical sunroom that we’re used to. And perhaps that fancier term will lend a sense of polish that the space will lack during this in-between phase. We just have to remember to say veranda, and not verdana (which is a typeface, not a covered porch). 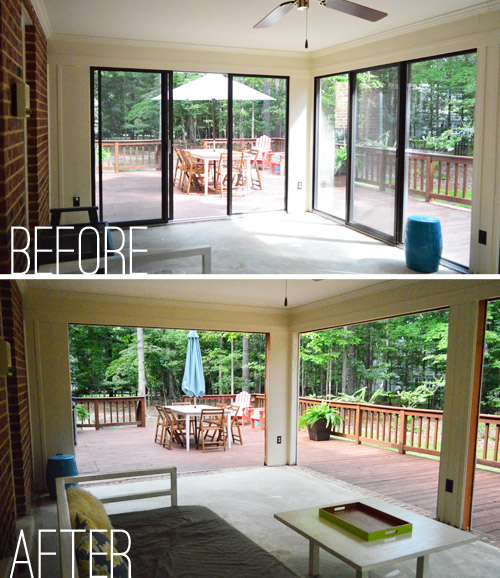 So it looks like this’ll be our first big makeover here at the new house (aside from laying all of that hardwood flooring upstairs before moving in). As usual, we’re planning to tackle it in nice bite-sized steps – and hopefully we can knock a lot of it out before the temperature drops too much. Here’s the tentative plan:

Oh, and one last minor thing that we took care of right away was to swap out all of the outlets for covered outdoor outlets. Don’t want rain shorting out any electrical stuff in there! Thankfully the walls aren’t drywall (they’re all wood painted with exterior paint) since we believe this room was once a covered porch before someone made it a sunroom – so when we add that casing to the door openings and caulk everything, the room will be all sealed up and weather resistant again. 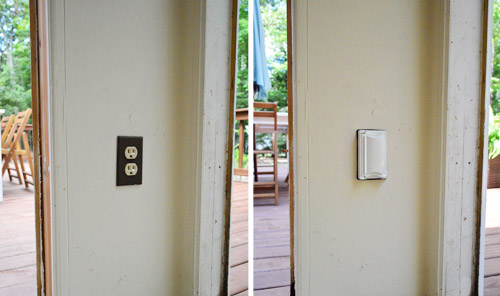 Psst – Cassie over at Hi Sugarplum played 20 questions with Sherry, so you can read all about her weirdest quirks, her current cell phone ringtone, and her favorite Halloween candy.