Progress has been made in the guest bathroom, folks. Which is good news since we’re less than 30 hours away from the arrival of Sherry’s mom and stepdad. Our first score was finding a shower curtain. Despite being burned by pattern in our last shower curtain attempt, we bought this guy at Target on Friday for about $20. 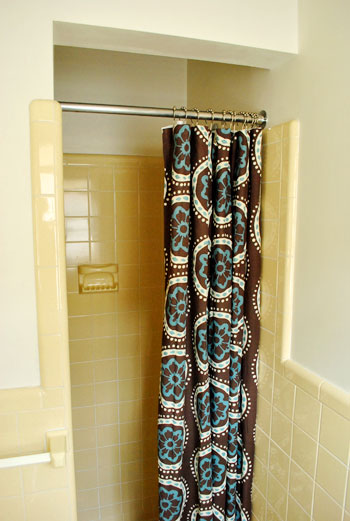 It definitely still looks kinda rough in there (still have to paint the walls and hang art, but we don’t think we’ll get to that before the inlaws arrive, uh, tomorrow). But getting back to the shower curtain, we think the pattern works much better because it’s bigger when it comes to the scale. The large medallions don’t compete with the tiny square tile on the walls and floor like the smaller scale yellow pattern in the last one we grabbed. The dark brown also introduced some nice contrast since the yellow tiles and off-white walls were sort of washing out the rest of the space. And because our old guest room bedding – which we plan to reuse – includes brown & white, while the walls in there are blue, this curtains sort of ties things together. 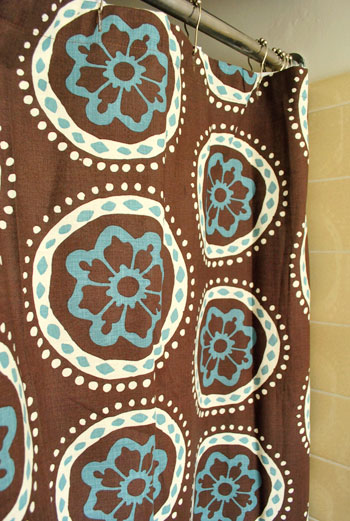 Then once we had the curtain finalized (and picked up a cheap white fabric liner to keep this guy from getting drenched, also from Target), we turned our attention to the bathmat – or the lack thereof. We originally brought home a brown one that matched the curtain but it was waaaay too dark. And walking into a bathroom to see a big brown spot on the floor wasn’t the most, um, clean looking choice.

So we went back to Target and picked up three other options for a little bath mat fashion show (Sherry may or may not have clapped and chanted “fashion show, fashion show” as we made our purchase). First we tried this square one that almost blended right into the floor completely. 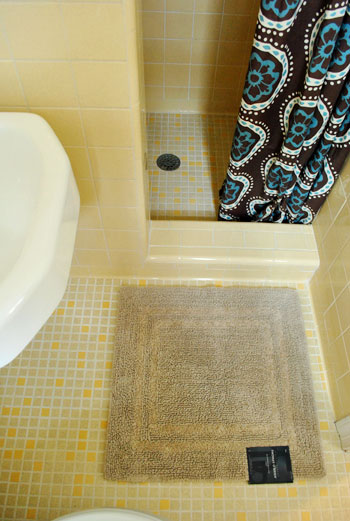 No dice. It just looked kinda dirty and blah.

Our next choice was the polar opposite. We decided to try a more colorful rectangular mat to pick up those blue tones in the curtain (and the adjoining deep teal guest bedroom). 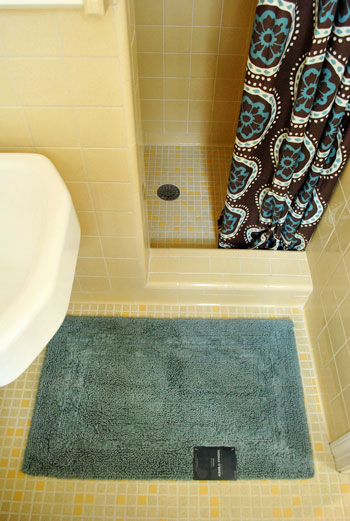 We didn’t really mind this one. It matched the curtain nicely and certainly would help us achieve our goal of bringing more color into the house.

But when we saw the third option we knew it was “the one.” It just felt crisp and tailored without being matchy-matchy. The stripes are a fun counterpart to the circles in the curtain (the white and brown tones in each one keeps them related in a fun mixed & matched way). 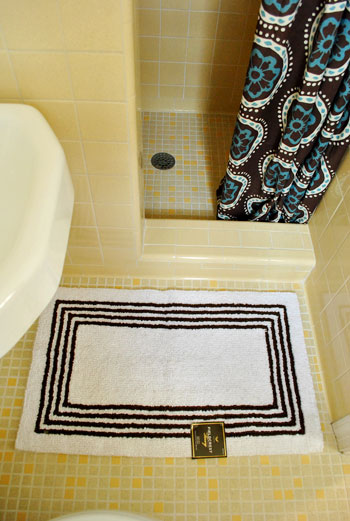 What can we say? I guess even though we’re embracing more color, we’re still suckers for crisp white stuff from time to time. Especially with there’s a white toilet, sink, and mirror in there (so it automatically ties right in). I guess when it comes to bathrooms, nothing beats clean white linens for us (99.9% of hotels that we’ve stayed at always have plush white towels and bathrobes, so we want our guests to feel like Casa Petersik is just as spa-like and inviting). Long story short, we had a bath mat fashion show winner. So we hoisted it up and sang For He’s A Jolly Good Fellow, removed the tag, and returned the others.

We also accomplished a few hardware updates yesterday. The most needed of which was a new toilet seat, since the old one boasted several chips in the lid and tears in the soft seat (and we’re not really fans of the soft toilet seat thing anyways). Here’s the least offensive shot of the old toilet seat that shows off some of those chips on the lid. We refrained from sharing the open lidded shots since we know some of you eat breakfast slash drink coffee while reading. You’re welcome. 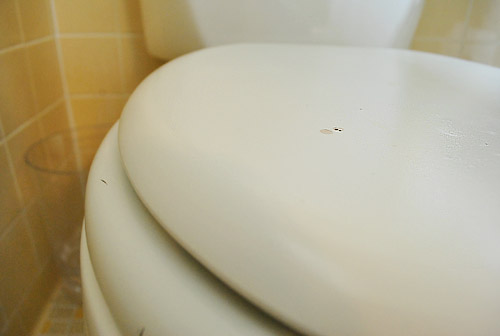 Replacing a toilet seat isn’t rocket science, nor is it a very glamorous job. But I did my best to enjoy the process, and even flashed a thumbs up at the wife as she snapped this pic. 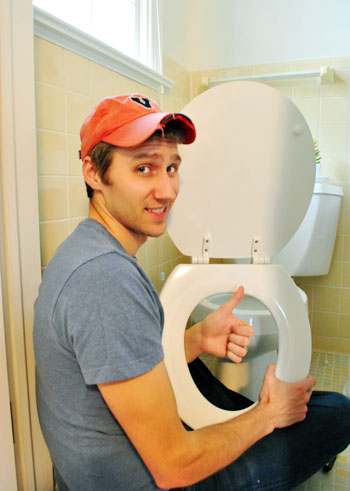 The whole switcheroo brought back memories of when I used a toilet seat for a 9th grade science project where I had to illustrate the anatomy of a mollusk (i.e. clams). In case you were wondering, toilet seats take well to dry erase markers. Yes, I really am that dorky. Go Team Mollusk.

We also replaced the old rusted shower head. It functioned just fine (the water pressure was great and there were thankfully no leaks to deal with) but it just didn’t look very nice. 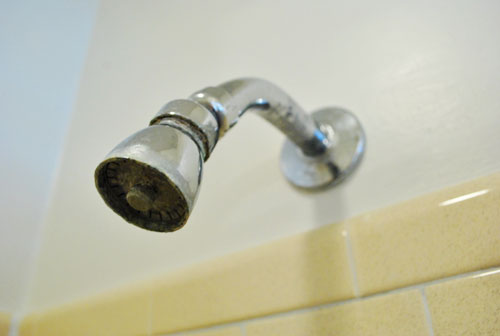 So we sprung for the cheapest multi-setting shower head at Target (it was $14) in an effort to fancy things up a smidge. 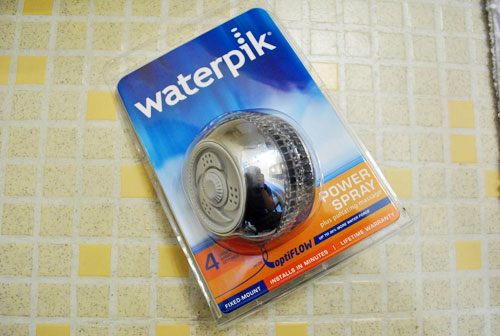 And after using some serious elbow grease to get the old one off, the new one went on within 60 seconds. So shiny, right? I can even see myself in it. 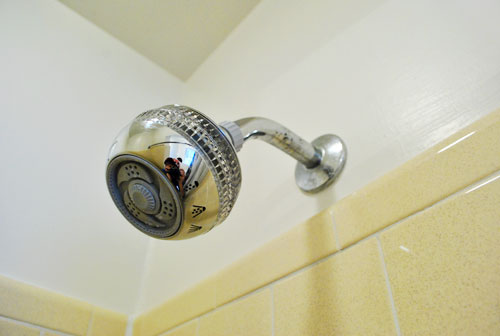 Speaking of being in it, I actually took the shower for a test run shortly after this installation. I figured if anything weird or gross was going to happen in the first use of this shower, I wanted it to happen to me and not my mother-in-law. Fortunately things were all good. In fact, the water pressure is better in there than our bedroom. Lucky guests.

Last but not least was a quick zero-cost change. After removing the mirror on inside of the bathroom door (awkward!), we realize we were missing towel hooks… ’til we discovered them on the other side of the door while painting this weekend. Seriously, in the two months that we’ve lived here we never once closed the door to the guest bathroom to discover those towel hooks hiding back there until a few days ago. So I just unscrewed them from the back and reattached them to the inside of the door where they’ll actually be seen and used (and Sherry spackled and painted the leftover holes on the lesser seen back side of the door). 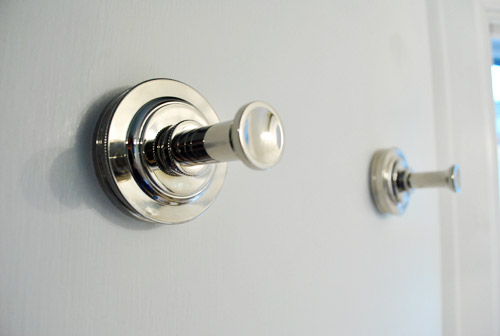 We’ve still got a few other things (like towels, and maybe some art) to make the room look more complete and guest-ready, but at least it’s completely functional now. Stay tuned for pics of the whole room after Sherry gets her kicks by adding a few accessories. And we still have to share our progress in the guest room. Which we’re most likely working away on as you read this post.

In the meantime, have you guys made any recent bathroom upgrades? Or do you have any tips to share about how you get a guest bathroom ready for guests (besides buying some shampoo, conditioner and toothpaste – which is already on our to-do list along with fluffy towels and a few washcloths)? This is our first time having to furnish a devoted guest bathroom that we don’t regularly use ourselves, so we’re definitely feeling kind of JV about the whole thing.

Our First Time Shopping For A Mattress: What We Learned
Guest Bedroom Progress…