Let’s take some shelfies. You know, as opposed to selfies. 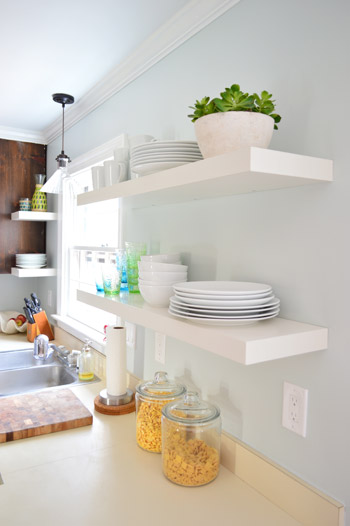 If only we had Beyonce around to photobomb them, they’d be the best shelfies ever… 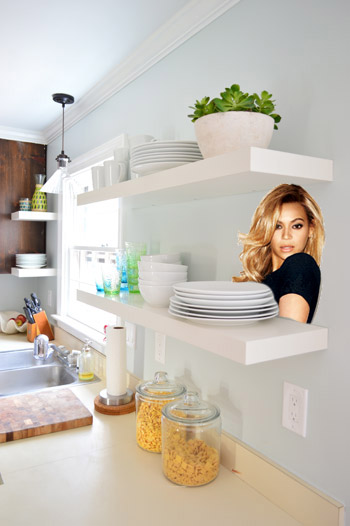 The no-Beyonce consolation prize is that we finally got the Ikea floating shelves up in the kitchen, and it suddenly feels like we’re turning a corner. We still have a few major things on the list (like painting those cabinets) but the shelves make such a gigantic difference as opposed to the dark cabinetry that used to hang on either side of that window. Here’s how it looked a few weeks ago after we removed the wallpaper. 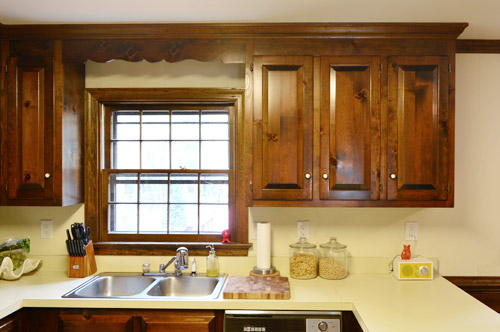 And here it is from the same POV now, after removing the cabinets, re-hanging the crown molding, patching/priming/painting the walls, trim, and ceilings, upgrading the lighting, and hanging those new shelves of ours. These pictures don’t even do it justice – it’s literally at least twice as bright and feels a lot bigger and more open as well. 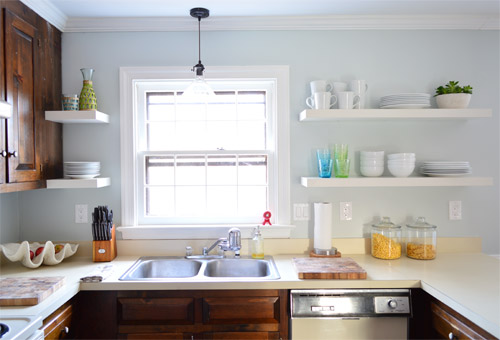 When it comes to how we hung them (they’re lack shelves from Ikea), we decided to line the bottom shelf up with the cabinet on the left of the shot above (18″ above the counter) so that they all related to one another. The pre-made sizes allowed for a couple inches of breathing room around the window too, which we liked anyways. We just spaced the height of the second shelf by eye and chose 14″ above the other shelf, which gave us enough room to load up the bottom shelf without things feeling cramped, but also allows a shorty like me to easily reach items on that top shelf.

As for actually hanging them, we held up the bottom shelf in place and made sure it was level… 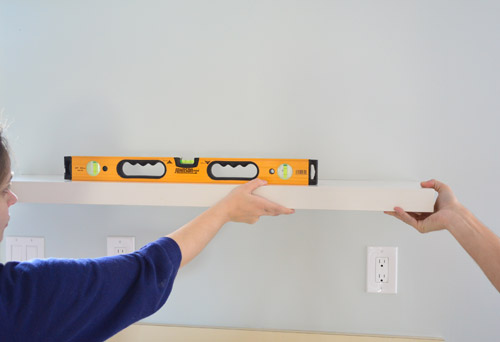 … before marking the top corners on each side and drawing a line across the top, like you see below. 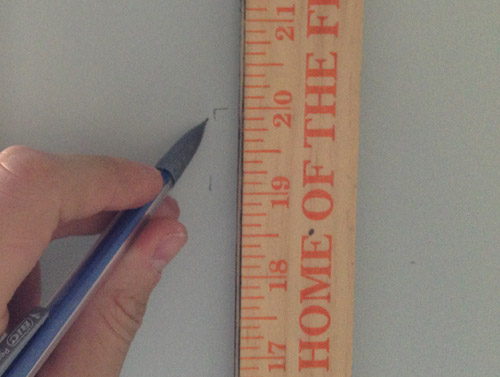 These longer shelves come with a metal hanging brace and screw, so when you open things up, this is what you’re dealing with. 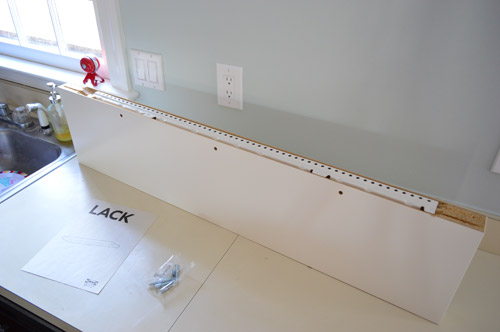 The metal brace is actually pretty smart. It has a bunch of holes all along it so you can just find a stud (we used a basic stud finder) and screw into at least two of those along the span of the shelf, so you know it’s extra secure. The instructions show a few recommended screw-to-stud placements. 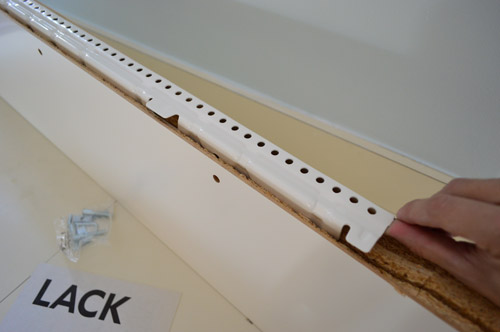 Next I placed the brace along the horizontal area where we wanted to hang the shelf. I just measured in a few inches on each side from our little pencil corner guides since the metal brace doesn’t run as long as the shelves themselves) and I used one screw into the drywall right in the middle, just to hold the brace in place. 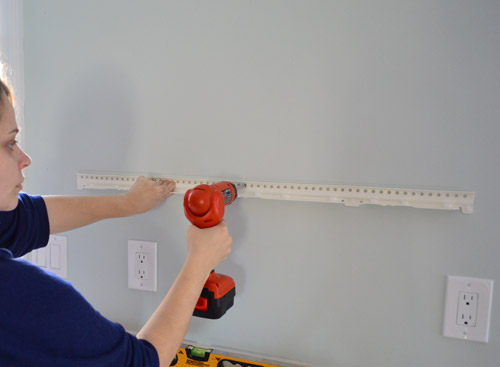 That freed up my hands so I could use the stud finder to find the actual studs, and drive two more nice long screws (provided with the shelves) into the studs on that wall, so it was held up really strongly (John aided me by holding the level to be sure it didn’t tweak up or down on a certain side as I went). 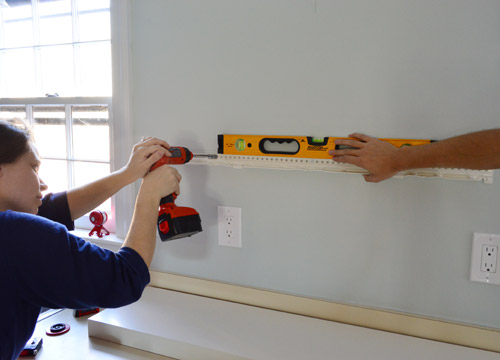 There are these little metal plates that you use when you drive the screw into the stud (they’re sort of like washers, they go under the screw and hold the brace even more firmly than a screw alone could), so those three metal rectangles that you see below are where two went into studs (we also added one more with an anchor for even more holding power). 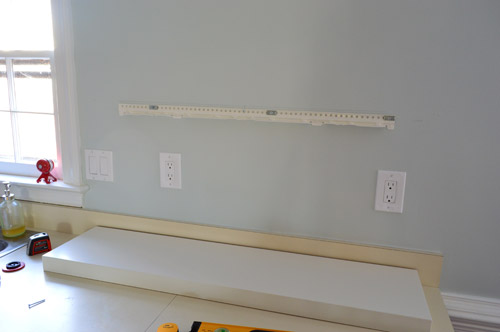 Then you just slide the shelf onto the brace and tighten the three provided screws that go into the three pre-drilled holes in the shelves. At first I did it by hand, all allen-wrench-style. That was for the birds (took a million years)… 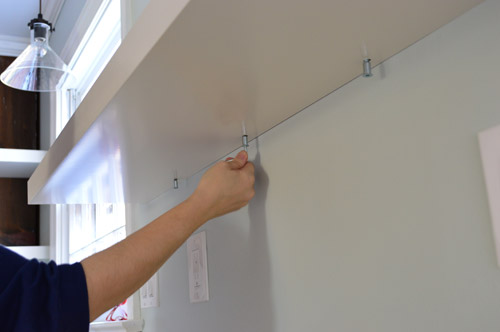 … so I broke out the power drill to drive those in a lot faster. 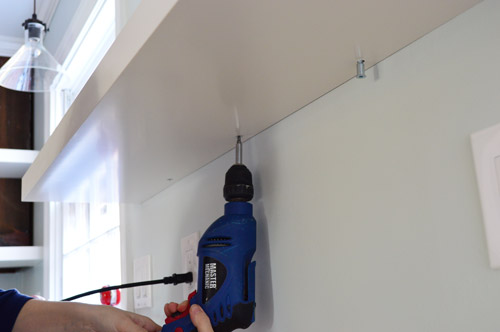 We repeated that process for the higher shelf, and when it came to the little side shelves, those were really easy. We just used heavy duty anchors driven into the pre-selected spots on the wall that aligned with where we wanted to hang each shelf. As opposed to the longer shelves, which are screwed into place pretty firmly in three places each, these can also be popped on and off easily, which is awesome because we’ll temporarily remove these guys when it’s cabinet painting time. 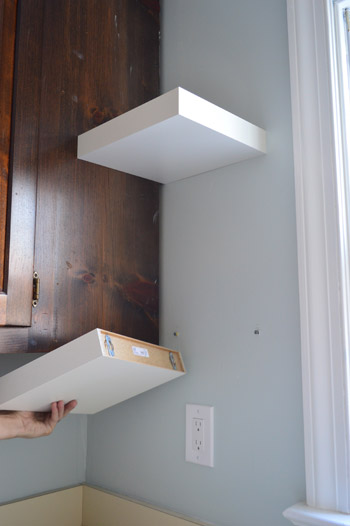 They’ve been really sturdy so far. The stronger the anchor you use, the more stable your shelves will be – and of course if they’re not placed perfectly level into the wall, they might wobble. So be sure to measure at least twice and break out that level for the best result. I think as the room evolves, the items on each shelf will too (for example, I might hang a small framed photo above that stack of plates on the wall, or place something taller on that bottom shelf for some fun color/height). 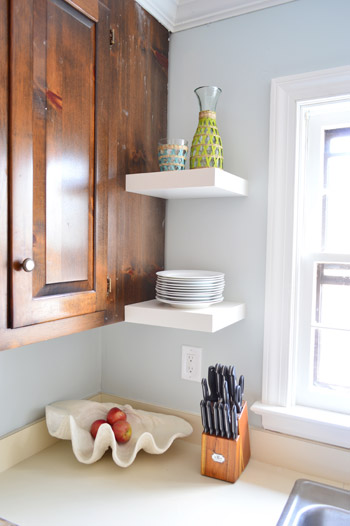 But for now they’re super functional – I just filled the bottom ones with the stuff we use all the time, and the top ones with items we just love to see. For example, things I might leave out on the counter to be decorative (like a potted plant or a pitcher-turned-vase) along with other items we use a lot that didn’t quite fit onto those bottom shelves (like more plates and mugs). 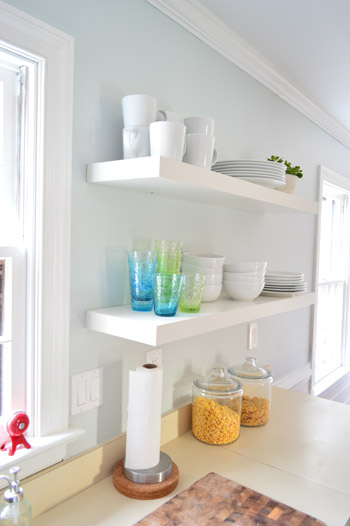 Here they are from the other angle. Oh man, it’s so much faster to unload the dishwasher again (we seriously missed that perk of open shelving from our last house) and we love that although they flank the window on each side, they don’t really block any light since they’re shiny and white (they bounce light around a lot themselves) and they’re not dark and solid like the old cabinets were.

Update: These longer shelves should each be able to hold 33 lbs according to Ikea if you go into studs (we went into two of them), and so far ours have been really strong no matter how much china we put on them. Giant upper cabinets full of dishes are held up the same way (screws into studs) so that definitely helps to ease our mind, along with the fact that we had good luck with  the same type of Lack shelves in the dining area of our first house for 4+ years. 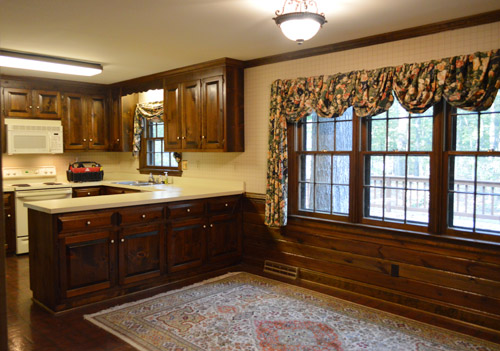 … and we’re crazy excited to lighten up those upper cabinets and go even deeper/richer with the lower cabinets. We’ve never had a tuxedo kitchen, but we’ve been such huge fans for a long time (just look at how gorgeous this one is). In fact we’re sanding and priming this week, so we hope to have a whole “new” kitchen for 2014! 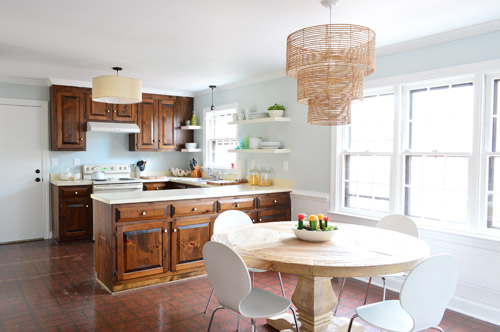 Was anyone else doing last minute home projects this weekend in anticipation of the holidays? Do you have any big projects planned this week? We seem to have a tradition of doing something big and house-interrupting right in the middle of the Christmas craziness…

Psst- We’re taking more quizzes on Young House Life. And this one was crazy accurate!