Young House Love » Outside » Let’s Take It Outside

There are a few outdoor showhouse spaces that we haven’t shown at all in this entire yearlong process. Each of the seven showhouses were encouraged to include some fun outdoor spaces as well as indoor ones, so aside from the stuff you can see from the curb, there’s also a back porch and a back patio complete with a stone fireplace. The cool thing about these outdoor spaces is that they’re the places that we got to put our heads together with the builder and the architect the most – and they ended up being some of our favorites. 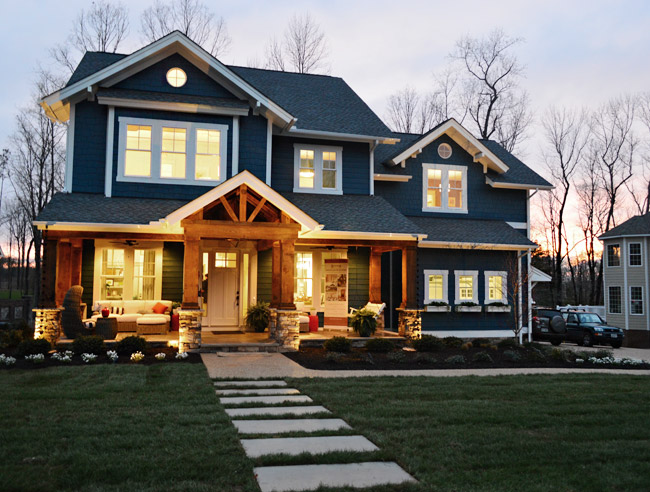 The craziest thing is that our house won 1st place (i.e. the “Gold Award”) for both Curb Appeal and Outdoor Living. With this being our first time doing a showhouse, we honestly weren’t sure we’d win anything at all, so getting those two along with the silver for Creative Home surprised and thrilled us to say the least. 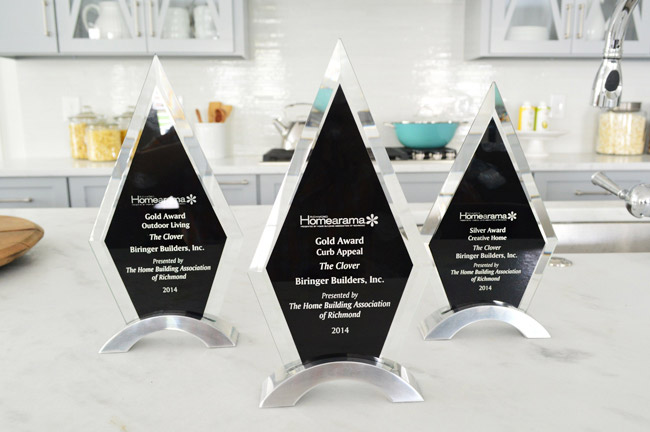 We’ve talked a lot about the front porch already, since it has been one of the defining features of our home. Namely the exposed wood (stained with Sikkens in their “Cedar” color) paired with the navy siding (which is Newburg Green by Benjamin Moore) and the crisp white trim (which is Steam by Ben Moore). But it’s looking even more polished now that the landscaper worked his magic, and we got our big limestone pathway laid. In addition to the aggregate driveway and front pathway, we wanted to create some charming access from the street, so after sharing a few inspiration photos with the landscaper and the builder, they cut big 2 x 4′ slabs from the same material as the porch’s stone column caps, and laid the sod around them. 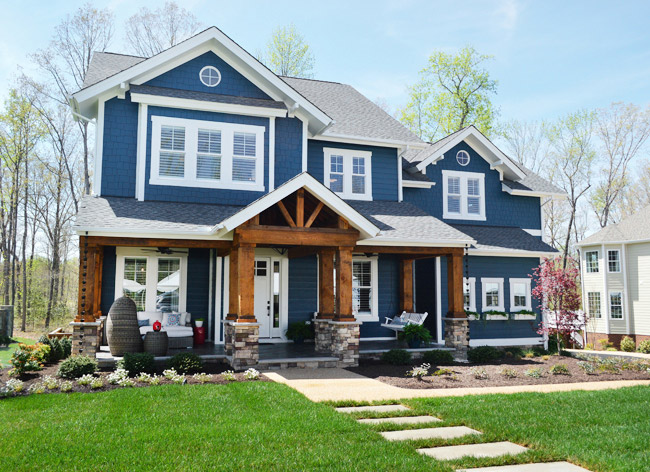 One interesting tidbit about the landscaping was that John the Builder and Chris the Landscaper had to submit their plans to the developer of this community, who actually nixed a bunch of larger plantings (we love more mature looking bushes and trees, but I guess for the show they wanted everything to have more of an open look).

The front porch is nice and spacious, with a large 14 x 11′ area to the left of the door, which is where we created the main seating area with a sofa, ottoman, chair, and a few side tables (some of those aren’t pictured in the shot below but if you look at the picture above you can get a better idea). 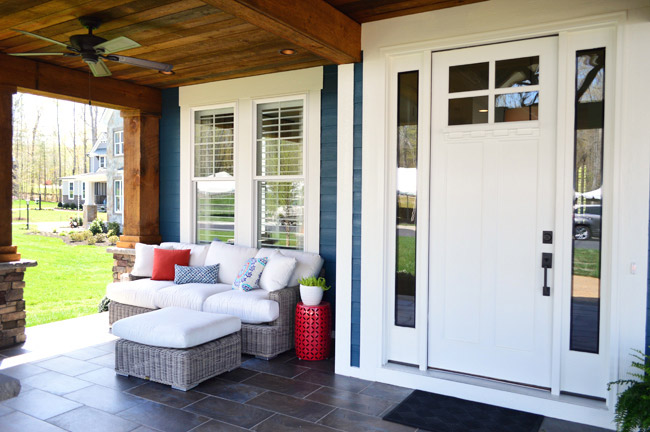 The other side is around 11 x 12′, which means there was room for a porch swing, a swivel chair, and another red side table (that’s hidden behind the chair in the photo below). 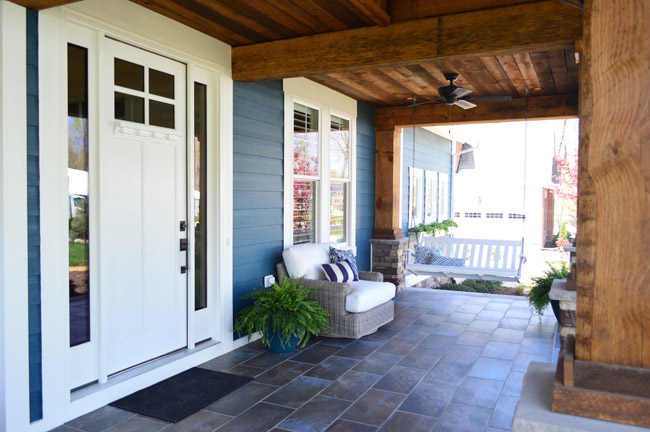 Most of the outdoor furniture is the Wyatt collection from Arhaus, including the sofa, the ottoman, and the swivel chair on the other side, which they kindly donated for the show (we’re sending them back afterwards). They’re all super comfortable, and the best part is that Arhaus agreed to give away an identical set of outdoor furniture to one of you for this week’s giveaway. 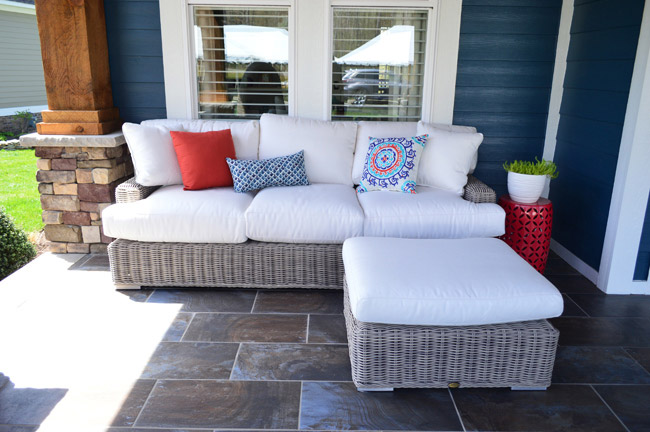 Most of the smaller accessories were stuff that we bought at Lowe’s (like the red metal garden stools and the medallion pillows) or Target (like the bolsters). They brought in some nice color, while the dark 12 x 24″ porcelain tiles that were donated by The Tile Shop grounded the porch. 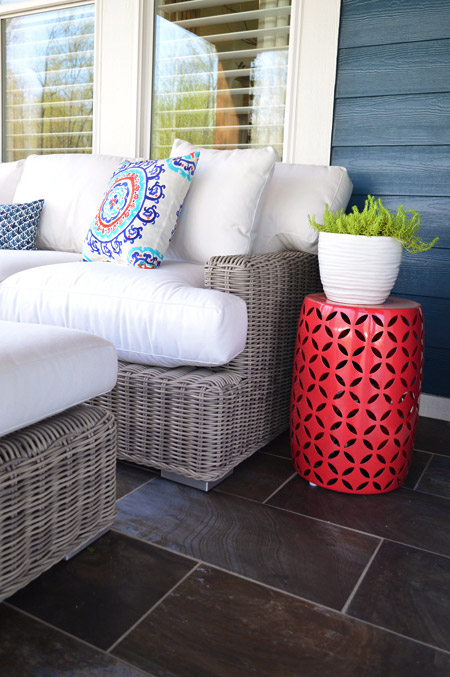 The sun prevented me from getting good pictures of the other chair on that side, so forgive this photo from an earlier day (note the lack of sod next door). It’s a swiveling egg chair and side table from Green Front Furniture. Since Sherry is genetically one-quarter egg chair, she had to have it. 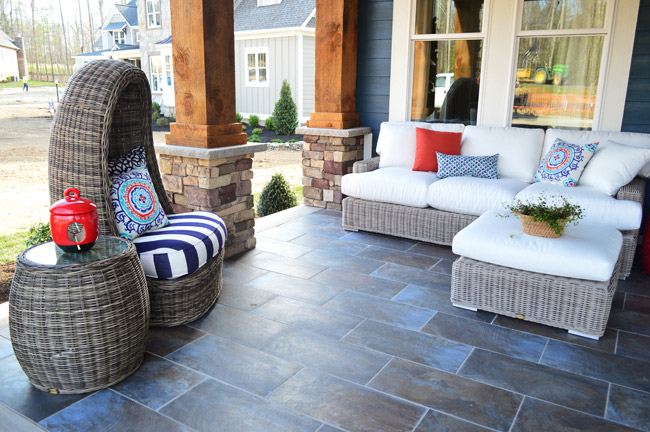 Here’s another shot from that same day, which is the best one I seem to have of the light fixture we bought from Restoration Hardware. The angles of the light are nice with the peaked wood ceiling, and the fans are from Hunter (they’re the same ones we installed in our own sunroom). 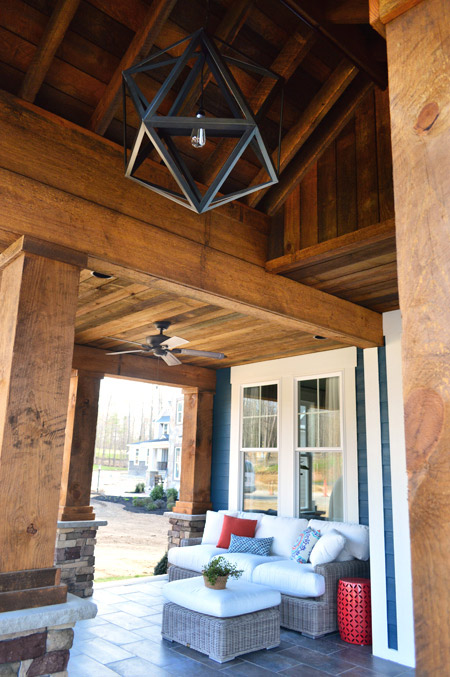 The porch swing on the other side was a purchase from Hayneedle.com, but we had to spray paint the gold chain black to make it blend better with the rest of the porch. I won’t admit to how many times we took breaks just to swing out here. Clara was that bench’s biggest fan. 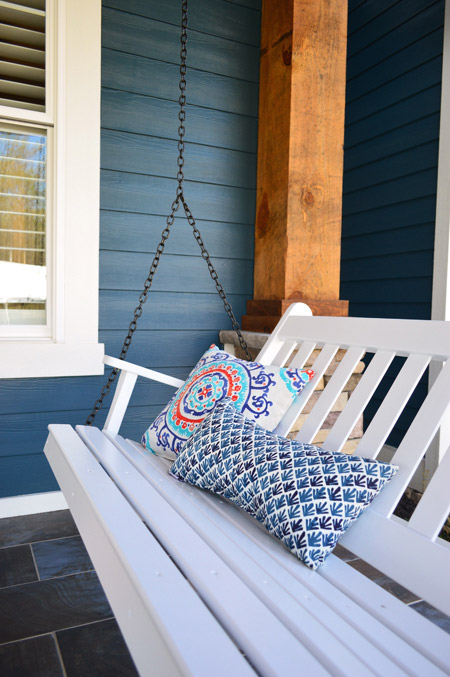 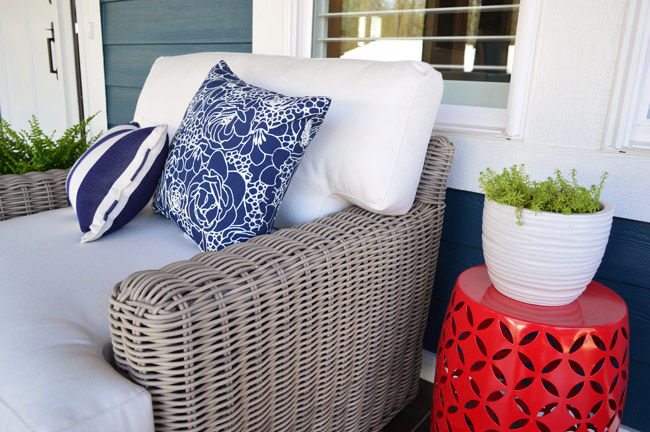 The rest of the porch was filled out with random potted ferns (we bought the pots & ferns at Lowe’s), just to add some greenery. 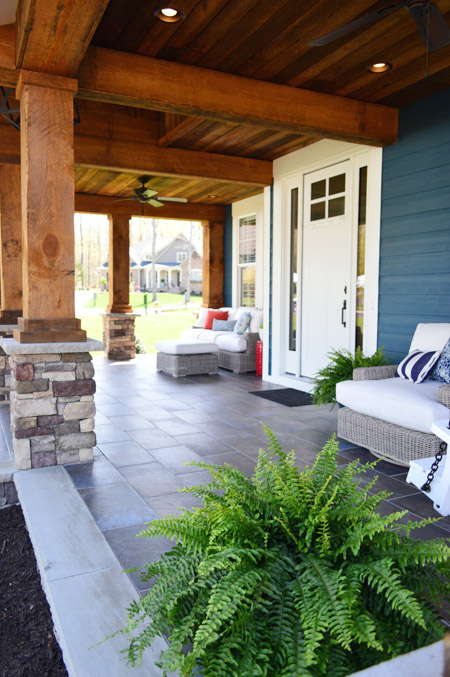 We also had the carpenter build window boxes to liven up the trio of windows on the right side of the house (that’s actually the garage, but it has side access). 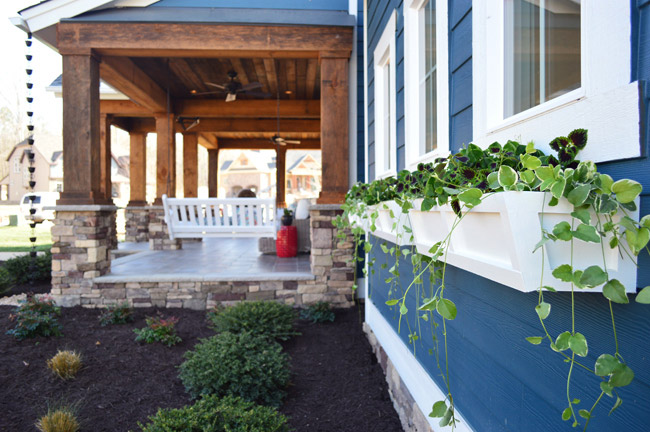 On the front porch we also went for dark bronze rain chains instead of traditional gutters, since we can probably all agree that downspouts aren’t the most charming architectural detail out there. These decorative chains help guide the water from the gutter down a drain to the ground and look pretty darn cute doing it. 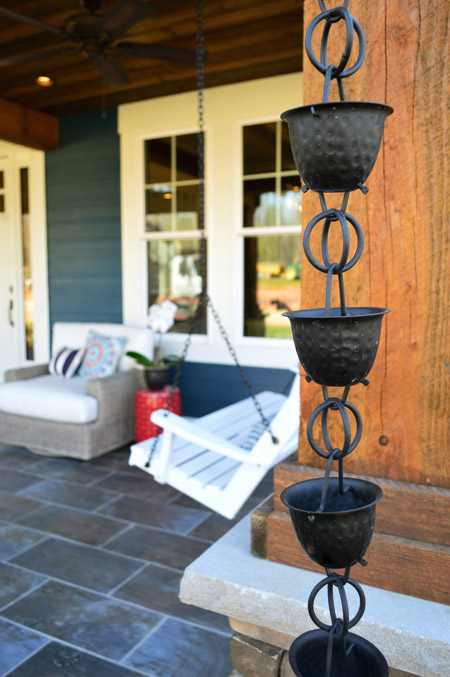 If you walk around the side of the garage, we continued those limestone slabs so they lead to the patio area behind the house. 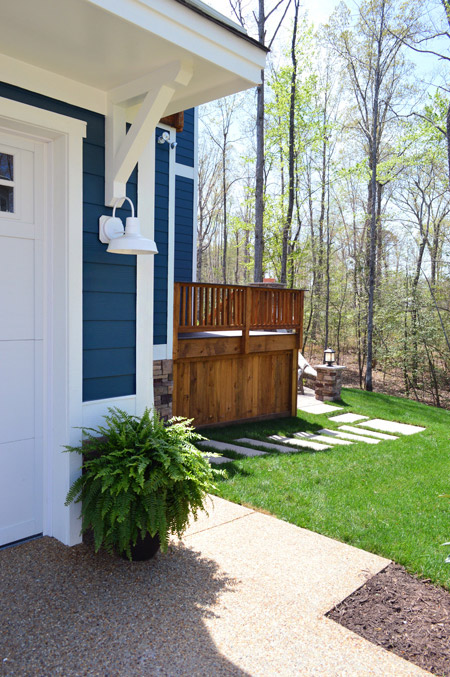 The stamped concrete patio is almost literally “hugged” by the outdoor fireplace. Most of the design credit for this area goes to the builder and his team. We gave input on the type of stone and a few details, but John and his guys built it seemingly overnight while we were tending to a few other spaces. Then we walked out back and said “yeah, we could get used to this.” 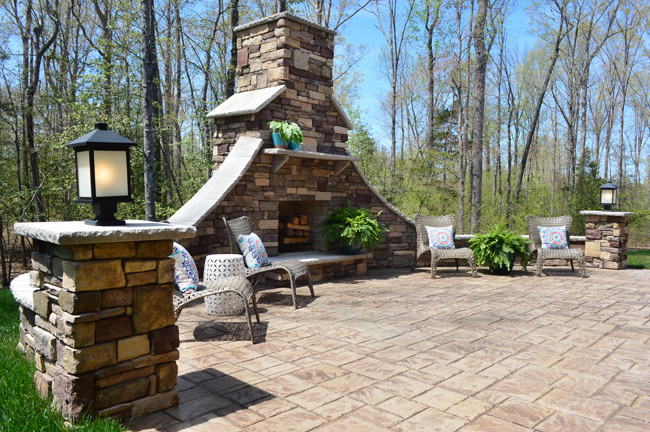 We kept the “styling” pretty light out here, since we were running out of time and wanted the focus to be on the fireplace anyway. There’s an outdoor dining area on the back porch (which we’ll get to in a minute), so we didn’t think another table made sense down here, so we landed on a casual seating arrangement. The woven outdoor lounge chairs, pillows, and planters are all things that we bought from Lowe’s. 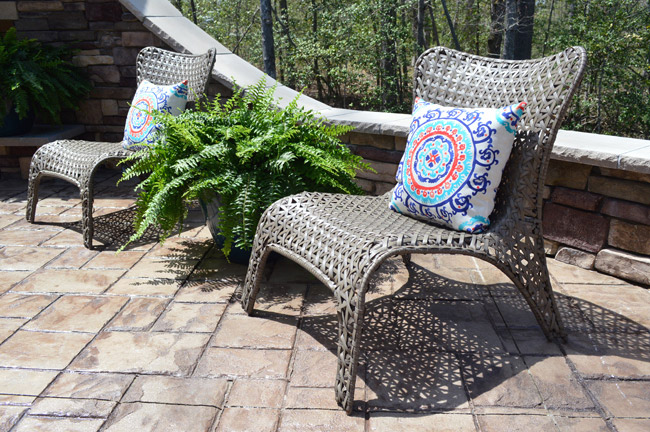 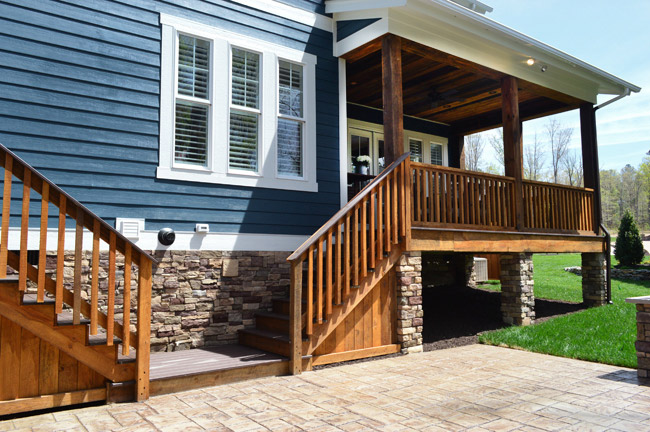 The back porch has the same exposed wood look on the ceiling as the front porch, but instead of tile this space has a Trex floor. The french doors lead into the living room/kitchen area, so this was a natural spot for an outdoor dining area. 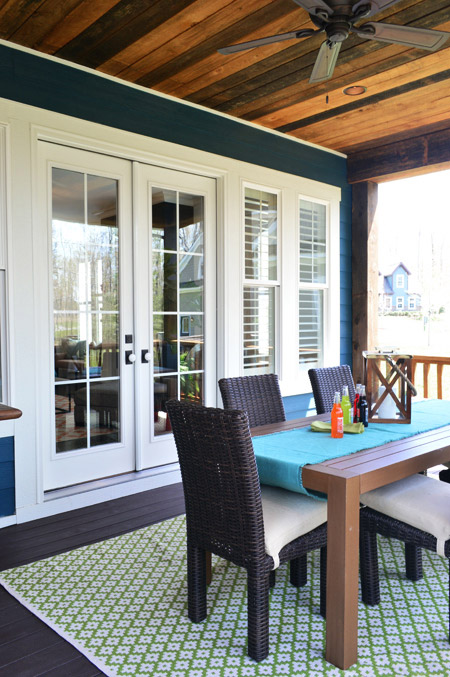 The dining table and chairs were from Green Front Furniture, the indoor/outdoor rug is from Dash & Albert, and the runner & sodas are from World Market. All of the other styling accessories are HomeGoods (like the planter, the lantern on the table, etc). 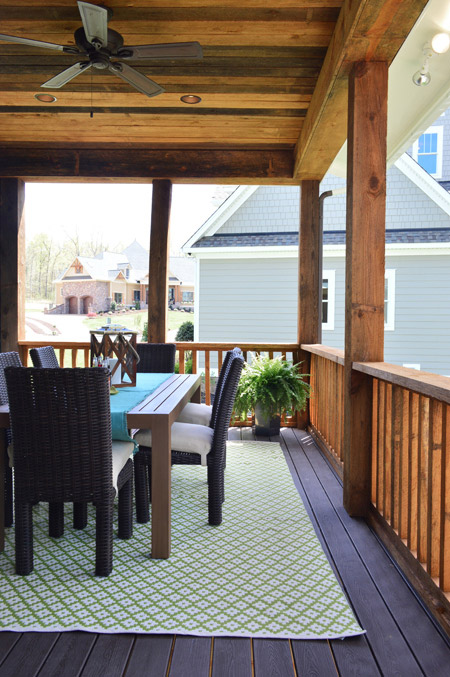 So that concludes the outdoor tour. We’ve still got a few bedrooms, bathrooms, and miscellaneous spots like the laundry room and the mudroom to share along with a video walk-through of the whole house, so we hope to have all of that sourced and shared in the next week or two.

Carving Out Mulch Beds
Fab Freebie: Showhaus To Your House