You know we love ourselves some furniture tweaking… 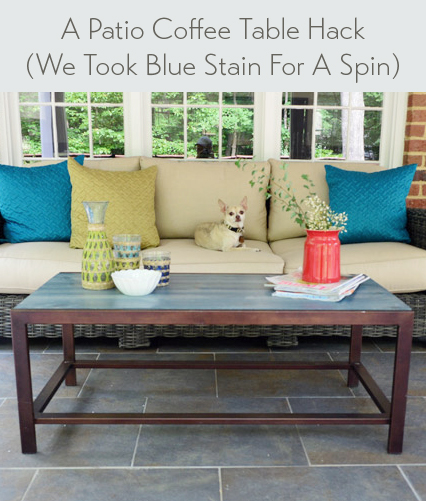 But first, guess what arrived?! I’ll give you two hints: this and the photo below. Admittedly, both are very strong hints. Maybe I need to work on being more mysterious. 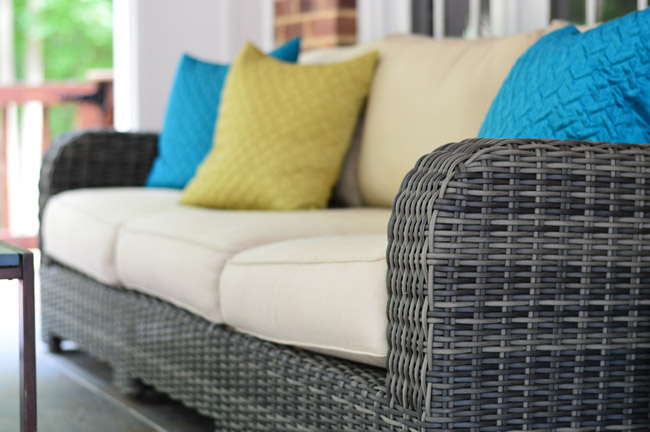 Despite Sherry’s promises to throw a ticker tape parade when our new outdoor sofa showed up, its arrival was unceremonious. Sherry was on a conference call. A big truck pulled up. I handed off the baby to Sherry and ran outside. A big box came out of said truck. Yada yada. Clara was out with Grammy, but when she arrived home she declared it “perfect!” and said “I love it!” and that was that, as you can see in the video below.

What you can also see in the video below is the last appearance of that old white coffee table, which has been a staple in all of our sunrooms to date. 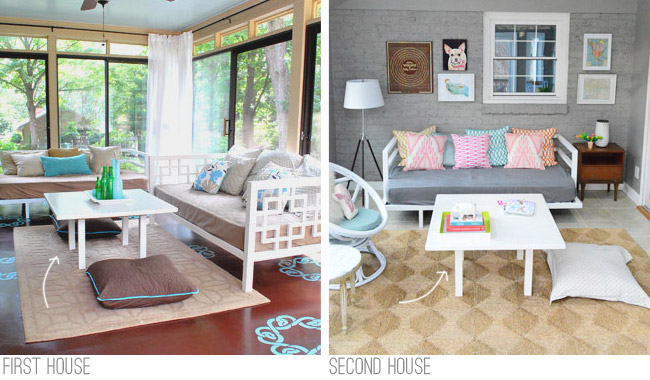 The table is actually a big thrift-store tabletop that we screwed onto an Ikea Lack table, so it was a temporary solution that has long overstayed its welcome. Keeping it outdoors for nearly a year finally put the last nail in its coffin. So if you ever wondered how Lack tables respond to moisture… 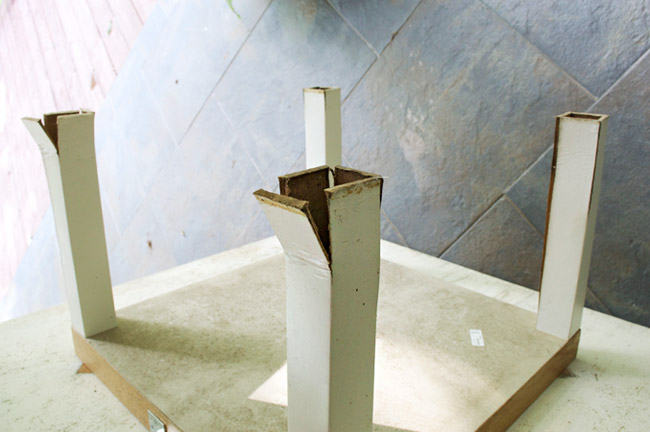 We had been planning to replace it with another table that has been with us through three houses, but were just waiting for the sofa to arrive to get started. It’s the metal + glass thrift store table that anchored our first living room and enjoyed a brief stint outside at our last house. 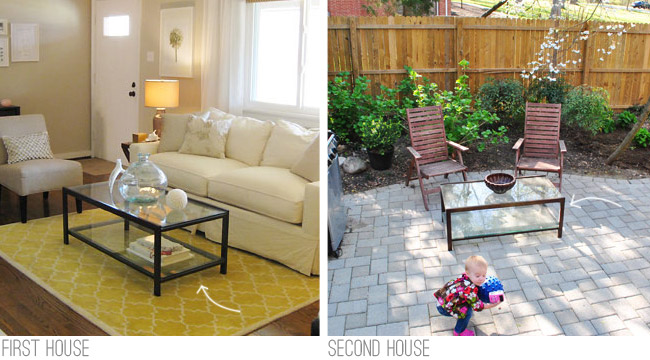 The time that it spent on our old patio taught us two things – the metal is great outside, but the glass is not. We were constantly cleaning pollen / dust / watermarks off it, so it always looked foggy and dirty. So we decided to make a wood top that might be a bit more durable (and will hopefully hide a lot more dust/dew/etc). We kept the glass in case it ever comes back inside, but for now the metal frame is the only part coming out of storage. 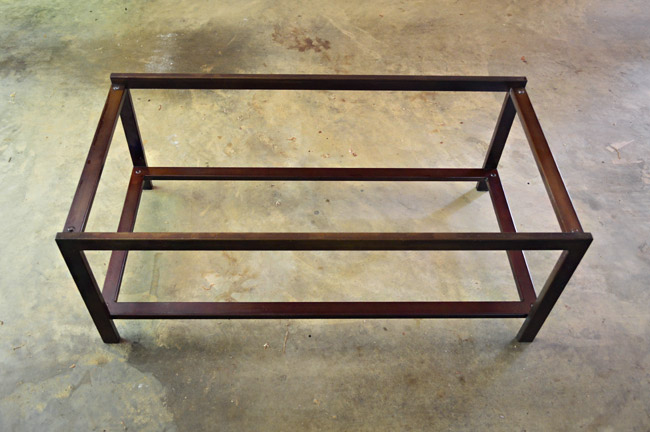 At Lowe’s we found this $19 pre-cut panel that was the exact width (20″) and depth (3/4″) we needed, so we happily accepted the shortcut from having to cut a board to size (although this one did need a little trim on one end). 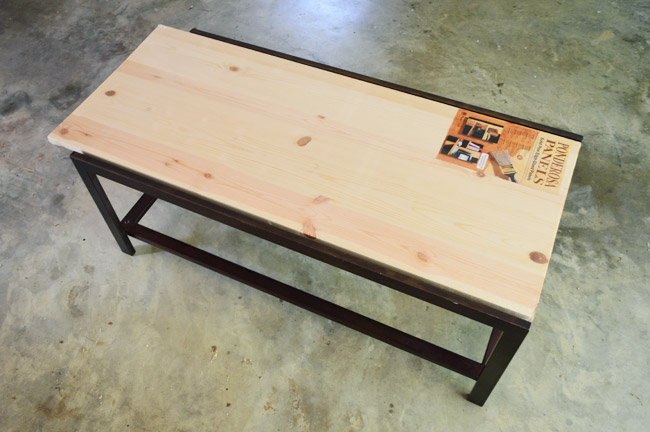 Our main concern was keeping the board from warping – either in moisture or under the weight of items on the table. If we used something thicker, the top wouldn’t sit flush with the metal frame – so I did my best to reinforce this panel with some x-bracing underneath. 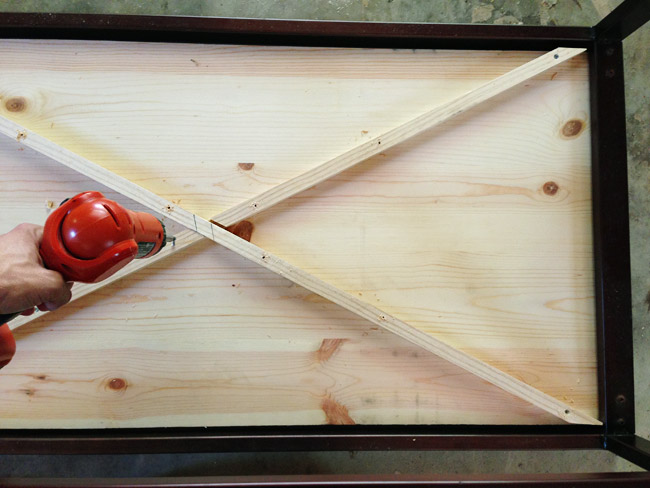 I ripped a 1 x 3″board in half on my table saw (any thicker and it would have poked out below the metal frame) and cut it to length so that it would sit in the X-shape that you see above. To make them nest together in the center, I marked where they crossed and used my table saw – set very low – to notch out a groove on each board. They weren’t perfect, but it worked! 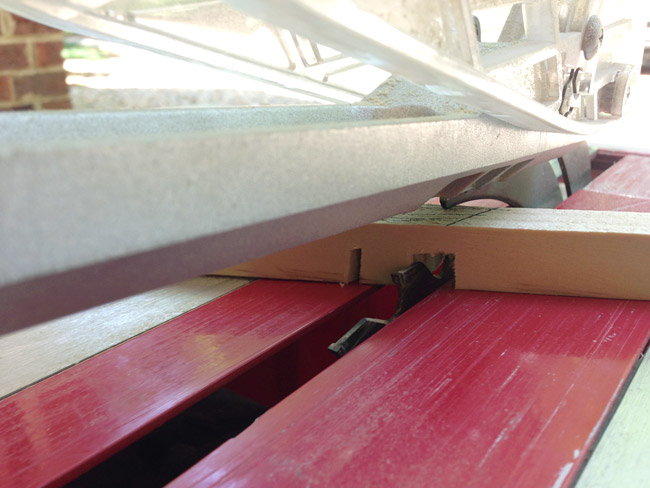 We loved the look of the raw wood against the metal, but in the room it just looked unfinished in combination with the new sofa. Since we knew we’d need to stain and seal it for protection against the elements, we decided to be a bit adventurous. 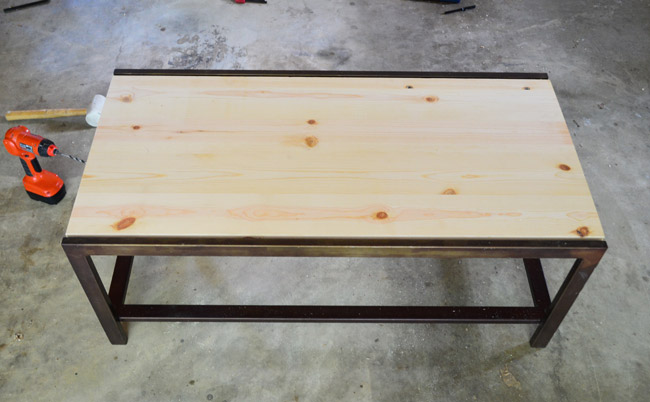 So yeah, we got blue. Specifically River’s Run Semi-Transparent Stain in Olympic Maximum, which is not only used for outdoor furniture, it can also be used on decks and fences. 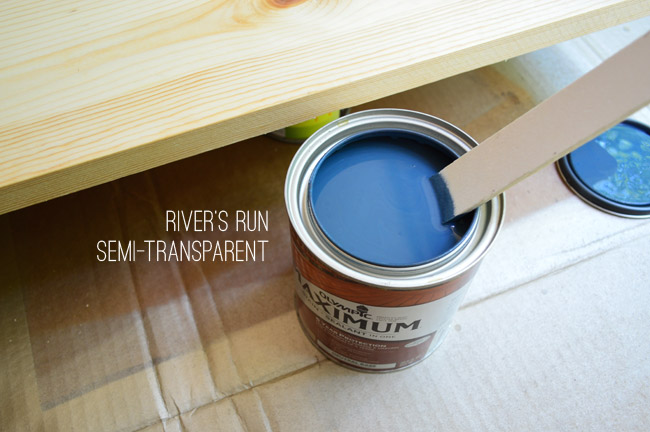 Since going with a colored stain was new to us, we did some tests on the spare piece of tabletop that I had trimmed off. After applying some Minwax Prestain Wood Conditioner to the whole piece, we tested out what one coat of River’s Run would look like vs. two coats. And then for kicks, we brushed a quick coat of Dark Walnut stain on the end of each swatch to see if we liked the slightly warmer, more aged look of those two stains in combination. 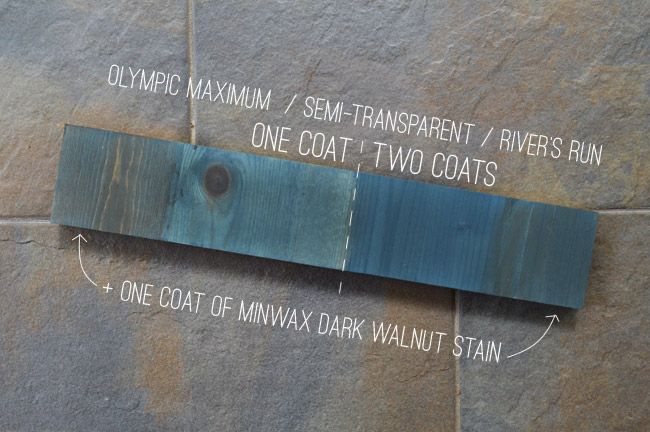 We decided to go with the simplest option: just the one coat of River’s Run. Two coats felt a bit too intense (almost like it was painted, not stained) and the Dark Walnut overcoat was too brown against the metal table to the point that it sort of looked muddy/dirty when we held it up next to it.

With that decision made, we just followed the staining instructions after applying the same Minwax Prestain Wood Conditioner to the wood (remember when we learned how much of a difference that made back here). You basically just brush it on, and it looks crazy-blue and scares you (see below) but once you let it soak in and dry, it ends up being a nice subdued tone… 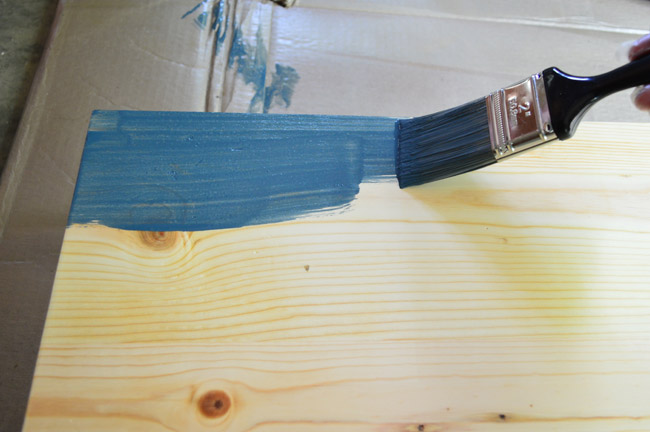 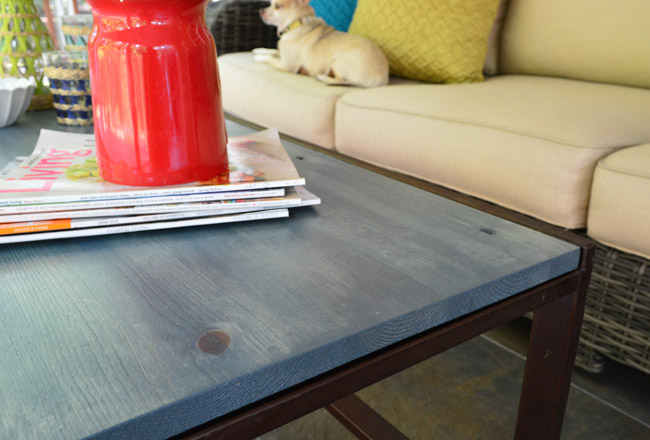 Oh but after our single coat of stain was applied and had dried (on both sides) we did elect to brush on three coats of Safecoat Acrylacq as a sealer (to the top and bottom of the board). We really want this thing to hold up well outside, and when it rains really hard the table in here does get coated with a fine mist of water, so it felt like nice added insurance. 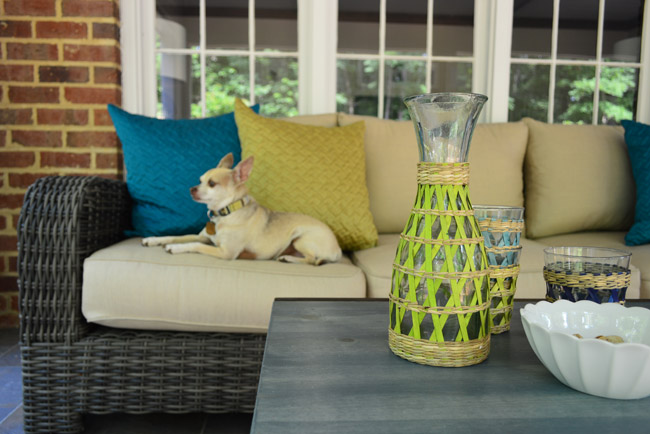 Going back to the sofa for a minute, we’re really happy with it so far. We love the slight color variation/striping in the wicker and the whole things feels very sturdy while still being comfortable. The cushions are nice and dense, so they don’t feel flat or too floppy (which hopefully bodes well for their durability). If anything, they feel like they need to be broken in a little, but we’re already hard at work on that task. Burger takes his job very seriously. 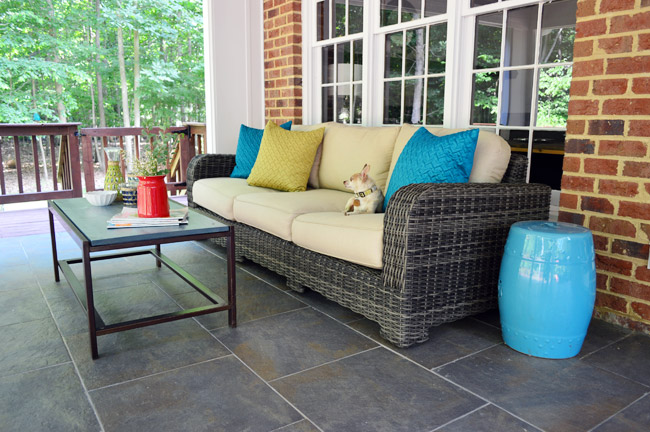 I was a little wary of how the blue tabletop would work out, but I’m pleasantly surprised at how well it works with everything out there. It brings out some of the blue undertones in the tile while still looking rustic enough to contrast with the metal base. And maybe it’s just the sky reflecting off of it, but even the woven part of the sofa seems to have a hint of blue going on. 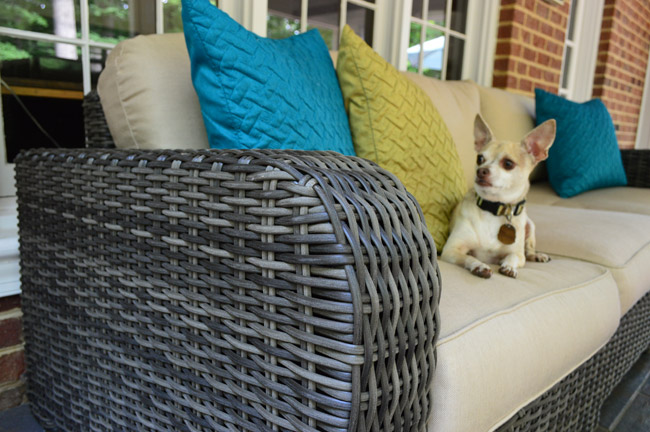 It’s pretty exciting to finally have some real furniture out here. We pretty much live out back in the warmer weather, so having a nice shaded place to lounge is well overdue. 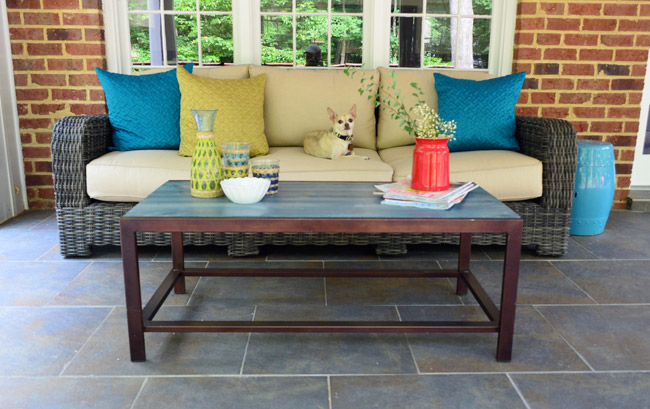 The rest of the sunroom is still looking pretty empty (which is why I opted to photograph these so tightly) but we’ve already set a plan in motion for filling things in and adding more function/seating. After all, if we ever plan to reclaim the sofa for ourselves we’ll need to give Burger another alternative.