Continuing the recent trend in our house – Clara is the latest family member to get a ceiling fixture in her room. And methinks Sia might break out in song about it (“from the chan-de-li-eeeer!”). 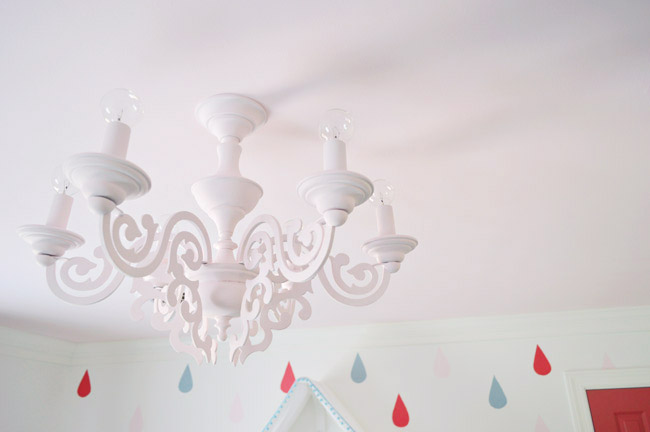 If it looks familiar, it’s because you’ve seen it before in our dining room. Well, a previous incarnation of it at least. We’ve always been intrigued by this chandelier, which was here when we moved in.  The finish wasn’t totally our style, but the swirls and flat arms (it almost looks like an intricate paper chandelier) always made us think it could be a good candidate for Clara’s room. 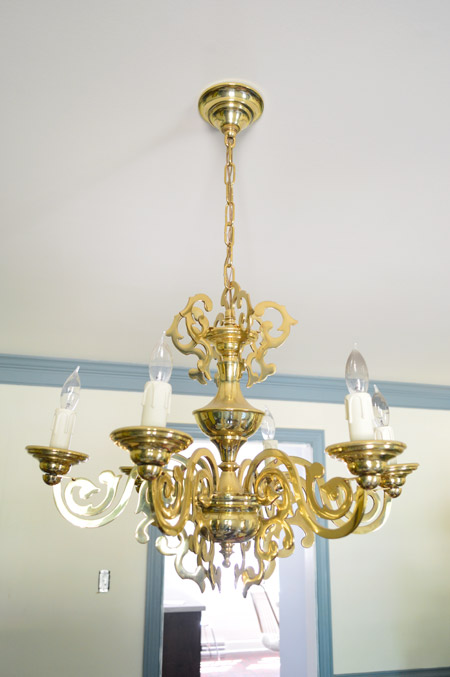 The main problem was that it was too big. Even without any chain, it would’ve hung about 26″ down from her eight foot ceiling, putting it perilously close to her six foot father’s eyeballs. But since Home Depot has yet to carry shrink rays, I decided to take it down and see if I could shorten it myself. 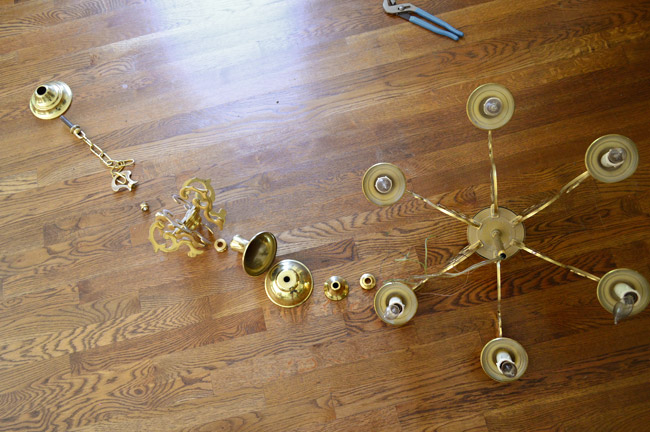 Just by loosening one screw at the top I was able to disassemble all of the nesting parts that create the ornate shape of the chandelier (I laid them out in the line above so I could remember their order). What it left was this long center post so I could begin spooling things back onto it. 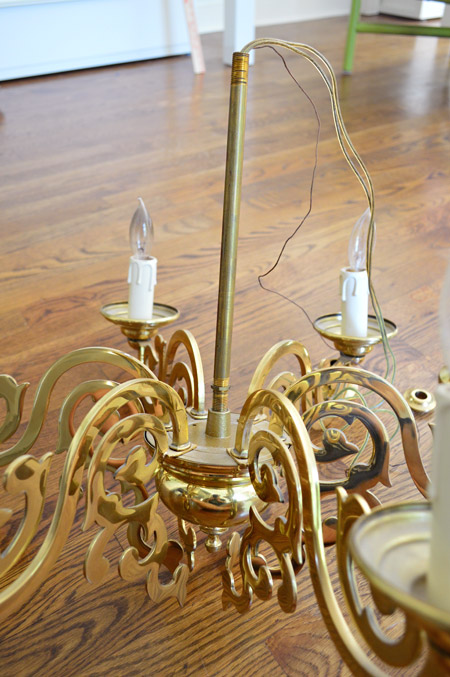 My goal was to reassemble most, but not all, of the pieces into something that still looked like a chandelier, but was several inches shorter than the original shape. That center post, however, was problematic since without buying a shorter one, I wasn’t going to be able shave much of the height off. I contemplated hacksawing it shorter, but then I realized I needed the threaded area right at the top of the rod to screw it back together in the end (hack-sawing it shorter would have removed that threaded area). 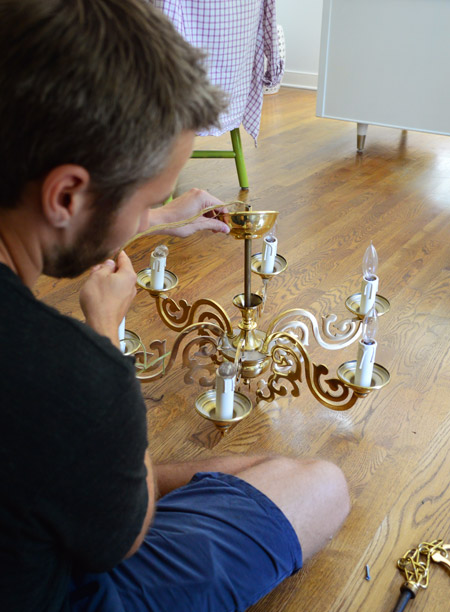 That’s when it struck me. Rather than use that threading (#1 in the pic below) to reattach it to the loop on top (#2) so that it could attach to the canopy piece that screwed into the crossbar (#3) to that loop, I could just screw that threading (again #1) directly into the crossbar itself (thereby shaving off the height of the large loop). That saved me quite a few inches because I could cut out most of the original hanging mechanism, but I knew that it would still be nice and secure. You never want to hang something this heavy by the wires, so threading the metal bar into the crossbar in the ceiling would safely and securely bear the weight. 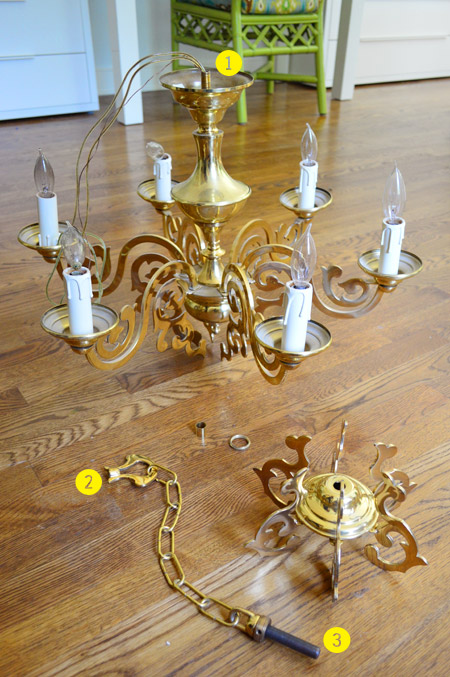 You can see which pieces I left out in the picture above, but for easier reference, here’s the original photo of it in the dining room below with the removed pieces grayed out: 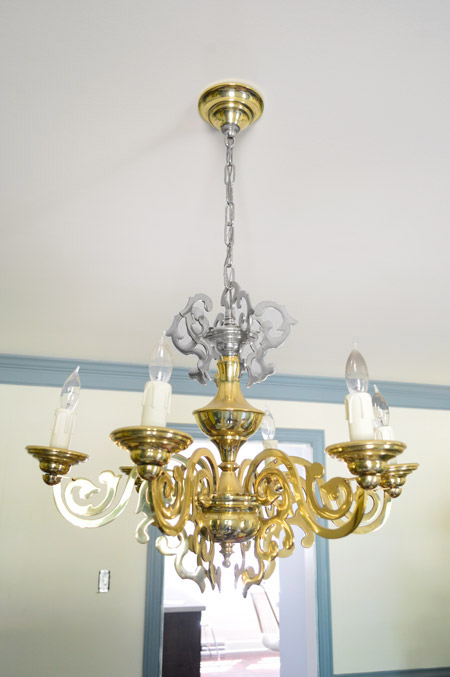 Oh, and we were going to buy new candle sleeves (the faux dripping wax wasn’t really doing it for us) but Sherry realized we could just flip them over and the drips wouldn’t be visible from below anymore (see the one in the background that has already been flipped). 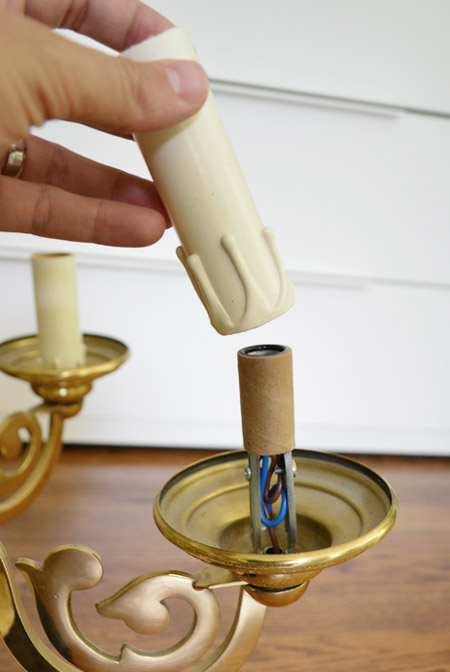 Next up came painting. I set up this little station in our garage using a plastic dropcloth, plus a bungee cord (and the original chain) for it to hang by. 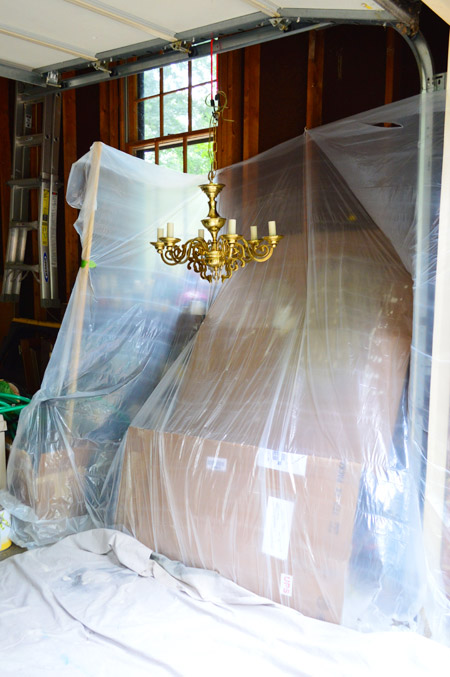 First Sherry taped off the top of each bulb connected in each candle sleeve (don’t want to gum those up with paint) and then she applied a coat of Clean Metal Primer, which is our usual go-to base coat when painting metal. 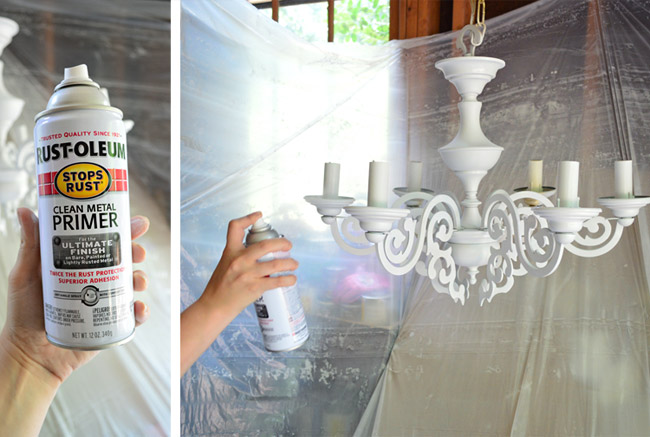 Although we both thought it looked pretty great in white after that round of primer, we were most into the idea of making it the exact same light pink color that’s on the ceiling (Pink Cadillac). Something about a pink ceiling that sort of melts into a chandelier in the same color felt very Alice-In-Wonderland to us, and of course when we asked Clara what color she wanted her light to be, she screamed “PINK!” without hesitation.

But to get it exactly the same color, we couldn’t buy spray paint off the shelf – and we knew our paint sprayer would leave something this intricate pretty drippy and gummed up (we’ve had luck using it on flat things like trim and doors, but even the curves in molding and the recessed areas in doors aren’t always covered that well) so we decided to give something we had seen at Home Depot a try. It’s a “Preval Sprayer” that we bought for less than $5, which promised to turn any paint (plus water to thin it) into spray paint. 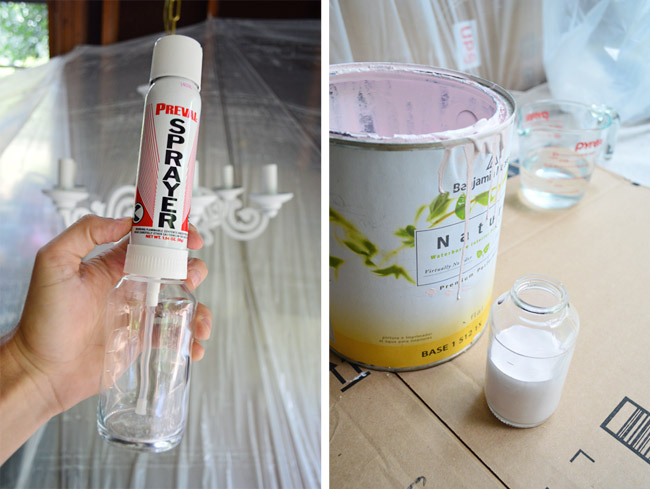 Well, we had a difficult time with it. There isn’t much direction given about how thin the paint needs to be. It took LOTS of trial and error (and mess) to get it thin enough to finally spray at all and once it did, well, it was super runny and we ended up needing to add more paint to thicken it back up again. I wish I could tell you the final formula that worked, but we lost track along the way. I think it was somewhere in the neighborhood of 1 part water to 2 parts paint. 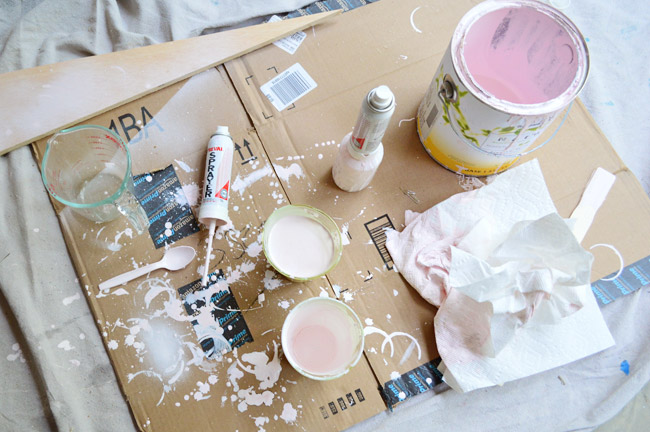 Spraying was still spotty and it would cut out or spurt sometimes, which required unclogging it somewhat frequently (putting your finger over the hole and pressing the spray button). So I’m pretty sure we never landed on the perfect paint consistency, but eventually Sherry got the job done. Once we got it spraying it was a lot lighter and more mist-like (like true spray paint) than our large Graco paint sprayer that we use for cabinets and doors, which seems to apply a lot more paint than a spray can, so it can get really drippy if you go over the same area twice or from a different angle. 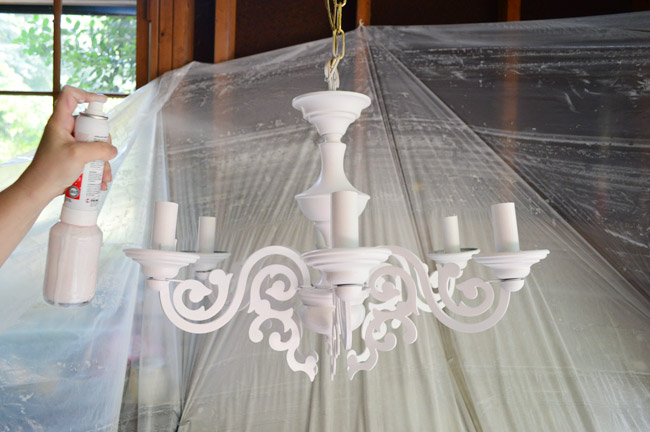 The next morning we hung it up, but I didn’t get any photos of that process because it took both of us to get it in place (Sherry supported it while I did the wiring) and it wasn’t until we were both on the ladder that I realized the battery in my camera remote was dead. 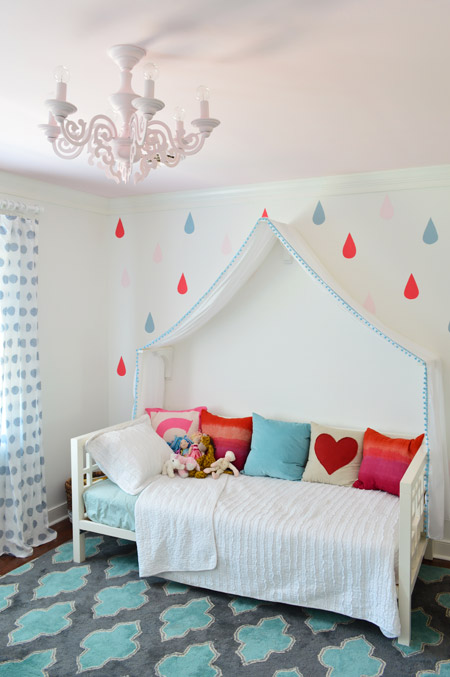 But the gist is that I attached the crossbar to the ceiling fixture (which had a center hole with threading in it, like this one) and we were able to spin the whole fixture so that the long center post (#1 from that picture way above, if you recall) screwed directly into it. We had intentionally left just about a half-inch of it sticking out above the canopy so that it could catch that ceiling crossbar, screw until it was nice and secure, and hold the canopy snug to the ceiling. 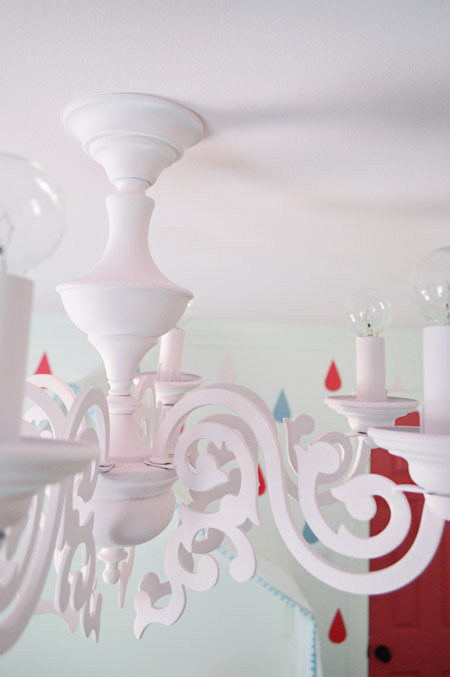 It’s hard to tell how much drop we have from the ceiling, but those bulbs are a good five inches from it, so they’re not right on it. It’s important to give bulbs breathing room on all sides (these have more than most chandeliers with shades on them). 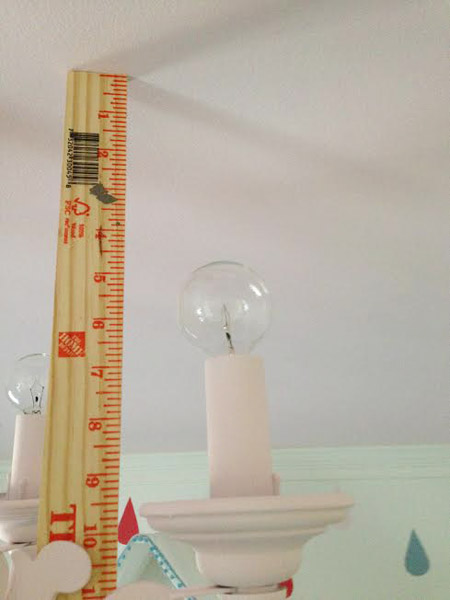 We worried that the watered down paint would look lighter than the ceiling color, but if it is we haven’t noticed. In fact, it came out so nicely that we’re almost ready to forget the struggles we had with the sprayer which (beside the new round 25 watt light bulbs) was our only cost for the project (we spent $5 for the original sprayer and $4 for one extra air can). 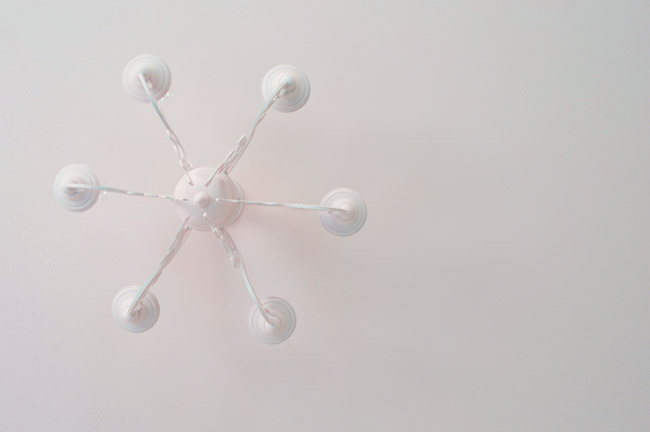 It’s nice to have a nice bright light to illuminate her room with the flip of a switch. And of course it’s always fun to take an old light that didn’t work for us in the dining room and reimagine it for Clara’s space. Here are those six 25 watt bulbs in action along with her fairy lights. 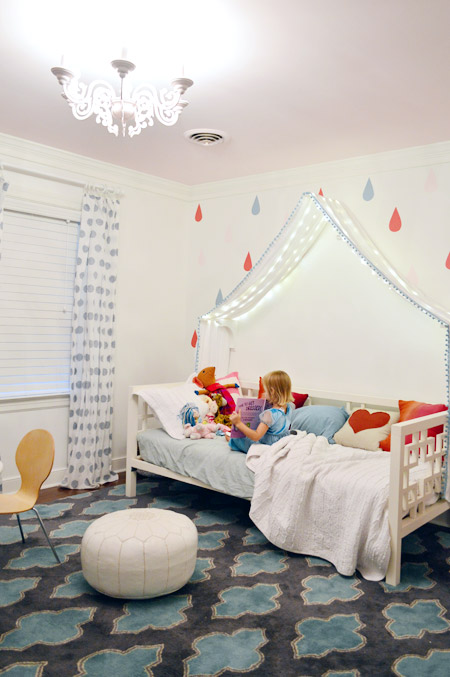 And a more ambient night shot thanks to the ol’ iPhone: 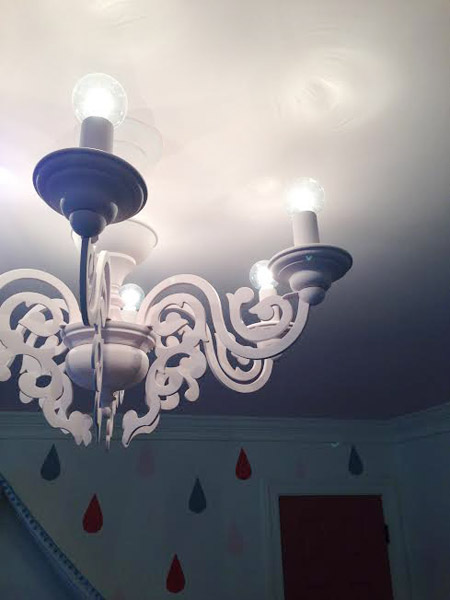 Since Teddy is too small to comment on his new light, it’s nice to know that Clara loves hers. Our favorite quote so far has been: “It’s all swirly like it’s from Belle’s castle!” 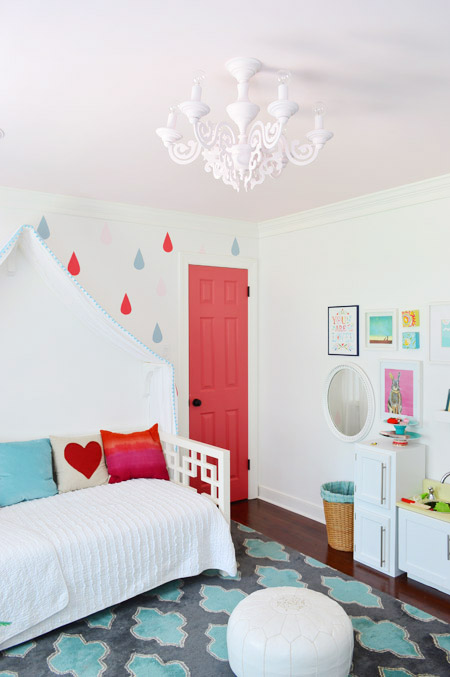 Of course this does leave us light-less in the dining room at the moment, but that’s kind of the least of our concerns in that room (I’m talking to you, blue trim). If anything we’re probably most focused on finding a light for the guest room, which is the only one upstairs that’s still ceiling fixture-less. And we’re expecting a guest next week…

Anniversary Art
We Have A Laundry Room Plan!