Thanks for all of the laundry room ideas last week, guys. We spent a lot of time mulling over every last suggestion, and even got some quotes for a few things (like moving the hookups, the doorway, and possibly bumping out a wall). One common alternate suggestion (we’ll call it “Option 3”) was to take our original Option 1 and rotate the laundry appliances 90° so that it’s out of sight. Then we could put access to the storage room on the back wall so there wouldn’t be any more of that walk-through-one-room-to-get-to-another-one issue. 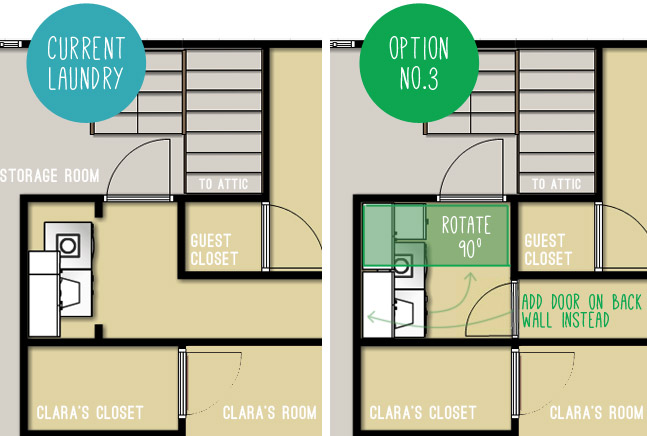 It was an interesting idea for sure. We hadn’t considered it before because, well, it would require moving all of the laundry hook-ups (electrical, water, and venting) and we weren’t originally thinking of that intense of a reconfiguration (especially when it didn’t really gain us any extra space) – but solving the door issue and tucking them out of view was a nice idea.

Another popular suggestion was Option 3 on steroids, aka Option 4. It took the idea of rotating the laundry a step further by stealing space from the unfinished storage room to create an actual enclosed laundry room. But yeah, that required an even more involved reconfiguration than Option 3. Hello framing and new drywall! 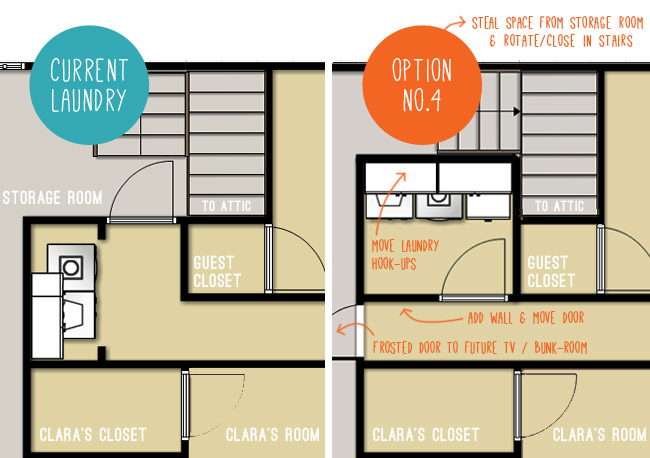 As cool as a legit laundry room sounded, it almost felt like more than we needed. Maybe it’s the former New Yorkers in us that still feel extremely fancy for having laundry in the house at all. Even when Clara was a baby (when laundry seemed to multiply and there were cloth diapers in the mix) we were well practiced in doing laundry in small spaces. Spaces where dirty laundry couldn’t ever accumulate on the floor because it was also our entryway (which we thought was a good thing – it kept us on top of it). We’ve actually never had a dedicated laundry room that was big enough for us to fold or iron in it (even growing up), so it felt just fine to carry the basket into our bedroom and sort/fold in there since it’s what we have always known. Which might explain why going through the trouble and expense of carving out a dedicated laundry room still felt like it was solving a problem that wasn’t really a big deal to us. 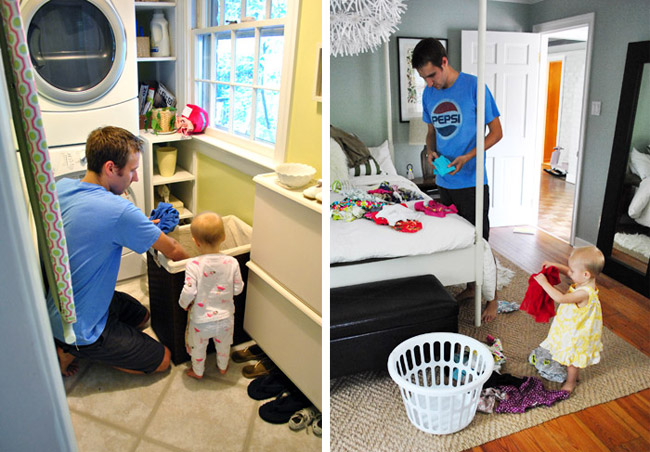 And then Lesley went and rocked our world. On Facebook she left a comment pointing out that if we moved the storage door where the appliances currently are we’d see a window that’s in the future bunk-room from the hall… 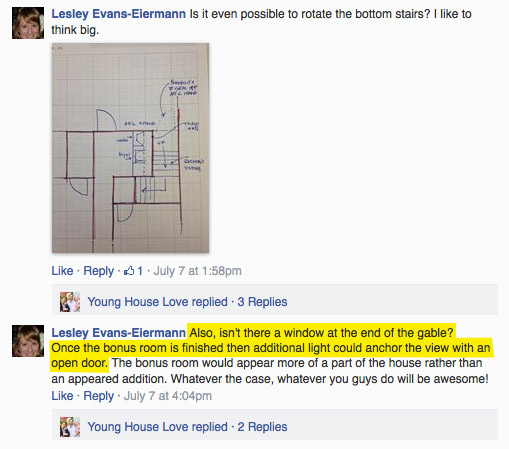 …which suddenly made that hugely appealing to us since that side of the hall is extra dark. See how the natural light goes away halfway down the hall since the last places that allow it to filter into the hallway are Clara’s room and the guest room below? 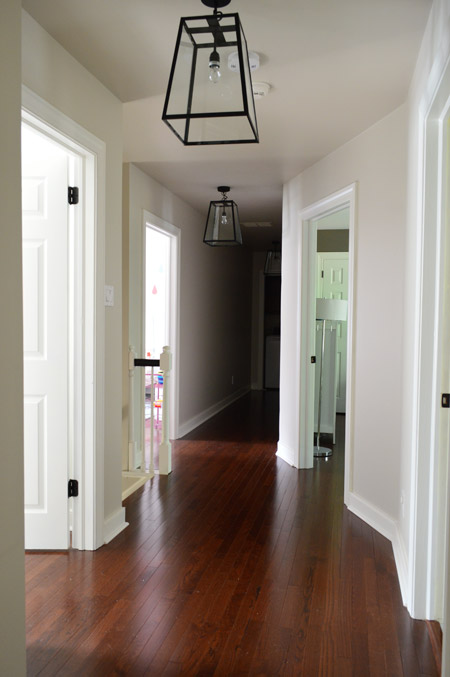 On the other end of the hall is our bedroom and there’s a window that lines up with the doorway and it’s so much lighter. Plus if we went with a frosted door like we had previously mentioned, even with it closed, light from the windows in the storage room would spill into the hall right through it. Picture us staring at each other and saying “light. bulb.” in our best Gru voice. 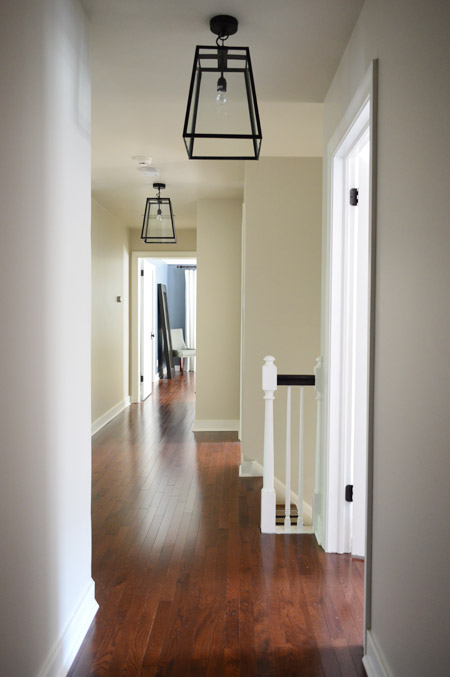 I realize that may seem like a silly tipping point for a plan that also earns us a larger, dedicated laundry space (which would probably be the selling point for most people), but the idea of seeing the glow of sunlight down that formerly dark hallway (or an actual window view with the door open) is exactly what got us on the Option 4 train. And hey, if we gain a bigger laundry room, and don’t have to pass through one room to get to another room, well there are certainly other selling points going on.

So as you may have noticed in Lesley’s Facebook floor plan, this change would involve removing the existing cased opening and putting a frosted glass door on the wall that’s currently behind the washer. We debated keeping the laundry area open or putting it behind a wall/door and thought we might like a door better for the long run (if nothing else just to dampen sound and keep a certain toddling boy out of there). So instead of turning that corner on the right wall and taking a few steps to get to the current storage room door, that door would move forward (along with a wall to close it in) and become the door to our new laundry room. 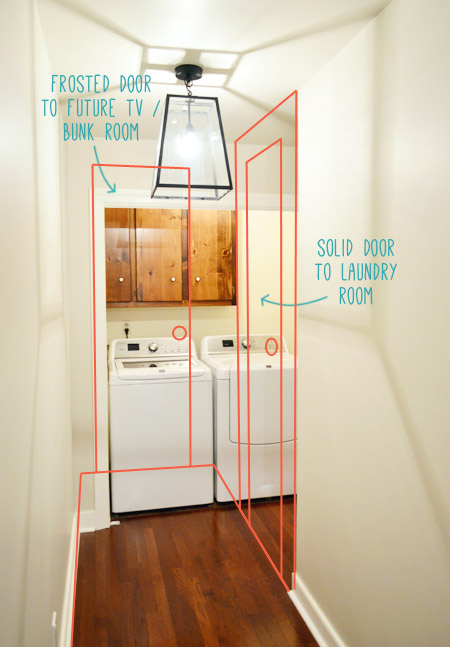 Looking from inside the storage room itself, here’s a rough rendering to show where the new walls would be added and where the washer and dryer would now sit. Please forgive all of the various messes – including the original laundry bi-folds that still live in there. Remember the door that you see below would shift back to line up with the vertical wall line on the right (back by that silver dryer vent), so it wouldn’t be as close to the washer & dryer: 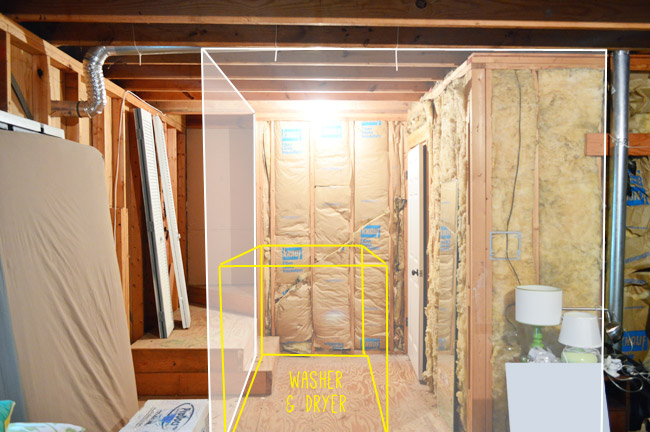 If you partook in the discussion on the post from last week, one thing you might notice that we grappled with in the comments was what would happen with the stairs that lead to the attic in Option 4. The floor plans we shared didn’t perfectly reflect the actual staircase (Floorplanner’s stock stair icon had four steps instead of one step, a large landing, and another half-step around the turn like our actual staircase). The good news is that reconfiguring the steps only really requires us to move that bottom one. But it wasn’t really the stair-moving that gave us pause as much as the idea of closing in our attic access with a wall that hugs those bottom steps (we worried it could make dragging the tree up and down more difficult/cramped). 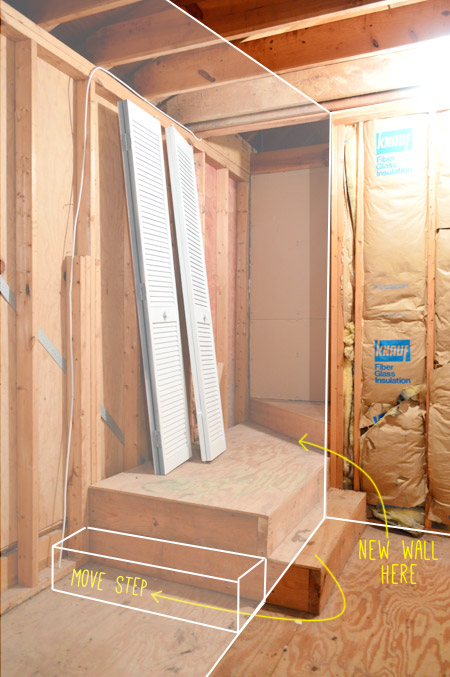 It definitely would still be possible to bring things up and down from the attic, and having a walk-up attic instead of a drop down ladder (which we had in our other two homes) is already a huge upgrade for us. So after thinking it over for a while, it feels like a fair trade to be a little more closed in when we access the attic vs. soaking up a lot more light in our hallway everyday.

Although Option 4 was sounding more and more promising, we still had to grapple with the logistics and the cost. Moving all of those laundry hook-ups is out of the scope of our skills, so we had two contractors out to estimate moving those, adding a drain under the washer, framing out two walls and two doors, and doing drywall. The first estimate came back at $4,700, even with us doing all of the demo, laying/re-laying all of the new/displaced flooring, hanging the new lights, hanging trim/baseboards, and doing all of the priming/painting after they drywall. In person he said it should be under 2K and then apologized when he emailed us the bid because it grew to $4,700 after he itemized everything – so when that number came in yesterday it definitely threw us.

As nice as a larger laundry room and more light in the hallway would be, 5K could cover a bathroom gut-job or nice new kitchen appliances, so it’s definitely more than we were hoping to spend. So instead of getting to end this post with “we’re doing it!” jazz hands, we’re crossing all of our appendages that the second estimate is easier to swallow (he came highly recommended from a friend). After all of this planning, nobody is itching to get this thing going more than we are – so here’s hoping there’s some nice therapeutic demo in our near future.