Ever been trapped in the bathroom? We were. All the time. Every spring and summer, thanks to a bit of increased humidity, our full bathroom’s door used to swell just enough in the top left corner to keep the door from opening on the first pull. Or the second. Or the third. In fact it usually took some serious “door flapping” (grabbing the knob and rocking back and forth until it sprung free on the fifth or sixth tug) to get out of the bathroom every time we used it. And forget about our poor friends and family members who innocently ducked in there and then freaked out about a minute later when they thought they were locked in the bathroom permanently (screaming and pounding usually occurred in those instances- if not at least some mumbled obscenities). 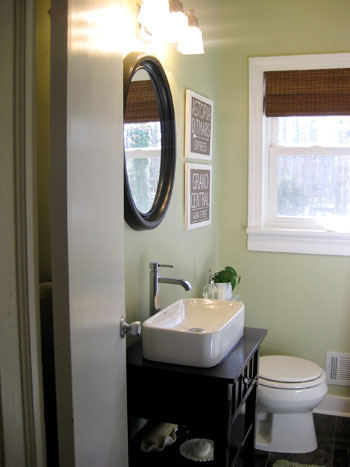 The odd thing is that we put up with this silly inconvenience for such a long time. Especially when there’s such a simple solution. One day when John had our $50-ish Black & Decker hand sander from Home Depot out (while working on something for our new office- more on that tomorrow) I mentioned that he should hop up on a chair and sand down that dastardly left side of the bathroom door to keep it from sticking ever again. 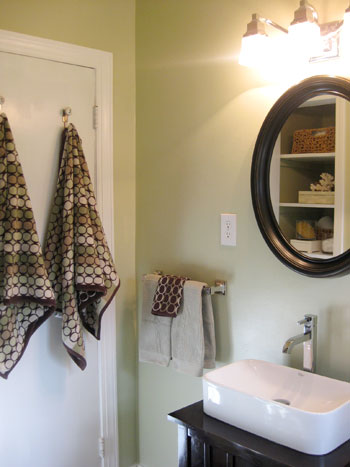 And it worked like a charm. It seriously took him less than sixty seconds of running a hand sander across the top of the door to ever-so-slightly slim it down so it no longer got caught by the door frame as snugly on those hot and humid days. And even if we didn’t have a hand sander, we’re sure about five minutes with a sanding block or even a piece of sandpaper and some elbow grease would have also done the trick. Oh and painting the top edge after you sand it (priming first = extra credit) will further keep it from expanding again, so your door will be shaved into submission for the long haul. 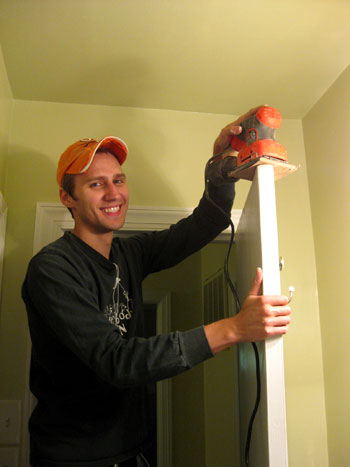 So if you have a sticky bathroom (or any other room) door that you’re dealing with, just break out that sandpaper and get ‘er done. Or you could wait four years and titter every time you hear friends and family members panicking when they think we’re trapped in the restroom forever. Either one.

And we’d love to know what simple project you guys have been putting off for weeks, months, maybe even years. It always seems like the tiniest to-do’s get put on hold the longest…