We’ve had so much fun putting together kids birthday parties with random themes like worms and dragons (complete with a fire-breathing kid photo session). Shortly after our last party post back in 2014 (remember the “Pink & Gold Everything Party“?), we took a step back from the blog for a full year, and in that time we were both curious: would our enthusiasm for going “all out” wane in the absence of an active blog? I mean, “all out” is probably a relative term. It wasn’t My Super Sweet Sixteen and there wasn’t a petting zoo, but we did our fair share of decorating and having fun with a theme and cupcake toppers and favors and all that stuff.

The answer ended up being – sorta yes, and sorta no. When our kids requested a joint party in 2015 (their birthdays are just 4 weeks apart) we thought it would be an interesting test. We definitely went easier on ourselves and worried less about busting out the camera and taking ten million photos, but we had just as much fun taking a quirky theme and running with it. 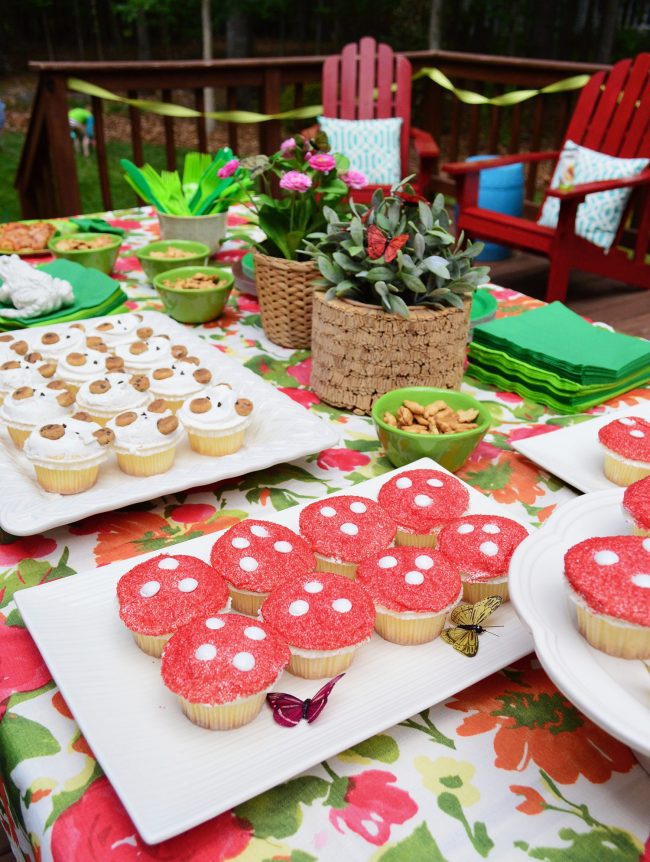 Since this was our first time hosting a joint birthday party, we looked for the intersection of our kids interests (does a 12-month old have interests?) to guide the decorations. Our little lady was going through a big fairy phase (hence the fairy garden we made for her that year) and bears are always a safe bet for our boy, so the theme mash-up landed somewhere in the “Woodland/Forest” zone – complete with toadstool & bear cupcakes, faux butterflies sitting on various items, and even some fairy poop, but we’ll get there in a minute.

The gist of the party was the same as all of our previous ones: just a low-key outdoor hangout with friends and family, much like our pink and gold party the year before. We ordered pizza, set out some sprinklers for the kids, and even busted out a piñata at one point. The whole woodland/forest theme mostly came to life in the food… or at least our interpretation of the food, which we set out on a couple of floral tablecloths that we got at HomeGoods years ago (gotta love that they’re colorful and washable – here’s something similar for anyone looking). 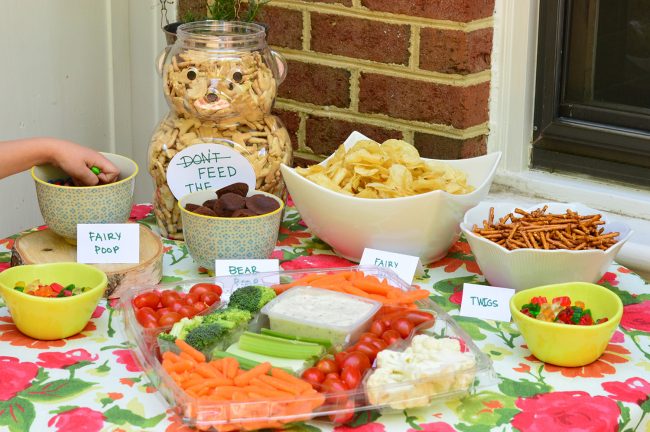 From chips that got labeled “fairy wings” to pretzels turned “twigs” we basically took party standards and gave them woodsy names (written on folded card stock right before guests arrived). Was it a stretch? Maybe a little. Did it keep life simple, make the kids smile, and bypass any the-printer-isn’t-working-and-guests-get-here-in-four-minutes meltdowns? Totally. 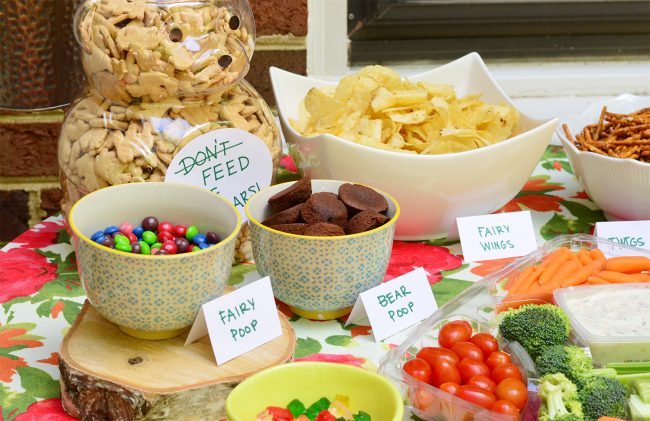 And when your guests are primarily preschoolers, anything labeled “poop” – especially when they’re Skittles or brownie bites – is sure to be a big hit. Trust me on this. 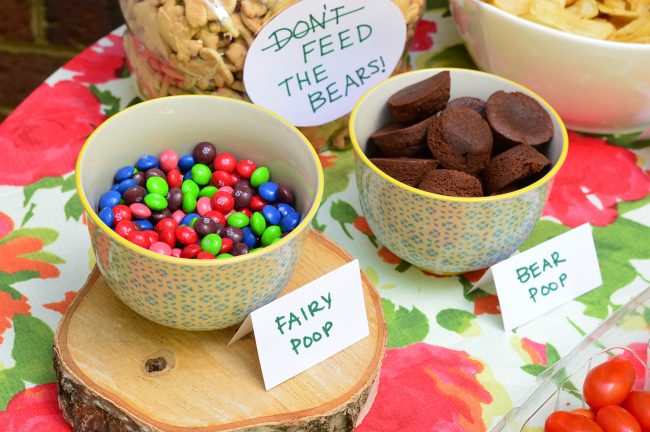 I probably had the most fun with the cupcakes, making two sets – one for the fairy crowd, and another set for the bear-lovers. My favorite party trick in general involves already-made food. So it’s not really cooking or baking as much as “hacking” or “tweaking” what you can grab at the store (remember the dragon spikes I made with AirHeads?). The base of both the bear and the fairy toadstool cupcakes were just plain white/vanilla grocery-store cupcakes, and I converted one tray-full into bear faces using some mini Chips Ahoy cookies and a couple of chocolate chips for the eyes. Literally took five minutes and the kids loved ’em. 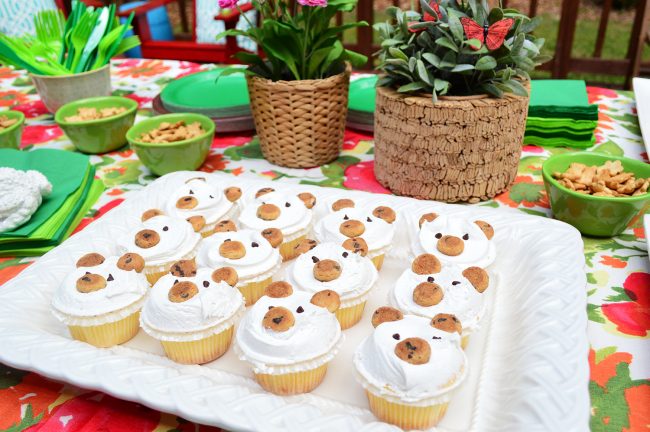 The fairy toadstools just got dipped top-down into a plateful of red sugar sprinkles (the fine kind that looks like glitter), and then got a few white spots thanks to some candies I found at the store (they were “York Piece’s Peppermint Candies” that came in blue and white – I just picked out the white ones). A wood slice “plate” I already had added some extra flair, along with some fake butterflies and a little plastic fairy. 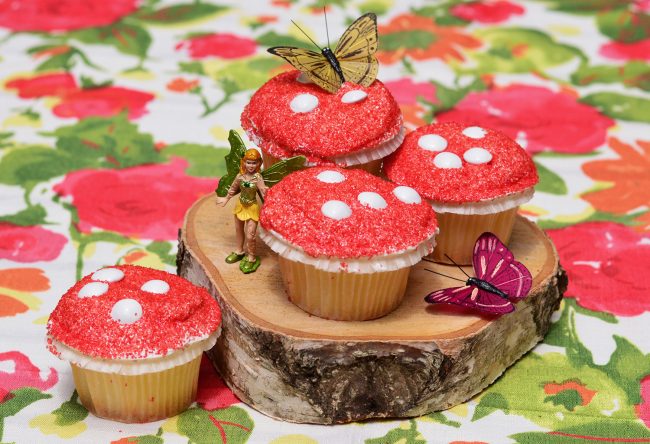 Fast-forward a year to 2016 and we found ourselves hankering to simplify our annual birthday party even more. The kids both still wanted a joint one and we all thought it would be fun to have it at one of their favorite playgrounds this time around, so we reserved a few tables under their big canopy. It wasn’t a free venue like past years, but at $50 it was still cheaper than a lot of kids birthday party spots. And this year, thanks to the impending release of Finding Dory, both of our kids were going through a big ocean phase, so we brought a singular theme (“Under The Sea”) to life in a few simple ways. Why hello there, dolphin balloon. 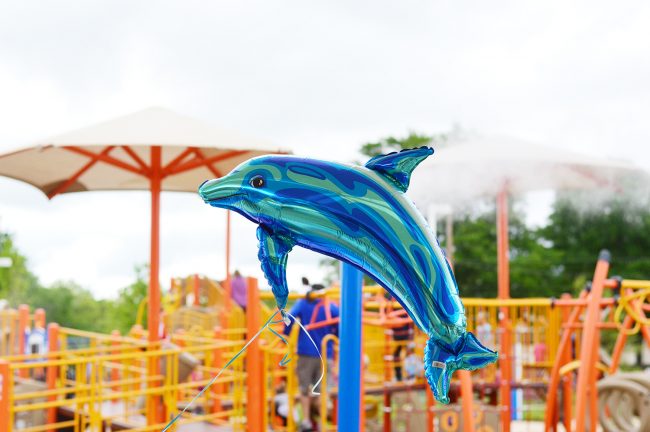 Apart from the blue tablecloths and the fish-y balloons (we also grabbed this colorful one), the theme was represented once again mostly in the food. We made it a morning party, so things were a bit more breakfast-y. Think fruit, bagels, croissants, donuts, and coffee for the grown ups. Plus I threw together a few simple sea-inspired snacks that the little ones enjoyed playing with and eventually eating (that’s high praise when it comes to young kids). 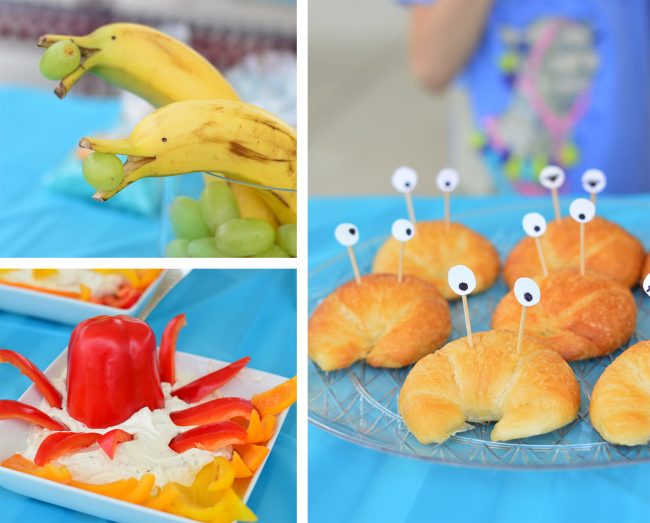 Our daughter still talks about the croissant crabs and the banana dolphins. She looked at me like I was a magician when I made these, even thought I just used some tooth picks and eyes cut out of card stock to make the croissants into crustaceans (I didn’t have any googly eyes, but drawing them looking in different directions and adding lashes to some of them was fun). And it just took slicing the top of the banana, slipping a grape in, and adding two pen dots for eyes to make the banana dolphins (despite our bananas getting a little bruised in transport, they were still the biggest hit). 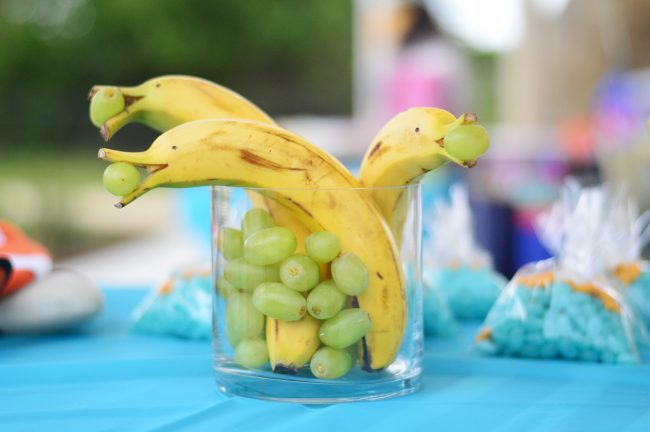 The goodie bags, which you can see there in the background, were also nice and simple (what’s a kids’ birthday party without a little sugar rush on the way out?) and these couldn’t have been easier to make. Just a handful of blue Jelly Bellys and some Goldfish crackers “swimming” on top. The clear plastic party bags are $3 for 20 at Target by the way, and I just used string I had in my craft room to tie them closed. 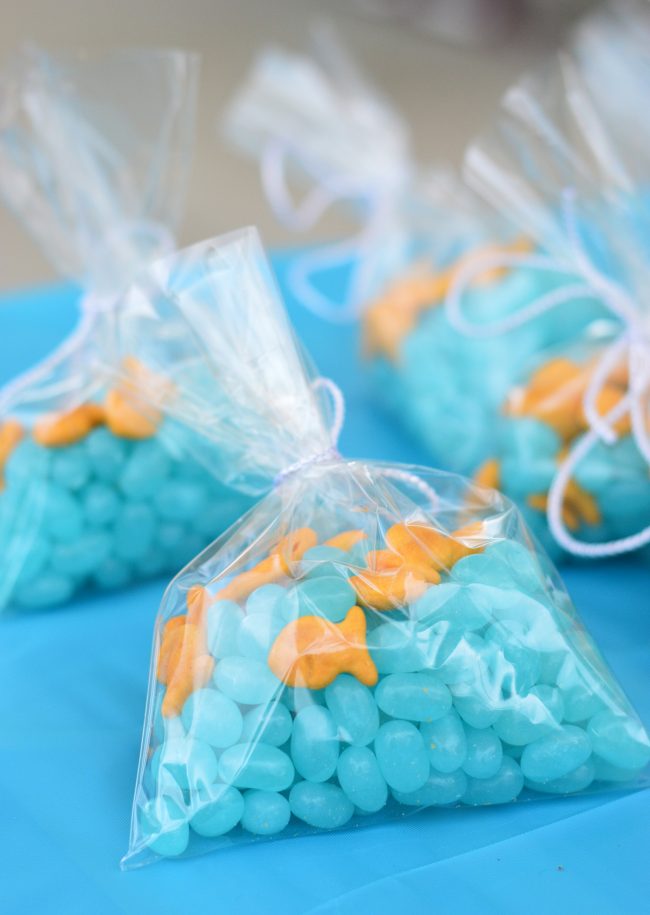 Now back to the aforementioned donuts. Since it was before noon when our kids blew out their candles, we thought these made more sense than cupcakes. They were just a few plates stacked with always-popular Krispy Kreme donuts that we picked up on the way and adorned with a few plastic sharks. I’m not sure exactly what story we were telling here: are sharks attacking the donuts? Are the donuts life preservers thrown in vain to the swimmers caught in the fray? Whatever it was, the kids were into it. 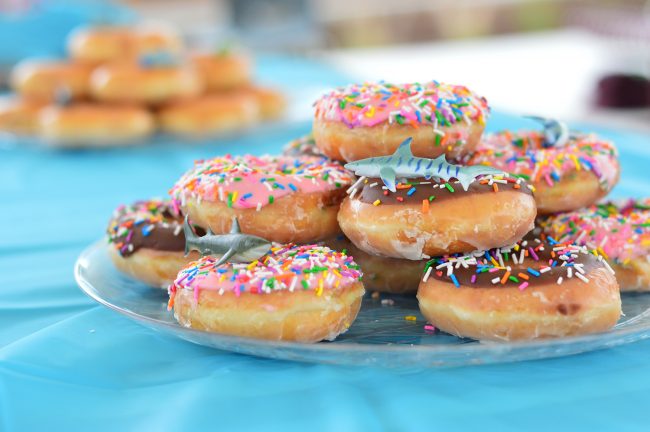 And that brings us to this year… which we actually didn’t photograph at all except for snapping a few candid shots of the kids running around and spinning so fast they might barf on the tire swing. I said at the start of this post that the last few years have been sort of an experiment in how “all out” we’d go for these parties, and I think we’ve seen a slow deceleration in how much effort and money are needed to ensure that our kids have a good time and feel celebrated (and a huge deceleration in how much time we spend documenting it).

I actually don’t think it has anything to do with whether or not we’re blogging – but as our kids have gotten older (they’re 7 and 3 now) we’ve realized they love a quirky snack or a random theme (we landed on “Bugs” this year) but they could care less about whether the tablecloth is consistent with the favors or whatever. They generally just want to be around their friends, to be sung to, and to stuff some icing in their cake holes.

So this year we sent an Evite out to a bunch of their friends for a meet-up at a neighborhood playground (no table reservation – it was free) and we rolled up with pizzas, drinks, cupcakes, a plethora of gummy worms, and some bright balloons. The weather was great, the kids exhausted themselves playing on every piece of equipment there was, and heck – even us adults had a nice chill time hanging out, not even thinking twice about the fact that the “good camera” stayed at home.