Dude, meet our disaster drawer. I know you guys already got a preview of him yesterday, but you know how a horror movie has that dun-dun-duuuuun sound effect? This drawer needs one too. It’s that bad. Like “what wild animal got in there and rooted around?” bad. So in the name of organization week (and general sanity) it was about time we got on it. 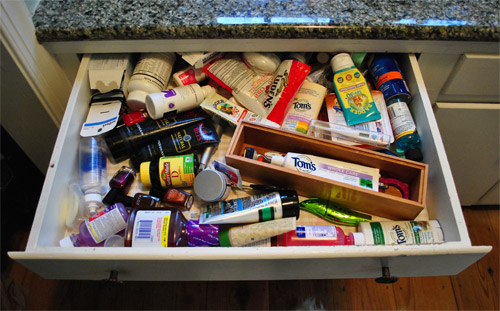 The issue is that we don’t have a medicine cabinet, thanks to the window in front of the sink, as demonstrated by this pic from our House Tour page. The drawer in front of the sink is actually a false drawer, so we can’t use that one for additional storage. Sure, we have the cabinet under the sink, but that’s where we put bigger stuff like the hairdryer and our travel toiletry bag, so it’s mainly all on this small skinny drawer to store every last little thing – like floss, toothpaste, contact stuff, medicine, deodorant, hair stuff, nail stuff, and all the other things that usually get shoved into a few drawers and maybe even a medicine cabinet or linen closet. But I knew straightening up this drawer was possible. John and I are pretty minimalistic when it comes to stuff like this (for example, I have a small travel makeup bag with all of the makeup that I own in it – which is less than eight items – and I keep that in the car or my purse, so that doesn’t need space in the drawer). We also don’t wear perfume or cologne, so there’s no need to store that or any bath salts or scrubs (we’re shower people). In short: we don’t have that much stuff when you consider that this is a pile of all the medicine, tooth stuff, nail stuff, hair stuff, and general hygiene stuff in our entire house except for one pot of diaper cream in Clara’s room and a bottle of body wash, shampoo, and conditioner in the shower.

So we just had to figure out a way to wrangle it so it was functional (ie: so we could actually find what we were looking for). The first order of business was removing everything so we could see the bottom of the drawer again and take inventory of all the things we had. I went through everything and got rid of things like expired medication or empty bottles that somehow got shoved back into the mess. 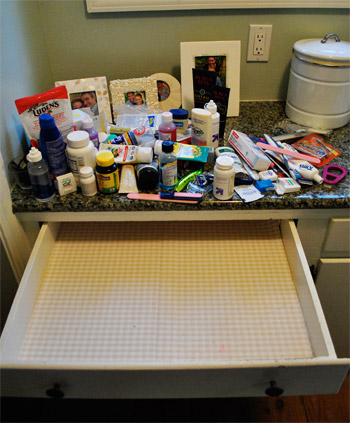 Then I grabbed two divided boxes at TJ Maxx to the tune of $9. I think they’re meant for office supplies or jewelry, but they were the right height for the sink drawer and I knew the key to adding some order would be to segment things off and create zones to keep things from slipping all over the place every time the drawer slid open. Here’s what I came up with after I stuck those two containers in the drawer along with the wooden toothbrush/toothpaste box we had from a while back and filled them all up. 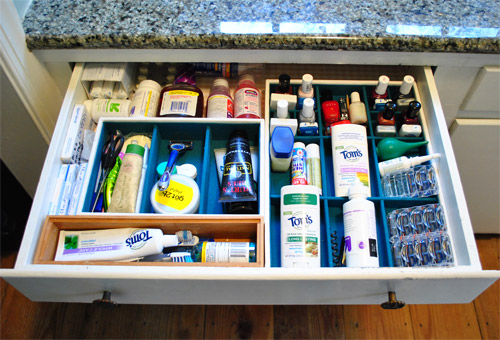 Some of those cubbies, like the three in the middle of this picture are just items that are grouped by owner. For example, the one on the left is my stuff (an extra concealer and mascara that came packaged as a set of two so I only put one in my travel makeup pouch, my hair-cutting scissors, a nail file, etc) while the middle cubby is where John’s hair stuff and razor and contact case live. That cubby is sort of his morning routine (although he doesn’t shave every morning – maybe just every three). The cubby to the right of that is also John’s shaving stuff (shaving cream and aftershave) – so putting them next to each other and keeping my stuff out of his cubbies will hopefully make it easier to keep up with this system (he won’t be messing with my areas and my stuff won’t be in the way of his). 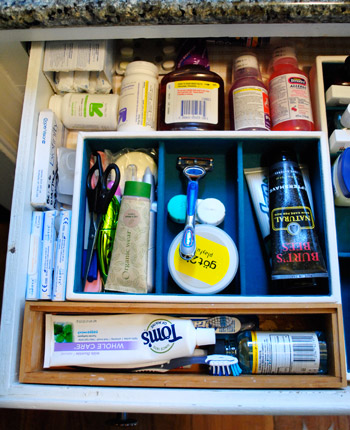 Medication safety update: All the medication is in childproof containers and those razor blades snap into a protective case that Clara couldn’t unsnap on her own (at 23 months old, Clara can’t open non-childproof bottles or even tupperware containers) and we keep the door to our bedroom closed so she is never in there unattended (since Burger’s food is in that room and she likes to mess with it, haha). So there’s a no-Clara-in-the-bedroom rule unless we’re in there with her.

Here’s the other side of the drawer again, just because I thought for a shot of random bathroom stuff, this was kinda pretty. Haha. 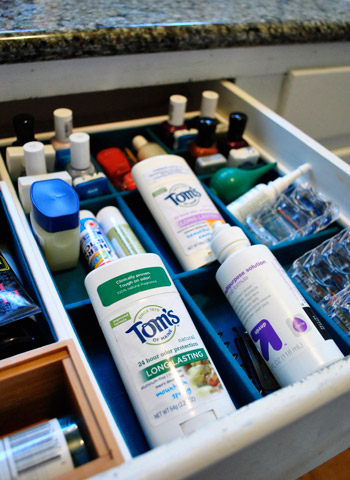 So yay! We finally got on that. I just hope it stays this way. It has lasted through one evening and one morning routine, so I have a fair amount of hope. I gave John a stern look and said “please respect the cubbies” and so far he has been awesome about it. But I’ll have to take a random photo in six months to see how this whole shebang really fares. You know I’ll keep it real and report back, whether it’s still looking good or somehow has exploded into chaos again.

The sad thing about getting on this project is that in doing it I noticed another task that I need to add to the list: painting these cabinets and drawers- both inside and out. See that dinged up looking lip? Now that things are nice and organized inside of the drawer I notice it even more. Why is it that one upgrade often just shines a big ol’ spotlight on other things that still need to be attended to? Oh well. Someday I’ll get on that. 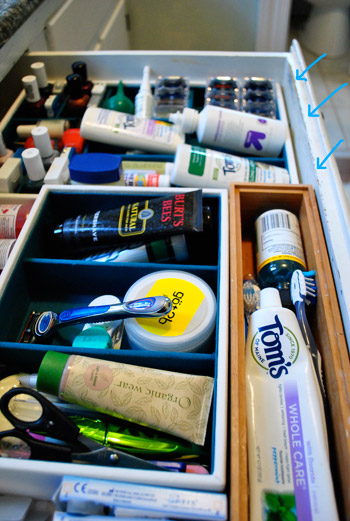 Just for fun, I snapped a picture of the cabinets under the sink. I told you we were minimalists about this sort of stuff. Just an old box from John’s grandpa full of a few John things, our travel toiletry bag (the black thing in the middle) and a basket with a hairdryer, a brush, and a curling iron among some other random items in the back. But see those blue arrows? Those are other dings and smudges I noticed while cleaning up. Someday I’ll conquer them. Although probably not anytime soon if I’m being honest. Haha. 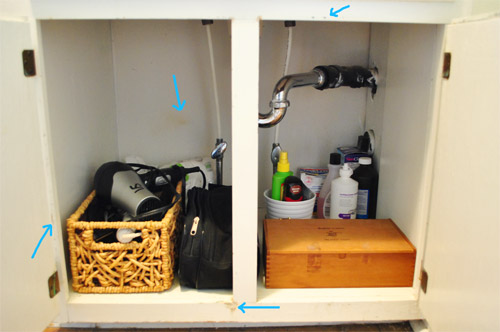 Until then I’ll just appreciate being able to check if we need more floss or razors at a glance while grabbing the deodorant without having to wrestle any other toiletries out of the way. It’s the little things.

We’ll be back tomorrow with a huge rundown of all the grooming & cleaning products that we use in an attempt to keep it simple (many of them multitask, so we don’t have to store ten million different bottles under the sink). What have you guys been organizing lately? Have you found things like dividers or cubbies to be helpful in instances where you have only one shallow area that needs to store a bunch of different things? Who’s tackling their bathroom stuff tonight? And is it weird that I brushed and flossed after this project? Staring at all that stuff somehow compelled me to end things like that – just to test out my storage system I guess. Haha.

How We Organize Our Kid Clutter
The Simple Life: Living With Less (And Loving It)