Favorite project ever! Okay, not really at all. (I just couldn’t help trying to match Sherry’s enthusiasm from yesterday’s post), but this is a nice simple way to update basic garage doors so they look a little more stately. Back when we had our house’s exterior patched & painted right after moving in, we opted not to get the garage doors painted since we knew it was a task that we could easily tackle ourselves. Well, 12 months later and it’s finally done. 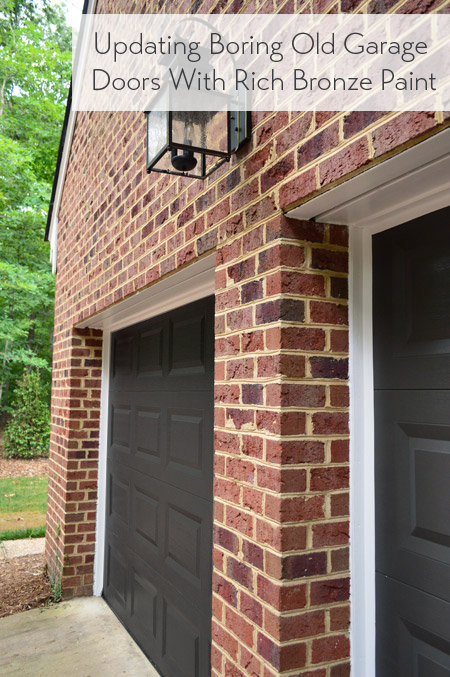 These two doors were sporting the same cream color that the old trim was before it went white, which wasn’t a very good look since it was nixed everywhere else. So we debated going bright white, medium gray/brown like the siding, or with a nice dark gray/brown color that’s a few shades deeper than the siding (like the tone of our metal window frames with the white sills).

Talking about those options pretty much got us nowhere, so we hopped in the car and drove around the neighborhood. We saw lots of white doors and black or deep gray/brown ones, and even some medium gray ones. And after staring at them all like neighborhood creepers, we decided that rich dark ones on a brick house was our favorite combination. 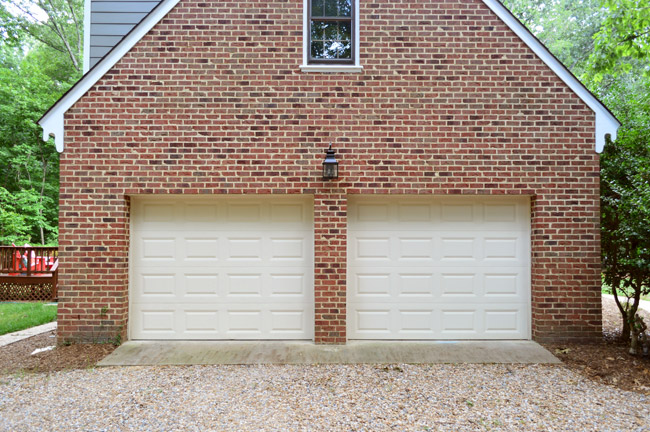 I kicked off the paint-fest with a cleaning party, courtesy of a hose-down (note: not nearly as fun as a hoedown) and a wipe / dry session with a rag. 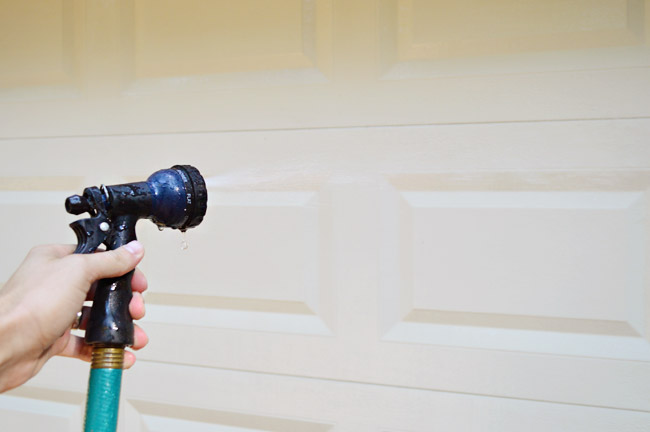 This painting task quickly promised to be more involved than our previous rendezvous with a garage door, mainly because there were some added maintenance tasks involved – like redoing the patchy caulk around the weather stripping trim. 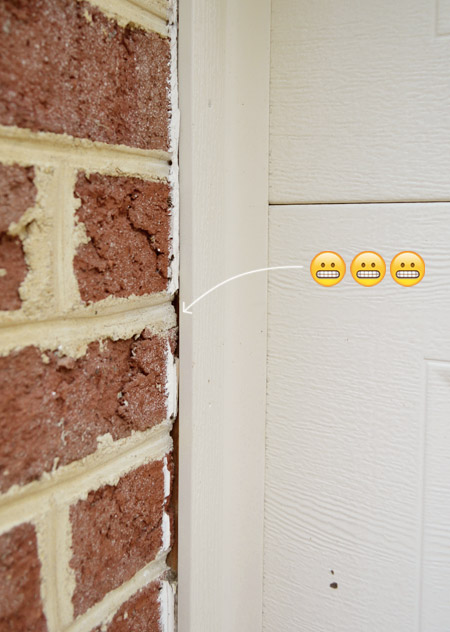 Since I know I’d be re-caulking anyways, I figured I’d go ahead and remove the weather stripping entirely since it would make my paint job easier and more thorough (I’d be able to paint all the way to the edge of the door, rather than stopping at the weather strip, which could shrink back in colder months and show an obvious unpainted line). I used my crowbar to pry off each strip, and then used a spackle knife to scrape off as much of the old caulk as I could. 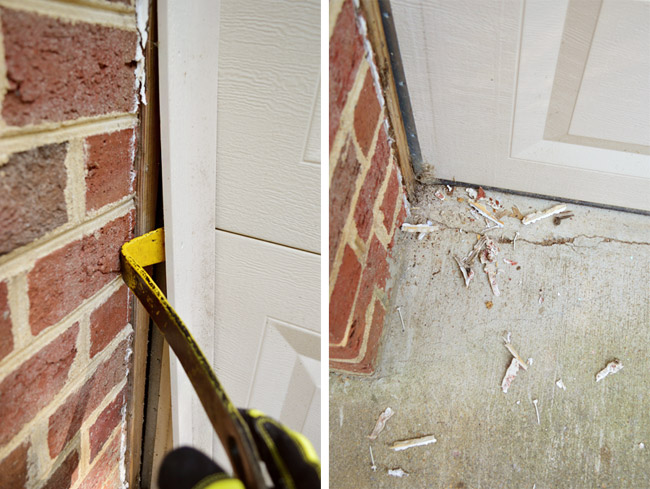 These weren’t tough tasks, but they ate up about an hour before I could get to actually painting anything. 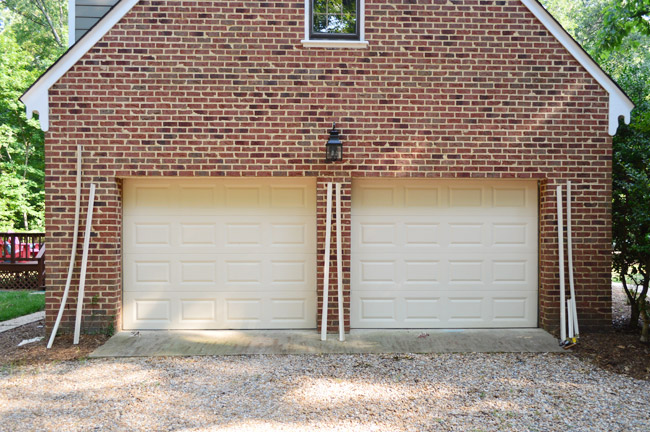 The paint color we chose was Urbane Bronze by Sherwin Williams, which was the darkest color on the same swatch as our siding color (Anonymous) which pretty much guaranteed that they’d go well together. 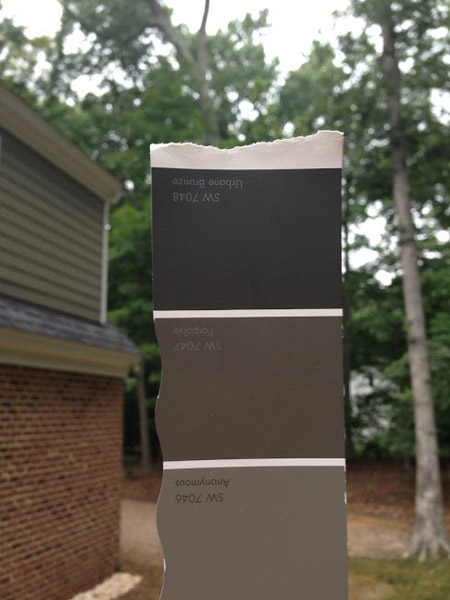 We bought a gallon of it in their Duration line since that’s what the house painters used and loved (it’s supposed to be extra durable and even has exterior primer built in). The Urbane Bronze color was nearly identical to the color of the dark metal window frames and oil-rubbed bronze light fixtures around our house, and it even tied into the charcoal roof pretty nicely, so it was an easy choice. 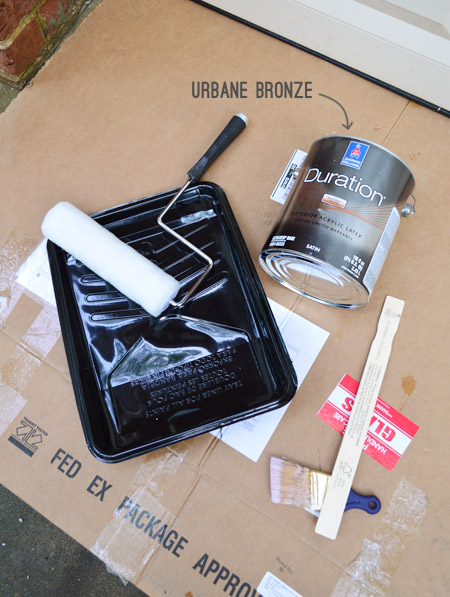 Painting was a combination of brushing (around the recessed panels and edges) and rolling (everywhere else). I worked in small sections so that the brushed portion didn’t dry and become tacky before rolling. 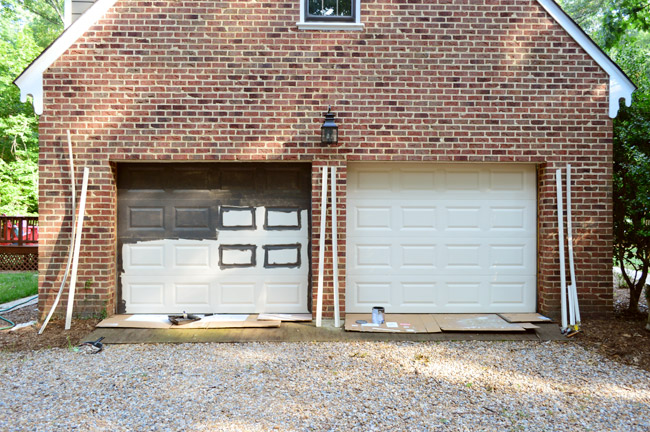 The first coat was fairly spotty looking, but that’s to be expected. I was just happy the second coat was enough – although it’s hard to tell in this photo since the sun spots are making it more uneven looking than it really was. 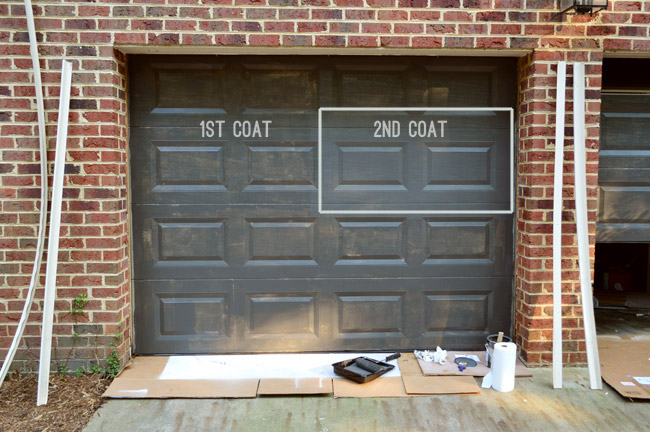 After the main part of each door was painted, I also raised them up bit-by-bit so I could paint the cracks in between each section of the door. That way it didn’t flash stripes of cream color every time the doors went up and down. This took a fair amount of patience because I had to let each part dry before raising the door a little more to do the next one. 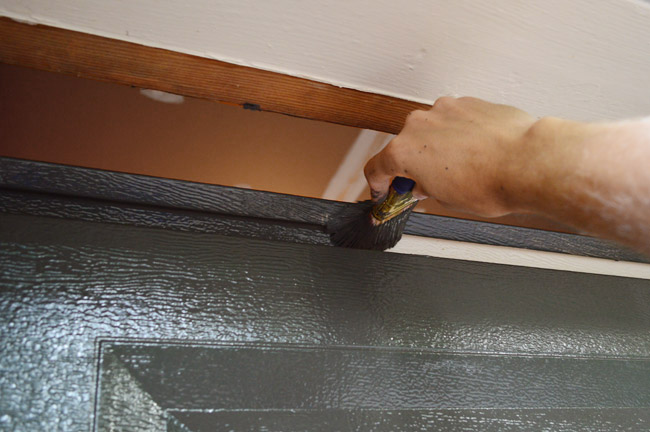 The next day, once everything had dried, I reattached the weather stripping and recaulked the edges. I hate caulking against brick because it’s basically impossible to get a clean line against the craggy surface (I’ve tried painter’s tape in the past, but the result wasn’t much better), but since I was already working against the previously uneven caulk/paint job, I wasn’t going to beat myself up over it. 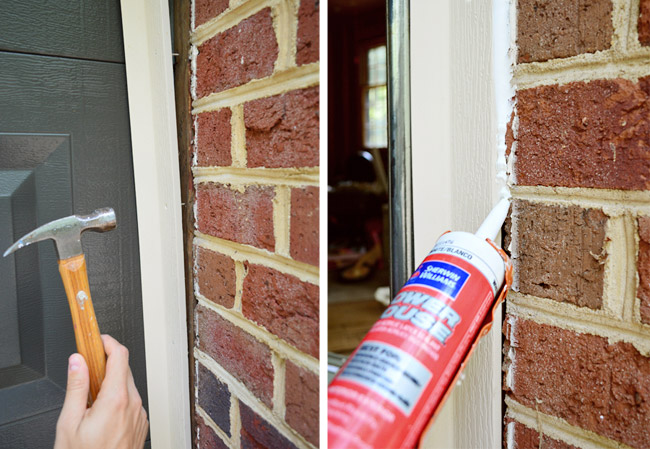 We actually contemplated painting the weather stripping Urbane Bronze to blend with the door, but after staring at it (and a few of our neighbors’ garage doors again) we decided going white like the rest of the trim on the house (Snowbound by Sherwin Williams) was the better bet. I opened the garage doors when painting these so I wouldn’t have to worry about getting any paint on them, which made this step go pretty quickly. 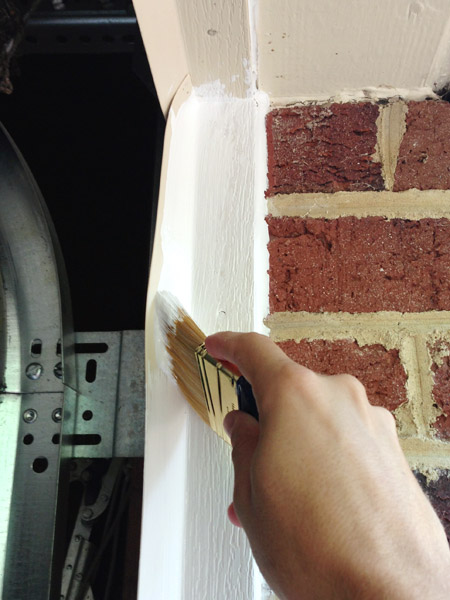 After a bit more drying, and a second coat, we were officially back in business. And by business, I mean Clara could reclaim her favorite chalking spot. Just don’t look too closely – that needs a nice power wash. 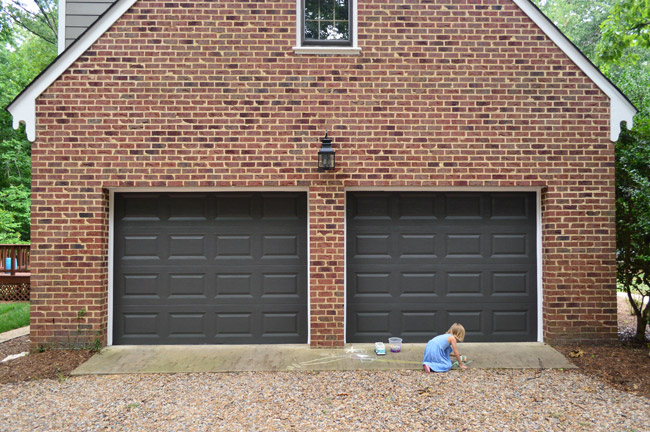 Oh and we also contemplated adding some decorative hardware, like some handles or what-not, but none of the options that we found felt like a good fit for our doors. We might try hunting a little more online, so we’re open to suggestions if anyone’s got some. 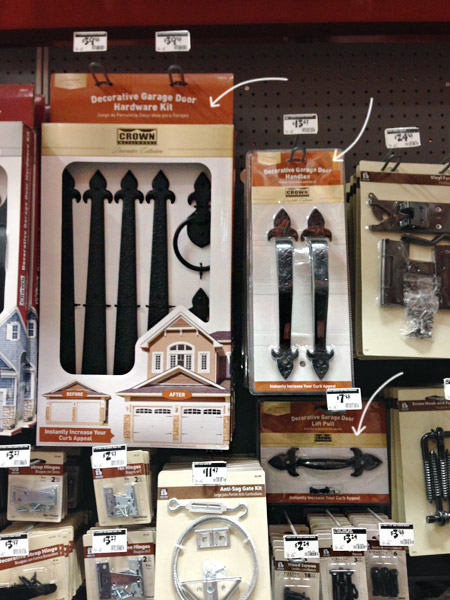 In addition to just being glad the cream is gone, we also like how the darker doors seem to tie in with other dark accents – like the light fixture and those dark metal window frames. 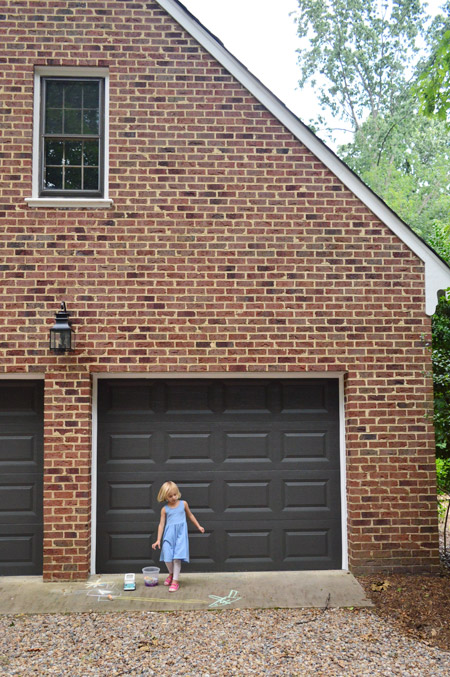 Overall, it’s not the world’s most exciting update, but it feels good to have it checked off the to-do list (finally). They feel like they ground the house a little better and don’t get lost in the beige-iness of the surrounding driveway and walkways. 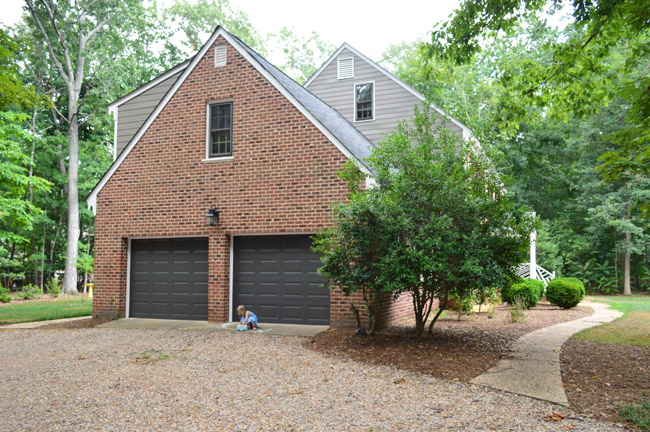 Have you guys painted your garage doors? Did you slowly drive around the neighborhood to check out other door ideas like a creep? All of the homes around us have their garage doors on the side of the house (like ours) so that made it especially neck-craning for us, but thankfully nobody called neighborhood watch on us. That we know of.

Wallflowers (aka: How To Cover A Wall With Fabric)
A Little Less Conversation, A Little More…