I owe you fair warning that this post might give you the willies. It’s a horror story from my renter days that I wanted to share in hopes that it may help someone experiencing something similar.

When I made my post-graduation move to New York City in June 2004, I rented a two-bedroom apartment in Astoria, Queens with a college roommate. It was less than nice, but my roomie and I were just happy to find a place with big bedrooms with cheap rent. All in all, it seemed like the perfect place to cram with my seen-better-days IKEA furniture, “decorate” with cheap posters and kick off life as an adult. Little did I know I’d actually end up living like this: 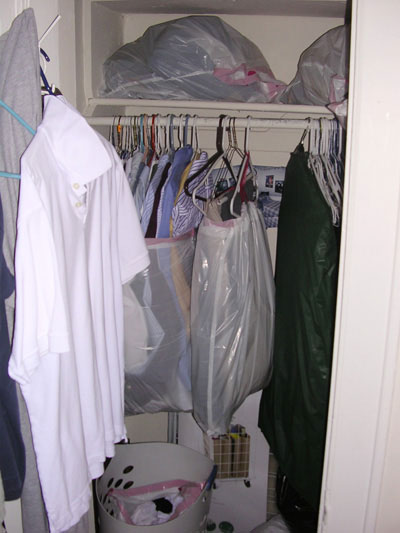 But let’s start at the beginning. I randomly woke up in the middle of one August night and headed to the kitchen for some water. I turned on the light and immediately noticed a small, brown bug sitting on my shoulder. As I turned my head to flick it away I saw several more crawling down my back. Naturally, I got some major heebie-jeebies and ripped my shirt off so fast you would’ve thought it was on fire.

I darted back to my room, figuring I’d accidentally left my window cracked and let some flies or gnats creep in. When I turned on the light I saw two things: (1) closed windows and (2) several dozen bugs swarming my bed and the surrounding walls. Gross, gross, gross.

I started to kill the ones I could catch, but quickly realized they were appearing faster than I could squash them. I turned to my next best defense: the Internet. Some quick Googling revealed that I had a bed bug infestation (I know what you’re thinking – ewwww)

Bed bugs are very real. They’re small (pencil eraser sized) flat insects that are nocturnal and feed on warm-blooded creatures, which certainly explains their love of sleeping humans. It’s rare that you catch them in action like I did, so most people detect an infestation from the bites they find on their skin. Both my roommate and I had lots of those (she even had one on her eyelid) but made the common mistake of assuming they were just mosquito bites. You can also look for stains on your bedding: both their droppings (small black dots usually at the edges of your mattress) and blood stains (when you roll over and “pop” one that just drank). Gross, I know.

So how did we get bed bugs? They’ve been making a resurgence in the US lately, especially in big, transient cities like New York. Despite popular belief, an infestation isn’t an indication of  filth, but rather a a result of increased international travel (frequently found in hotels, bed bugs come home on your suitcases and clothes) and decreased use of DDT in pesticides (assuming they were mostly gone, people stopped making chemicals to kill them). How they made it to our apartment? No one really knows- except that our wall-to-wall carpet surely didn’t help.

Unfortunately, bed bugs are notoriously hard to get rid of. We were told it often requires multiple applications of a pesticide to ensure the problem is gone. Our (somewhat shady) landlord was too cheap to call a professional, so he hired a friend to spray our place with some mystery chemical in all the cracks and crevices around our apartment (this involved dismantling all of our IKEA furniture- bed bugs love dowel holes!).

In addition to the pesticide treatment (which I will admit wasn’t very green at all- but we were getting eaten by bugs at night and our landlord wore the pants), my roommate and I had to take several steps to help ensure that we quarantined any of the bugs that miraculously escaped the chemical treatment. This involved washing all fabrics in hot water (keep in mind this meant lugging ALL of our clothes, sheets, and towels two blocks to a laundromat) and then storing them in plastic for 2 months. Bed bugs apparently have trouble walking on slick surfaces like plastic or metal, so keeping everything in trash bags helped keep them from stowing away anywhere new. So that’s why my closet looked like this for 8 weeks:

And since the bugs could still be living deep inside our mattresses, we were advised to buy plastic mattress covers (with zippers!) and leave them on until we could afford new beds.  And since checking for bite marks in the morning was the the only way to tell if the problem was solved, we had several unsettling nights where we basically “sacrificed” our bodies to be sucked on for the sake of seeing if they were gone. Here’s a pic of me before bed one night on my sheet-less, plastic-covered bed. Despite it being summer, I covered myself in as much clothing as possible to limit my bite count. Oh, and that annoyed look is 100% intentional too. 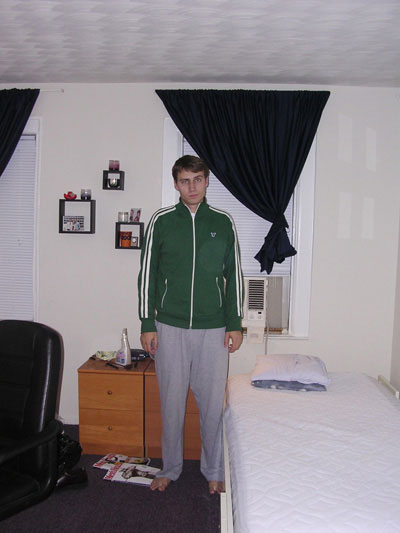 After a couple of weeks of biteless nights, we officially declared ourselves in the clear. In the end, it had been about a 12 week ordeal. I’m usually not one to freak out about bugs, but these suckers (literally) caused an insane amount of distress – from arguing with our landlord over who was responsible for treatment to eventually replacing every piece of furniture I owned (not ’til I moved out, mind you). I truly wouldn’t wish bed bugs on anyone.

But bed bugs aren’t the end of the world. If you find yourself infested, do your research, rely on professionals and brace yourself for a few weeks of  uncomfortable living. Hopefully in the 4+ years since my ordeal their treatment methods have improved. The best treatment for bed bugs is obviously prevention. When traveling, check hotel mattresses for stains and keep your suitcase off the floor. At home, keep your carpets vacuumed and if you think you’re at risk for an infestation (lots of globetrotting guests, for instance) think about coating the feet of your bed in Vaseline or sitting them in a tin can so the bugs can’t travel from the floor to the mattress (bed bugs can’t fly, so as long as things are slippery they won’t be able to bridge that gap).

Hopefully this long post hasn’t put you to sleep. But if it did, I’ll hope you slept tight and didn’t let the… well, you know the rest.