Don’t eat while you read this.

This is the story of removing the sliding shower doors in our bathroom. It was one of those can’t-do-this-soon-enough tasks that was at the top of our list. 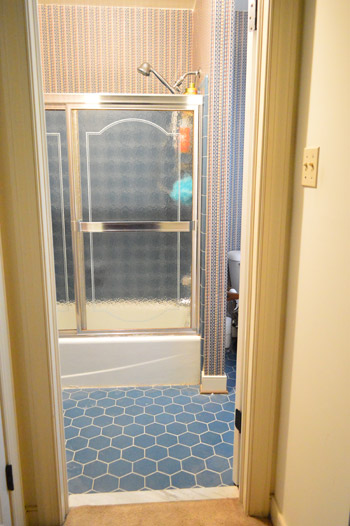 Not only did they enclose the tub in a way that a soft white fabric curtain wouldn’t, they had seen better days. So there were lines of rust around them… 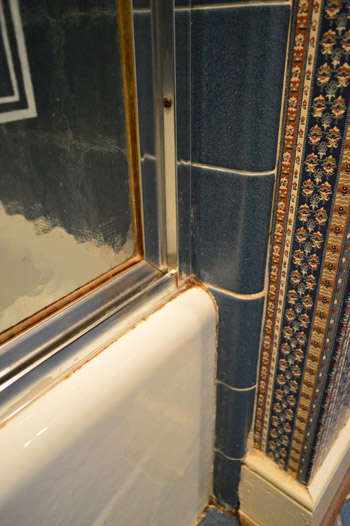 … and pretty impressive amounts of caulk that seemed to be holding them together. 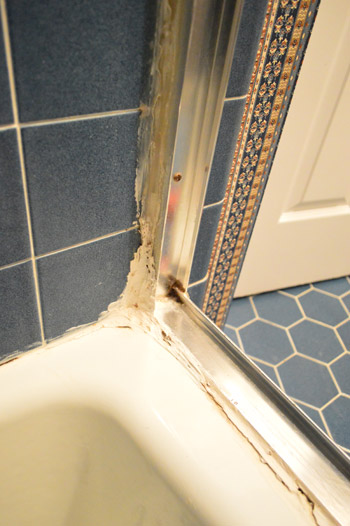 Plus their height was oddly low, so John hit his head (not once but twice) while climbing in. Fool him once, shame on the shower doors – fool him twice, shame on John. Here’s a good ol’ fashioned fully-clothed reenactment for you. 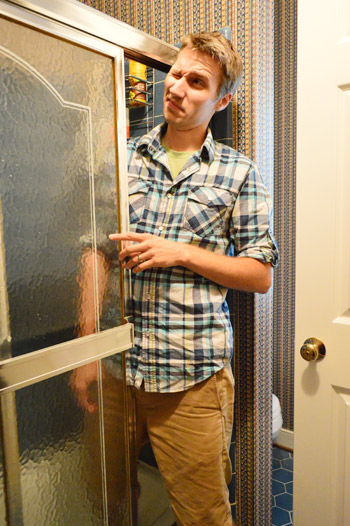 Apparently he likes those (exhibit A, exhibit B, exhibit C)

Anyway, the first scene to Get Those Dastardly Doors Down (the movie) involved swinging them out at the bottom so they could be lifted away from the track that held them in place at the top. 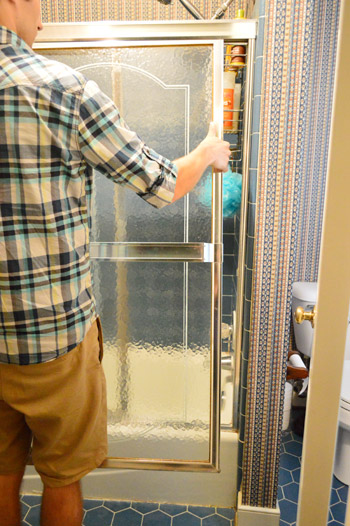 The top frame actually lifted right off after we did that, and then it came down to removing a few screws on each of the side frames to free them from the wall. 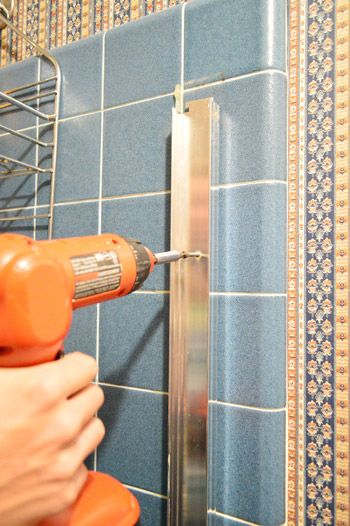 At least that’s what we thought. And then we remembered all that caulk. So we needed to score (and score and score) those wads of silicone to get those frames free. 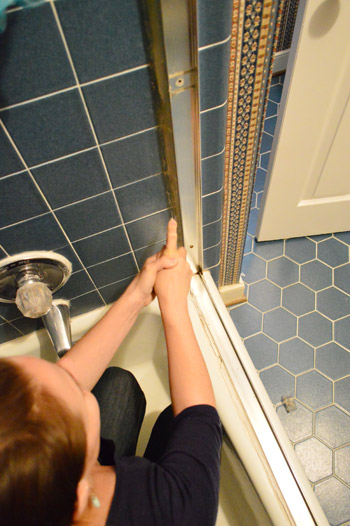 When they came off it kind of looked like they were coated with icing. Except substantially less appetizing. 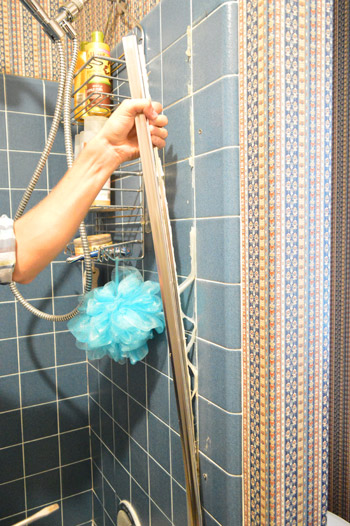 Second warning. Seriously, stop it with the pop tart. Put it down.

Last warning. There’s no button to un-see this.

We then discovered this thick layer of scum that was living under the frame on the bottom of the tub, which wasn’t screwed in. So it just lifted off to reveal this tasty sight of 3D mildew and general nastiness. I used a flat razor to scrape the scum (check out my veiny hands – I think they bulge when I’m trying not to gag). 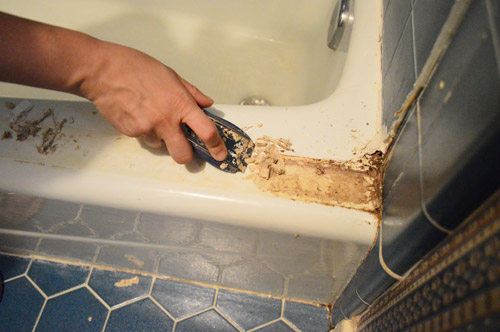 Then the tub looked like this, which is nice and open from afar. 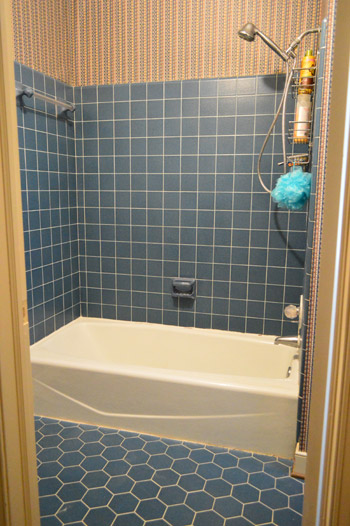 Even the spots where the frame was screwed in were pretty small (so a dab of silicone caulk in each one sealed them off, and once we hung the shower curtain we knew they’d be obscured even more). 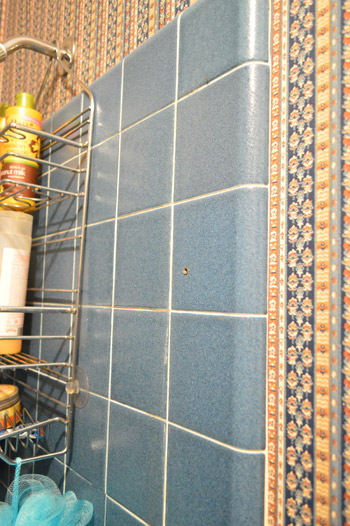 But if you got a little closer, the issue was the caulk around the tub. 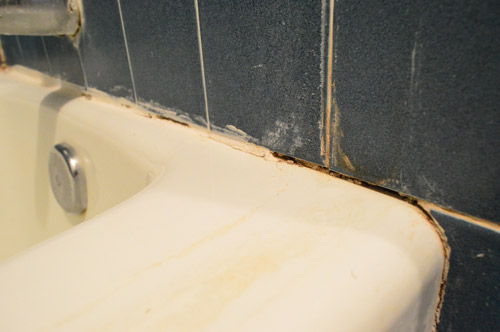 Many areas were missing caulk completely, and some had pink-ish mildew or even old rotted brown spots (don’t even know what caused those) but one thing was clear: we needed to strip off the old caulk and re-caulk the entire perimeter of the tub and even down the sides and along the base at the floor. So we used a combination of a box cutter and this little plastic tool that we grabbed at Home Depot for a few bucks (it has a razor in the middle of the V to help slice while it pulls the caulk away from the wall). 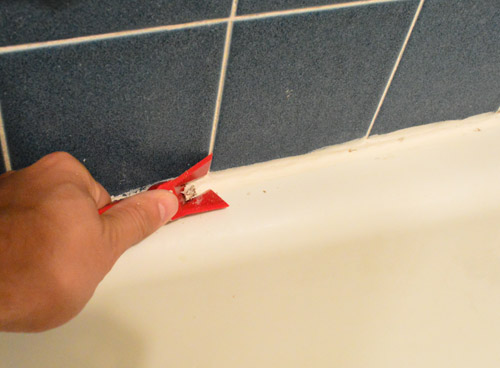 That tool didn’t work along the bottom of the tub (couldn’t really grab the caulk there along the floor) so out came the box cutter again. 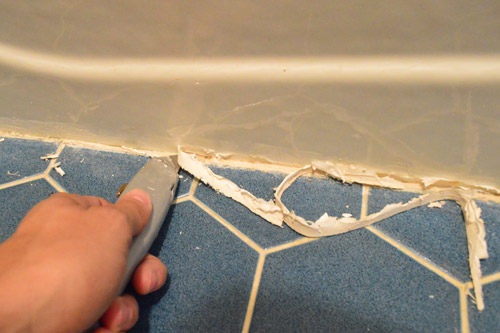 About an hour later (took a while, but it was pretty satisfying work) we had this caulk collection going on. 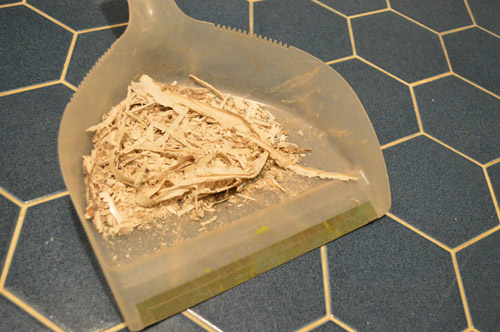 Then it was time to get some fresh stuff down. Be sure to use something silicone that’s meant for a tub/shower (we like the white colored stuff over clear caulk since it blends with the tub). Oh and we taped off the top edge so all we had to do was smooth it with our finger and then peel off the tape while it was still wet for a nice clean line against that dark tile. 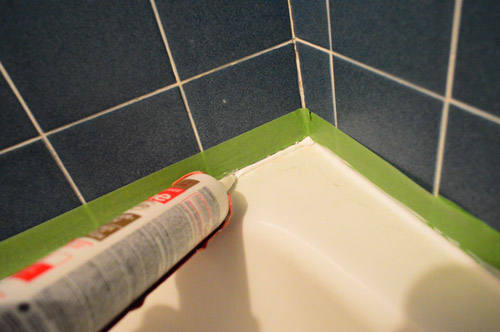 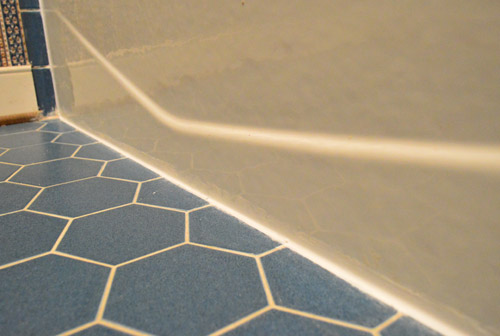 Then after it all dried we hung our extra long shower curtain with a tension rod from Home Depot and it finally felt clean and airy. The to-the-ceiling-height always adds some nice “head-room” so it feels a lot less cramped to us (and it’s never dark in there since light passes through white fabric really easily). 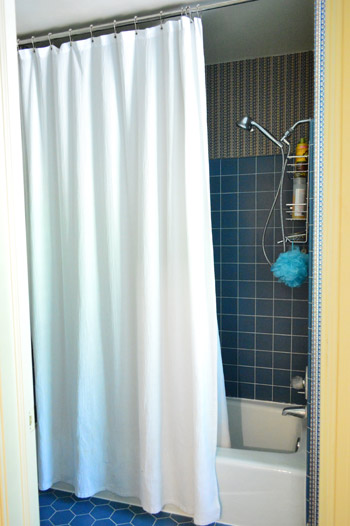 Our 95″ waffle weave curtain originally came from amazon (but we hear target.com occasionally sells them too). We got it years ago at our first house and it has held up nicely since it’s 100% cotton and can be tossed in the wash (we have an extra long white fabric liner from Bed Bath & Beyond that hangs on the inside of the tub to block spray). As for why it came with us, shower curtains don’t stay like regular curtains when a house sells down here – probably because they can be pretty decor-specific and are universal in size – so they work in your next house in a way that certain height curtains or certain width blinds wouldn’t.

One thing’s for sure: a little caulk and a new curtain can definitely made a big difference. 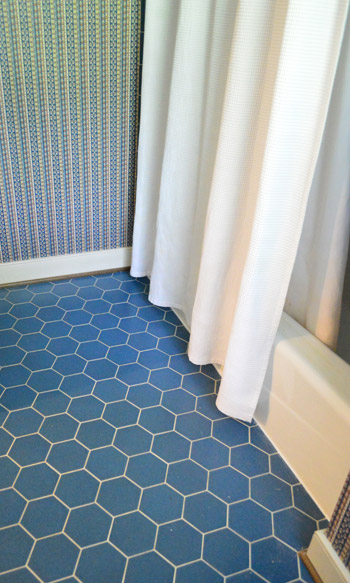 As for the fate of this bathroom, there’s some tile damage around the toilet and sink as well as at the top corners of the shower and of course that wallpaper’s days are numbered, but we plan to live with the tile for a while and then eventually expand the bathroom’s footprint into the sink nook area so we have one big space instead of two smaller choppy ones (having one sink in the bathroom and one right outside of it instead of one big bathroom with a double sink just isn’t our preference). This post with a floor plan might help you visualize things.

So it should be fun to reconfigure this room down the line and retile/add a double sink/etc. But we like living with a space for a nice long time before doing dramatic reno (who knows, we might completely change our mind and go a different direction after thinking it through). In the meantime, I sort of love the blue hex tile, so we’re going steady for now. I’d insert some joke about how it sees me naked all the time, but my mom might text me about it (yes, she texts now, which is hilarious and awesome).