*Thanks so much for all of the kind words and the love that you guys shared after yesterday’s post. It was so touching to read all of your stories and memories.

A few weeks ago when Clara saw a canopy hanging over her friend’s bed, she was immediately in LOVE. As in, she put in a request for “daddy and mommy to build a canopy with a hammer and some blankets” for her right that second. Not surprisingly, we were in. Just not for the whole hammering blankets thing… 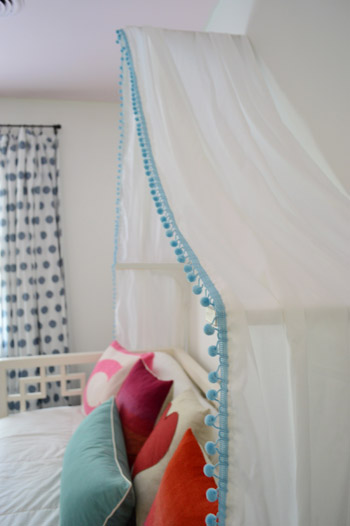 We love that it’s something she requested and that it adds more playful personality to her room, Heck, it just might get her excited enough to sleep in her daybed (yes, she’s still happily snoozing in her crib, but seems closer to making the switch every day).

So the first thing we did was grab some spare fabric that we had in my stash, not for color, but just to see if the shape that we liked most (something like this) would work, and to figure out how many yards we’d need. Oh yeah, and the first planning stages of this happened before we painted her room/closet/ceiling, but then we realized we should do that before hanging the canopy, so room-painting jumped the line. 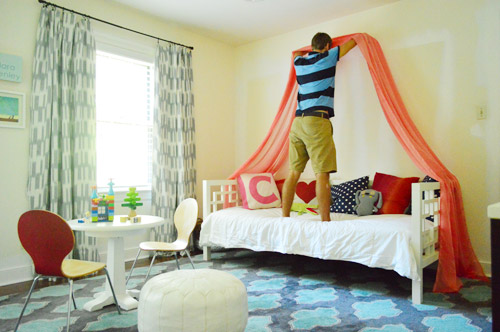 Next, John made like Superman. Because, you know, that helps during any project. 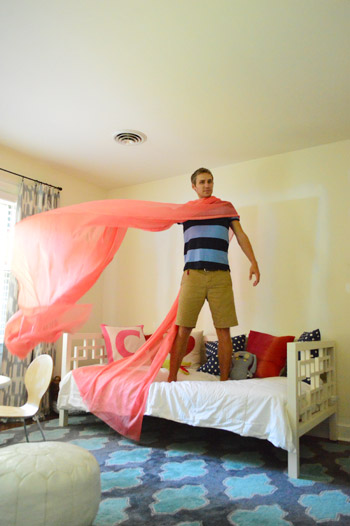 The next day right before we hit up the fabric store I remembered we had some old sheer curtains that John could hold up so we could get a better idea of how white would look. With so much pattern in the rug and the curtains along with the art that we’re planning to rehang from her last nursery/playroom, we thought white with some colored ticking or fringe would probably be the best choice for a playful but not too circus-y canopy that would hopefully work in her room for a while, even if other colors/accessories change with Clara’s taste as she grows. 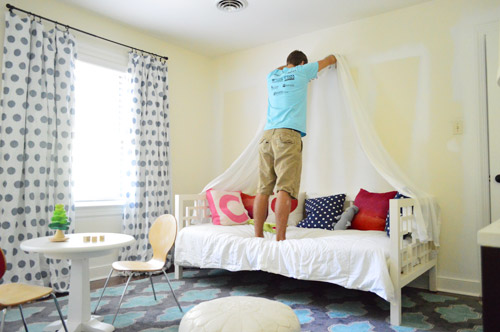 We liked how the white sheers looked but they were a little bland without any trim (which further confirmed that we needed to grab something colorful and fun to accent them) and they were a little short on each side. So we used them as a placeholder and measured how much more yardage we’d need to create a similar canopy that’s long enough to drape fully over each side of the bed. The magic number = six yards.

We scored bigtime at Hancock, getting all six yards of washable cotton/poly blend fabric for $20.94 thanks to a 50% off coupon that I found on their website (they just scanned my phone). We also found enough turquoise pompom trim to line the entire outside edge (another six yards) for some added flair. Clara was actually the one to point it out slash pet it first (my girl!) so that sealed the deal. Well, that and the 60% off markdown (it came to $9.54 for all of it). I was especially excited about the pom pom trim since seeing this canopy with pink poms. I think it just adds so much fun-factor. 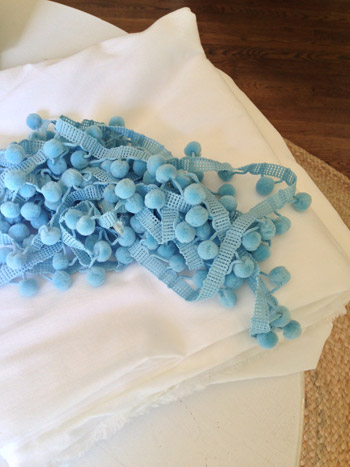 After washing my fabric (that way it’s all pre-shrunk and ready to go) I hemmed in on all four sides. I actually did a double hem – folding it over and sewing it once, and then folding it again and sewing the edge one more time, just for a completely finished look on the inside so there’s nothing stringy hanging out since we figured you’d see the inside of the canopy while laying in bed. 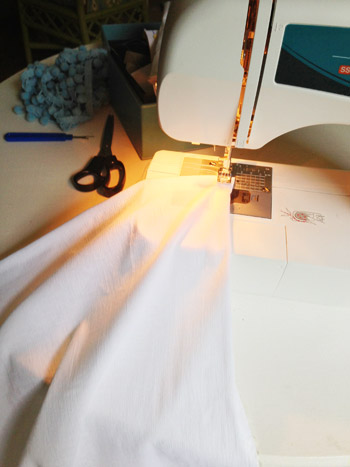 Let me tell you… double hemming a giant 18 x 4′ sheet of fabric on all sides takes quite a while – at least for a #reluctantseamstress like me. But I sort of got in the zone, especially on those two 18′ long sides, and just plugged away until it was done. Afterwards I used my iphone calculator to determine that I completed 88 feet of sewing since it was 44 feet around, twice,  which was oddly satisfying. It’s like learning how many hot dogs can circle the Earth’s equator.

Next was the fun part… adding the pom pom trim. I just sewed that to the front side of the canopy along the entire 18′ edge. 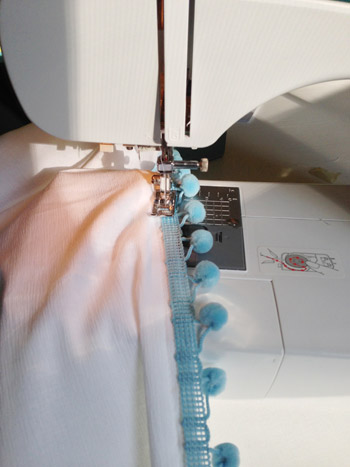 All told, it probably took me about four hours (again, I’m a terrible sewer, so I’m sure someone else could whip this out in an hour). But I’m in love. The fun pom-poms tie into the colors in the rug and the curtains (a ton of her to-be-hung art is that color too) as well as being super fun for Clara to gaze up at. 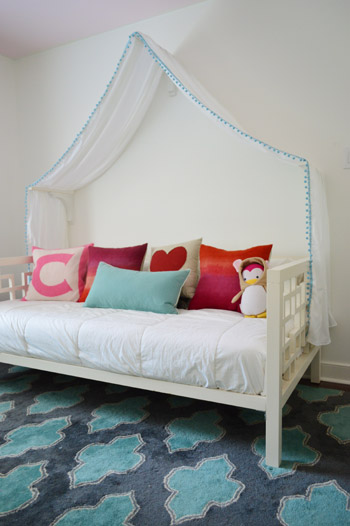 As for how we hung it, we actually used the same decorative wooden brackets that we used in our kitchen. Remember we removed these two extra brackets? Well, we reused those and bought one more from Home Depot and painted it. They were only 9.5″ deep and we wanted the fabric to billow out a bit more, so we cut some scrap wood to create 17″ slats… 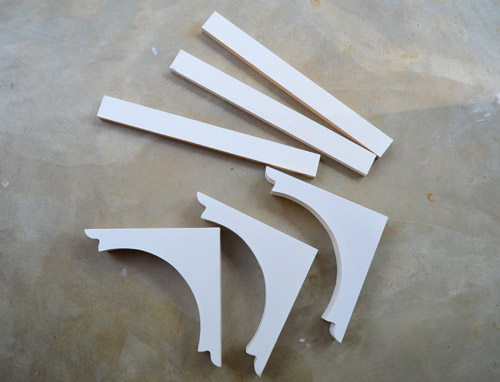 … that we nailed into the top of the brackets to make them all one piece. Then we just hung them on the wall with two screw and anchor sets for each one (the back of the brackets have two holes to slip onto screw heads so they stay firmly in place). 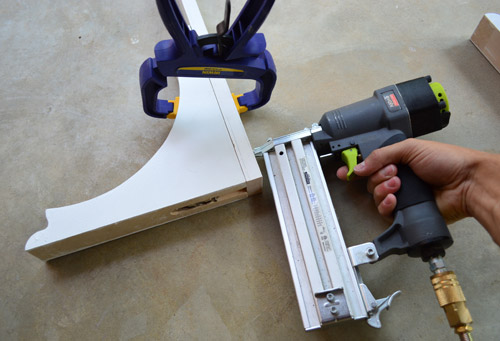 The worry-wart mom in me is glad that Clara can’t possibly jump on the bed high enough to bash her head on the top one, and we thought a bunch about where to place those side brackets so they wouldn’t be in the way. Putting them down too low would mean that we might lean back and get caught in the canopy during story time, so by placing them about 32 inches above the top of the mattress, they keep the canopy out of our way for reading, snuggling and animal-wrestling (don’t ask). And since they’re lined up with the arms of the bed there will never be someone leaning back or jumping in that area like they might towards the inside of the bed. Well, at least we hope not. 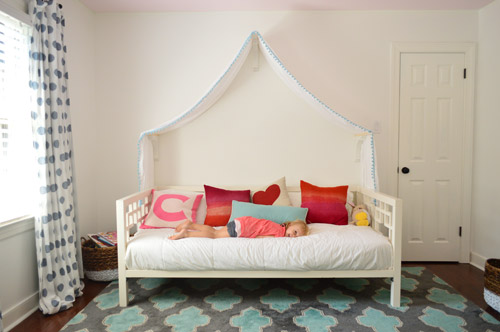 The large flap of fabric is just resting on the brackets for now, but I was planning to use strips of velcro to hold it in place (maybe just along the top and it can just drape over the two side brackets?) but Clara has been so gentle with it – just gazing up at it, softly running her finger delicately over the pom-poms – that I think I’m going to do the lazy mom thing and say “it works for now, and if it gets yanked or drives me nuts I’ll add velcro later.” 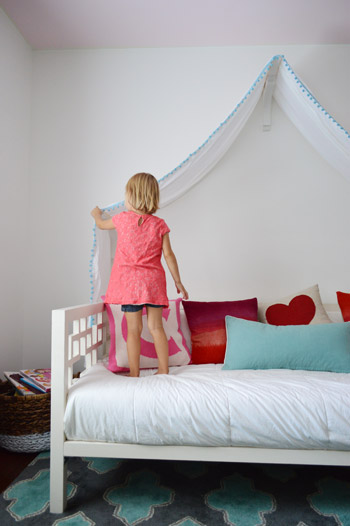 She’s blurry here, but this photo most accurately catches her love of her canopy. This girl is smitten. 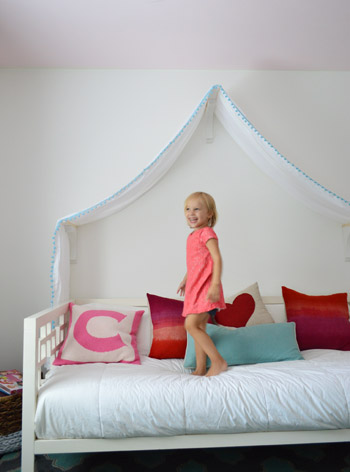 We’re not quite done with that wall. Along with wanting to add some chunky crown molding around the top of the room we also think it would be fun to hang a mirror or some art or a 3D paper mache collection of animals or something to break up the white triangle under the canopy, but the jury is still out on where we’ll land. Just for fun I stuck this Target mirror in there thanks to my good friend Photoshop, but who knows where we’ll end up. I’m thinking something like this could be really fun too. 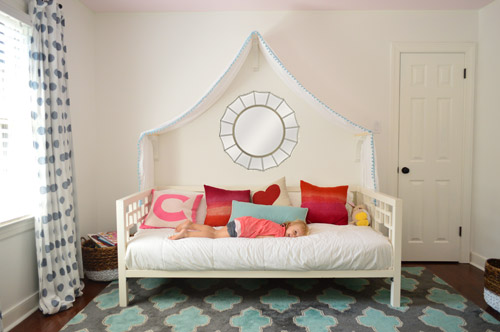 In the meantime I’m loving that our canopy’s made of kid-friendly fabric that’s washable and that it was a not-too-complicated project – but most of all I love that it makes Clara so dang happy. This morning I overheard her telling Burger that he had to wear “a crown and a wand to come into my room because it’s for royal sleepovers.” Don’t think Burger’s quite sold on the idea of wearing anything on his head just yet…