That’s right. You can call me T-Boz. Let’s talk about our new shelf in the laundry room, which is sporting a waterfall edge and some light natural stain. It was a simple DIY project involving some wood and some stain/sealer for a butcher block like effect. 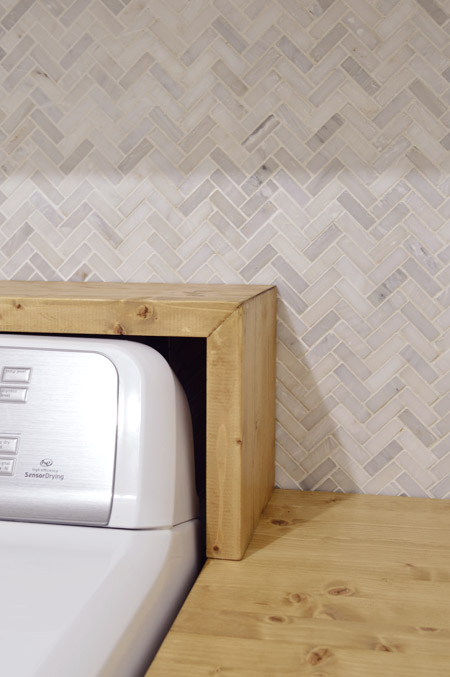 We deviated from our usual mocha stain choice because we were inspired by a few rooms we’ve seen with light cabinets and tile mixed with with natural wood to add some texture and warmth. Here’s a wider shot for you. Ignore the missing filler/crown/toe kick/baseboard/hardware situation. We’re also chasing that stuff (you know, along with the waterfalls). 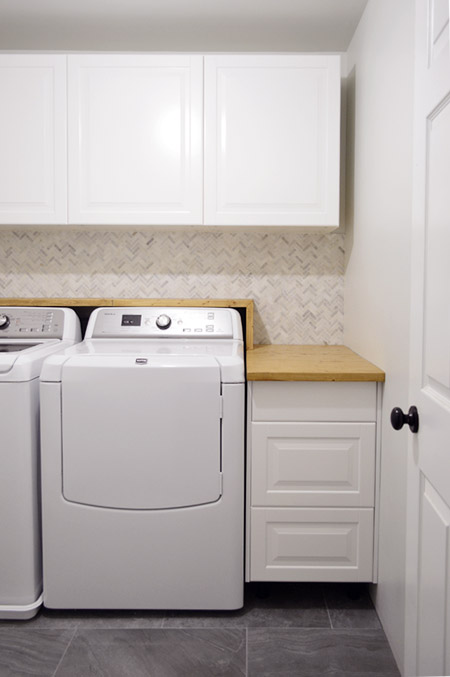 But first we have to talk about installing our appliances since I meant to cover that a while ago. It wasn’t all that big of deal since it was just re-attaching what I had unattached during the demo process. But one challenge was setting the washer pan under the washer and attaching it to our new overflow drain, so I thought I’d talk through how we did it (we couldn’t find many detailed tutorials about that step). The washer pan is the thing that usually sits under a washing machine when it’s on the second floor – that way if it springs a leak, the water hopefully won’t flood your upstairs, rot the floor, and send the washer plunging through the joists onto something valuable below. A nightmare scenario, no doubt, but in my head it always plays out like some Wiley Coyote cartoon. Either way, it’s not something I want to experience.

All of the contractors & plumbers we talked to actually said it was an optional thing to have a pan and an overflow drain (there’s no code dictating it in our area). One even told us that he wasn’t sure it made much of a difference (his opinion was that if your washer’s gushing water, a pan and a drain aren’t going to do much). We heard from others that it can save you a ton of trouble for those slow leaks you might otherwise miss, so we decided to be better safe than sorry, and had the plumbers put one in when they were here moving all of the other hook-ups (it was included in the $375 plumbing fee). Note: a few folks have asked about the outlet situation in the room, so you can see the extra pair we added in this shot too. 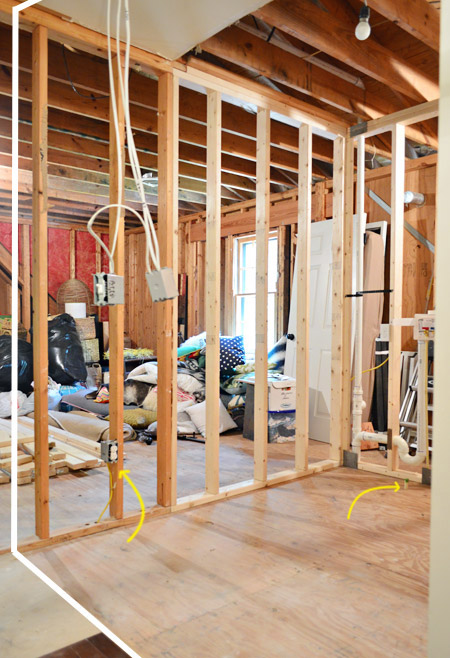 Some of you noticed that we cut around that overflow drain as we laid various levels of flooring (for example, you can see it poking up in this thinset shot from this floor tiling post). The drain was set in a way where we could gently raise or lower the pipe in the garage ceiling below, which came in handy so we weren’t constantly tripping over it. 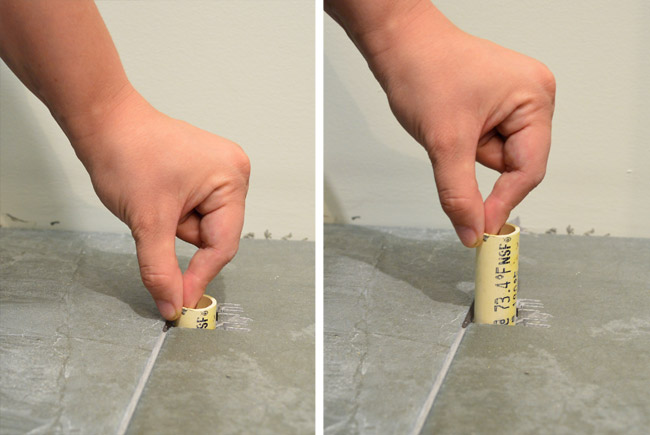 When the plumber left us the washer pan, he shared instructions for attaching it ourselves. But first we had to figure out the exact placement of the appliances so we could precisely set the pan.

The washer would’ve happily sat nearly flush to the back wall, but the dryer’s a different story. During an installation, leaving some excess semi-rigid ducting behind the dryer is recommended so you can easily pull the dryer away from the wall without violently yanking the duct out of the wall every time it comes forward. That ducting takes up some space obviously (it’s pulled out below to show you it a bit more clearly, but even when it’s nested more closely, the dryer sits out about 8″ from that back wall). Note: they sell systems for sinking the ducting into your wall (between your studs) so it doesn’t protrude, but all the systems we found called for a vent that went up to the ceiling and ours goes straight out under the attic stairs (more on that here) so they weren’t compatible. 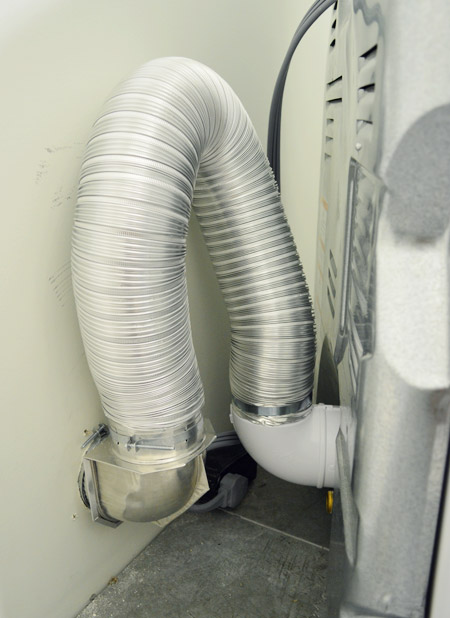 Thankfully that vent-space behind the dryer wasn’t a big deal to us since we expected it and had already planned the shelf. And after finalizing the dryer placement, we could finally determine where the washer should sit so it matched that depth exactly (didn’t want the washer pan sitting too far in or out). We marked the line on the floor with tape so that when we pulled the washer out again, we knew exactly where to place the pan. 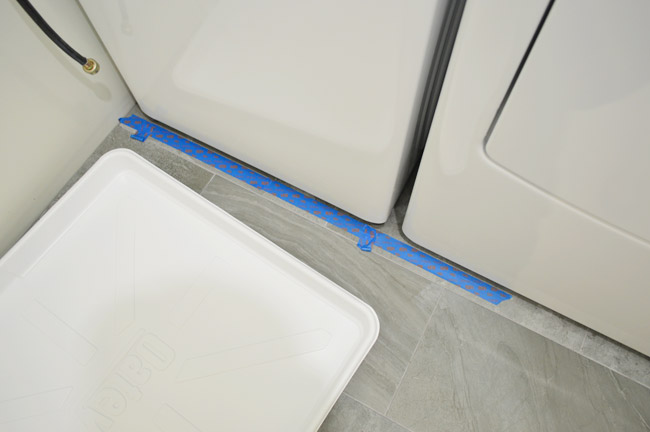 To cut a hole in the pan for the drain, the plumber recommend this suuuuuuper scientific method that involved mustard. Squirt some on the drain pipe, press the pan into it (while using the tape in front as a guide for where to place the pan), and then drill where the mustard left its mark. I marked over our mustard circle with Sharpie, since the “real honey goodness” was a bit overpowering odor-wise (at least when it wasn’t accompanied by a hot dog or something). 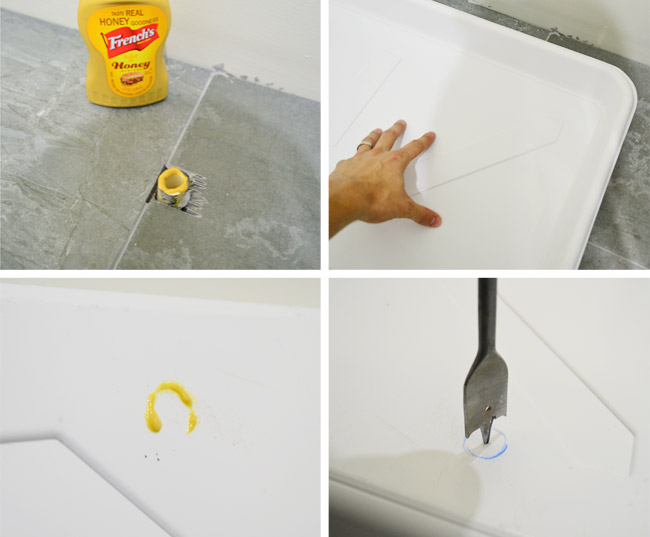 Once the pipe was in the pan, we had been instructed to “silicone caulk the heck out of it.” I didn’t feel totally comfortable relying on caulk as our only adhesive (silicone caulk has some flex to it and we worried the weight of setting the washer down in the pan could flex it loose right off the bat) so I talked it over with another plumbing guy and an employee at Home Depot and they both suggested an expoxy, like this Marine Loctite (marine = crazy waterproof). So I glued the pipe and pan together, let it dry overnight, cut off the excess pipe with my dremel (you need the pipe to be as flush to the pan as possible so the water can drain down it) AND THEN silicone caulked the heck out of it – just to be safe. 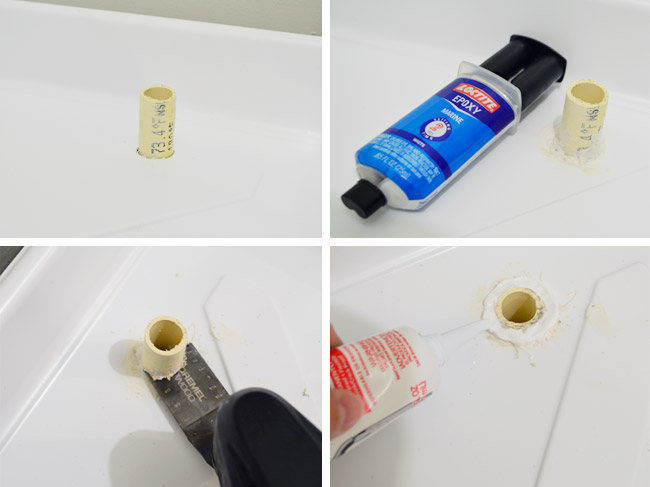 Then it got interesting. I don’t have any pictures of Sherry and I hoisting the washer over the lip of the pan into place, but I’m sure our faces were super attractive. Somewhere in the vicinity of strained and extra veiny. 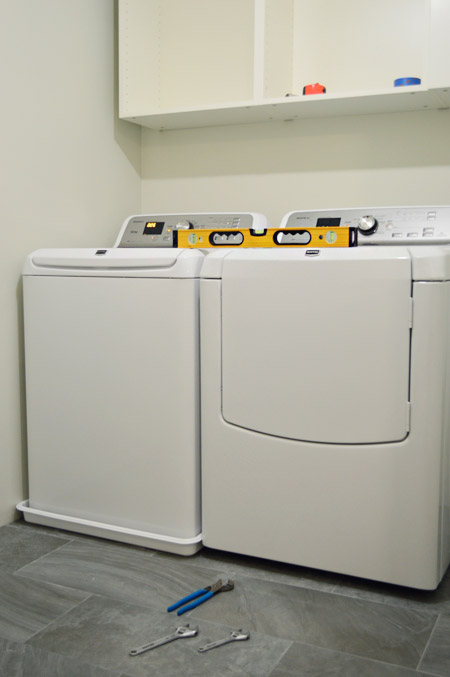 There was also some adjusting of the dryer feet to get it level with the washer  – not only did we want the front of both appliances to line up, we wanted the tops to be the same height as well (hence the level and those wrenches you see one the floor in the picture above). And when it did it was sort of like we hit the jackpot. There was celebrating. We finally had a washer & dryer again.

Speaking of other small adjustments – in our post about the Ikea cabinets a few of you recommended getting the soft-close drawer and door add-ons, so we planned to grab those the next time we were near Ikea. Then, in an exciting hinge-related turn of events, about 12 hours later we happily realized the Ikea lady must have added them to our order, because they were in the bottom of our bag with all the under cabinet lighting stuff. I’d estimate the drawers and doors are now approximately 35 times less slammy. Well worth the upgrade. 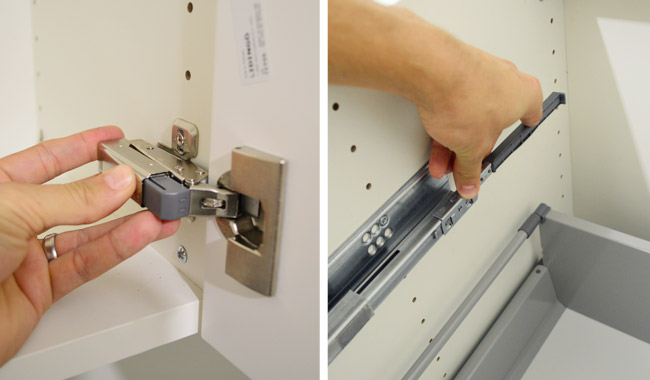 But back to the shelf. You may recall that we built it before tiling so that we knew exactly where our tile needed to go. 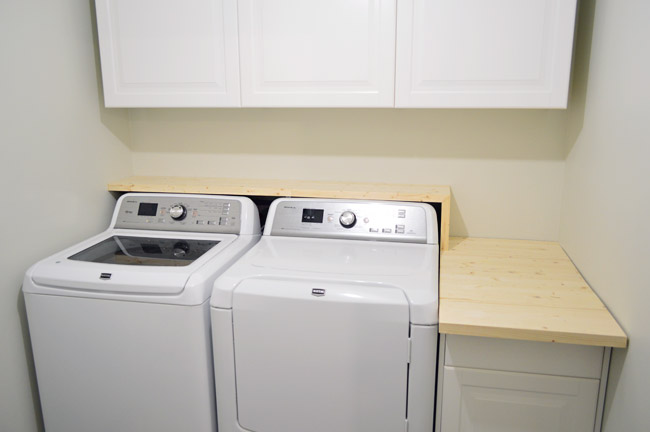 We constructed the shelf and counter out of two of these solid 2 x 4′ panels from Lowe’s. We liked ’em because they were chunky (1.5″ thick) and had that nice butcher-block look to them. 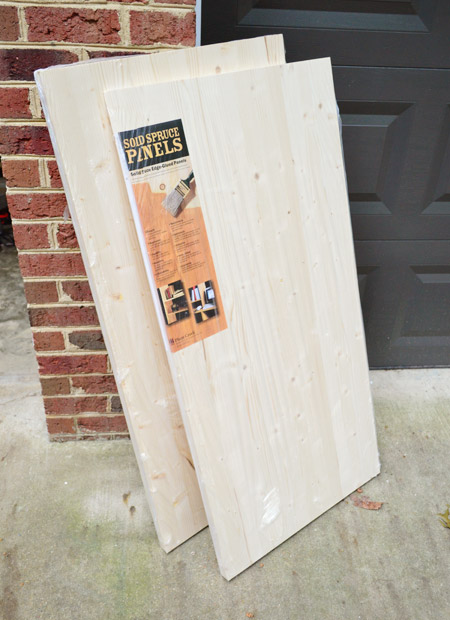 We used one panel for the shelf and one for the counter. For the shelf I cut one panel into two 9″ wide boards and then we Kreg jigged them together into one long shelf. The counter involved cutting the other panel into two 18″ wide pieces and jigging them together. I didn’t cut off the excess counter until after the tile was installed since I wanted to be sure to get the overhang right (so you can see it hanging over too far in this picture). 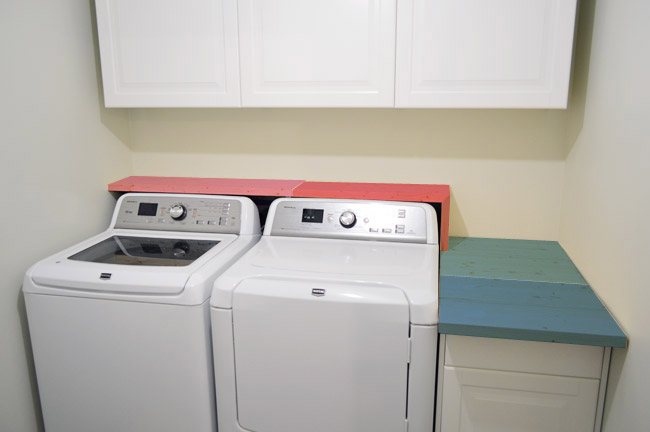 The waterfall edge came from cutting the end of the shelf off at a 45-degree angle and then gluing & nail gunning it together again at a right angle. Since it’s attached to the shelf (which we made removable so we have easy access to the appliance hookups when we need them), I just measured carefully so that it would rest on the counter and line up nicely on the left edge, to make it look like one piece. The top of the shelf doesn’t rest on the appliances, it rests above them on four heavy duty brackets, which you can see better in this post (three of them were screwed into studs to make them extra strong). We didn’t want the washer to shake the shelf and knock things off as it ran. We’ve done three pretty big loads of laundry and so far, so good. 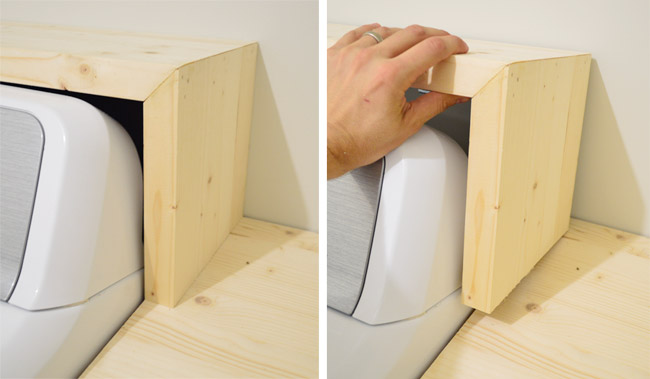 Since we don’t have a go-to lighter stain preference, we tested out a bunch of options on some scrap pieces from the shelf/counter build. Sherry pre-stained/conditioned half of each, then stained the whole block with one of four colors (two by Minwax, two by Rustoleum). Once dried, we pained some varnish on the top half of each – but it made them more yellow than we wanted, so it quickly got nixed. Of course the nuances are easier to see in real life, but we thought Ipswich Pine and Summer Oak looked a little too light and Wheat was a bit too dark/red for us. So Golden Oak was a pretty easy choice. 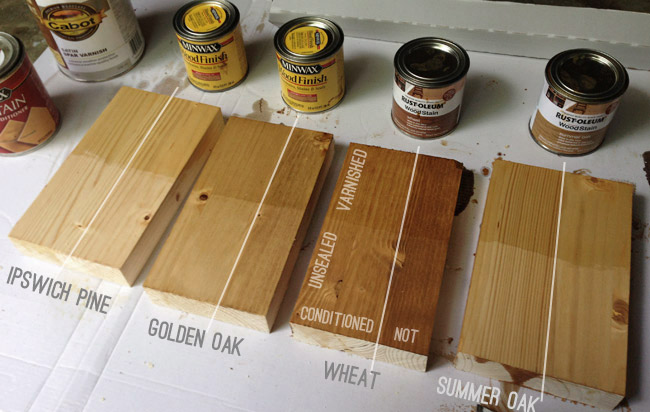 We applied one coat of stain, followed by three coats of Safecoat Acrylaq, which is what we used to seal the wood vanity top in our first house’s bathroom (it held up so well to water in there that we knew it would be great in a laundry room). 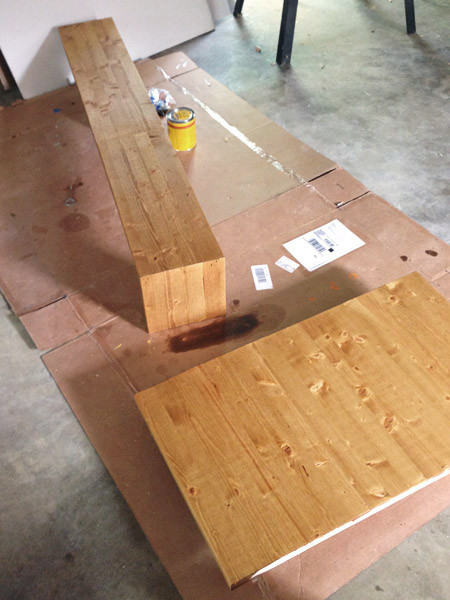 I’m stoked with how it turned out. I think it’s exactly what the room needed, and it’s exciting to start layering things in over the light & bright foundation of the cabinets and the tile. Admittedly our shelf looks a little lonely right now, but we’re just getting started… 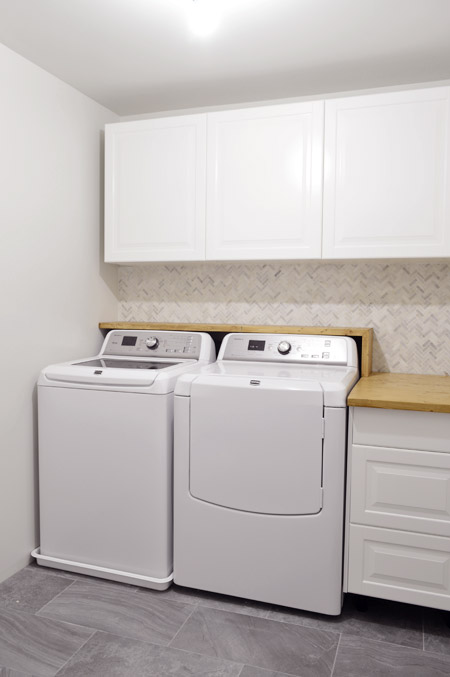 So we still have some loose ends to tie up on this wall (here’s my visual checklist of sorts), but on the bright side – we got the door hung! 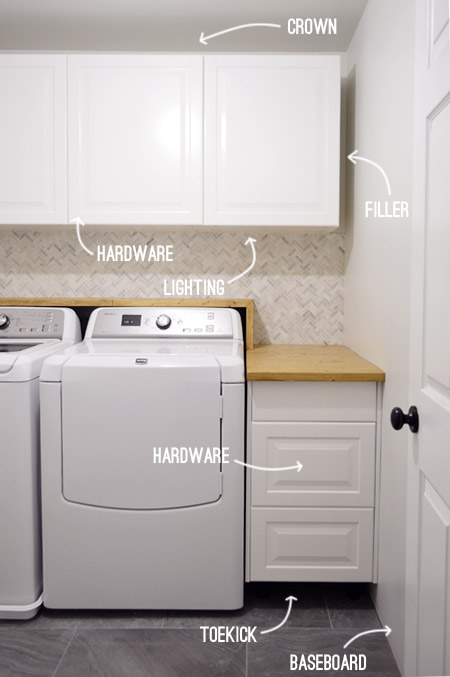 And the fancy glass one that leads to the future bunk-room is in the works, so we’ll hopefully finish that up and have the details for you next week. It bears mentioning that we’ll also be adding things like a laundry sorter, a pull-out drying rack, and a wall-mounted ironing board on some other walls of the room, so those details should be coming soon too.

This feels like a good moment to do a budget update, so here you go:

The two contractor estimates that we got for just the framing, electrical, plumbing, and drywall stuff came in at $3,250 and $5,000, so it’s incredibly comforting that we’re still on the low end of that range after adding a marble backsplash, tiled floors, cabinetry, and a shelf/counter (including some upgrades like soft close doors and under-cabinet lights). That being said, we’re almost exactly double where we were at our last check-in because we hit our big ticket items like tile & cabinets. But hopefully once we’re past the door and trim/crown installation we’ll be at the end of our major expenses. Dare I say this new room of ours (and reconfigured bunk-room entry) might clock in under the $4,000 mark?

That sounds like a jinxy thing to say. Maybe I should play it safer? I’m certain we’ll come under the $100,000 mark (now I really hope I didn’t jinx myself).

Fab Freebie: Wave Fair-well To Summer
That’s My Jamb (aka: How To Hang A Door)