Don’t worry, I don’t know how to pronounce that blog post title either. It’s just a nod to the fact that my  “Aquatober” challenge – where I try to spend the entire month of October drinking water instead of soda and other sugary drinks – has extended itself all the way through April. Hence, Aquatoberpril. 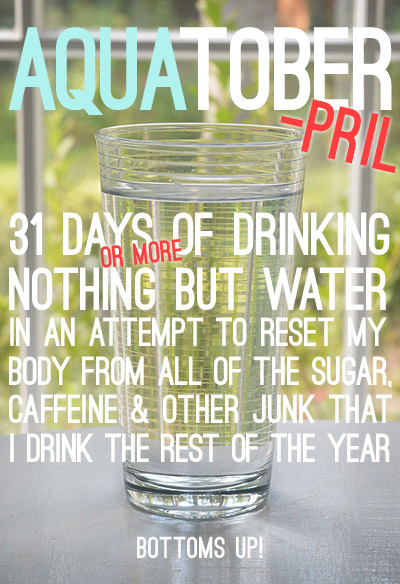 In my original post about Aquatober I noted that I have varying success every year I try to detox myself (and my wallet) on all of the soda I consume (it’s my liquid vice of choice). Some years I don’t make it the full month. Some years I make it a bit further. Well, this time I’m still going strong some six months later – minus a milkshake I made myself the other day.

I don’t say this because I want a bunch of virtual pats on the back or expect someone to round the corner with a trophy. I mention it because it taught me something new this year. It was the first time I ever mentioned it to anyone beyond my immediate friends or family. And suddenly I felt much more compelled to stick to it. Something about declaring it to the blogosphere made me more committed than ever to not slip up and apparently to not give up – even once November rolled around. It wasn’t like I expected a public shaming if I opted for a Coke one night (heck, it’s not like you’d know) but the enthusiasm you guys showed for it in your comments was apparently a strong motivator to me. 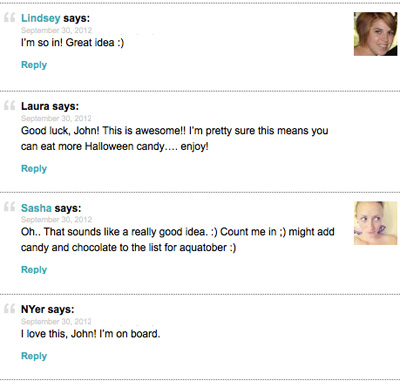 It’s funny because there haven’t been lots of visible rewards for being soda free for six months. Sure, there are probably some extra dollars in my bank account from weeks of just ordering water at restaurants. My dentist might like me a smidge better. But overall I haven’t noticed my energy being way up, my skin being more lustrous or whatever and I certainly haven’t dropped weight (although the book tour might be to blame thanks to all the cupcakes). I think the main satisfaction I’ve gotten is the confidence that I can muster up some willpower when I need to. I can stick to something and I can create a new habit. So I wanted to thank you for your role in that, whether you realized you were helping or not.

Oh, and I’m totally not making any promises about giving up soda for good from here on out. We’re about to enter those hot and humid summer months where all my body wants is something cold and distinctly not water tasting. Anyways, what’s keeping you guys motivated these days? Or, if you’ve ever given up soda, did you notice any big differences from the experience?