First there was a fortunate event. We found a giant piece of art in a pretty wood frame selling for $20 at a yard sale in our neighborhood. And when I say giant, I mean giant. It’s over 3 feet wide and 2 feet tall. The only issue with it was there was a small dent in the frame, which is totally not a big deal for us, so we went for it. 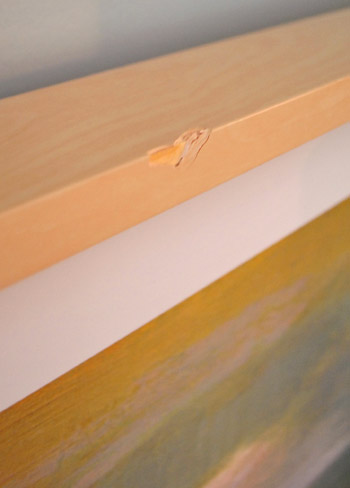 John wasn’t really a huge fan of the painting itself, but we figured you couldn’t even get a canvas this big and build a wood frame around it for $20, so it was a good deal if only for the “base” that it gave us (we could always paint over the artwork or place a large print over it, etc). And in the meantime, while we figured out what we wanted to frame/paint on top, I thought I would just lean it up on the back of the buffet to see how the scale looked since we were thinking about hanging it there. But before I could say crapIshouldbemorecareful I had somehow managed to knock the glass based lamp off the left side of the buffet while leaning the hulking new piece of art there. 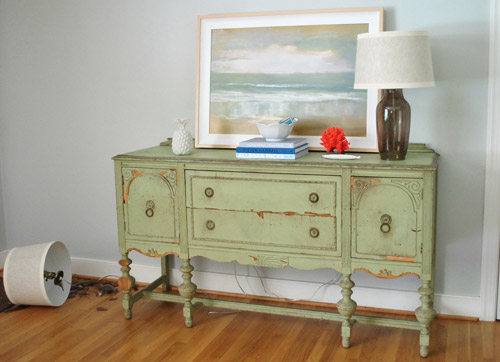 Thank goodness Clara was sitting in her yellow highchair at the dining table eating (no worries about her bare feet and the glass) but we were having a random power outage (it only lasted about an hour) so that meant I had to sweep and sweep and sweep until I was sure all the glass was gone since I couldn’t vacuum that corner just to be sure until the power came back on. So that’s two unfortunate events going on (broken lamp + power outage). Not the end of the world, but… #Bummers. 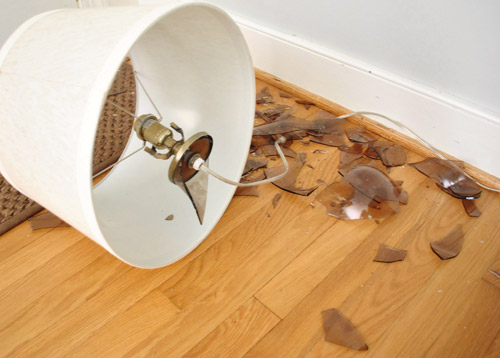 Bet you didn’t see this coming… 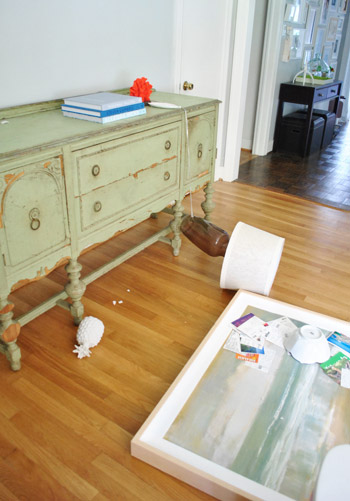 Seriously, I couldn’t make this stuff up. The picture that had been leaning just fine against the wall for about thirty minutes while I cleaned up the broken lamp suddenly shifted, sending the other lamp flying over the edge along with the art itself, our bowl of postcards, and my little resin pineapple.

But somewhat miraculously, the cord for the lamp was juuuust short enough to keep it from shattering everywhere. #Luckylittlelamp 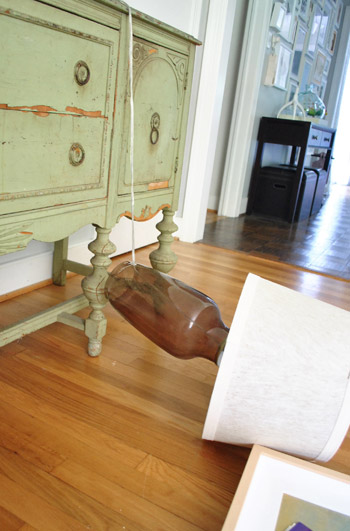 As you can see from the picture above the last one, a few small pineapple points broke off in the fall, but thankfully it’s not noticeable. And the art (which doesn’t have a glass pane, just a wood frame around the perimeter) and the ceramic bowl full of postcards weren’t harmed in the fall. Whew. #CanThingsPleaseStopJumpingOffThisBuffet?

Around this time John came home from an errand he was running so I got to tell him about all the chaos he had missed. Thankfully the power was back on at this point so I vacuumed the corner while John used a heavy duty anchor to hang our jumpy little painting once and for all. Seemed like the only surefire way to get him under control (the painting, not John). 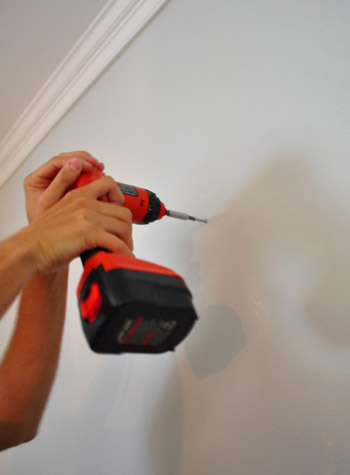 Then I let out more than a few sighs of relief. It’s not necessarily art we would have picked out in a store for $300, but for $20 from a yard sale it definitely works for now. And we’d love to use it as a backdrop for a print that’s more our speed someday – or even paint over it to see if we can whip up something more “us” eventually. Until then, I’m just happy he’s staying. on. the. friggin. wall. 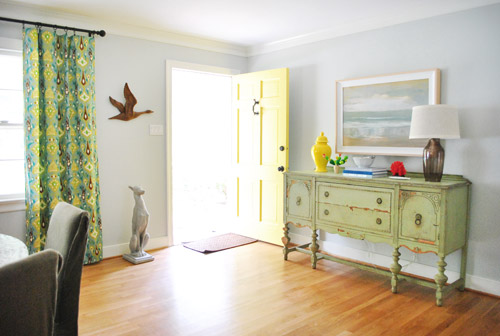 So perhaps I jinxed that poor glass lamp when I mentioned that we had him for over five years in this post (they were actually from our wedding registry) but somebody was looking out for his twin brother. 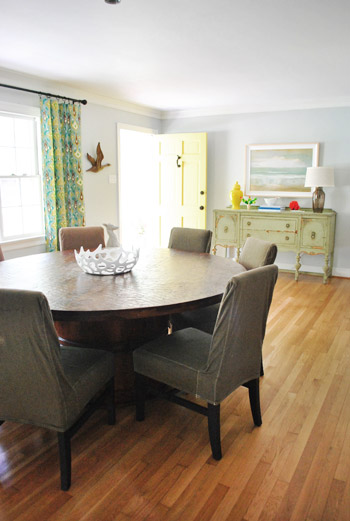 Thankfully all of the items on the buffet are just there on a “for now” basis, since we’re just working with things we already have. But someday I’d love to upgrade to two matching lamps that feel a little more special (maybe with sculptural bases like the artichoke ones in the bedroom, or a fun bold colored shade). You know we’ll keep you posted! 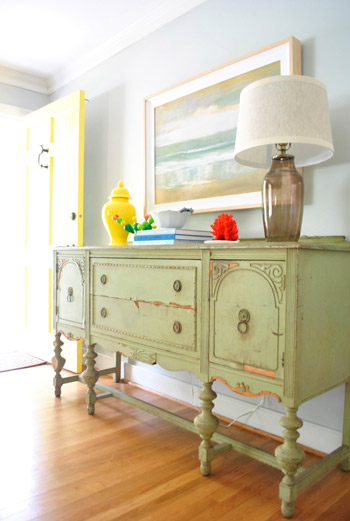 I still kind of can’t believe that the frame somehow jumped over the faux coral and the ceramic leaf dish and only managed to topple the bowl and the lamp (neither of which broke). Maybe there were some fortunate events worked in there with the unfortunate ones. 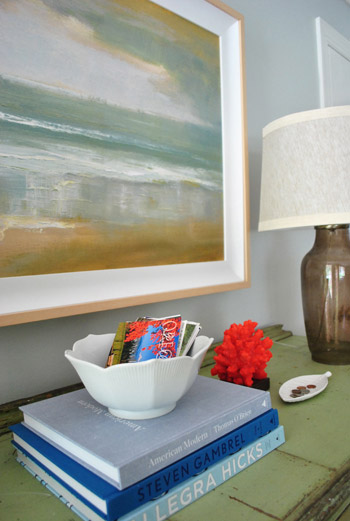 And for anyone wondering where Clara was while I shot the after pics, I’ll give you a hint: 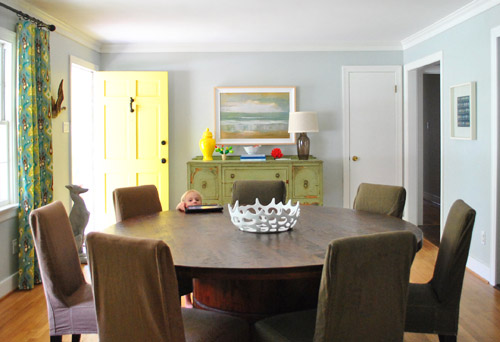 Yup, the girl likes to run through my shots. Sometimes while holding “her” iPad. Kids!

Any fortunate or unfortunate events going on at your house? Did you see the third unfortunate event coming after I shared those first two? I didn’t. That’s for sure. Scared the bejeesus out of me. Although I gotta admit Clara was some good comic relief. She totally shouted “oh no, it fall down!” from her high chair. And then she went on to mutter something about “the picture fell down and hurt the head.” Pretty cute…

Registry Dos & D’ohs: What We Registered For (And Skipped)
Mood Board: Outdoor Deck Furniture & Accessories