Here’s the story of how I made a cute little quilt for our baby boy on the way. 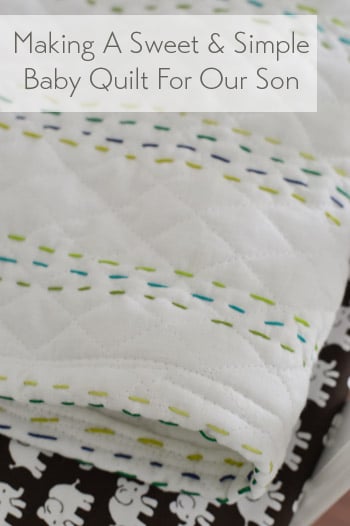 A few years ago I chronicled how my not-nearly-a-seamstress buns were possessed to make a quilt for the bean. 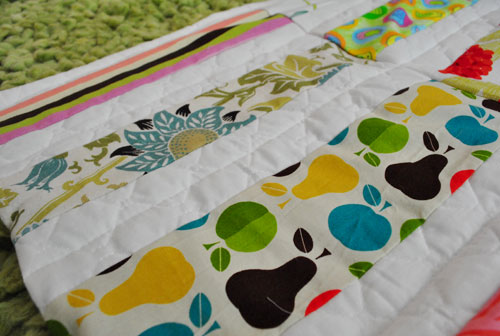 And here I am a few years later (after a tornado of thread and a surprisingly successful sewing machine date) with another homemade quilt – this time for our little man. 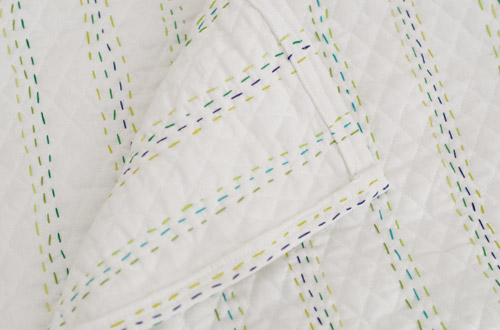 I don’t think I would have been so into making him a quilt if Clara hadn’t grown so attached to hers. She not only has slept with it pretty much every night since I finished it… 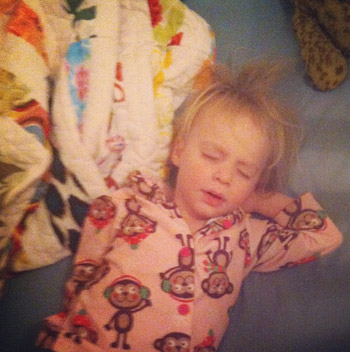 … but she brings it in the car for road trips, and even drags it downstairs to to the sofa for lazy Saturday snuggling.

The sweetest thing about it is that John has told her a few times that mommy sewed it just for her, so every once in a while when she hugs me or kisses me goodnight she leans in and whispers “thank you for my beautiful quilt.” Yup, just typing that made me tear up. She’s the best.

So I wanted to make something for my little man to hopefully love just as much, but I thought it might be fun to try a different method this time. I hedged for a while, not really sure where to begin, and then I saw this awesome hand-stitched quilt and knew it was just the inspiration I was looking for (it’s by Citta Design, but sadly no longer for sale).

I love how charming that sweetly imperfect hand-done stitching is. Each line is irregular enough to clearly not be machine-made, and it feels so full of love thanks to those slightly varied dashes. So I decided to give it a try… 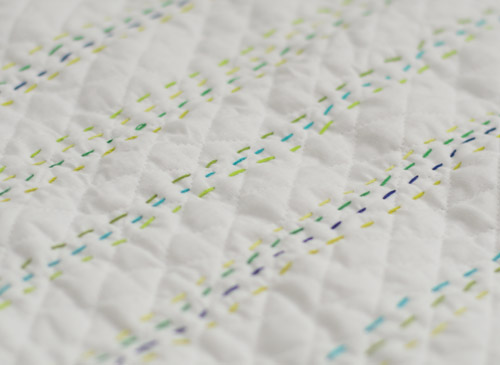 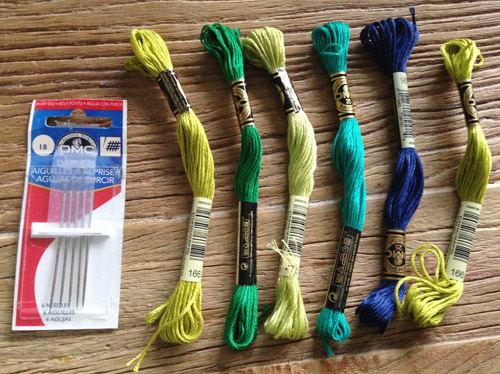 All told, I spent under $10 to make this quilt (and about ten million love-filled man-hours spaced across a weeks’ worth of evenings, but we’ll get to that in a second). While I was pre-washing my quilt fabric (I thought it was best to let it shrink up before I embroidered it), my first step was just to decide what type of stitched pattern I liked best. I debated everything from evenly spaced lines like the ones in the inspiration image to some sort of diagonal or crosshatched design, but in the end, the idea of some simple stripes in varying tones of blue and green won out. 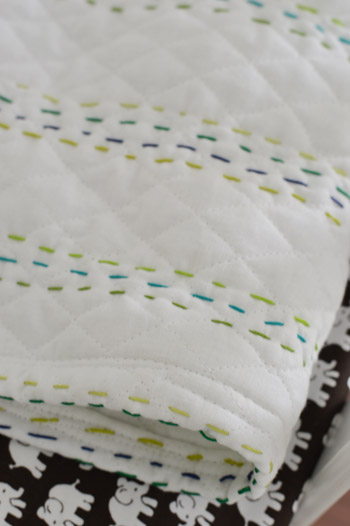 I just started from the left side of the quilt and hand stitched four different lines of embroidery floss – each one in a different color. 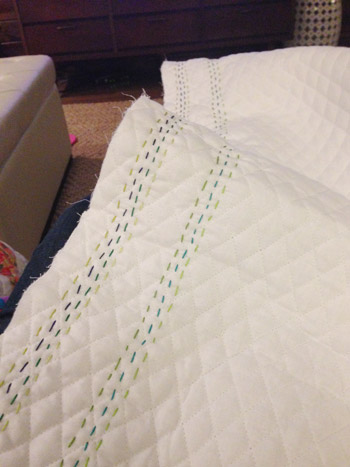 I made sure not to double up my thread (I kept it single like the inspiration quilt, which meant threading the needle like this with a little excess, but not looping it all the way down and knotting it like I do when I sew a button with regular thread). 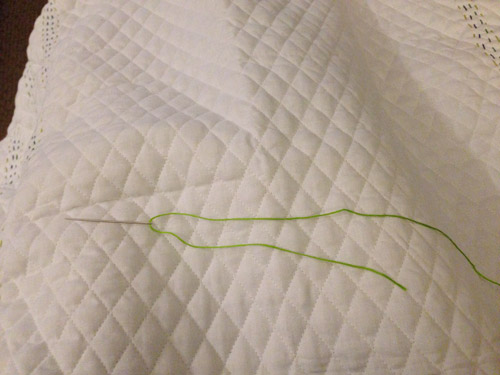 After completing my first “stripe” (which was comprised of four different stitched lines that went from top to bottom) I used the diamonds on the quilted fabric to roughly space the next stripe about two diamonds away. That way I could keep the spacing somewhat even, although I did some of the stripes 4-stitched-lines wide and some of them 3-wide, just for variety. I really do love how the inspiration quilt is unmistakably done by hand – and it doesn’t hurt that I couldn’t make something look perfectly spaced if I tried.

The diamonds in the embroidery fabric also helped me keep my lines somewhat straight from top to bottom. For example, if I started one hand-stitched line at the peak of a diamond, as I stitched from the bottom of my fabric to the top, I made sure to connect each diamond peak as I went. This kept me from veering off too far to the right or left. 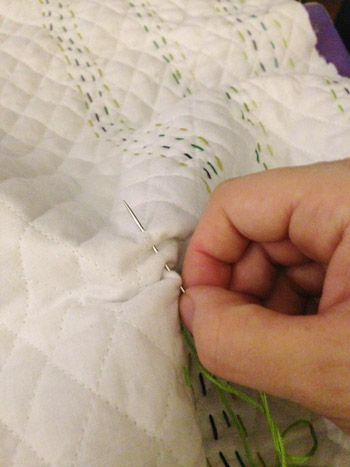 Now let’s talk about the time factor. You know I like to keep it real with you guys, and I’d never say “fast and easy” if something takes forever. Well, the good news is that this quilt is mad cute. The bad news is that it takes forever. I don’t know if I’m slow or just easily distracted by Housewives drama (I did it every night across about a week while sitting on the sofa watching TV), but my average was about 3-4 stripes (made up of either three or four colors) a night, which took about 2 hours.

So all told, this 16-stripe one-yard quilt (well technically there are 57 stripes, but they’re spaced to look like 16 thicker ones) took me around 11 hours in total (including one more hour spent hemming the outside seams with a sewing machine, which actually wasn’t too bad). 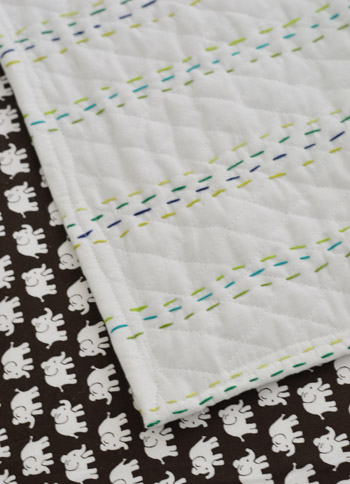 Even though it took a while, it wasn’t one of those torturous projects that makes you want to poke your own eyeballs out (that’s painting blue trim or peeling wallpaper, FYI). It’s more like one of those relaxing repetitive motions you can do at night from the sofa, where your butt might be parked anyway. But instead of taking quizzes on Buzzfeed or scrolling around on Instagram, you get to be stitching something while snuggled under a blanket with your chihuahua and feeling pretty dang quaint about it. 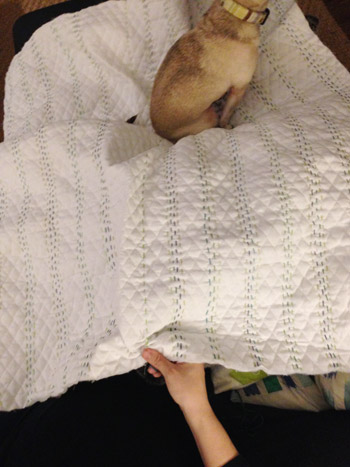 As for how I knotted each stripe, I just tied off the top of each one with the thread still on the needle on the top edge of the back of the quilt. And then on the bottom edge I cut the embroidery floss off with about 7″ to spare so I could slip my needle back onto that end and knot it there as well. That left me with a seam full of knots like this along each edge (top and bottom) on the backside of the quilt. 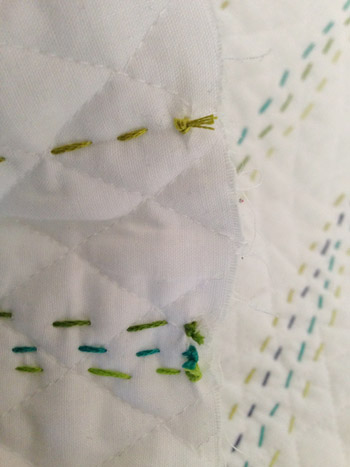 Once I got about a third of the way done with my stripes (working from left to right), I started on the right side and worked from right to left to get about a third of the way done with that side. Then I bounced back and forth doing every other stripe on each side, as I got closer and closer to the middle of the quilt, which allowed me to space everything so it was somewhat symmetrical. It probably would have been just as easy to work from left to right and use that two-diamond spacing, but I might have had to trim off a few inches of the quilt at the end if everything didn’t line up perfectly, and I liked the idea of a square quilt.

Allow me to share this creepy low-lit iPhone pic to demonstrate how I sort of worked in towards the middle. 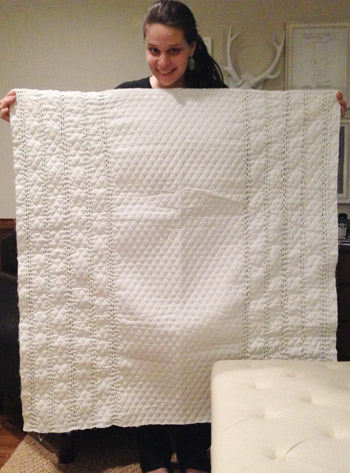 To hem the edges I broke out the ol’ sewing machine and said a few prayers to the sewing machine gods. I’m paraphrasing, but they were something like “please let me make it through this attempt without throwing this thing out the window or revealing my evil sailor-mouthed alter ego to my sweet husband in the next room.” Then I just folded each edge over in the back, took three deep cleansing breaths, and stitched them in that folded position. 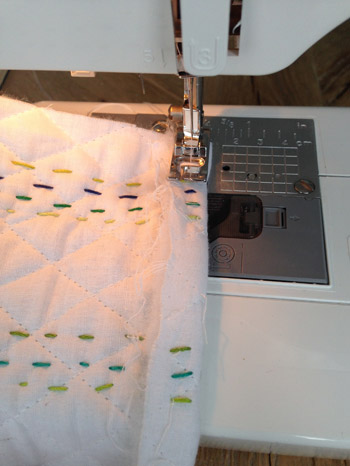 This hid the knots on the top and bottom but there was still not a finished edge along the back hem, so I folded each of them over again and did one more stitch-session with each side for a nice finished look from the back and front. This is the front: 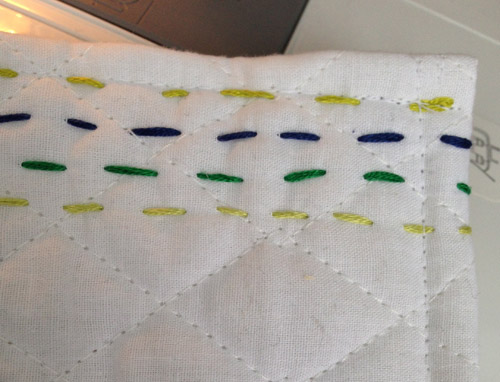 And here’s what it looks like from the back:

Lo and behold, I only broke two needles (that’s not a joke, I really managed to break two needles) but I think it came out really sweet. 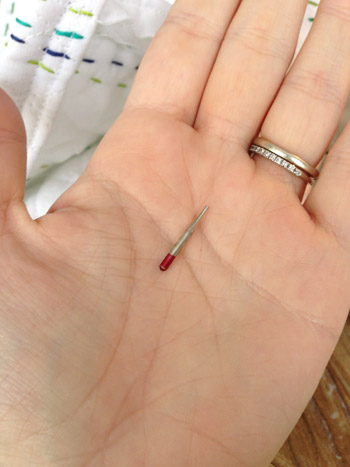 Can’t wait to meet this little bun and wrap him up with all sorts of love and quilt-y snuggles.

Right now it’s just chilling in the nursery, waiting for the big arrival. 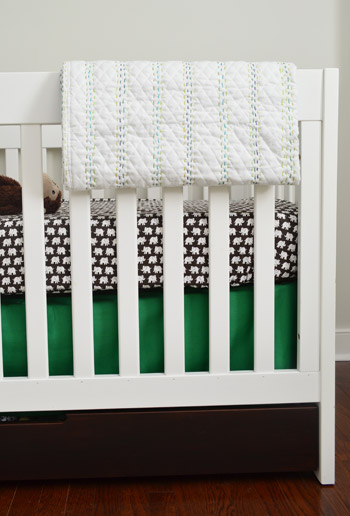 Is anyone else sewing anything for their kiddos? Friends or relatives? Four-legged babies? Have you ever tried hand-stitching or embroidery? It’s oddly restful. Sort of like hand hypnosis.