Yup, we’re following the blogger trend that seems to be sweeping the internets: our kiddos officially have a playhouse. It was actually a gift from my mom for their joint birthdays back in the spring (yes, our 7-year-old and 3-year-old both agreed on precisely one thing, and it was that they wanted a little outdoor house to call their own). “No grown-ups allowed” was actually uttered during the request. So we looked around for one we thought they’d both like that wouldn’t break Nonna’s budget. We came across this cute playhouse that was made of solid cedar, was the right price, and even had little flower pot holders out front. 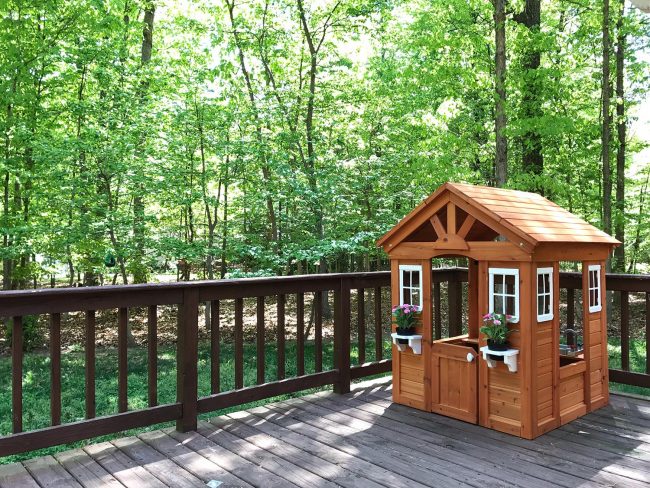 So we sent my mom the link, enjoyed a plethora of excited emojis that she sent back in return, and along with the text that said: “it’s going to be delivered in seven days, and it says you have to assemble it. Hope it’s not too complicated!” 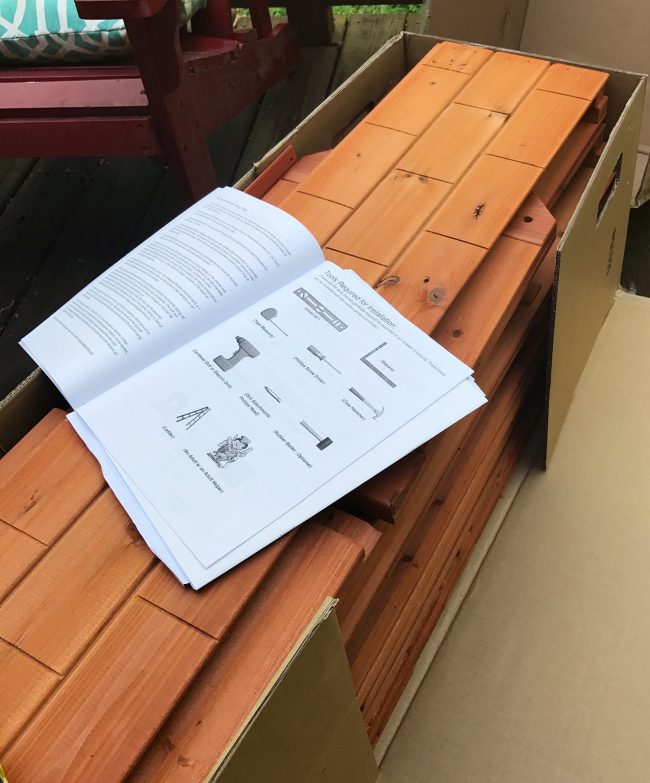 Turns out it was pretty straightforward, but it did require a couple hours to put together. Maybe it would’ve gone faster had we had this super-handy looking “Adult Helper” pictured in the instructions. That guy looks like he’s ready to kick butt and take names. Although his swollen thumb concerns me. And why is he showing up with a saw? 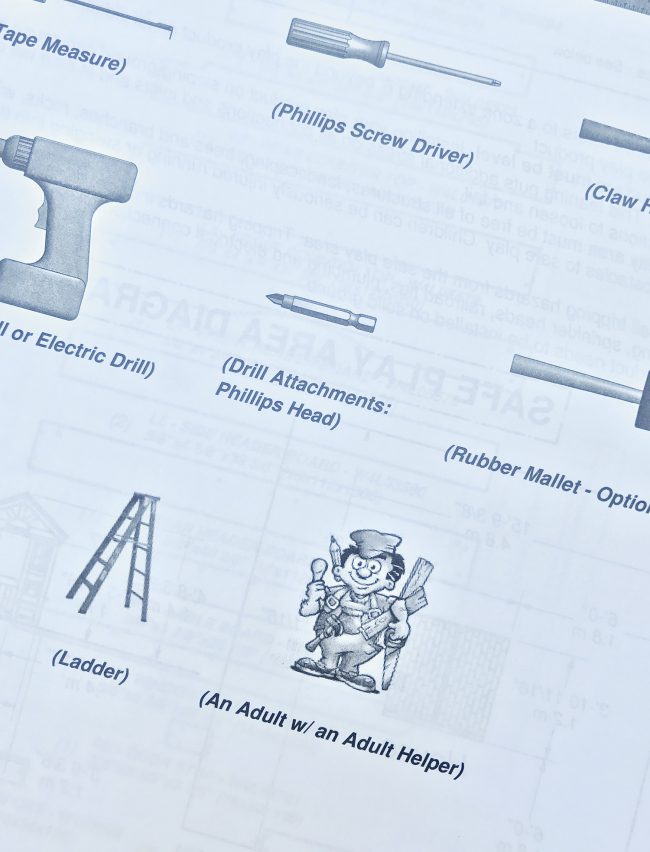 Every piece was pre-cut, pre-drilled, and labeled so it wasn’t much different than putting together a piece of Ikea furniture. I’d just recommend laying all of the pieces out so you can see their labels and grab things more quickly than keeping half of the materials in the box and digging around for hours looking for L2. 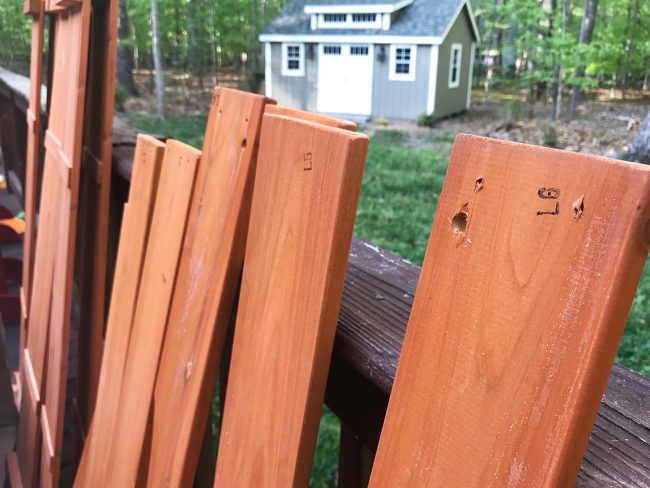 Once it comes together, it all feels super solid. You can see how the roof slats are not only firmly attached, but they interlock. And there’s a full kitchen inside (which I didn’t even notice when we picked it) complete with burners with knobs and a sink for…. washing squirrels? I don’t know what goes on in there. Remember: no grown-ups allowed. 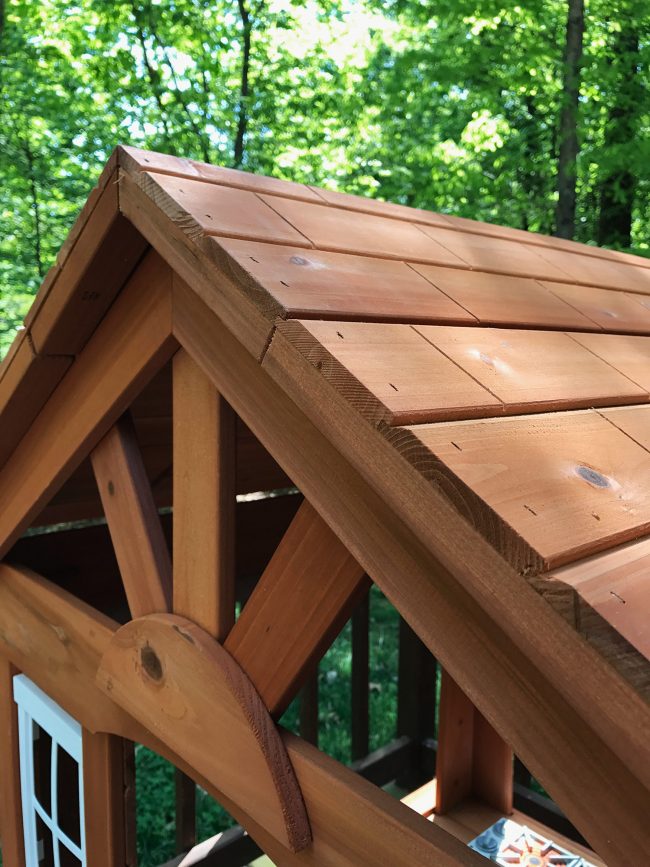 At first, we had it up on the deck (this was still back in April, hence those little “pollen worms” you can see on the deck), but the kids pretty quickly requested that we relocate it down in the grass so they could be further away. Refer back to: no grown-ups allowed.

So here it is out in the yard. So tiny and cute! 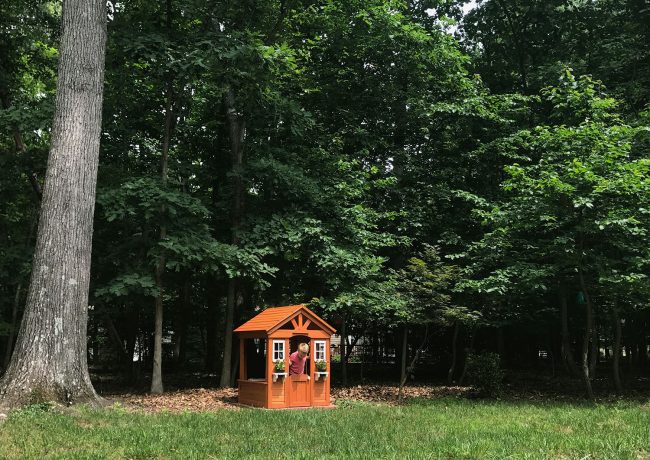 We grabbed a few $1 pavers at Home Depot to put under it so it wouldn’t sit on the ground and rot or something. Plus the kids like that there’s a floor in there that they can sit on (that’s our daughter in there sitting down and… washing squirrels?!?!). 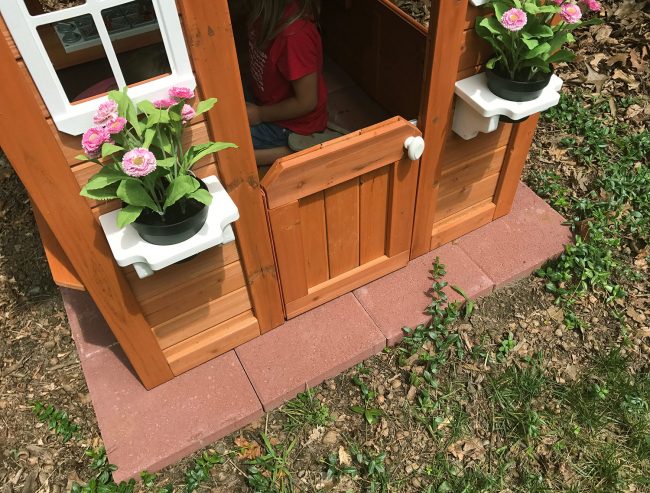 It doesn’t come with the flower pots (just the holders) so I just used faux flowers in a black pot that I already had from Ikea. It could be fun to plant seeds with the kids and watch them grow out there too. Although the deer would probably eat anything we’d plant in there… maybe lavender would work?

Before it arrived, I wasn’t really sure how much they’d use it together (would they even both fit?!), but they end up in there together a lot. And sometimes they play a game that involves holding hands and pretending that the kitchen dials and spigots are controls and they’re “driving through space.” 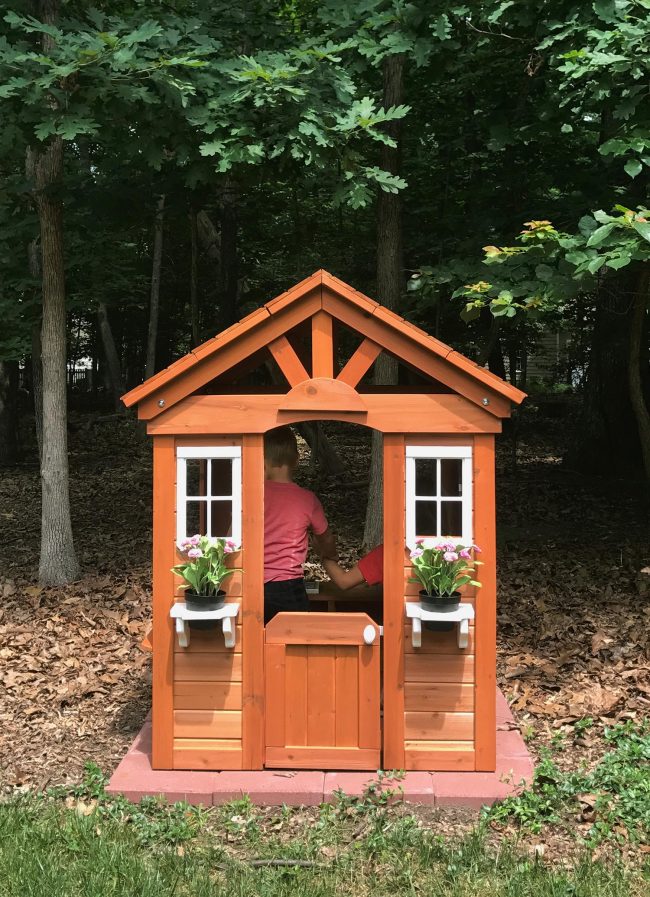 Also, this is a weird sidenote, but it has an actual doorknob that latches which is a surprisingly big hit. They always make sure it’s firmly closed when they leave. It’s sweet to see how nicely kids treat something when they feel like it’s “all theirs.” 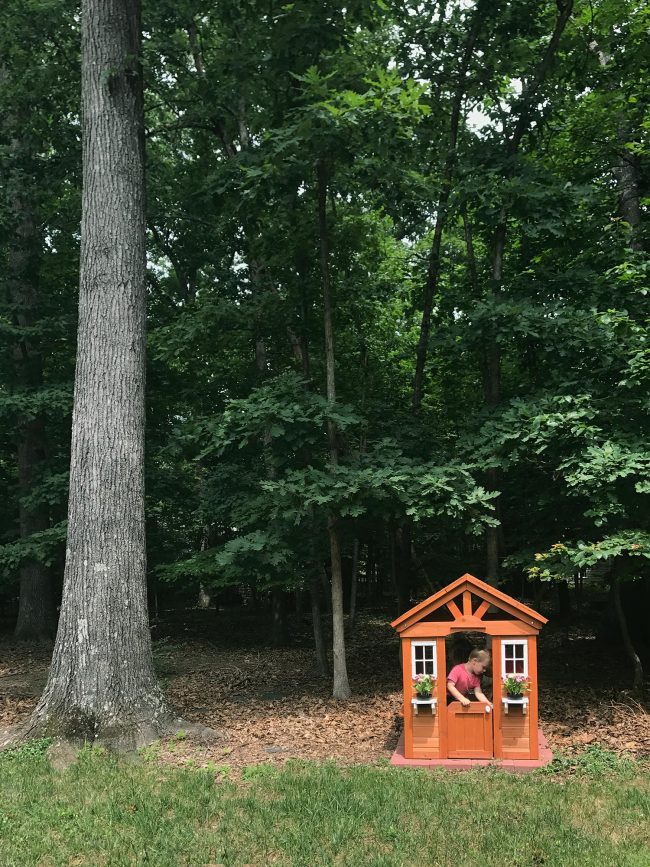 It’s not nearly as decorated as some of the playhouses out there these days (I’ve seen doormats and flags and bridges and window treatments – and they can look amazing when people paint them like this, including this adorable makeover to this exact same playhouse) but the natural cedar goes with our brick house pretty well, and John “Practical” Petersik pointed out that a painted house out in the woods could look pretty dingy, pretty fast. The good news is that even if you buy a playhouse and assemble it… the kids will love it. And it actually looks really sweet out there just the way it is. Like a tiny log cabin, where the kids go to escape adults and occasionally to “drive through space.”

Psst – Here are a bunch of other kid-related updates and projects, including things that we built from scratch (like this dollhouse) or “hacked” (like this cabinet-turned-play kitchen).

#56 Transcript: The Big Mistake We Made Selling Our House By Owner
#57: The Home Design Choices That Drive Us Crazy