We’ve mentioned having a backsplash + open shelving + range hood idea a few times without much elaboration, so here’s the full monty explanation: we basically want to create a counter to ceiling accent wall of backsplash tile with open shelves and a range hood going on. This Sarah Richardson kitchen is especially appealing to us when it comes to the tile choice (we love white subway tile, but we’re thinking we might do something a little less white since our cabinets will be going white and we don’t want to completely whitewash the whole room). 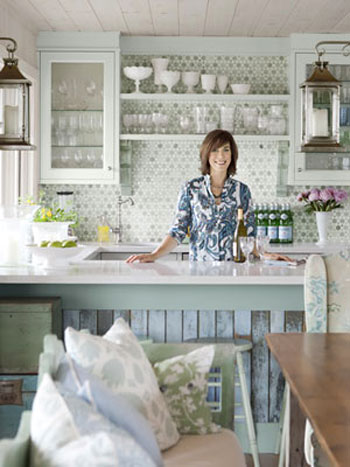 Now I will read your mind in a move I like to call “David Blaine-ing” you. You are thinking the following things:

Allow me to address those questions below:

We’re not going to have open shelving everywhere and zero cabinetry with doors. We’ll have plenty of base cabinets and some closed uppers to stash not-so-pretty stuff out of sight. As for the one eight foot wall that we’re excited to smack with a range hood, some open-shelving, and counter to ceiling tile, we did a little “research” before committing. We know two different couples who both have one wall of open shelves above their stove with a range hood… and they both love it. When we asked them if they got greasy or covered with steam they both looked at us weirdly and said “we have a range hood.” Apparently up-to-date range hoods have better suction than over-the-stove microwaves (which we should know since we had one in the last house but never actually stopped to think about it). So if you use them when you cook they should suck up the steam and grease and all that stuff without any issues of it somehow migrating up and to the left or right around the hood and mysteriously landing on the cabinets.

We also asked about dust. Again they had similarly no-biggie answers. One couple said they use their shelves to store items they use so frequently that they don’t have time to sit around getting dusty (ex: plates are used and washed and then stashed back up there and used again in rapid succession – so they don’t sit for weeks on end without getting touched thereby becoming furry). The other couple said they just like the look more than they hate dusting, so they don’t mind wiping things down with a duster every few weeks for the trade off of a light open look and easy-access to items that aren’t tucked away behind closed doors.

Then we headed over to Layla’s blog since she has open cabinets and read what she had to say about them. Here’s a big post all about it, but this quote at the end pretty much summed up her take: “Think you can’t have open cabinets because it’s too dusty where you live? It’s dusty in Alabama too! (cough, cough) We use the dishes in our open cabinets every day though, so they usually don’t have time to grow sweaters. If something does happen to collect a little dust, we just give it a quick rinse before we use it.” 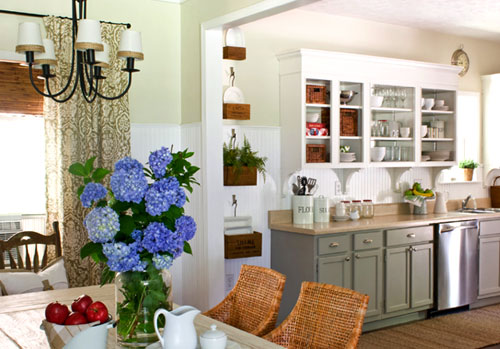 And because we’re complete weirdos who don’t know when to stop, we also heard from readers who have open shelving in their kitchens and this is what they had to say:

All of a sudden this post is sounding like an infomercial, huh? Before you know it I’ll be trying to show you just how much water my Super Shammy can hold (picture my head on that dude’s body trying to sell you an amazing liquid holding cloth).

But really the point of sharing our “research” on the subject of open shelving isn’t to convert anyone (we just babble about the choices that we make along the way, DIY-diary-style). So if it’s not your thing, it’s not your thing. I’m sure there are folks out there who hate their open shelving, we just happened to hear from a ton of people who had nothing but great things to say. In the end, when it came down to figuring out what we wanted to do with our kitchen, we just had to… do what we wanted! Haha. So some open shelving and some closed upper cabinets fit the bill. But we hereby solemnly vow to keep it real with you guys. If after a month of use (or a day or a year) we start to hate the choice of open shelving (or anything else for that matter) of course we’ll tell you! And we’ll share whatever we decide to do to change things. Oh and when we make any final decisions about the backsplash tile and the range hood we’ll definitely spill those beans.

Pssssst- This morning I’m over on BabyCenter keeping you posted (as promised) when it comes to how our house is changing thanks to Clara. Let’s just say we’re adding storage galore for all those toys and blocks and books and balls…