A post on Facebook the other night led me to this random quiz: What American Accent Do You Have? Since we’ve always been fans of completely non-scientific online quizzes, why not take it for a spin, right? It was especially interesting for us to take since we get the occasional video comments like “John sounds soooo Southern” or “Sherry talks like Mila Kunis.” Not that Mila Kunis is an accent…

We both think we have pretty neutral American accents – although I’m quick to point out that the Jersey in Sherry likes to call the top of your face the “far-head.” And she gives me a hard time for not distinguishing between the pronunciation of “pin” and “pen.” So maybe this quiz would settle once and for all exactly how middle of the road our accents are (or aren’t). 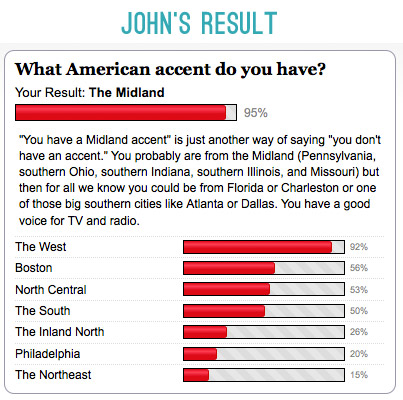 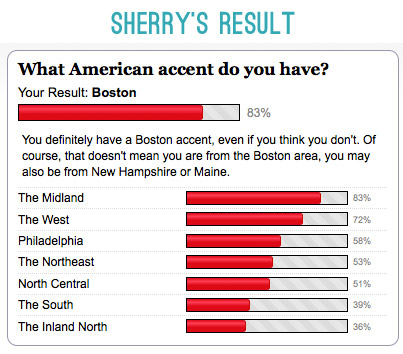 “YOU DEFINITELY HAVE A BOSTON ACCENT”??!?

We both cry laughed. Sherry has been pinned as New Jersey, New York, and even as South Carolina or Canada, but never Boston. But before I got to drop too many “paaaahk the cah in the Harvaahd yaaahd” jokes on her, we both noticed that she actually got an equal 83% ranking for both a Boston and Midland accent. So maybe she is still pretty neutral after all… just in a Boston-y kind of way. What do you Boston folks who met us at the signing think? Is there a little Boston secretly hiding in Sherry? Or is this quiz just way off?

Here’s the link again if you want to take it yourself. If you already did, what was your result? Was it spot on or not even close? Was there any question that you had a particularly hard time answering? I think Sherry repeated Mary, marry, and merry about 20 times before deciding that she said them all a little differently.