Have we mentioned that our house has something lacking in the privacy department in certain areas? If not, consider this the first of several mentions. It’s nothing crazy, but coming from a home where we could practically strut around naked in the backyard (not that we did) to one where we can hardly go birthday suiting inside (not that we do) – let’s just say that we feel a bit exposed sometimes.

Case in point – our lovely “alley” (first mentioned here) which is a straight shot to our neighbor’s back deck (see their umbrella in the distance?). 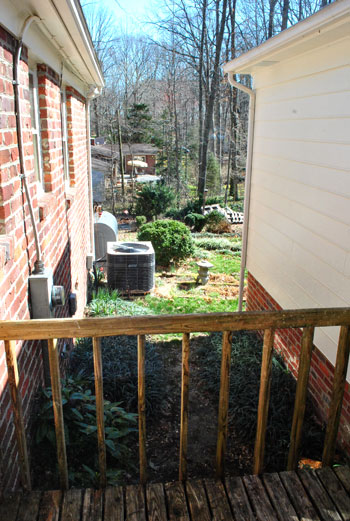 The pic above is a bit old (from this post) and as you can see from the new pic below, nature has already helped us out in the filling-in department. 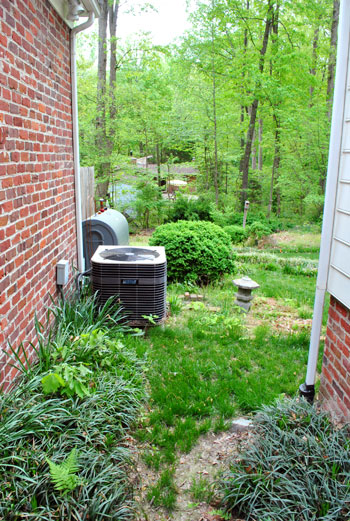 Though I still can’t help but feel slightly self-conscious at moments – like one recent night when the smoke detector next to the “alley” went off minutes after bedtime. Suddenly I found my boxer-clad self changing a faulty battery… while standing on a chair… in front of our floor-to-ceiling glass sliding doors at night with the light on. Yeah, um, howdy neighbors.

So not being vertical blind or curtain closing people when it comes to all of the common areas in our house (we’re weird, but we like our sliding doors and big picture windows unobscured to let in light and it feels like too much maintenance to walk around covering them all every evening – at least to lazy bums like ourselves) we figured that a better way to functional and long term low-maintenance privacy would be to block that shared sight-line between our houses with some fast-growing easy-care evergreens. We do like white faux wood blinds for privacy in bedrooms btw, but I guess since we were both raised in curtains-always-open-in-the-living-area houses that relied on nice wooded neighborhoods for privacy, it’s no wonder that we’re attracted to open curtains and wooded neighborhoods full o’ privacy.

So that’s the goal. Adding in more of that “wooded” adjective. Sure it’ll take some time for these little trees to grow in, but it’ll hopefully be worth it in the long run (and we’ll remember to toss on clothes if we’ll be standing on chairs in front of the slider at midnight before that point). 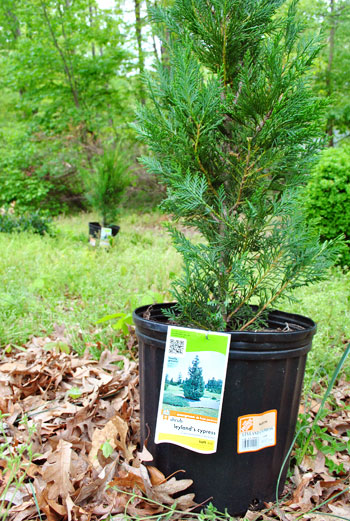 When it comes to the specifics, we got three Leyland Cypress trees on sale from Home Depot for $9.99 each (interestingly, they were $19.99 at Lowe’s, so we saved thirty bucks total by shopping around). They’ve been recommended to us countless times by local gardeners because they’re 1) fast-growing, 2) evergreen, (so the won’t drop leaves and ruin our privacy in the winter), 3) can become quite large, and 4) are pretty easy-care and hardy. Basically, the privacy screen fourfecta. And by quite large I mean 30′ tall by 10-15′ wide. Pretty amazing, right? 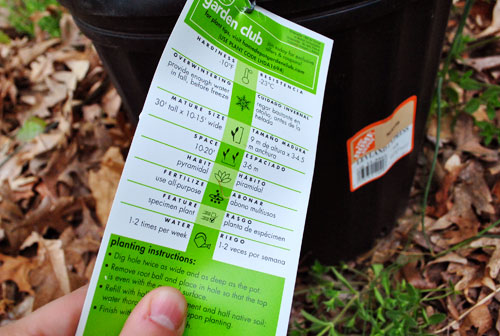 We arranged them in a triangle of sorts, so that we could plant them at least ten to fifteen feet apart (as recommended by the tag) while making sure they each would layer behind and in front of one another (instead of growing into each other) to help densely block the view. 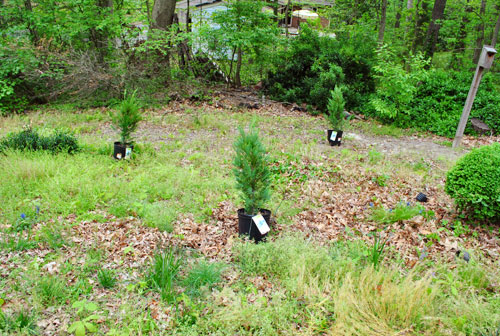 And after cutting out some dead boxwoods… 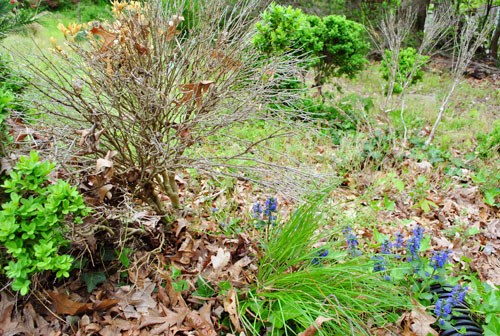 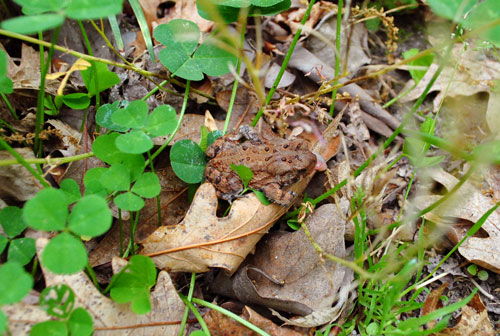 … I was ready to dig in our new Cypresses. With no help from my frog/toad friend, I might add. Make that former friend (he didn’t die or anything, he just doesn’t deserve friend status for not helping).

Through the magic of the internet, here they are all dug in. Not much to look at yet, I’ll admit. 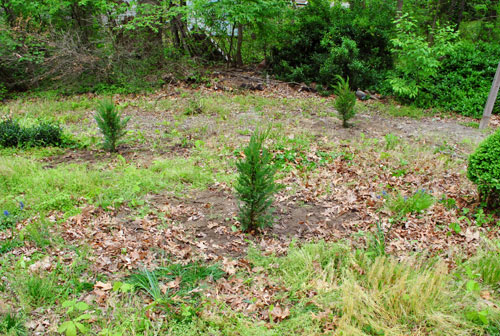 But hopefully with a bit of watering, more of these sunny days that we’ve been getting lately, and a bit of time, this trio will go from this… 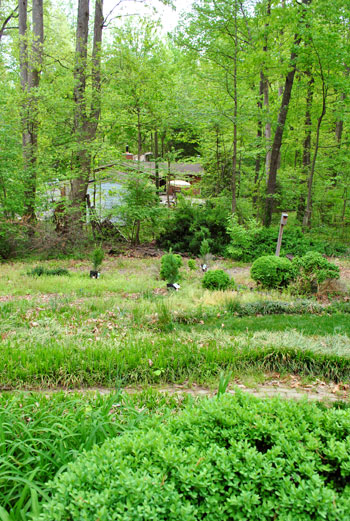 …to this. Though in real life they hopefully won’t have the weird blue-tinted discoloration (I added that to make my photoshopping visible). 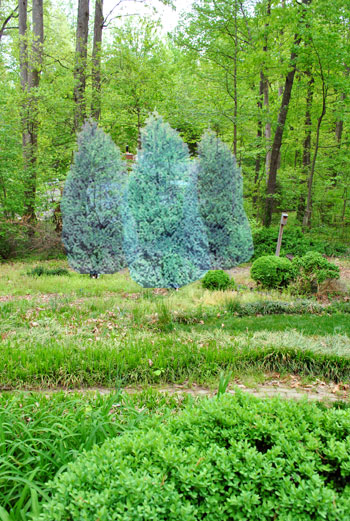 Oh, and that frog wasn’t the only woodland creature that I came upon during my tree planting adventure. Notice anything else? 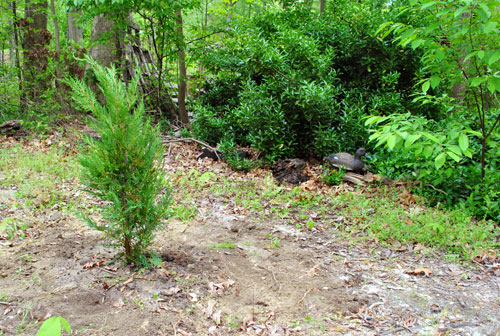 Yep, that’s a plastic duck just chilling on a log in a bush. Another fun discovery left by the previous owners (like Norman the Mailbox Squirrel). 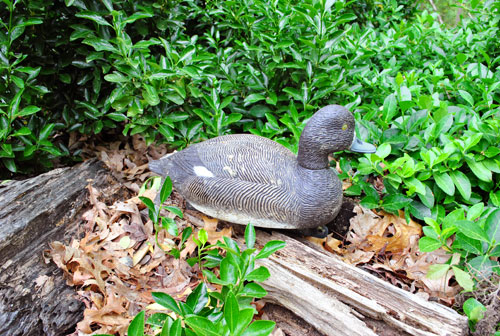 The funny thing is that finding a random duck on our property is almost like a sign that the house was meant for us. See, when we moved into our first house, the previous owner had left a fake duck head (yup, just the head) on one of our fence posts. Needless to say, it didn’t last long after this photo was snapped, but it did make us smile. 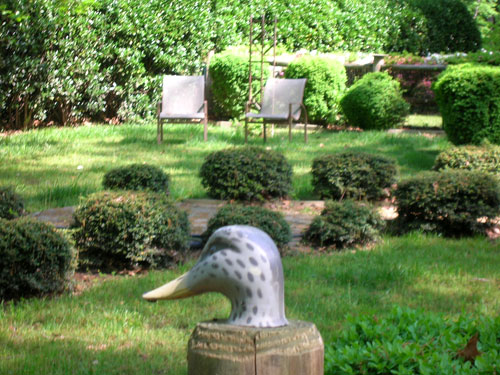 Guess there’s something to be said for a faux duck (or part of a faux duck) to make you feel at home. I just left the full-bodied duck right where I found him in that shrubbery. After all, if things go as planned with those Leyland Cypresses he won’t be able to spy on us for long. And Clara will probably love discovering him for herself in a year or two.

Have you guys ever planted any Leyland Cypresses – or another fast growing tree or bush – in the hopes of gaining some privacy? Do you just use vertical blinds and curtains like normal people? Have you ever found the head of a duck (or an entire faux duck) somewhere on your property? Are you friends with a frog (or do you someday hope to be)? So many questions, so little time.

A New Stroller, A Custom House Portrait, & Other Adventures
Live From Our House, It’s Saturday Night