Update: Things are really picking up with the Habitat For Humanity showhouse (ahh! the foundation is being laid and framing starts next week!) so there will be some Wednesdays without an afternoon post. Thanks for understanding!

Fall is the best. It’s my favorite (well, that and smiling). I love it because the weather rocks my socks and most years we’re treated to several weeks of beautiful fall colors. Yet somehow we always find ourselves rushing to accomplish something each autumn. One year it was trying to sell our first house before the leaves fell (along with our curb appeal). Last year it was cramming things in before setting off on our book tour. And this year it has been trying to grow grass in our sad excuse for a front yard.

I know, I know – landscaping posts aren’t always that exciting.  I know I’m weird for browsing fasttreeremovalatlanta.com so much. But we’ve crammed about two months worth of progress into one post in the hopes of making it a bit more satisfying than “hey, we threw down some grass seed. Doesn’t it look… seedy?” 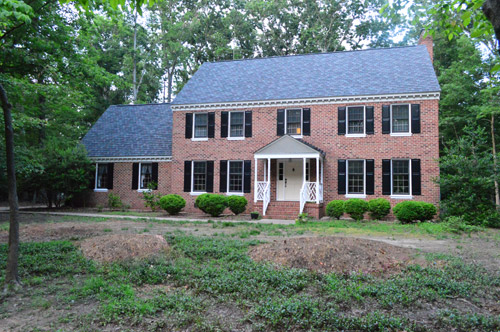 The shot above is actually from this summer, right before we asked a landscaper who was working a couple of doors down to level out some ground stump piles leftover from having a few trees removed (more on that in this post). That quick leveling job set us back a mere $60 and gave us a grass-seed-ready front yard. Or so we thought. The only issue with that one area of leveling is that it revealed that the rest of the yard wasn’t well graded at all (those freshly flattened spots were surrounded on almost every side by low points that collected water during every rain). So we had to accept that our yard wasn’t as ready for seeding as we had originally thought. Le sigh. 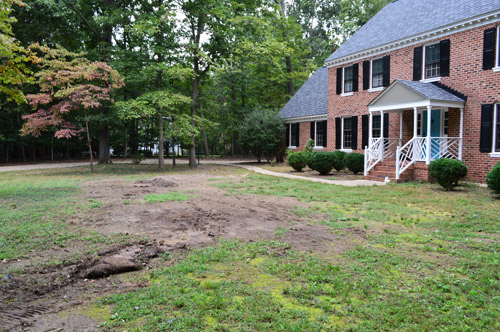 We contemplated just dumping a few bags of topsoil down and calling it good, but we (well, mostly I) kept having the nagging thought that it was going to annoy me for years to come if we didn’t just do it right the first time. I eventually got Sherry on board with the idea of having some dirt delivered and getting the whole area properly graded, something we acknowledged was a possibility in this post, but were still a little reluctant to dive into until we saw how bad the yard was after a heavy rain.

So we decided to just pull the trigger and do it right once instead of working to establish a lush yet bumpy grass yard that we’d later need to redo. Yay, right? Except we couldn’t find anyone who was available to do it. It was late September by this point and every landscaper and dirt delivery service seemed to be booked up already (we called at least ten people – even some folks from a few towns over). We had all but given up on the entire idea when, by some miracle, the original landscape guy (Steve) who did that quick little flattening session called to say that he could squeeze us in that weekend. Huzzah! And then a miscommunication got us pushed off to the following weekend. Urgh! And then a week of heavy rains bumped us back another weekend. Double urgh! So it wasn’t until the Bowers visited in mid-October that they finally arrived and we all gathered outside to watch the main dirt-centric event. 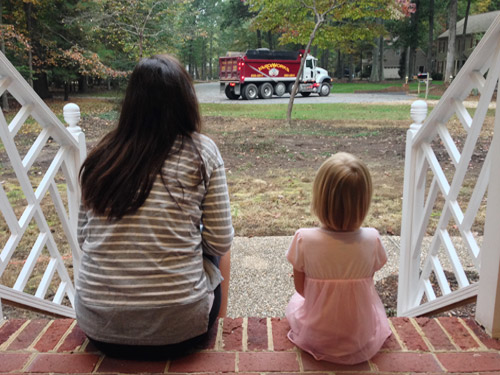 Steve assessed how much topsoil we’d need based on the size of of our yard and how much grading was necessary to leave us with something nice and flat (no more swampy low points). This was just one of two heaping truckloads that we got. Yes, there were about five car-sized dirt piles. 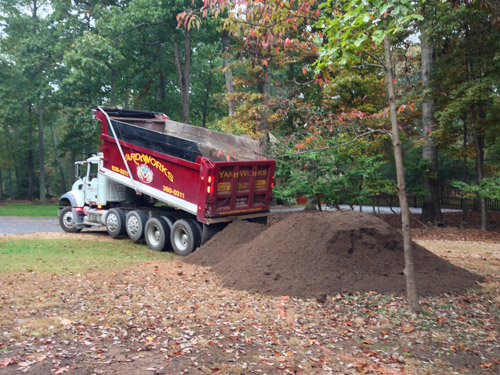 With that much dirt, there was no way Sherry and I would be able to get things done with a wheelbarrow and a rake, so we let Steve the landscaping guy go for it instead. 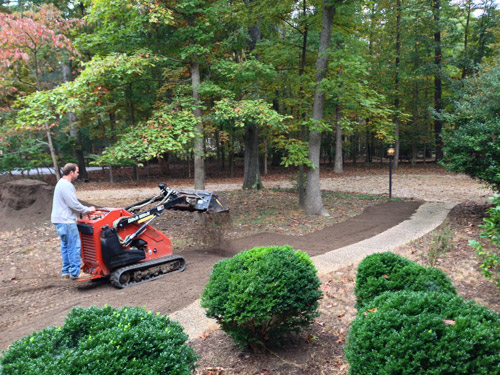 This is the part the kids enjoyed watching the most – although Clara played shy and hid behind the railing for a good portion of it. 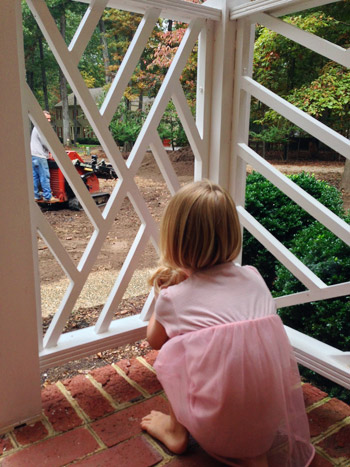 Steve had suggested that we mark off what would become mulch beds so that we didn’t waste dirt (oh the precious dirt!) in areas that wouldn’t be getting grass. So a few days before, Sherry and I used a hose to plan out some curvy beds around some of the tree groupings. A hose is nice to use because you can bend it and move it around until you like the shape, and then when you like the look of things, you can trace its shape with some marking spray to outline those future beds. We won’t actually mulch them ’til spring, so this is the last we’ll speak of them until then most likely. Shhh, these are the mulch beds that shall not be named. 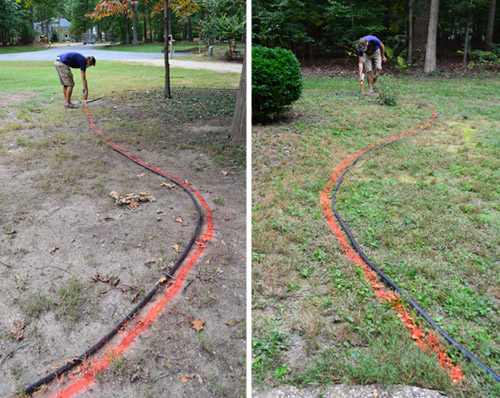 By early afternoon, the yard was looking gorgeous. Okay, I realize a bunch of dirt doesn’t really deserve the g-word, but it was really exciting to see the whole area smoothed out and no longer spotted with erratic splotches of moss, weeds, and mud (that dry looking area between the two trees is going to be a mulch bed, where we’ll add more plantings someday). Rain was in the forecast for that afternoon, so Steve recommended that we get the grass seed down ASAP so that it could sink into the fluffy topsoil before the precipitation matted it down into more solid dirt (that’s less ideal for growing grass since you want the dirt to be soft when the seed takes root instead of compressed and rock hard). You can see a single track mark from our broadcast spreader when I was just starting to put down some grass seed in this photo below: 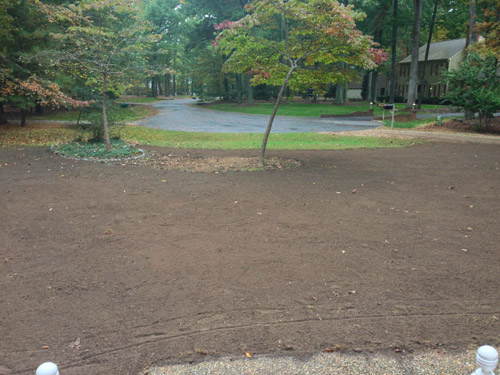 One of the reasons that we got so much dirt delivered was because we wanted to take care of this area that we affectionately call The Wetlands in the backyard. I know it looks like seed-ready dirt from this angle, but it was suuuuuper unlevel. It basically turned into an 8″ swamp after every rain (there was about a 12″ drop from the walkway to the area in the middle of this dirt-hole). 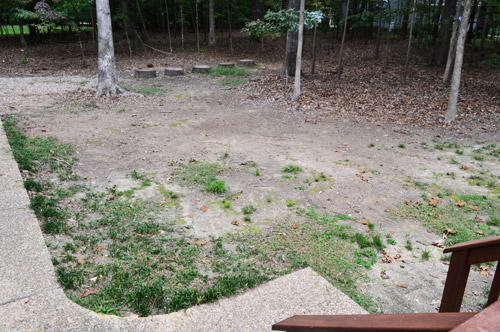 Here it is with lots of dirt filling in that entire gulley (after I had spread the grass seed). 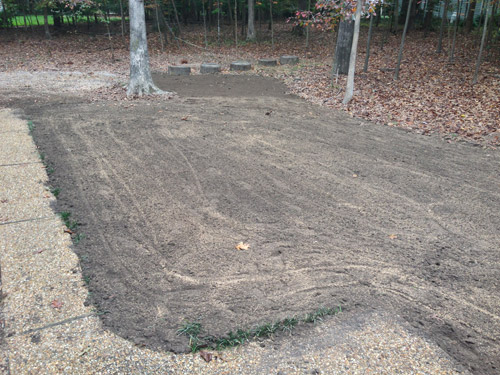 And now, through the magic of the Internet, let’s fast forward about three weeks when I snapped this photo of things starting to come in. 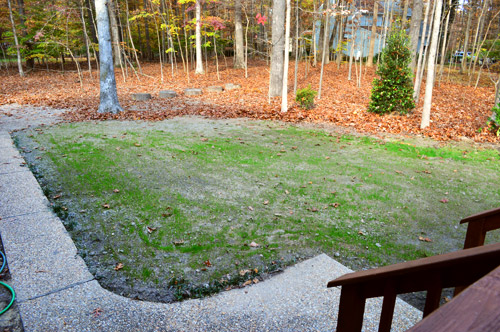 About a week later it’s even more filled in (this shot was taken a few days ago). We got a much later start on this whole seeding thing than we had hoped, so we feared we might’ve missed the boat entirely, but it has slowly been doing its thing. Phew. 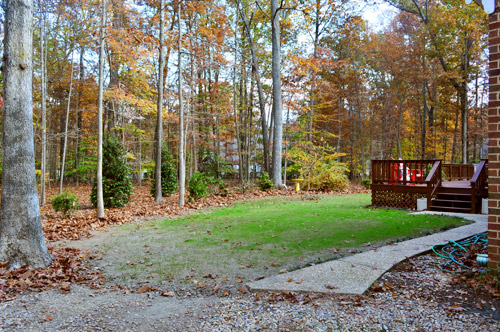 In our past experience (our first house had an all mulch front yard that we seeded from scratch), we’d never gotten thick coverage after just one season of seeding. So while it should still get even more filled in than what we have now, we’re planning to overseed next spring (and maybe again in the fall) to finally get a lush lawn back there. As for our tips for seeding, now that we’ve done it a few times, we like to use a broadcast spreader to drop the seed and then we just water it everyday for around 15 minutes with a broadcast sprinkler to establish it (we like to do it in the early morning when we wake up, just so we remember). 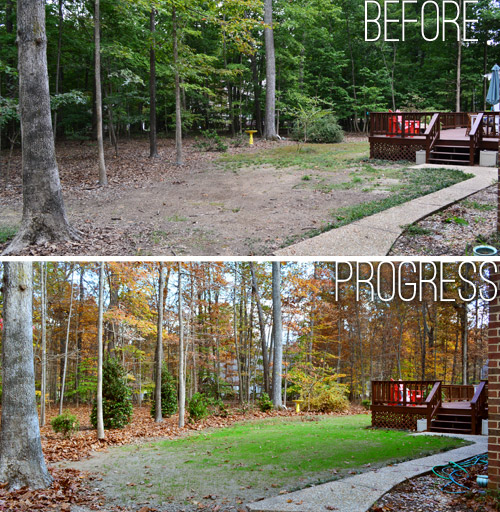 You might also notice a few more evergreen shrubs appearing in that “Progress” shot above. They’re our first step in trying to reclaim a bit more privacy back there – especially in the winter once the trees are bare. When we bought this house we knew we’d have to add some more evergreen trees to block the view of some other houses through those woods, so we told ourselves that each fall we’re going to buy a few good screening trees and shrubs in the hopes that we’ll eventually have year-round privacy when they all fill in.

These are from a local nursery (Great Big Greenhouse, for any locals who are wondering) and we just met with one of their all-knowing garden guys who recommended them for us based on our criteria: evergreen, deer-resistant, partial shade, and size (they’re all eventually supposed to grow somewhere in the neighborhood of 10 ft x 10 ft to create fence-like privacy when it’s all said and done). You can’t tell in this photo, but they’re staggered by about 6′ (they’re not all in the same line, so they should overlap in front of or behind each other instead of smashing into each other as they grow. 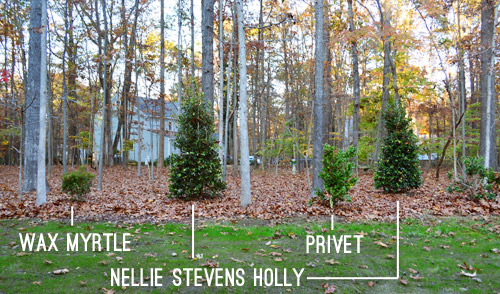 They were having a fall perennial sale so we scored them for 40% off and delivery was only $25. They also come with a one year warranty, so we’re hopeful that we can keep them alive, but it’s nice to know that we can return anything that doesn’t make it and grab something else that might work better. So far, so good, though. Oh and the wax myrtle is a native plant (we love working those in whenever we can) and it smells really good, so we hope to add more of them around the rest of the backyard as we continue screening things over time.

As for our planting tips, we’ve had luck digging holes that are twice as wide as each plant’s root ball, but only as deep as the root ball itself (sinking a tree too low in a hole is one of the ways you can really mess things up for it down the line). Digging in those big Nellie Stevens was no joke (it’s hard to tell from these photos, but they’re each about 7′ tall) but once you get them in the ground, just remembering to water them seems to be all they need to do well.

But back to grass. And back to the front yard. Here’s what it looked like this summer… 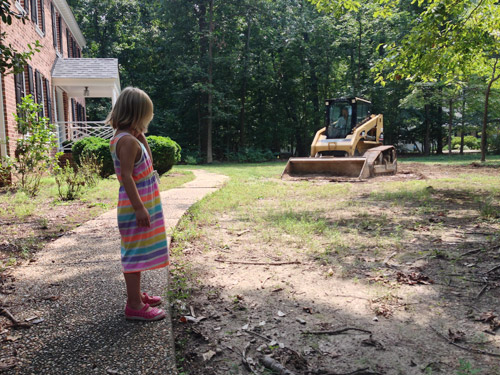 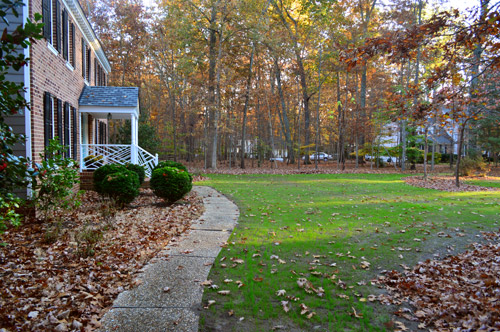 Like the backyard, it’s not fully grown in yet – but things are looking waaaay better out there. The pictures really don’t do justice to those mounds and valleys in the before shots, but it’s so much flatter and more mower-friendly now, which is a huge relief – especially since we don’t have any more little swampy spots after a big rain. 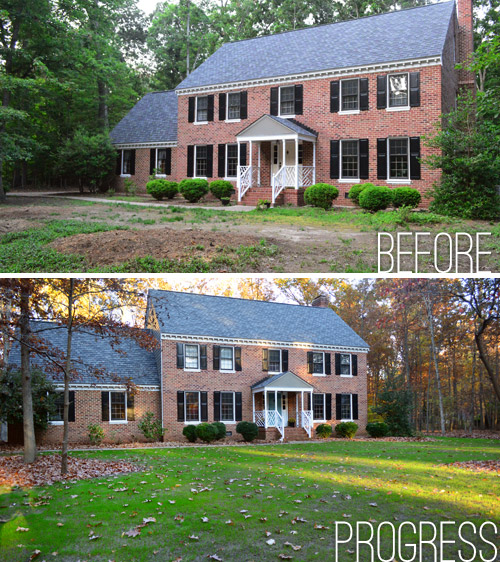 Those giant loads of topsoil were $750 and the grading was $250, which is certainly more than I ever pictured myself spending on dirt (and the main reason that Sherry had trouble getting on board with the plan). But having seen the difference it made (and will continue to make) in our efforts to liven up this home’s exterior, we’re both convinced it was money well spent. Now if only there weren’t a bazillion leaves falling on the lawn every two seconds. Don’t these trees know our baby grass blades need sunlight? C’mon! 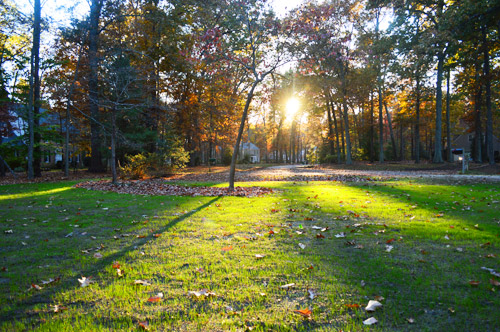 Is anyone else doing any major front and back grading or seeding? How thrilling is it to see those little green sprouts poking out of the dirt? It never gets old.

Psst- Sherry’s chatting about the bun and her pregnancy over on Young House Life.