I try not to curse. Really I do. But sewing is just not in my genetic makeup. I mean I can do a little button fix by hand and even stitch the last side of a pillow closed manually, but the other three sides that you’re supposed to do with a sewing machine? Yeah, I’m I disaster. Growing up my aunt and mom sewed all the time (they made all my Halloween costumes and my aunt even sewed my mom’s wedding dress) but whenever I tried to learn on my mom’s machine I broke it. Not just jammed it or temporarily messed it up, I legitimately ruined it (at least six episodes ended with my mom carting it off to the shop and paying lots o’ money to get it repaired). And then I wasn’t encouraged to use it quite as much if you catch my drift. I don’t blame my mom at all. I was clearly cursed.

So in an insane what-is-she-smoking turn of events, I recently purchased a nice affordable beginners sewing machine of my own with high hopes of DIYing a quilt and a fabric flag banner for Clara’s first birthday (using all of the fabrics that we picked up for her weekly photo project to create them). I figured it would come in handy for things like pillow and curtain making as well. 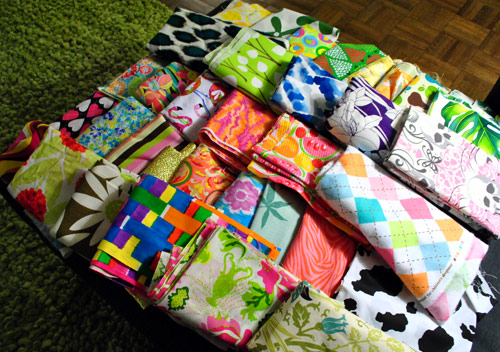 And I specifically picked something with great ratings (4.5 stars and over 150 customer reviews) on amazon.com (a Brother XL2600I) because I wanted something good for a beginner devoid of any “natural ability” whatsoever. Of course it didn’t hurt that it was around $100-200 cheaper than most fancy machines (on sale for just $89 – down from $149 – with free shipping). You know just in case I irreparably maimed it within a week of use. Which would not have surprised me. Hence the I’m-not-going-to-splurge-for-anything-great-just-yet approach. 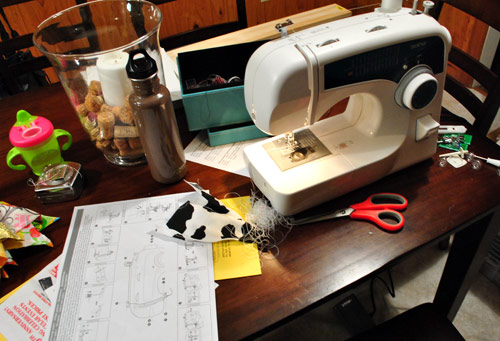 I even had a hilariously miserable and desperate text message exchange with Katie B where I basically asked her to come over and peel me off the floor and wipe away my tears and spank my disobedient machine. Yeah, she didn’t come. But she did make me laugh by comparing me to Martha. I suggested that perhaps I was Martha’s uncoordinated lesser known sister (who I dubbed Bertha) and by the end of the little iPhone fest Katie had me smiling. Gotta hand it to that girl for providing some much needed comic relief when you’re dealing with this sort of ugliness: 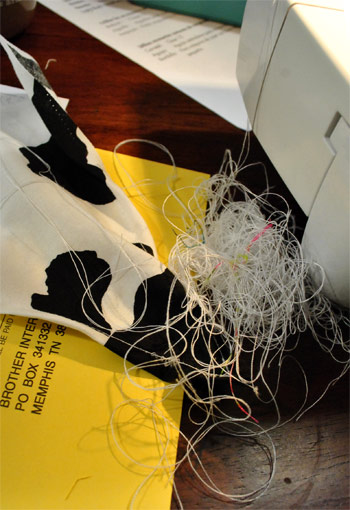 The actual issue was that I was having all sorts of tension problems (broken needles, loopy tangled underside stitches, etc) and then after two nights of despair and at least five solid hours of sheer misery I realized that I was using an unsanctioned bobbin. Seriously. After five hundred attempts at rethreading the needle and rereading the manual and googling around for ideas and texting my poor friends (who all had better things to do than listen to me whine I’m sure) it was my stupid one tenth of an inch too tall bobbin that was sabotaging me. But at least I got the root of the issue, which ended up being hilariously easy to fix (hilarious in that you-laugh-but-kind-of-cry-at-the-same-time-because-it’s-so-pathetic-and-embarrassing way).

But at least at that lowest ever point in my sewing career I figured it could only get better from there. So I kept on keeping on. Slowly but surely I’m getting to know “Oh Brother” (my sarcastically pessimistic nickname for the sewing machine slash bane of my existence) and I’ve actually made some decent progress in the world of novice sewing. For example, I made this little fabric flag banner for the bean’s big one year birthday par-tay using small triangles that I cut out of various weekly fabrics. 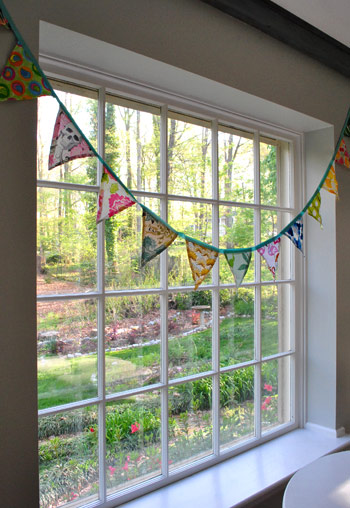 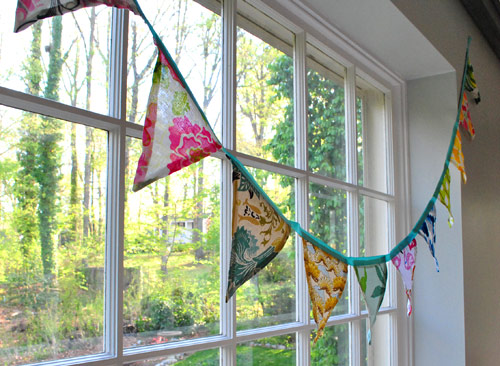 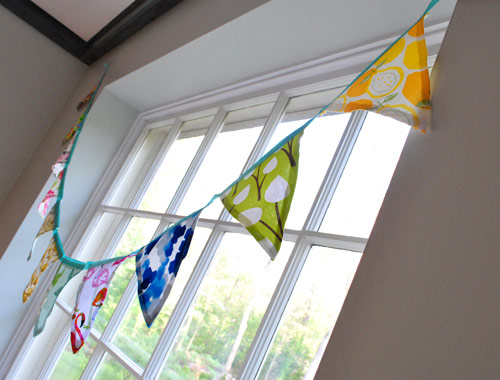 I’m not going to say that it was easy. It was harder and more annoying than The Situation’s abs. In fact, I refer to the debacle that was me attempting to sew that fabric banner as “The Real Situation.”

It took me waaaaaay too long and I probably legitimately cried ten times (we’re not talking whiny fake crying, we’re talking actual frustrated hot tears that you swipe away before anyone looks at you like you’re crazy for sew-crying). Give me a sledgehammer or a paint brush and I have no fear. But give me a robot with a motorized needle and I will show you the definition of misery. It’s just not something I can even remotely pretend to be good at. Oh well, I’ll learn. Or I won’t and I’ll get another hobby. Haha.

As for exactly how long it took, I’d guess that cutting each of the flags out took me about forty minutes in front of the TV (I used a cardstock template and placed it over the prewashed – so it was preshrunk – fabric). Then I hemmed each of the three sides of the triangle with Oh Brother, which took me well over five hours. 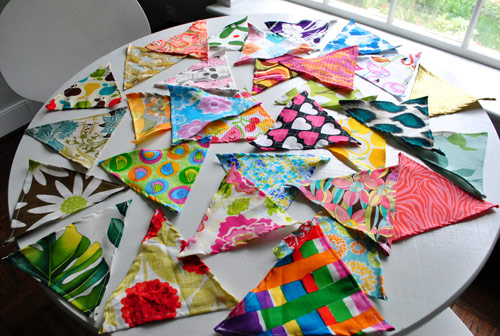 Yes, you read that right. Let’s just say there were a lot of do-overs and seam ripping and more tension issues but in the end I was left with around a dozen perfect enough triangles that I wouldn’t die from embarrassment if a teenage Clara looked closely at her beloved birthday banner (I hope the banner becomes a tradition for every b-day until the bean is too old to indulge me, so I don’t just want it to look not-terrible I want it to last for a while and look halfway decent). So although you see about 27 flags on the table above, so many of them were just garbage when you got any closer, so I picked my favorite dozen and tossed the rest unceremoniously into my rag pile.

Then in a stroke of desperation (or genius, you decide) I actually broke out some iron on hem tape to complete the project in about another half hour (for a total of 5.5+ hours spent). 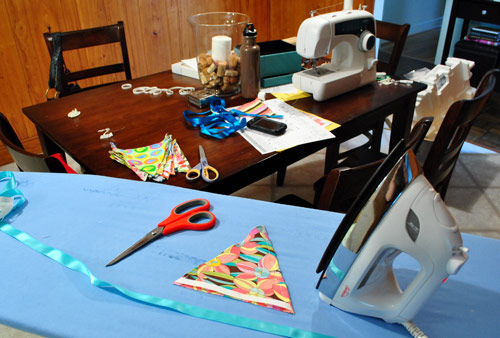 It helped to lay out the remaining not-terrible flags on the floor to play around with order until I liked what I saw. Then it was just about firing up the iron and using my trusty hem tape to attach them to the blue ribbon that I already had laying around. 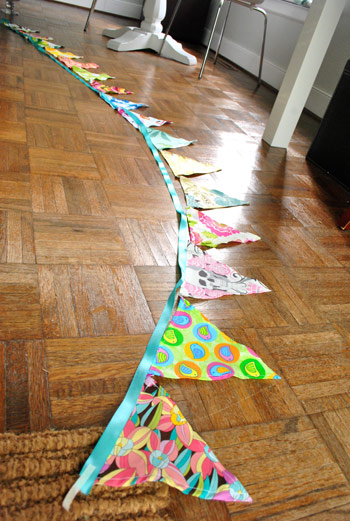 I’m pretty sure it would have easily been 10+ hours if I sewed each flag to the blue ribbon that I used for the top. But heck, I’m starting slow. I’m just glad I was able to sew those flags and not chuck Oh Brother out the slider in the sunroom (the problem with ranches is that you don’t get to dramatically drop things that you hate out of second story windows so you have to improvise). And iron-on hem tape is washable so it’s all good. And look at my little helpers. How cute were they to hang out in the kitchen while I tested my not-cursing-or-throwing-anything limits? They were some much needed sweetness for a pretty darn annoying personal challenge. 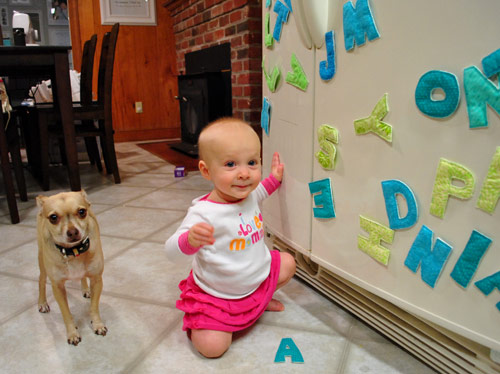 The banner looks fun and festive and it’ll be washable and hopefully will last for at least a decade or two, and best of all it was free except for the expense of Oh Brother (thanks to already having purchased each of the fabrics on clearance throughout the year for Clara’s weekly pics and using iron-on hem tape and blue ribbon that I already had). 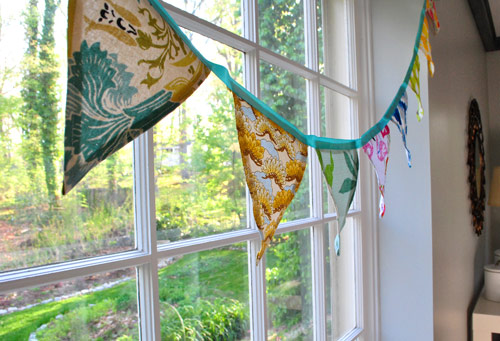 But I’m still hoping that the sewing machine purchase will end up being worth it as I attempt more projects like a very very very simplified quilt for the bean and other house-related things (a few throw pillows, maybe some curtains, etc). I’m definitely going to start slow.

So there it is. The truth. I’m no Martha Stewart. I’m terrible at sewing and it makes me curse, sob, and scream into my pillow. But who knows, this could be the beginning of a beautiful relationship with that terrifying mechanical needle. Stranger things have happened…