If at first you don’t succeed… dig more holes. At least, that’s what was on my agenda after failing our first deck footing inspection (this post explains that debacle). This project definitely isn’t moving along at the speed of lightning, but we’re creeping slowly towards the goal of a finished deck to enjoy family meals on by the end of the summer – maybe even by this time next month if we’re lucky. But remember this speed bump? 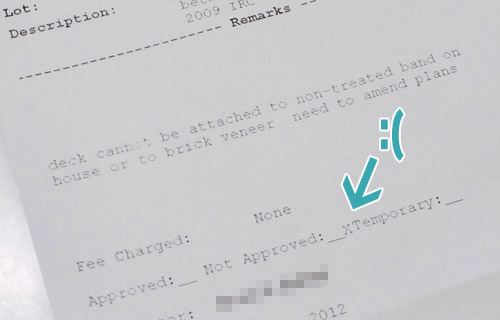 Since our original plan got the big ix-nay because we were trying to attach ledger boards to unapproved surfaces (although it was initially approved by the county), our new plan required us to make it a free-standing deck… which required us to dig more holes. Seven new holes, to be exact, for a grand total of twelve footings (five of my previous holes were still good, while only one was pretty much useless). 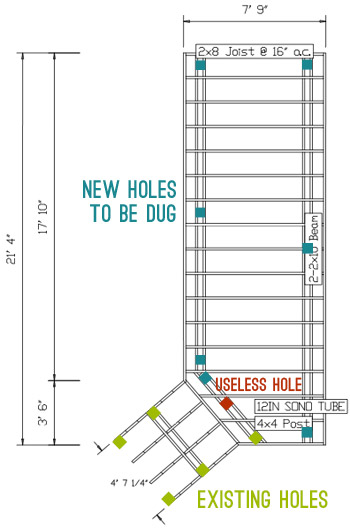 Having already learned that digging holes was tough but not unbearable, I wasn’t too intimidated. Since digging six holes had left my dad and I drenched in sweat and pretty much limp-muscled, I did feel pretty bad making him suffer through seven – but I guess it’s better than having to do all twelve at once (even though it would’ve saved me $60 from renting the auger again from Home Depot). In other words: could have been way worse. 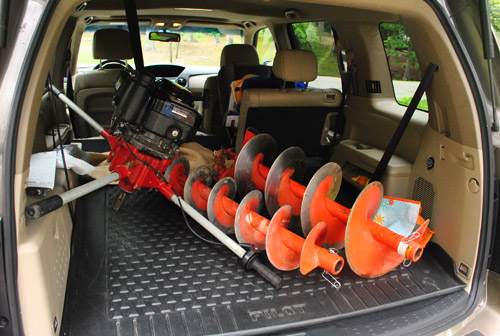 This time we borrowed both the 8″ and the 12″ auger bit, since our holes are supposed to be 12″ wide (and accidentally getting the 8″ bit last time required extra work of manually digging the holes wider). We hoped the 12″ bit wouldn’t be that much more difficult to maneuver and that it would make the work quicker. In fact, the task was shaping up to be pretty straight forward. Until this happened:

Upon digging my first “starter hole” by hand, my shovel hit something solid. I originally thought it was a root or a brick, but as I uncovered more dirt it turned out to be a giant, 6″ thick concrete slab (our guess is that it might have been the landing for a staircase that once existed here). It was too thick to bust up with the sledgehammer and nearly too heavy to even move, but after shimmying some boards underneath it my dad and I managed to shift it enough to the side so that we could dig our hole in the proper place. 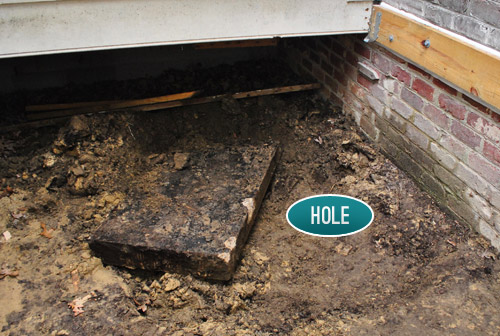 The only downside was that the whole concrete-slab-moving process was exhausting. And we hadn’t even made a single hole yet. But we sucked it up, I donned my déjà vu hat, and we powered up the auger. 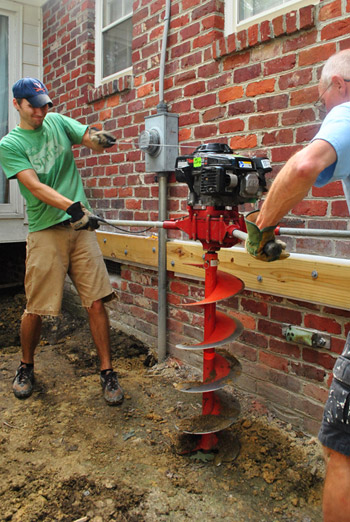 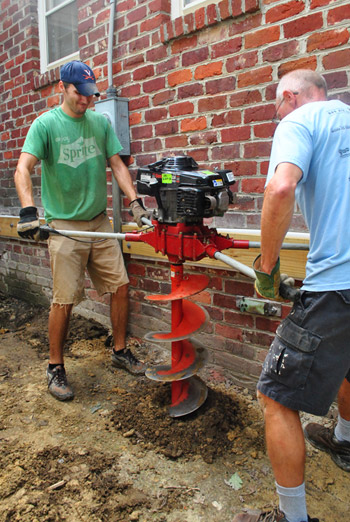 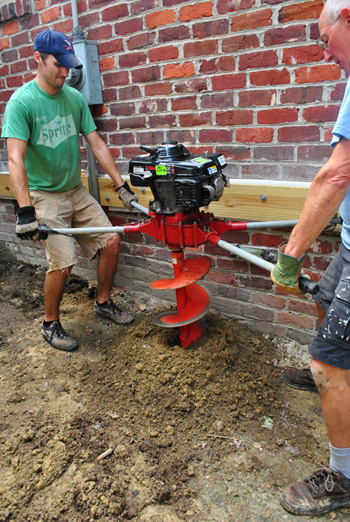 The 12″ auger bit definitely was heavier and a bit more challenging to maneuver, but not so much that we didn’t keep using it. Both us loved the fact that we automatically had our 12″ wide holes without any extra digging (or double-checking measurements). It certainly made for quicker work getting our 21″ deep holes (which are the requirement in our area). 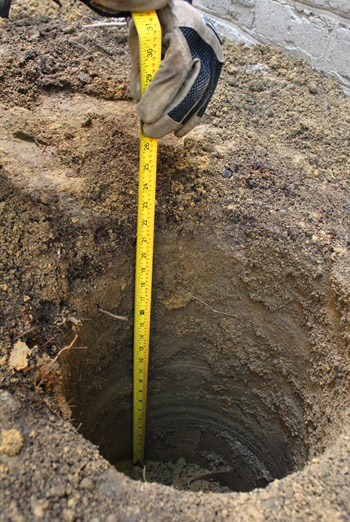 Although I still used the hole digger to manually remove some of the loose dirt left by the auger. Oh yeah, and apparently I make faces like this to entertain the wife while she documents things. Always the charmer. 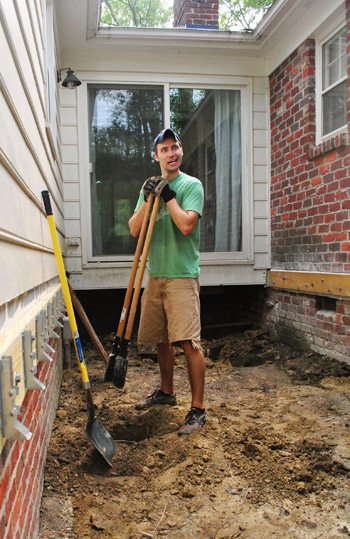 I lost track of time but it might have taken us 90 minutes to get all seven new holes dug (including moving the surprise concrete slab). So all in all, not bad at all. And we weren’t nearly as fatigued as last time. Sherry thinks it’s because it wasn’t as hot out. I think it’s because we’re just more muscle-y from the first round of digging. 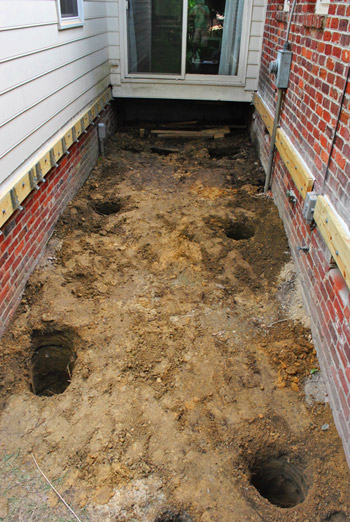 With holes dug, we crossed our fingers, bit our lips, and probably peed our pants a little bit as we called to schedule the inspector to come back the next day. I hate not succeeding at stuff, so the thought of failing again made me lose a little bit of sleep. But I’ll spare you the suspense – this is what happened: 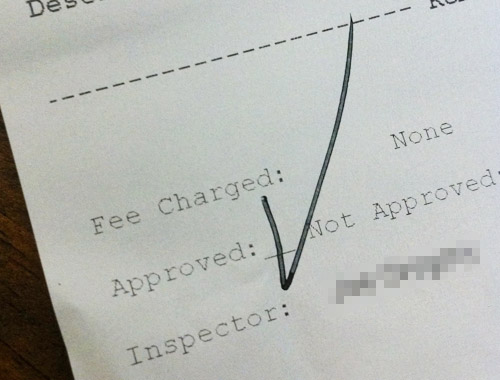 Woo to the hoo. The visit could not have gone better. It was a different inspector and he took a quick glance at my new plans, another glance at my holes, and said “looks good.” No measuring, no comment on my ledger boards, no nothing. Sherry was barely able to even sneak one picture the whole thing was so fast. 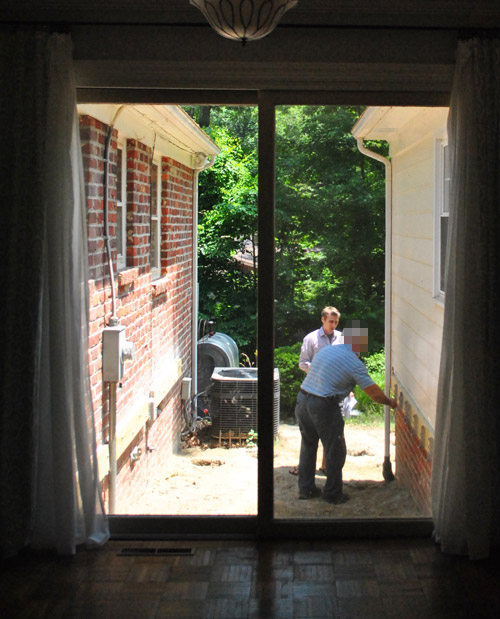 After he approved my holes, I did bother him with a few more questions. Most importantly, I confirmed with him that I could leave my ledger boards up to use as rim boards instead (they wouldn’t bear the weight of the deck- the posts would do that – but they’d be a nice place to attach things around the house for the perimeter stability that’s required on a freestanding deck). This was fantastic news because it meant not only was our work not in vain, but also that we wouldn’t have to waste time undoing it all (and re-siding the house where those ledger boards had been). I just have to be sure to counterflash them (i.e. put flashing over the top of the ledger) which is something I was planning to do anyways.

So with all of the excitement over having passed inspection, I did the natural thing and texted my mom. 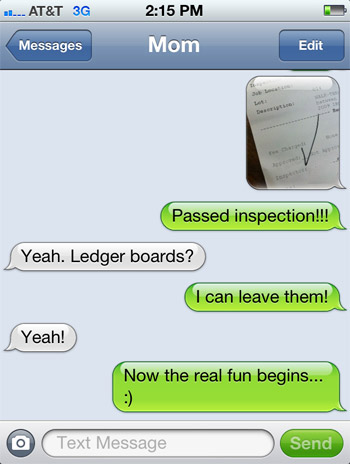 So now I’ve gotta place my order for additional materials (more posts and girder boards) and then I can start actually building this darn thing. And let’s hope I get Inspector #2 when it’s time for my final inspection! In sharing-the-love news, we really appreciated you guys commiserating with us last week by spilling all of your failure stories. I promise, it helped more than you can imagine. So let’s try a more positive spin this week: what problems have you guys worked through lately (house-wise or otherwise)? Is there anything that seemed like a negative that did an 180 and turned out to work in your favor?

Psst- A huge thanks goes out to everyone who checked in on us after the crazy storm on Friday night! We were without power until Sunday afternoon (and we witnessed some pretty crazy tornado-like winds outside our window on Friday night), but thankfully our house was spared any damage and we’re so glad that our power has been restored. High fives to Dominion Power (and all the other power companies from out of state who drove up to lend a hand).