We’re excited to share the cottage that we mentioned on Friday, especially since a bunch of you seemed anxious for us to spill all the beans (and a lot more photos). So here’s the deal: it’s about 45 minutes west of Richmond in Columbia, Virginia, it’s called Rassawek, and it’s a bonafide log cabin from 1910. It was actually moved to this location by the family who owns Rassawek (which is also a vineyard) and there were all sorts of other fun out-buildings nearby (many of which were moved as well) along with the coolest treehouse we’ve ever seen. So let’s get this tour started… 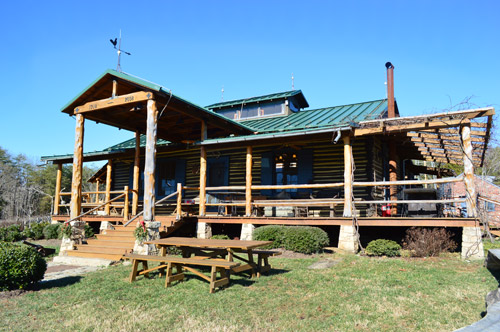 John’s sister was actually the one who found it and suggested it as a way for the entire family (nearly two dozen of us, with 8 kids running around) to come together for a nice Christmas meal together at one big table, followed by a s’more roast and a big ol’ sleepover. We all jumped at the chance to shirk hosting duties in favor of gathering at a cabin in the woods for a pot-luck Christmas adventure, and although we had no idea it would be “crash worthy” as soon as we got there we were like… uh, yeah – this is the coolest place ever. 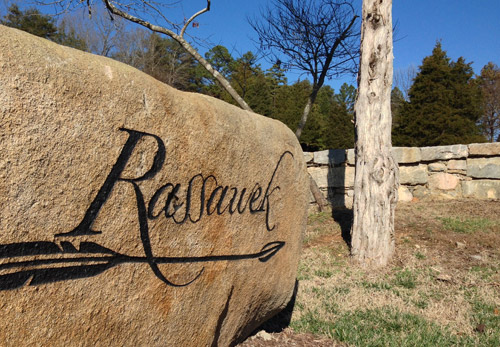 We already shared a sneak peek of one of my favorite shots in Friday’s post. See how those amazingly graphic walls look like they’re black and white painted stripes? 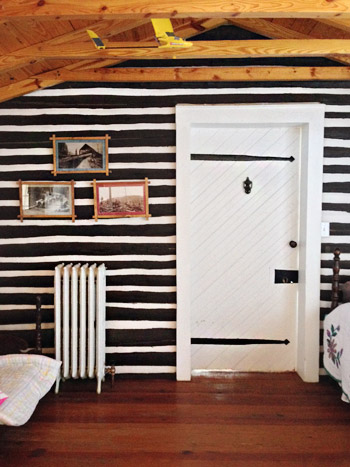 They’re actually dark stained logs with white plaster around them! I love how irregular and textural they are. And everything from the exposed rafters to the antique radiators and even the dark hardware on that cool white diagonally-slatted door stole my heart. Suddenly I want interior door knockers and doors that lock with skeleton keys.

That was one of the only rooms with an extra-dark stained log wall like that, so the main living area had them in a more mid-toned color, just like all of the beams overhead. 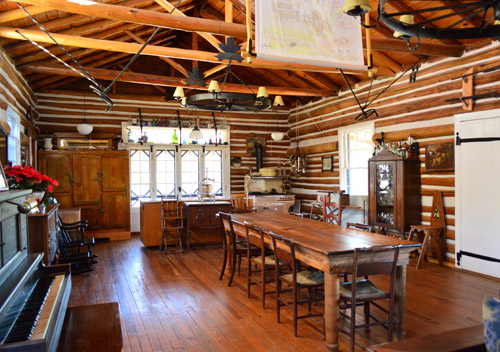 The background of the shot above was actually the kitchen, which was really open and integrated into the dining and living area. If we move a little closer you can see the sweet old stove on the right side of that back wall. 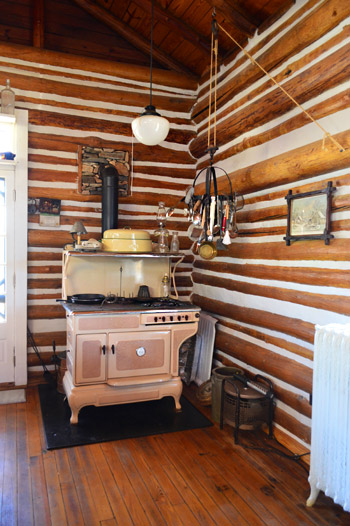 There were lots of cool pulleys with old rope and chunky iron hardware everywhere, which really added to the rustic cabin feeling. Like this old metal utensil holder dangling over the stove… 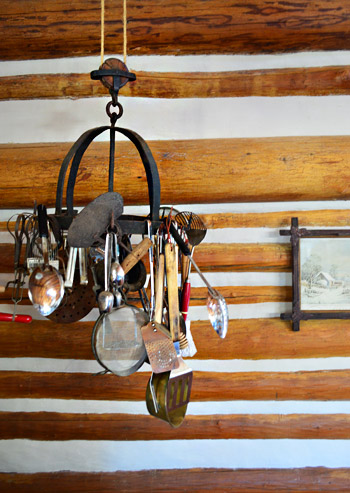 On the other side of the kitchen was this amazingly chunky butcher block along with what looked like a metal chest with brass hardware… but upon closer inspection we realized that was the refrigerator/freezer! Each of those doors was a different compartment, and some were colder (freezer-cold) thanks to big bags of ice inside. 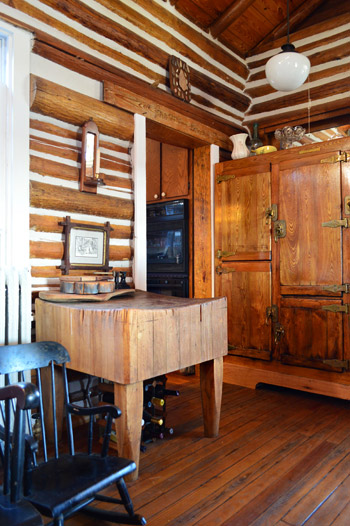 If you spin around with your back to that wall, you’ll find yourself facing the fireplace, which is on the living room side of the space. 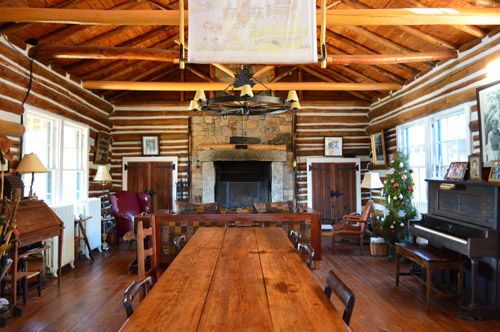 We pretty much had a giant fire burning the entire time we were there, and we all fought to sit in those chairs and on that sofa since they were the coziest spots in the house. You’ll notice from the shot above that there was no TV over the fireplace, but this drop-down projector screen could be lowered for movie viewing (and the projector itself was hidden in one of the overhead beams). 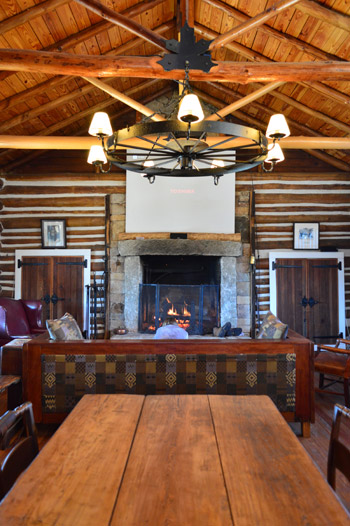 Oh and see those wooden doors on either side of the fireplace in the shot above? Those led directly to outside cubbies full of firewood. Flinging them open was chilly, but it was so convenient to access the firewood without putting on shoes. 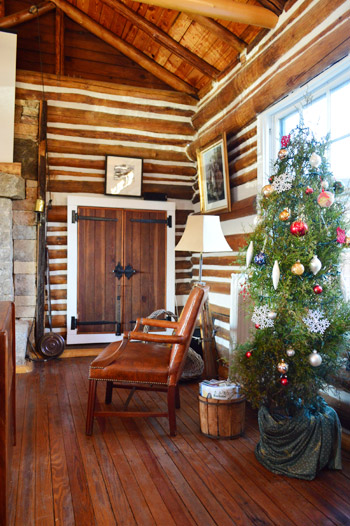 Here’s the projector in action (Elf, anyone?), with John toasting up some marshmallows for the kids. 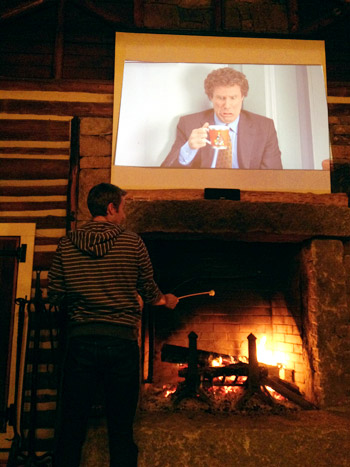 Behind that big great room were the bedrooms, but it was impossible to shoot them for you guys since we had a million family members (and bags) back there. There were two big rooms full of beds (bunks, etc) and one small bedroom that was more private as well (with a full sized bed). Some of our family members left after dinner, but 16 of us slept over – although we’re a family full of kids in sleeping bags and pack & plays, so there were probably beds for around a dozen people assuming that two slept in the doubles/fulls and one slept in the twin beds/top bunks.

That big living room in the front of the cabin was a really great space for everyone to gather, but that table in the middle of the room wasn’t where we had Christmas dinner. That was outside in this greenhouse. It was AMAZING. Apparently some people get married here, and as soon as we pulled up, I could totally see why. This giant glass room was sunny and bright with the coolest features (heated floors, a big stone fireplace, one giant table for everyone, etc). 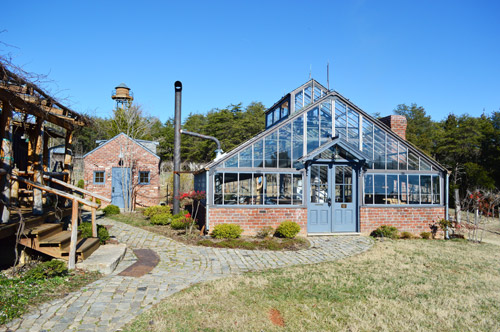 So this is where our giant group chowed down. We never thought we’d all end up at the same table (none of our houses would have accommodated that) so it was really fun to see everyone without being spread out into different rooms. 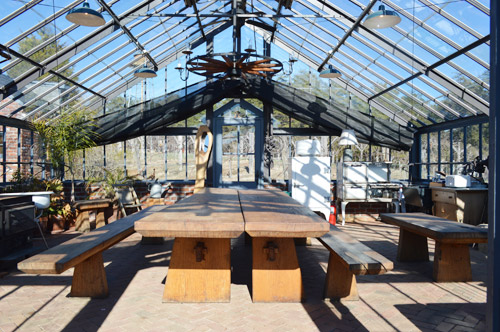 There were some other really cool features outside like this bench, which was an old tree they just sliced through the middle and turned into a bench). 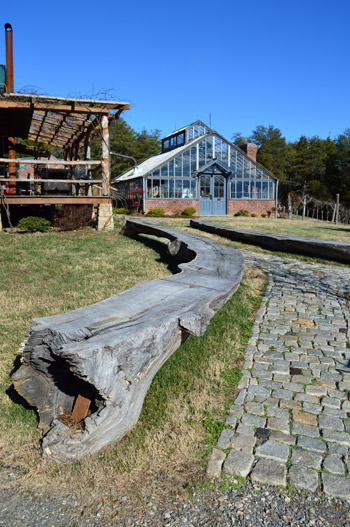 And here’s an outside shot of those two doors on either side of the fireplace that open to provide firewood access. It was pretty cold but nice and sunny, so we logged a bunch of outside time with the kids. 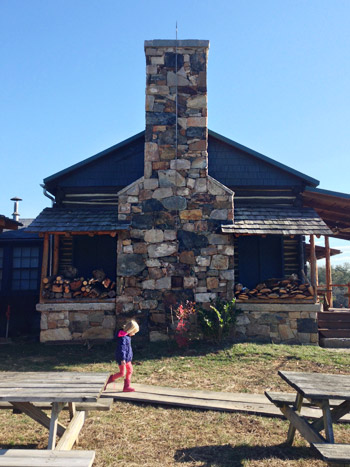 We also trekked down to this cool old barn, where some wedding receptions take place. 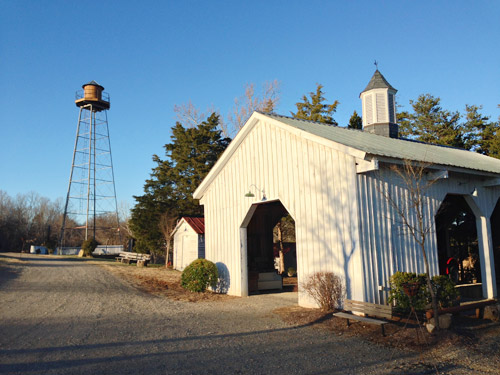 It was currently housing an old red truck that the kids all took turns posing with. There were also wall shelves full of fun vintage items like old decander bottles, buckets, and Coca cola crates. 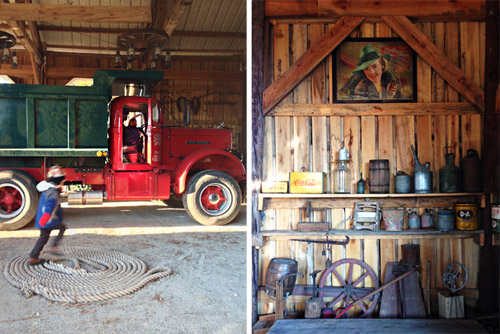 And last but not least, was the tree house. It was all made from old trees and lumber from the property, and there was access through that little door in the trunk as well as the long wooden ramp that you see in the back left of this photo. So the bigger kids could “take the trunk up” while the little ones and grown ups could take the ramp. 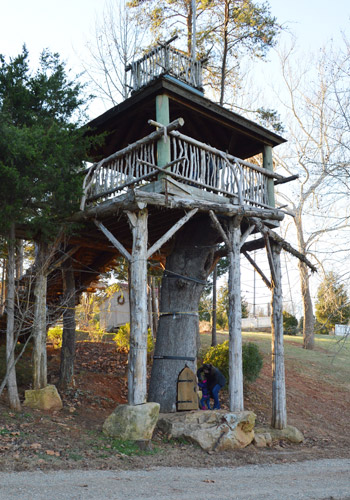 Clara was in love. 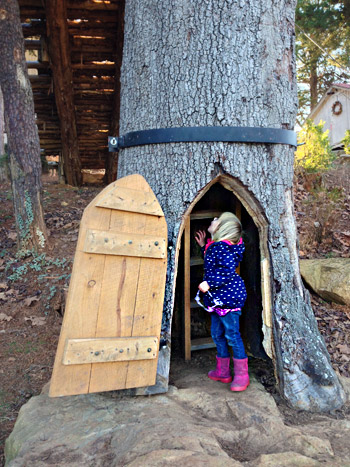 And let’s just duck back inside since we forgot to share this tiny bed that Burger got to get cozy on (hooray for dog-friendly cabins). 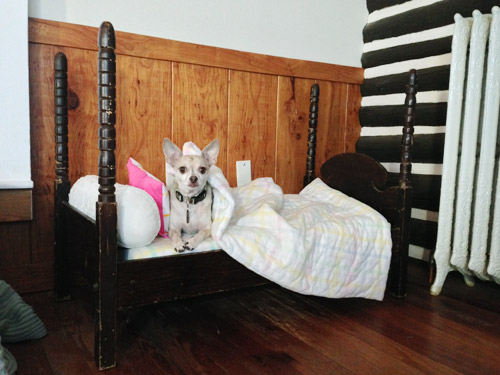 There was also this sweet black and white bathroom, complete with vintage tile and an old clawfoot tub. 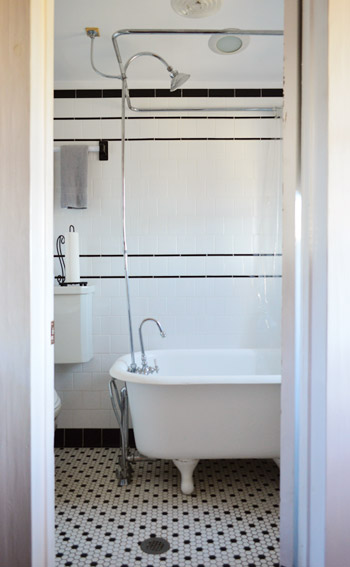 So there’s our little tour of Rassawek. I hope you guys are all inspired to build a log cabin now. You think I’m joking, but it’s now on my bucket list. Maybe when we retire we’ll build one for all of our future grandkids to gather for the holidays. A gal can dream…