Alternate post title: Come And Knob On Our Door. Don’t you love a good forced pun on a Wednesday morning?

Ever since we shared a bunch of doorknob options last week (and ordered the ones we liked the most), we’ve been waiting for them to arrive so that our upstairs doors could finally have some closure. Literally, we couldn’t close any of the doors. So when the box landed on our porch, we got right on installing them. 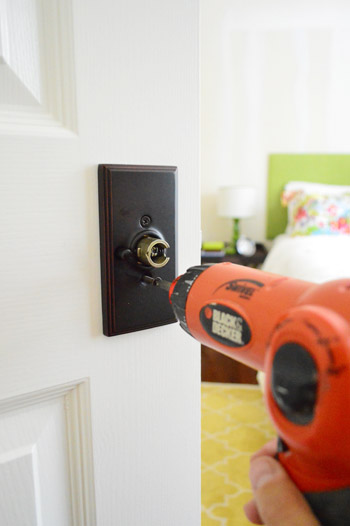 Like many DIY projects, adding the new knobs was a bit more complicated than we anticipated. The latch assembly was bigger than the existing holes in our doors, so I had to use a drill to carve them out a bit wider. I tried a file at first (as the knob instructions suggested) but it took a lot more time and effort than using the spinning drill bit to chip away at it, so that became my preferred method. 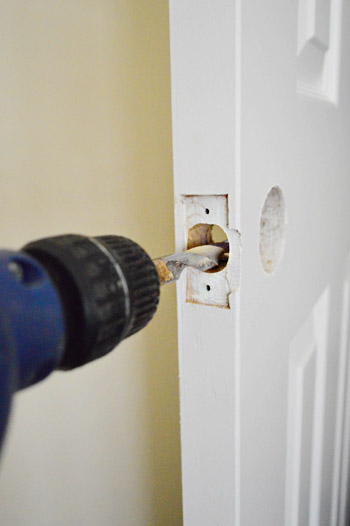 I had to do that on every single door (all eleven of them), so it definitely added to the timeline (and mess) of the project. On five of the doors I also had to chisel out this notch a bit deeper because it wasn’t allowing the latch to stick far enough into the hole where it had to line up with the knobs. 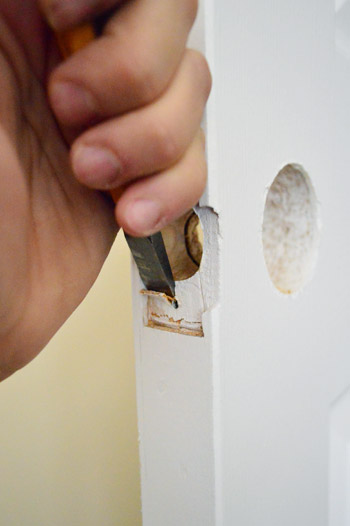 So, what I thought might be an hour of work turned into a four hour drilling and chiseling marathon (oh DIY, you unpredictable beast, you). But in the end, it was time well spent. 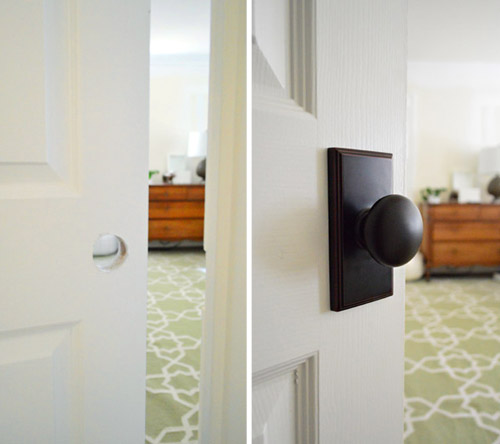 I didn’t really realize how unfinished the upstairs hallway looked with all of the naked doors staring at us. Although I’m sure Clara will miss peeking through the open knob holes and making faces. 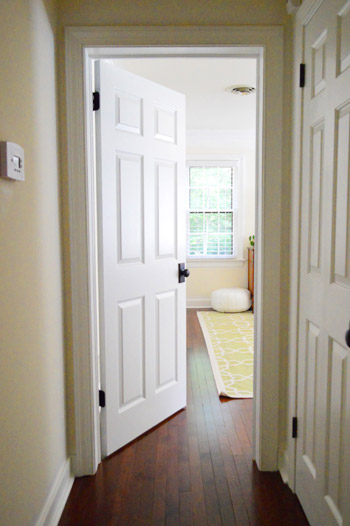 This is the best I could do to get all of the doors into one shot (the master bedroom – seen above – is behind me). Taking this shot was actually the first time we’ve ever been able to close them all since moving in, which has been especially nice for rooms like Clara’s (no more propping the door shut with a floor pillow for naps) and the bathroom (for, well, obvious reasons). 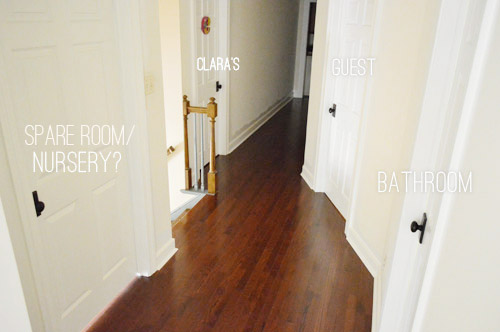 We’re really happy that we went with the knobs with the big back plate too. They’re a nice traditional touch without looking overly ornate. Sherry says they’re like little exclamation points on every door, which is pretty accurate I think. They sort of quietly make a statement without being crazy and compete-y if that makes sense. 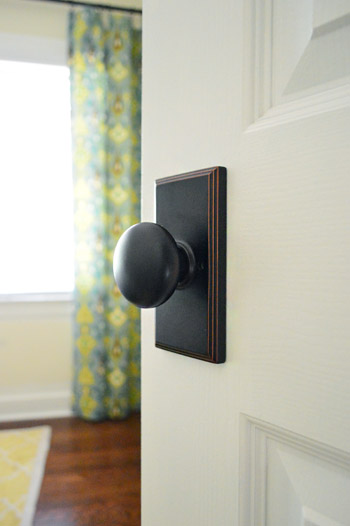 And as mentioned in last week’s post, we opted to put versions without the back plate on the closets and bathrooms to save a bit of dough (they were $10 less). We ended up putting a plated version on the hall bathroom too, just so that it didn’t stick out among the other doorways in the hallway when you get to the top of the stairs. So the plate-less version ended up going on the attic door, since it’s tucked away beyond the laundry area.

There’s also a two-doored linen closet in the hallway (you can see half of it in the fourth picture), but we thought two of the plated doorknobs right next to each other would be too much for that, so it got the basic closet ones on it as well as all of the other closets, which is nice. It blends since everything is the same finish, and it’s sort of a subtle reminder that the doors with the back plates are rooms, whereas any door with a regular knob is just a closet (or the attic storage room). 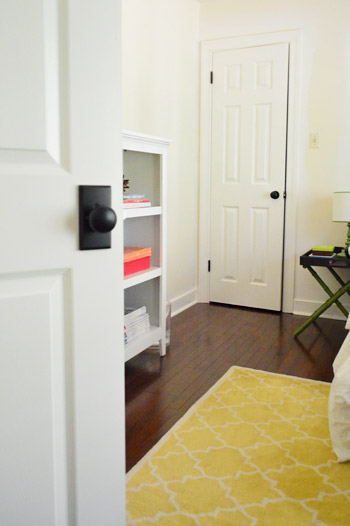 Last week some folks wondered if/how these doors locked, so we snapped these detail pics. On the inside there’s a little button behind the knob that you can push to lock it, and it unlocks when you turn the knob from the inside. We like having locks around so Clara’s exposed to them and can learn about them (we worry she’d lock herself into her friend’s room or a hotel bathroom or something if she never learned what they were and not to touch them). And it’s nice to know that if Clara were ever to lock herself in, there’s a keyhole on the other side that pops it right open with a flat silver key (see that small hole in the photo on the right below?). We’ve stuck the keys in our junk-drawer for easy grabbing, but so far we have lived with the doorknobs for a few days and Clara has heeded our “please don’t touch that part” requests. Update: Thanks for the tips to put the keys on top of each door! We did that in our houses growing up, but these keys are larger and flat (sort of like a hinge) so they wouldn’t balance on the door frame. 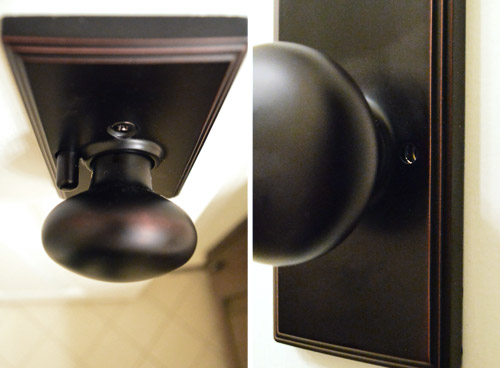 Which is good because we don’t want any funny business going on behind closed doors around here. We already caught Burger playing with Clara’s old play mat. Sneaky chihuahua… 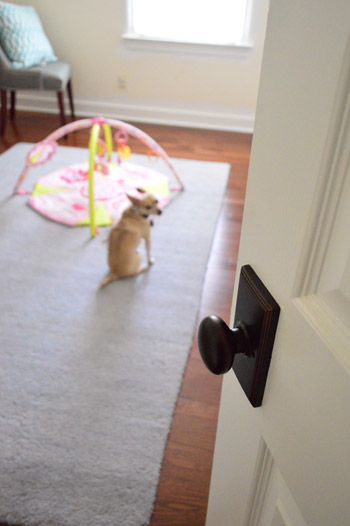 So we’re glad that we don’t have a bunch of holey doors giving us the stink eye, but when it comes to furniture placement, window treatments, closet organization, and paint picks for the walls… let’s just say that we’ve lived here for two weeks and it looks like we moved in two weeks ago. There are still chairs and boxes in weird places, bare walls and mostly bare windows, and a whole lot to be done. But planning is the fun part for us. We’ve been brainstorming late into the night until one of us stops talking and we realize they’re asleep and we’re talking to nobody.