You guys probably remember us mentioning “the bed & breakfast” house around the corner from us a few times. We’ve admired it for years. Not just because it has an in-ground pool, a tennis court, and a picnic area, but also because it’s just about the most charming exterior around. Here’s a pic we snapped during a snowstorm last year: 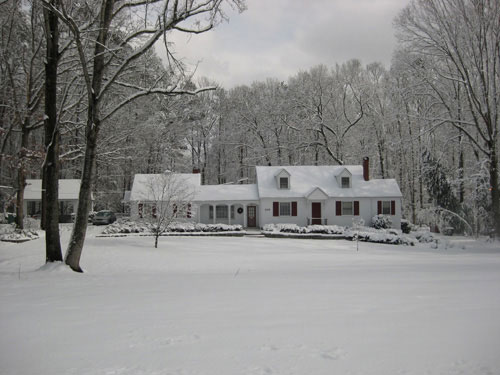 In fact, when Sherry and I started our house hunt this fall, we secretly schemed about knocking on their door and begging the owner to let us buy it. But before we could muster the confidence to march up to their doorstep we learned that someone else had beaten us to the punch. The nerve. It had already been sold privately (just a few weeks prior), with nary a “for sale” sign in sight.

So when the lucky bast-, er, people who snatched up our dream house from right under our noses introduced themselves at our moving sale last month, it was a little bittersweet (sweet mainly because they were buying about $100 in patio furniture and rugs from us). But sweet also because they were amazingly nice, and they even invited us over for a tour. Sherry had been grumbling something about not being able to die without knowing what that house looked like on the inside, so I was happy that my not dying wife (well, I guess everyone’s dying…) would get her odd home-related wish fulfilled.

And sure enough, like a celebrity who’s shorter in person, the house failed to live up to our intensely high expectations. Which made us love our future house even more for being so perfect that it inadvertently surpassed even our “dream house” once we had seen the inside. Don’t get us wrong. It’s not like it wasn’t a great house. Because it was. It’s bursting with makeover potential, and is actually a much uglier “before” than our new one (you’ll have to trust us since we couldn’t snap pics, but there was harrowing flowery wallpaper, old blue carpeting, decrepit light fixtures, red laminate countertops, etc). And the new owners knew it. In fact, they were painting and stripping wallpaper while we were there getting the tour (gotta love that they’re fellow DIY enthusiasts). We have no doubt that they’ll do some pretty amazing things to it, especially since they shared some of their plans as they gave us the tour.

In the end we both walked out knowing that it wasn’t the right house for us and the fact that it had sold before we even had a shot at it was how it was supposed to go. It wasn’t the open-floor plan, single-level, and growing-family-friendly home that we need right now. Plus maintaining that lawn… and pool… and tennis court is probably not the easiest thing for parents of a six-month old. So not only did we get closure when it comes to wondering “what could’ve been?” if we’d knocked on that door a bit sooner, we’re also really excited that it has owners with big plans for that sweet house that we’ll always refer to as “the bed and breakfast.” Which definitely sounds better to us than “the one that got away.” Whew.

Pssst- We announced this week’s giveaway winner. Click here to see if it’s you.

Holiday Decorating: Making Faux Presents For The Mantel
Why Cohesive Flooring Is Key In A Small Home