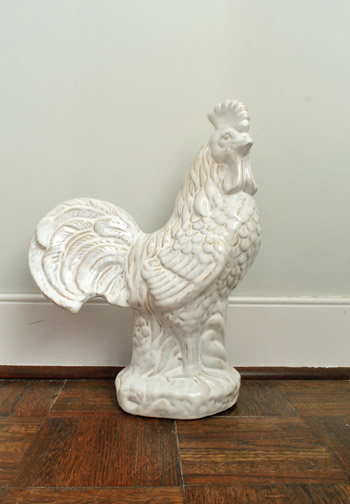 I’ve actually been hiding this $12 HomeGoods find in our playroom for… oh… five months? So it was about time I attended to him. Yup, this guy’s part of the self-imposed initiative I like to call the “Dude Get On That Already” challenge, since I’ve solemnly vowed to use it or lose it (aka: use it or craigslist/donate it) when it comes to all the things we’ve been hoarding in our full-to-the-brim playroom.

At first glance you might think “he’s a fine looking roughly weathered white & tan rooster” (or “you need ceramic animal rehab” which could also be true) but I thought his distressed white finish was a little more country than my usual crisp & modern ceramic animal tastes, so I decided that giving him a coat of new color would be just the thing. And I wanted to pick a pretty daring color, just because… well, he’s a giant rooster. Don’t want him to take himself too seriously now do I? So after standing in the spray paint aisle for at least ten minutes weighing all the bold and bright options (and singing Jingle Bells to keep the bean entertained), I grabbed Rustoleum’s Painter’s Touch in Aubergine (satin). And I was plum excited to use it. Groan. Sorry, the puns just happen. It’s a gift and a curse. 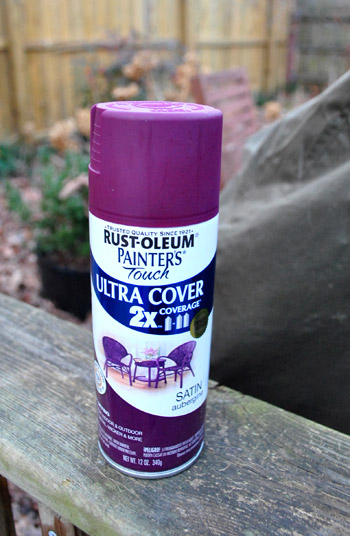 If I really wanted to be an overachiever, I would have used some spray primer (that always helps paint “grab on” when you’re spraying slippery things like ceramic) – but because the can said “two times the coverage” I figured I’d try my luck without it and just go back and add a layer of primer if things went haywire. Luckily they didn’t. I just did my usual thin misted coats routine (read more on that here). Check out how crazy things were looking at first. If you’re spray painting lightly and thinly, there’s not good coverage until the third or fourth coat, so the first one had him looking a little… hot pink: 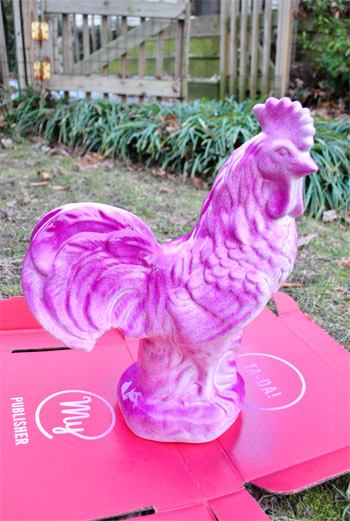 But after two more thin and even coats, coverage was good. And Jarvis was aubergine. Oh that’s his name. Everything with a face deserves a name, don’t you think? 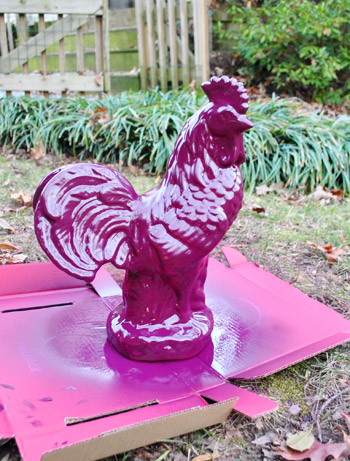 He looks pretty fun in front of the light avocado walls in the kitchen. 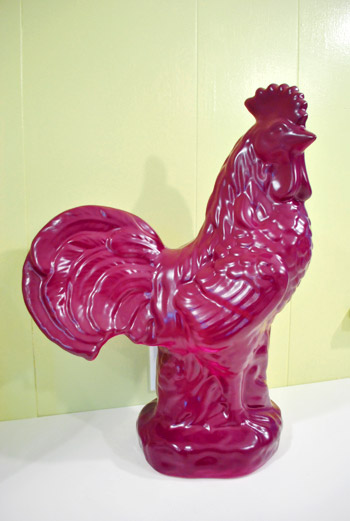 Oh and in case the scale wasn’t clear until this photo, he’s giant. Like a foot and a half tall. Who doesn’t want a giant aubergine rooster named Jarvis waiting in the kitchen to greet you in the morning? Cock-a-doodle-do to you too, Jarvis. 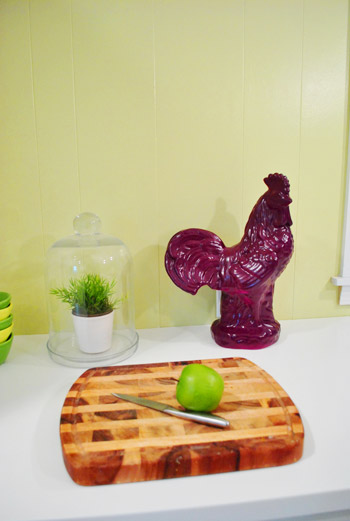 Although if I’m being honest, I’m not 100% sold on the color. It’s fun, but I’m not sure as the kitchen comes together if he won’t get a few more coats of another bright color someday. Say yellow… or slate blue. So I’ll keep you posted. Plum is fun, so who knows – it could totally stay. 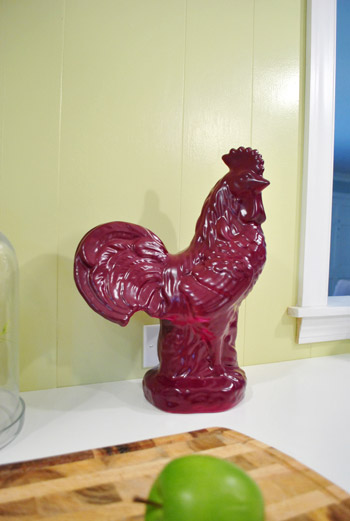 What do you guys collect and stash in a spare corner/room/closet only to look at it months later and feel crappy for just leaving it there? These “Dude Get On That Already” projects are small, but they’re making me feel pretty good for some reason. Maybe it’s the whole “every little bit helps” thing? Or the fact that we’re inching towards clearing out the playroom which means it’ll be a blank canvas for paint and curtains and a rug and furniture and accessories. Wheee. It’s almost like that dream when you find an extra room in your house. Except we’ve always known it was there and have been filling it with weird stuff instead of discovering a secret wall or staircase that leads to it. Am I the only one who has that dream?

Psst- Jarvis is second to none when it comes to giant roosters… except for Beyoncé. If you haven’t read the funniest post on the internet about her yet (salty language warning) check that out here.

The Latest On The Book
Gotcha Covered: Building A Wood Range Hood Cover