It’s official. We’ve checked off 11 things and there are just seven more to go. Two weeks ago, we shared our Children’s Hospital makeover project with you guys, and this week things really got rolling. As in, we got to start actually installing the room. Holy holly jolly, Batman! 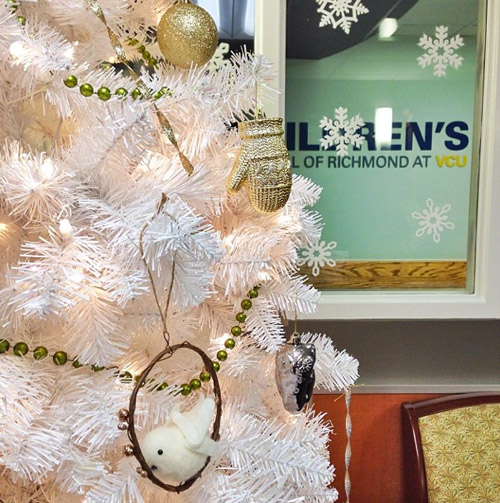 The shot above is a sneak peek of the tree that we Instgrammed yesterday and, as annoying as sneak peeks are (we know, we know) the good news is that we’re 60% done with everything (woot!). And since many of you were asking what we’ve been up to in there, we thought it was a good time for an update on our progress.

You know we like sharing projects in real time as we go, so here’s what our To Do list is looking like as of this morning:

We’d share wider room shots except we’re still waiting on around 40% of stuff to get loaded in (some items are still being made/delivered/etc – like our window treatments, armchair for the corner, etc), so… hopefully next week! In the meantime, we thought we’d share the details on four of those crossed out projects from above, sort of like a Weekly Crafty x 4, if you will. 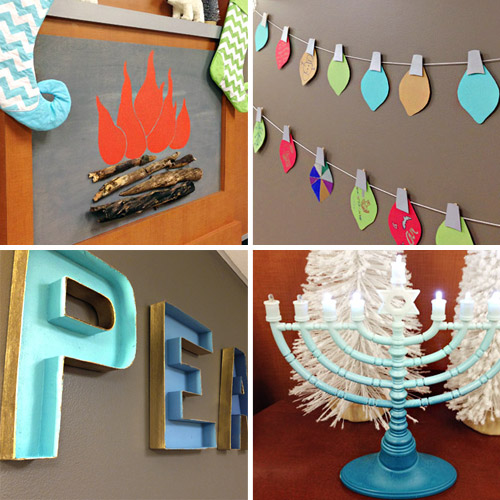 The first one’s our little faux fireplace, complete with a holiday mantel. Here’s a shot of what it looked like before the walls even got painted. 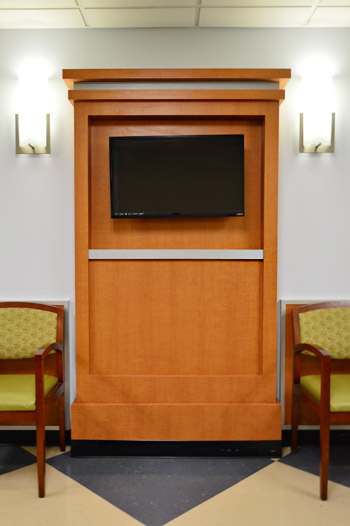 We made a case for painting the corporate looking wood paneling with metal borders that runs around the room (along with the wood TV surround) in a glossy white tone, just to make the room look more cozy and home-like, but for durability and maintenance reasons it has to stay as is. The good news is that the new wall color looks awesome, so we decided to just embrace the wood TV center and focus on layering in some warm holiday touches.

The recessed panel below the flat screen seemed to be begging for a fireplace, and since a real fireplace is crazy talk (it totally wouldn’t meet their code requirements) we opted to make them a fun faux one instead. The first step was getting a thin plywood board cut to size at Home Depot that we took home and stained gray with a small pot of stain (also from Home Depot). 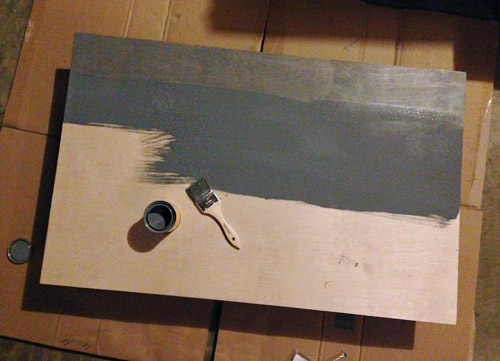 Our original plan was to just paint some wood and a fire on it, but I got the harebrained idea to incorporate real wood instead. I scavenged in the woods behind our house a bit and then ripped the fallen branches in half on my table saw. That way there was a flat side to rest against the plywood. 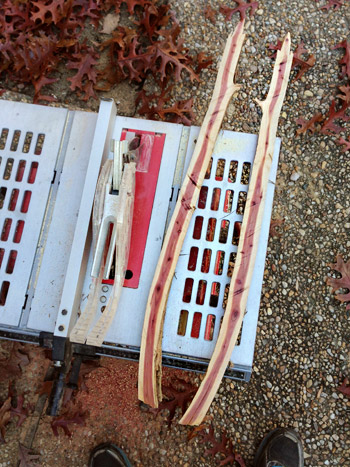 After playing around with a few halved-logs, I found an arrangement that sort of mimicked the look of stacked logs. So after letting them dry out and then sealing them with a few coats of spray poly on all sides (to make them less crumbly) I glued them in place and, once the glue was dry, I screwed them in from the back – just to be safe. 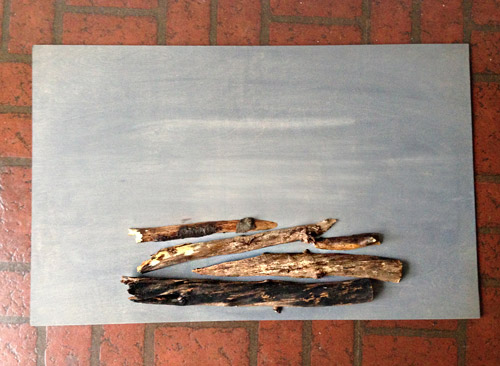 Sherry then used some spare orange paint (Terra Cotta Red by Valspar, which we got with a free sample coupons from Lowe’s) to paint on some flames. 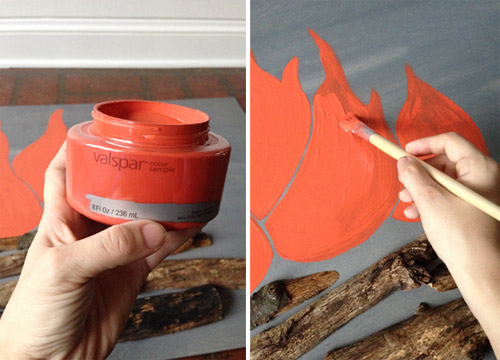 She originally planned to do some red and yellow too, but we both kinda liked how simple and graphic it looked with one color, so she left it as-is. 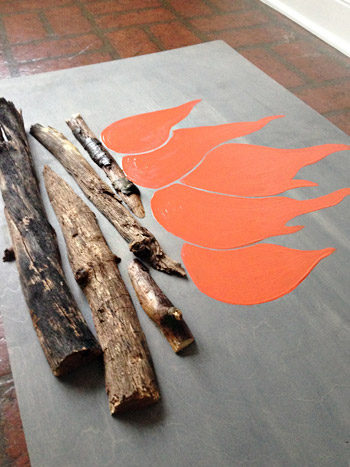 Then I just used 3M Command velcro strips to hold it place in that recessed alcove under the TV (this way it’s 100% removable after the holidays). 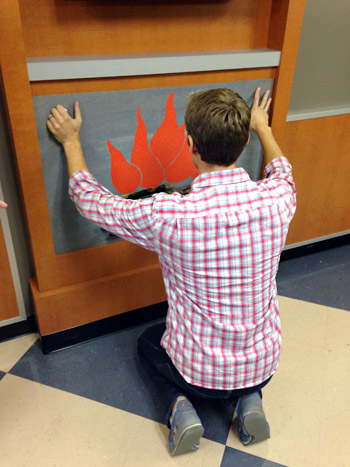 Here’s a detail of the finished faux fireplace, complete with a few “mantle” decorations as well. The chevron stockings were a handmade-with-love donation from a local Etsy shop called Love by Design. Thanks Christen! We’ve already heard that they’re making the kids and families smile, and they’re not even full of presents… 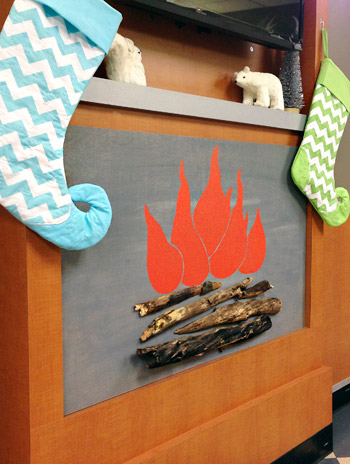 Next to the fireplace is a freshly painted wall with two more projects that we just got to hang. Let’s start with the easy one: our “Christmas lights” paper garland. 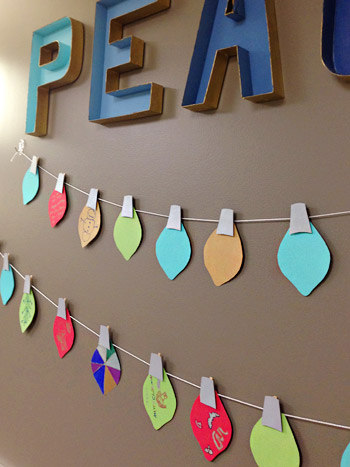 Early on we knew we wanted to do an “interactive” garland where the kids could help us by putting their personal stamp on things, so the obvious solution was paper clipped onto a string like a clothesline (so things could be colored and easily hung up to be displayed). But to give it a little holiday spin, Sherry cut the paper to mimic the shape of those old school big bulb string lights. Then she glued a silver paper “socket” to each one of the clothespins to round out the idea. Now when they’re all clipped into place on the silver twine, they look like little Christmas lights, and can be personalized by kids (and parents) of all ages. 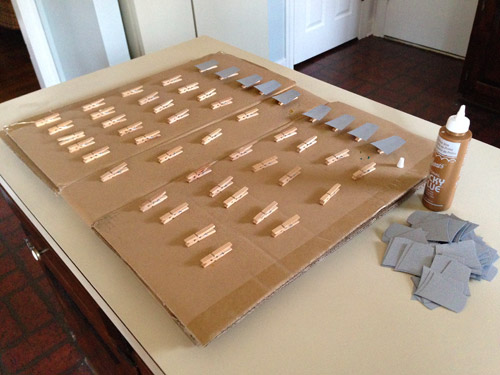 Clara very kindly volunteered to color on a few of the bulbs before we left home, just in case the kids needed a subtle nudge that they’re allowed to go to town on these. But the nudge wasn’t needed. While we were there installing a few things, a 10-year-old girl named Jessie came in with her nurse and colored a bunch of them for us. You can see her self-portrait on the green one below. She’s just about the coolest kid ever. Thanks for getting the garland project started, Jessie! 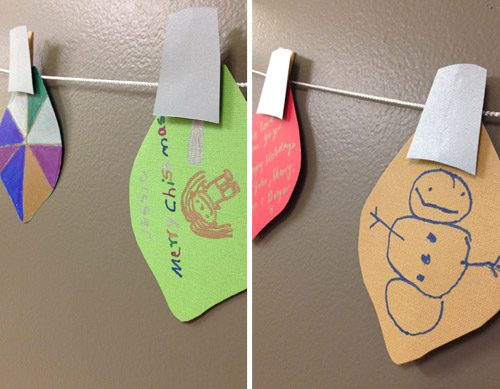 Above the garland is a little lettered “PEACE” sign that we made. It’s a word we’ve been keeping in mind while choosing items for the room since, of all the feelings this holiday season can bring, peace seemed like a good one for a space that you want to be calming and welcoming for all of the families who will be spending their time in this room. The first step was grabbing these cardboard letters from JoAnn fabric. 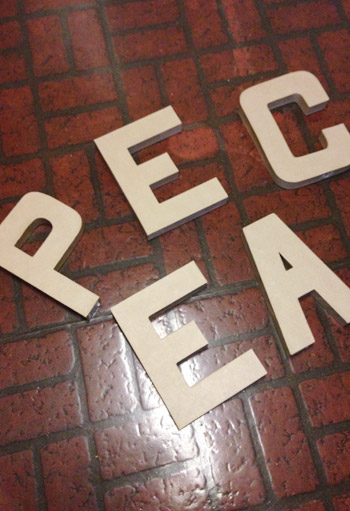 We’d seen some folks on the interweb cut them open before, so we decided to give it a go. I sliced along the top edge of each one (not a quick process, I’ll warn you) and then smoothed things out a bit with a sanding block afterwards. The cardboard didn’t cut super cleanly, so the sanding helped to get rid of some of the raggedness. 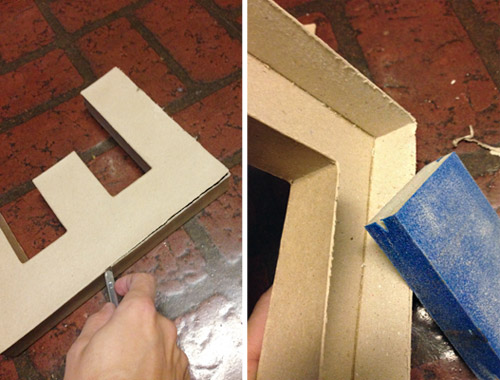 Here’s the scene after my cutting and sanding spree. 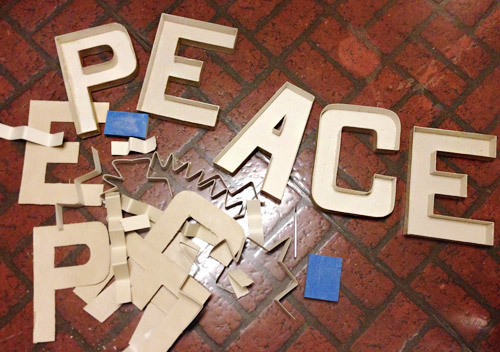 Once cut, Sherry took them outside and gave them a coat of gold spray paint (still leftover from our book photoshoots, wouldn’t you know). She focused her spraying mostly on the edges, because we had other plans for the inside: a colorful gradient from turquoise to dark navy. Since we had a few shades of blue craft paint around it was pretty easy to achieve the range of colors. 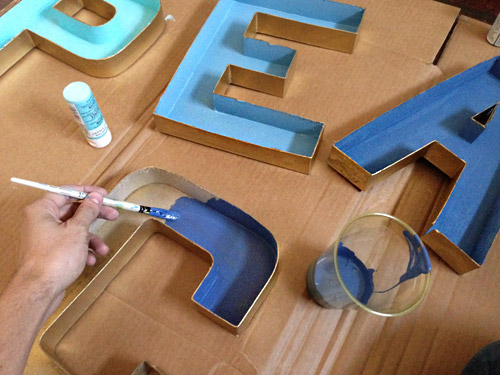 It wasn’t until after we were done that we realized they kind of resembled old metal letters. Somewhere between the metallic spray paint and the still sightly rough edge, it gave them a bit of a rusted, vintage look. It was awesome to see people reaching out to touch them, thinking they were made of something heavy and then realizing they’re just painted cardboard. 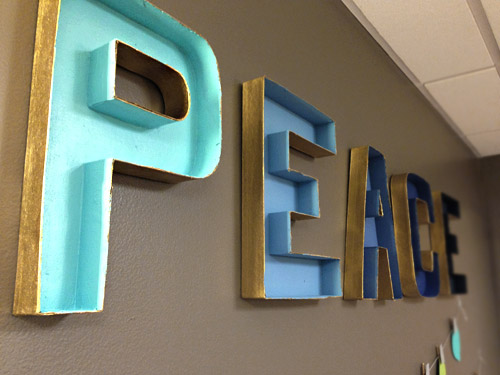 And speaking of blue gradients, Sherry decided to carry that theme over to the Menorah that we brought into the room, which was inspired by the gradient candles that were in her original moodboard’s menorah candles. Thank goodness we got it into the room with a few days of Hanukkah still left (it went in on Tuesday)! 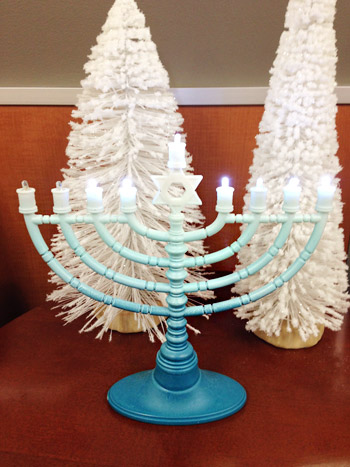 For this little upgrade, we found a regular white menorah at Party City, and Sherry bought two cans of spray paint for that graduated effect. The first one was a dark blue color that she applied around the base on all sides (Lagoon by Rust-oleum) and then some aqua got sprayed through the middle portion on all sides (Blue Ocean Breeze by Krylon). She simply left the original white color along the top, and it probably took ten minutes total. 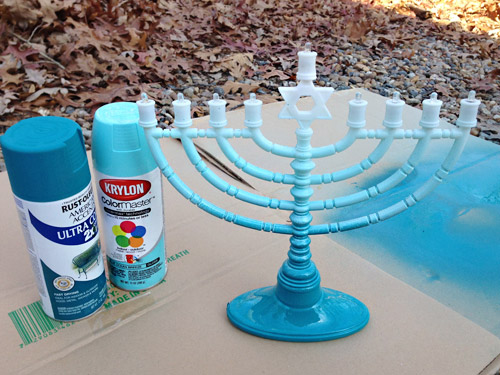 So there are four little holiday updates that we’ve completed for anyone who has been wondering what we’ve been up to in there. Now we’ve moved onto the rest of the projects on our to-do list that are still not crossed off – one of which will feature the messages, cards, and other well-wishes that a bunch of you have sent our way (thank you, THANK YOU!). Which reminds me: there’s still time to mail a note / drawing / paper snowflake / whatever for us to include for the kids and their families – just to lift their spirits if they’re spending the holidays in the hospital. So feel free to send those to P.O. Box 36665, Richmond, VA 23235. Be sure to note your name and location somewhere on your card/snowflake/creation/drawing (i.e. “From The Costellos in Berkeley, CA”) so people can see just how far and wide these well-wishes are coming from.

And if snail mail isn’t your thing, the Children’s Hospital also has high-tech ways for you to get involved in their #SpreadCheer project if you so desire. You can post a 6-word pledge online for how you’re spreading cheer this season to help raise their “Cheer-o-meter” (that’s 100% free, and only takes a few minutes) and they’re also taking $10 donations via text. 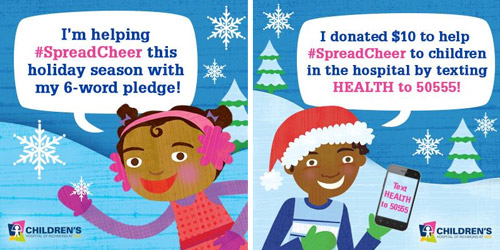 We’ll be finishing up next week (exciting bigger things will be coming in, like our cozy armchair, the window treatments, some bigger wall items, etc) and then they’re actually editing a short video of the makeover along with some Sherry’s-already-crying-just-thinking-about-it reactions from the sweet families who are spending their time in the room. We can’t wait to share that stuff with you guys as soon as we can!

Decorations and makeover aside, I have to quickly say what a humbling experience this has been. Maybe between now and the next post I’ll find the right words to express exactly what I mean – but witnessing what the staff at the CHoR does is pretty incredible. To get even small glimpses of the heart-wrenching stuff they encounter every day has been pretty eye-opening… and it really puts the idea of stressing over decorations and holiday entertaining into perspective. So in case we forget to say it later, a big thank you to anyone who does a tough job like that and makes such an amazing difference for so many families who are dealing with some very heavy stuff. We’re grateful there are folks like you in the world.