To everyone who has been asking about Teddy’s birth story, thanks for your patience. I like to let those things simmer a little while before I write about them (Clara’s took me almost a year thanks to all of the mixed emotions I had going on) but Teddy’s birth was a lot less scary and a lot more straightforward. Thank goodness! After going through such a traumatic first birth, nothing sounded better to me than a completely routine, scheduled, no-surprises-at-all delivery this time around – which it mostly was, for which I’m SO GRATEFUL. There were still a few surprises, but the primary challenge of this birth (and the whole pregnancy process) was fending off the worries, fear, and worst-case scenarios that my last experience had cemented so vividly in my head. In some ways, Teddy’s birthday was like the culmination of four years worth of emotions. 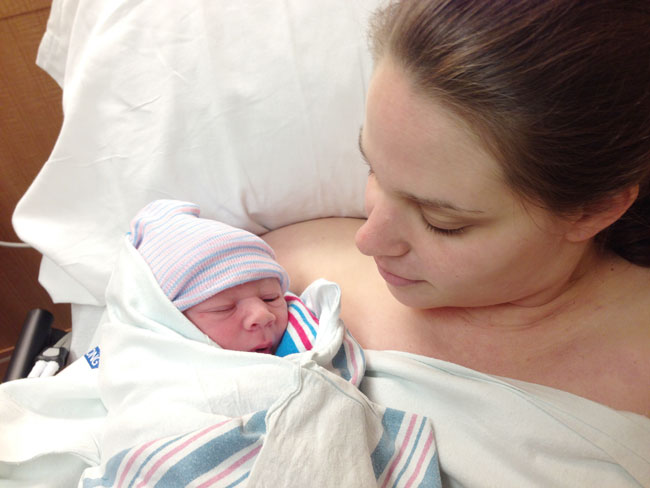 I had a scheduled C-section this time around, just due to the dangers of going into labor for myself and Teddy (that’s what triggered my placental abruption with Clara) so while it felt sort of weird to know his birthday ahead of time, it was the kind of information my brain embraced. I felt so out of control with Clara’s birth that I was happy to cling to any and all “constants” this time around.

April 16th was the day, and it came without any false (or real) labor scares beforehand. That alone was a huge blessing. We had to be at the hospital around 6:30 am, so we left Clara at home with the grandparents and off we went. It definitely felt weird to drive to the hospital without any contractions (on my way there with Clara I had been in a lot of pain). In some ways the calmness was nice (no pain is a good thing! who complains about no pain?!) but in other ways it gave space for the worries to start creeping in. The last time I was in the hospital having a baby, everything was fine… until it wasn’t. So that whole it-came-out-of-nowhere thing was lurking in my head.

When we got there, they were quick to get me into a gown and then came the IV. I joked with the lady that I have the worst veins ever and it usually takes a few tries. She smiled and gave it a go. Yup, that vein of mine wouldn’t cooperate. So it took three tries by three different people – the last one being an anesthesiologist who had to numb my hand before digging around to find the right spot. Apparently since I had been banned from eating or drinking that morning I was especially dehydrated, which made my usually-stubborn veins even harder to hit. 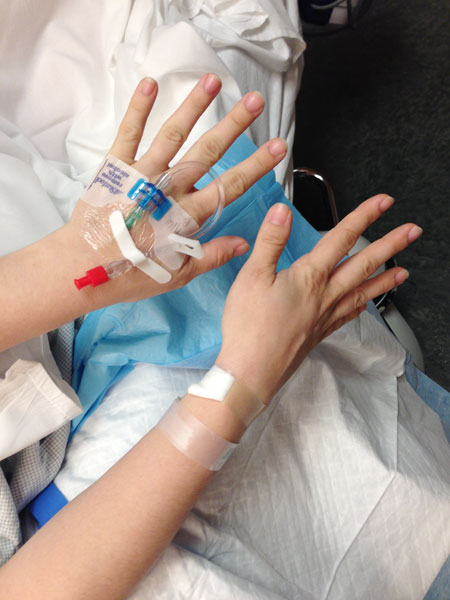 But the little IV challenge was good. It kept my mind busy so I wasn’t just laying there freaking out. There was a monitor on my belly the whole time, which was reassuring, and the anesthesiologist was hilarious so we were all just chatting and having a good time. We learned his daughter had just slept through the night for the first time, so he said he was in a great mood and it was a going to be a great day. Before long it was time for the epidural, which meant that I would be wheeled alone into the operating room and John could join me after it was in. 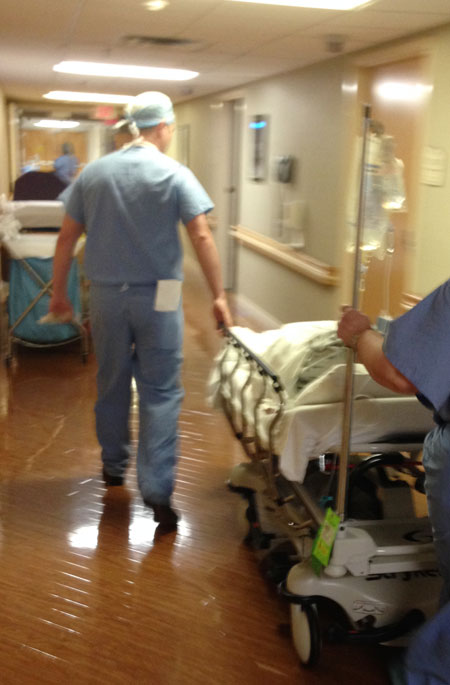 I know it sounds completely crazy, but John and I were separated during my emergency c-section for a little while (he was right outside the OR and I was inside) so as they wheeled me down the halls I had a nice little panic attack. It felt like my chest caved in and I couldn’t breathe. After I realized I actually could breathe I was mostly just embarrassed. “Get it together, this is an awesome day” I repeated in my head.

Once inside the operating room, they had me sit up and curl my back so they could get the epidural in. This is when the mood got a little lighter again, because just like my stubborn veins, apparently my spine was being stubborn, so it took a bunch of attempts to get it in correctly (at one point I felt something dripping down my back and asked if it was blood – turns out it was spinal fluid). That might sound gross to you, but I LOVE that stuff, so it once again kept my mind nice and busy (no way! spinal fluid?!). Soon enough the epidural was in, and I was laid down and lifted to the operating table. And then I looked up.

SAME ROOM. I was in the same room that I had been in when Clara came into the world not making a sound. I’d recognize that ceiling anywhere. I had stared at it for what felt like forever while willing Clara to cry. It hit me so hard. I later learned that John was outside making the same realization. Same hallway. Same door. Just standing there again, nervously wondering what was going on inside. 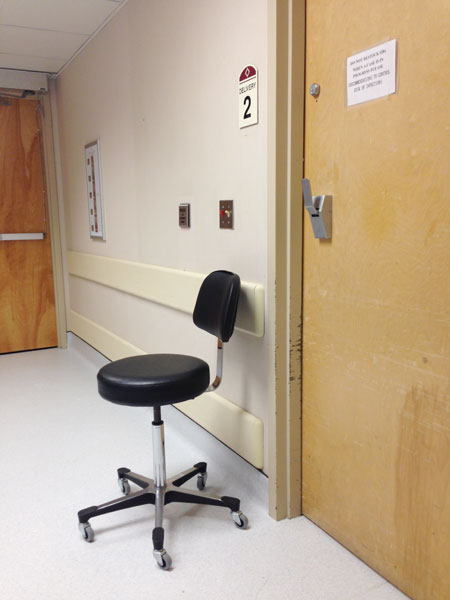 But as soon as they got me laid down on the table, John was allowed in. He grabbed my hand and everything was ok. Suddenly I felt a rush of excitement. We were going to meet our little boy! I might have squeezed John’s hand too hard, but he didn’t complain. I didn’t even know he took this picture (my eyes were squeezed shut a lot of the time) but I loved discovering it on his phone a few days later. He said we missed so many photos during the frenzy of Clara’s birth (we hardly have any at all) that he wanted to make up for it this time. 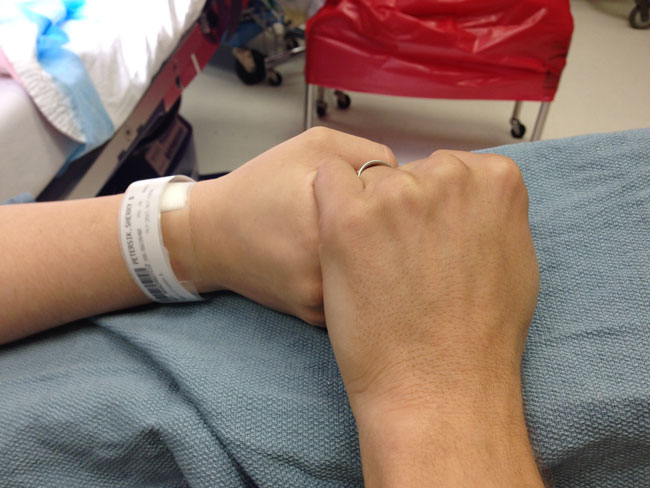 Maybe ten or fifteen minutes passed and the doctor said “he has so much hair!” and “he’s so big!” and “oh my gosh, his kicks are so strong!” I remember saying something like “why isn’t he crying?!” because that is literally all I wanted to hear, and she laughed and said “he’s still inside, I’m getting him out right now” and then he started wailing. It was amazing. I’m welling up just thinking about it. It was the greatest release. He was out! He was crying!

They brought him over to me to do skin to skin a few seconds later, which felt so good. He was just laying there breathing, occasionally opening his eyes just a sliver to peek at me. 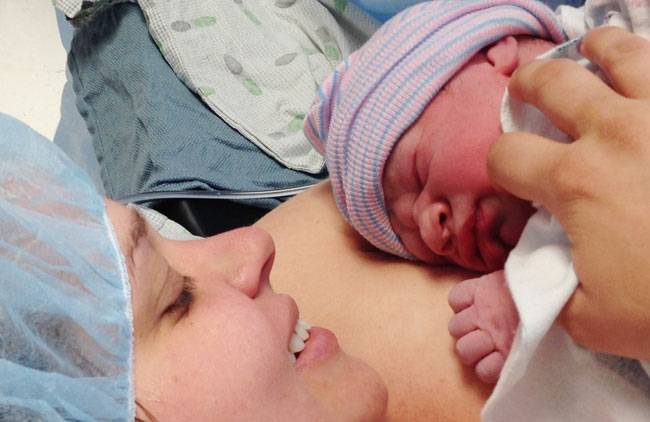 John and I blinked back tears and studied him. He was so close to my face I could see every little hair and freckle. We had a good laugh over the tiny baby hairs on his shoulder. Our little werewolf, we joked. They took him over to get cleaned up, weighed, and measured and he started crying again. John and I were both still just laughing and crying. It was one of the best feelings ever.

There was some excessive bleeding on my end (apparently my uterus wouldn’t clamp down, so they had to give me a shot of pitocin to get it under control), but thankfully that worked and I didn’t need any blood transfusions or anything. After I was all stitched up, I got to nurse Teddy. I just laid there, soaking up every detail of his tiny face. I looked up and saw John’s eyes getting teary again. I know healthy babies come into the world every day, but it felt like a gigantic miracle to us. 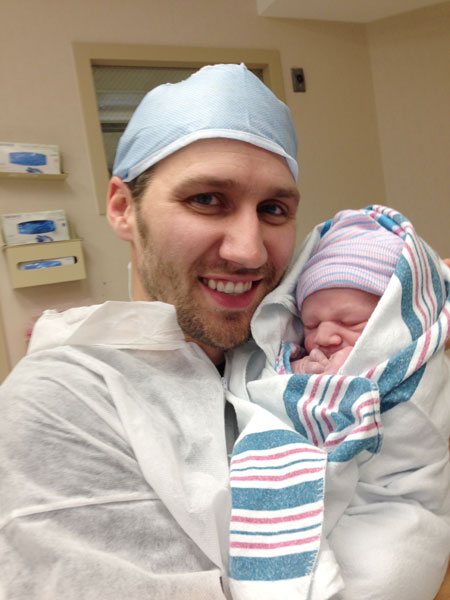 After we were settled in our permanent room, we got to introduce him to John’s parents, my mom, and Clara. And just when I thought my heart couldn’t burst any more, seeing Clara gently pet his head and asking to climb into bed with me and Teddy – well, I almost can’t explain the euphoria. I am so grateful to the amazing people who helped us get both of our kids safely into the world and cared for me throughout this pregnancy. 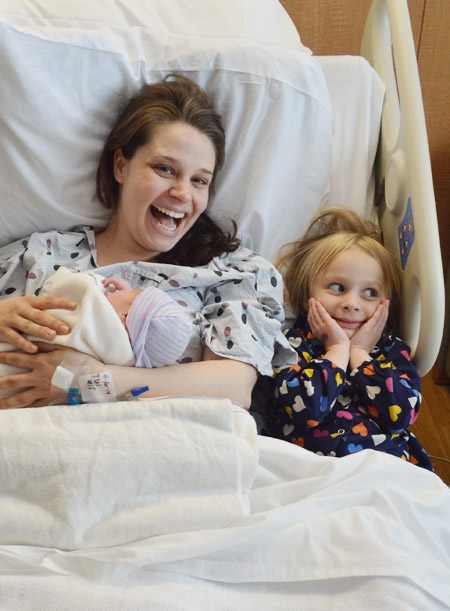 As for my second c-section recovery, it seemed a lot easier this time. I had a lot more trauma/blood loss the first time, and even my incision was smaller this time around, so I was up moving around in the hospital by the next day (I even got a morning shower!) and was off pain pills by the time I was back at home. One tip to other c-section mommas out there is that I LOVED the abdominal binder the hospital provided after I had Clara (I brought it with me and used it again after Teddy). It’s this wide white band that you velcro around your waist and it just seems to hold everything together.

You know how it hurts to laugh or sneeze after a c-section, so you brace yourself against a pillow? Well, the abdominal binder is like constantly being braced, so those things don’t hurt as much. And instead of walking around all hunched over, it helped me stand up straight and move around with less pain (I wore mine until about four weeks postpartum). I assumed everyone got one, but when I mentioned it randomly on an instagram comment about a week after Teddy’s birth, I heard from so many moms who hadn’t heard of them so I wanted to pass that tip along in case it helps. I’m sure most hospitals have them if you ask, and it made such a difference for me both times.

Weird abdominal binder sidebar aside, I wanted to thank you guys so much for the love and support you shared throughout this pregnancy and during the birth. 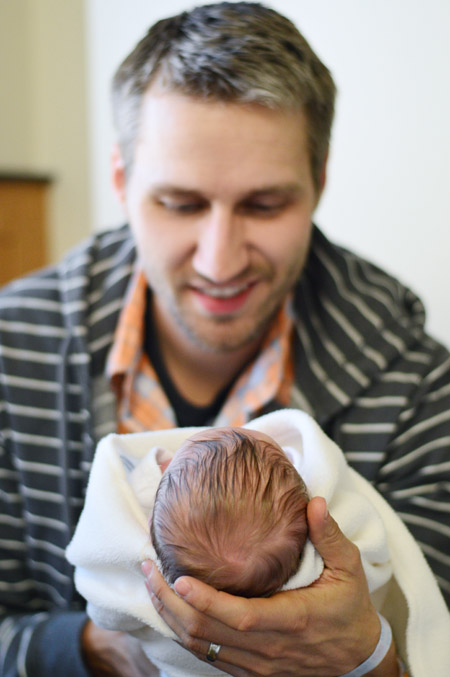 I can’t explain how comforting it was to have your well wishes and support during such an emotion-filled time. Big wet kisses to all of you. Also, I think Teddy has a present in his diaper for you. Oh wait, that’s for John ;) 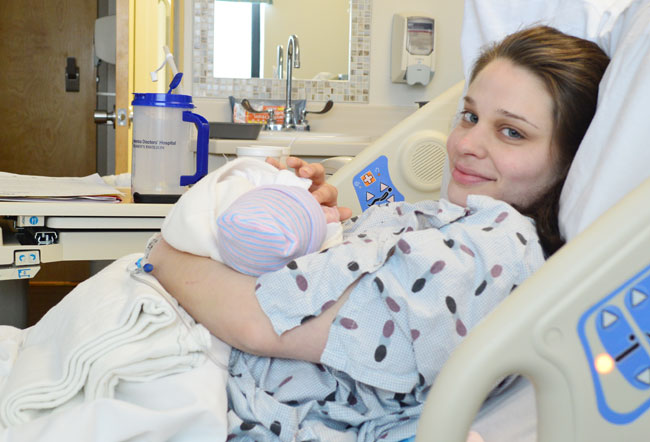 One more thing. How is my baby boy this big already?! INSANITY! 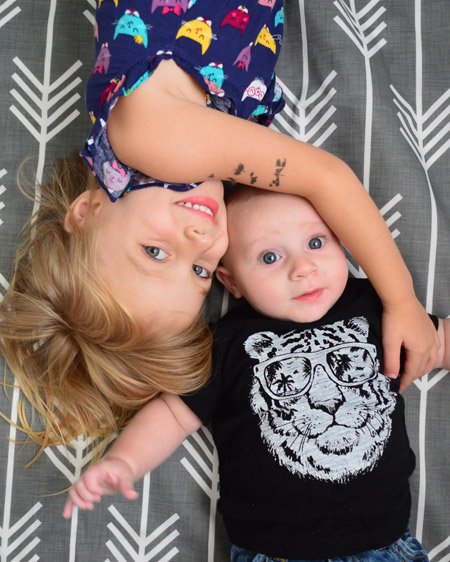 How To Install A Marble Herringbone Tile Backsplash In The Laundry Room
Fab Freebie: Wave Fair-well To Summer