Surprise! This was the scene at our house yesterday: 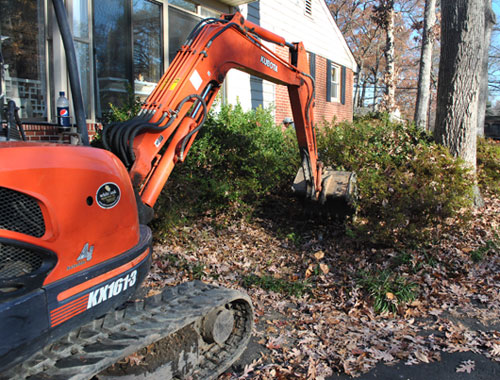 Allow me to explain. We decided to test the soil around our home’s underground oil tank (we have oil heat) a few weeks back to assure any interested buyer that it’s in tip top shape. Much to our horror, it wasn’t. Soil tests came back indicating that we had a small leak. We felt like somebody punched us in the face. Here we are with our rain barrel and our compost bin along with all of our energy star appliances and our cloth diapers in an effort to be green while our oil tank has been oozing nastiness underground without our knowledge. Shudder.

Luckily we learned that it’s something that the Virginia Department of Environmental Quality feels so strongly about fixing that they actually offer a credit to homeowners in our situation, so we only had to pay a $500 deductible for the removal of the old leaky underground tank (and the gross oil-riddled soil around it – hence the excavator pictured above) while the government covers the rest of the usually-around-$2,000 project. Nice right? But we did have to kick in about $1300 to install a new above ground tank (which will never secretly leak since it’ll be visible instead of buried). The good news is that it’s kind of like we’re paying it forward since we’re leaving a new tank for our home’s next owners and our new house actually also just got a new above ground tank (so we’ll inherit one that’s just as new and shiny). Ain’t she pretty all tucked quietly behind our azalea bushes? 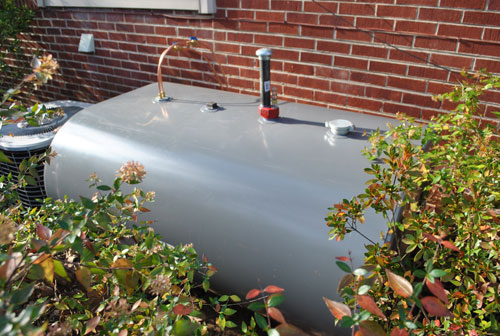 Especially when you compare her to ol’ Rusty. They estimated that our tank was about 30 years old after unearthing it. Here’s hoping 30 is kinder to me when I hit it next year. 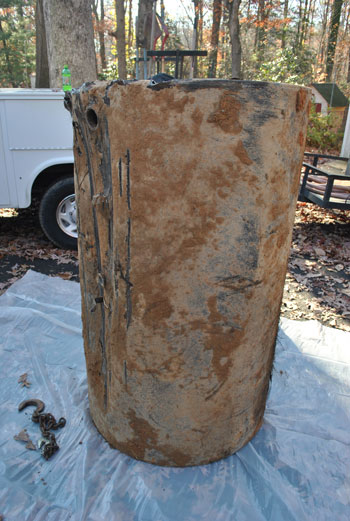 The funny thing is that as gross as that sucker looks, they could only find this dime-sized hole at the bottom (though they said others might be too dirt-clogged to see). 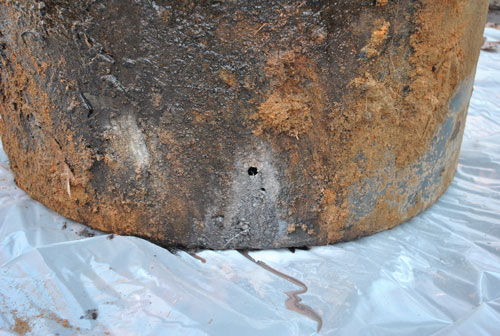 The good news of the whole oil-leakage incident is that since oil doesn’t move very much through compacted dirt like ours, it’s not believed to have traveled very far underground. So the Virginia DEQ just requires the removal of the tank and a bit of surrounding soil to rectify the situation. Okay, maybe a “bit of soil” is an understatement. This was the hole they dug: 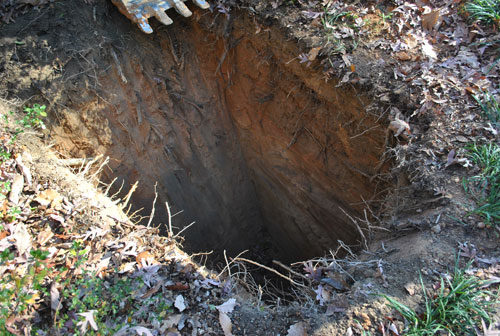 They had to dig up two azalea bushes to make that hole but luckily the process didn’t disturb the driveway or any large trees. And they replanted the pristinely removed azaleas after filling the gorge with gravel and topsoil (though they were the first to say that they make no guarantees about their future survival). Cross your fingers, I guess?

Even though it’s bittersweet to have sunk money into unsinking this leaky tank for our buyers (yay environment, boo spending) we’re definitely comforted by the fact that we’re getting a new shiny tank at our new house (how funny is it that the current owners ran into a similar situation with their underground tank and just upgraded to an above ground version too?). So I guess we could call it good house karma paying off. If you can count following government orders as karma.

Have you guys had oil issues? Or other appallingly ungreen discoveries in general? Nothing like a little unplanned spending around the holidays to get your blood pumping.

Psst- Holy amazingness. Check out this sweet DIY play kitchen that was made from an old TV unit over on BabyCenter.