I’d like to say we strategically planned to buy all of our beach house appliances (besides the pink stove, that is) during Black Friday sale season. But really, it was just some lucky timing. Timing so lucky that it saved us over $1350, in fact! The appliances won’t arrive until after Thanksgiving, but in case you wanted to snag some of the same deals, we’re sharing what we chose, how we saved, and why a last-minute floor plan change helped us get even more for less. 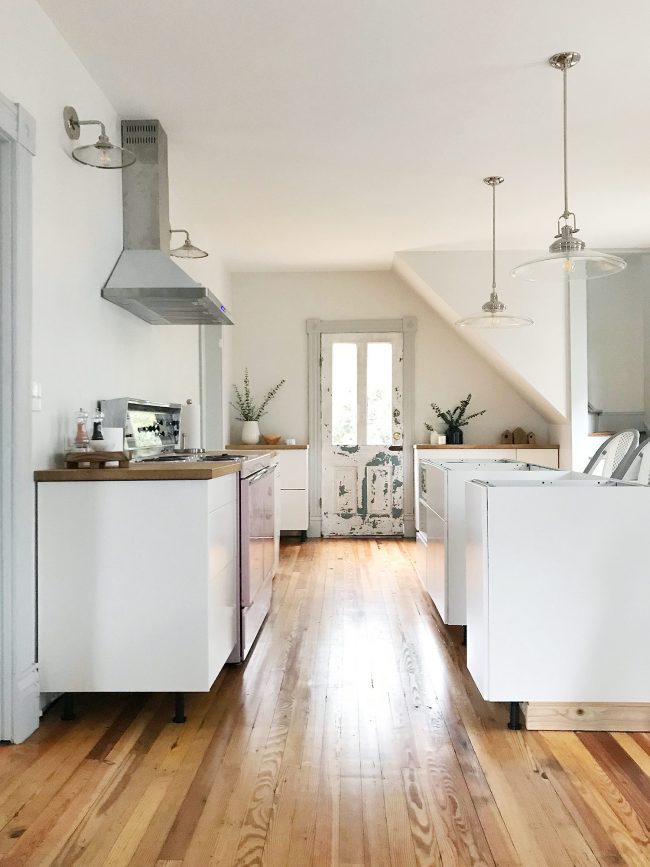 Let’s first talk about our change of plans. If you remember this post about planning our kitchen, we had been thinking about purchasing this fridge to go along the same wall as the stove. There were very few white fridges that fit the small area we had, so it was almost a given – but our gut told us to wait on purchasing it until the kitchen started to come together more. 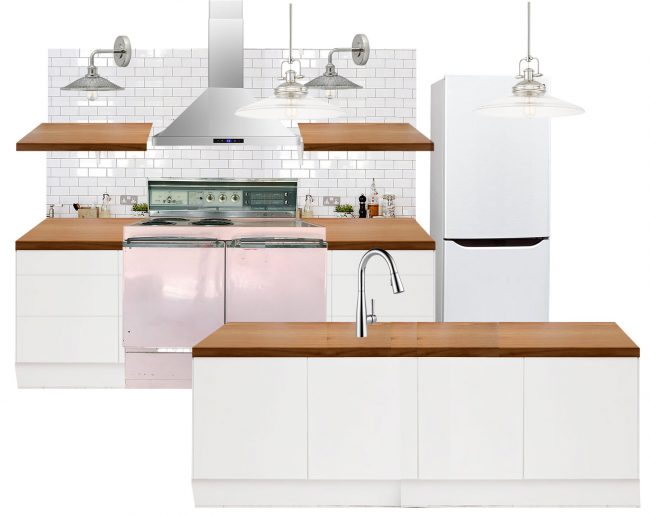 It’s a good thing we did because as we started building cabinets, Sherry’s biggest fear about that fridge started to materialize, thanks to this cardboard mockup that we made out of our island stool boxes (I’m pretty sure if Serena & Lily made a refrigerator though, Sherry would want it – It’d probably be all inlay or capiz). 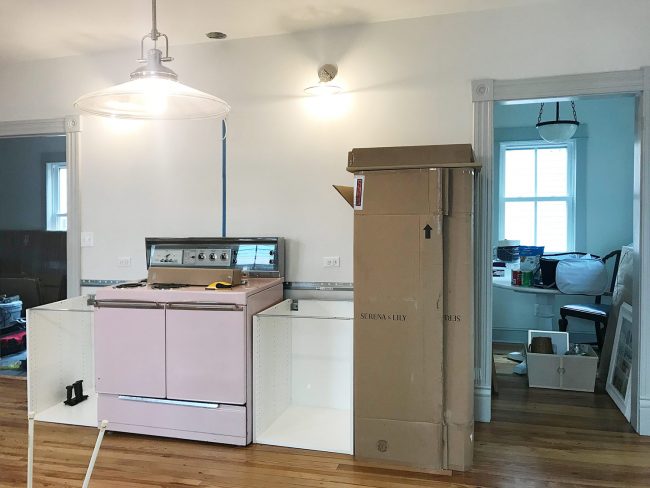 Anyways, the issue is hard to see in the photo above. Sure, it cramps the door molding a bit more than we’d like, but our main gripe was that it was such an obnoxious visual obstruction from this other view below – which would be seen every single time anyone walks into the room from the living room or the foyer. I’m sure part of the problem is that we’ve just grown accustomed to how open everything has been for months, but we (especially Sherry, who jokes that her tombstone could someday read “Lover Of Balance And Sight Lines”) weren’t loving how the future fridge would encroach on the view of the back door and the door to breakfast nook. 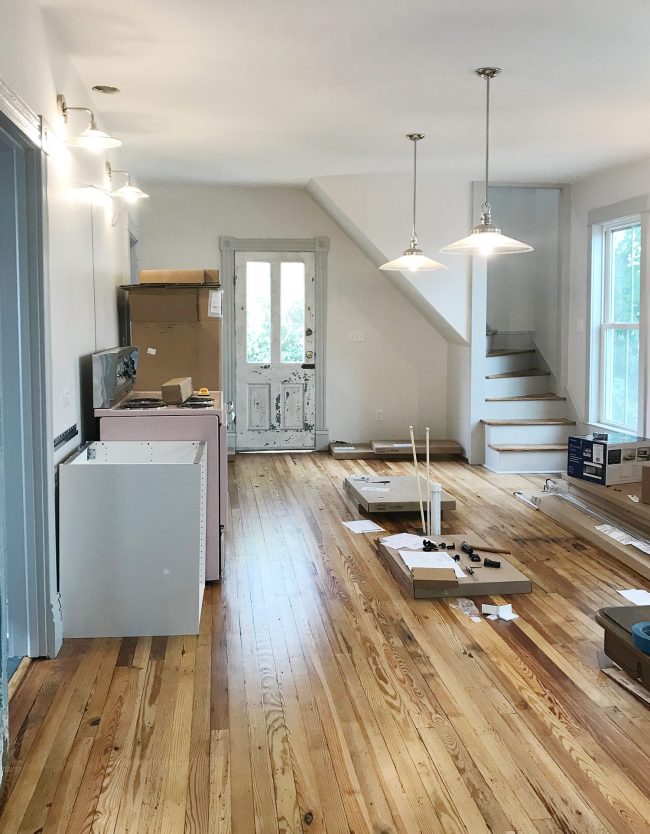 We considered moving the fridge to the back wall between the two doorways, but it was even more cramped looking back here. Sidenote: the plumber included a water line in his standard package, even though the fridge we were planning to buy didn’t have an ice maker, so that’s why you see that there. 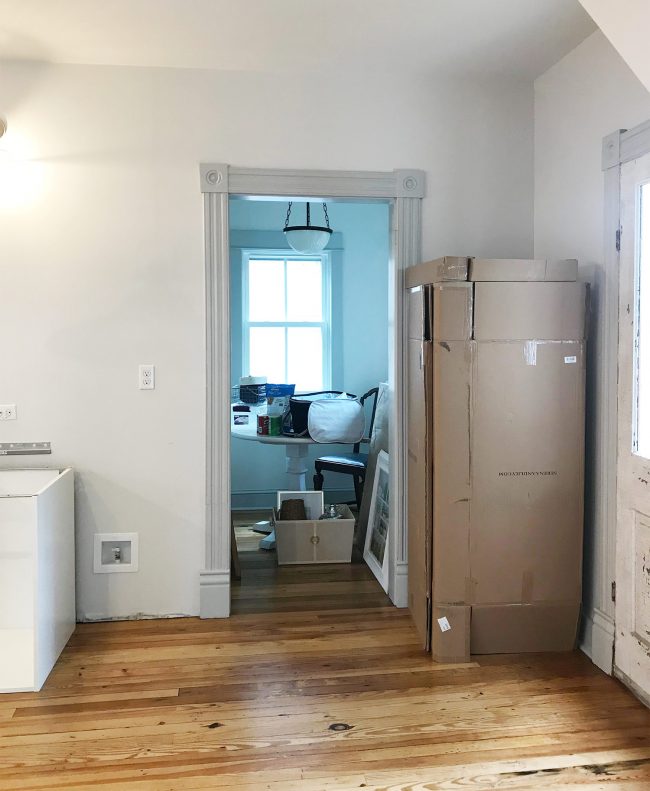 So after much debate, we came to the conclusion that we shared in our last update: we’re gonna turn the breakfast nook into a walk-in pantry, and the fridge will go in there.

It’s hard to tell in photos, but you can kinda see in this one from a few weeks ago (before we had the light fixture correctly centered) that it would be a somewhat cramped breakfast nook. Even with just a placeholder table and chairs, it wasn’t very comfortable to move around in. Plus, with seating for 4 people at the island and 6-8 people at the dining table, it was starting to feel like overkill (keep in mind that this house will most likely sleep 8 people, and we’ll have already seating for 12 people without a breakfast nook). 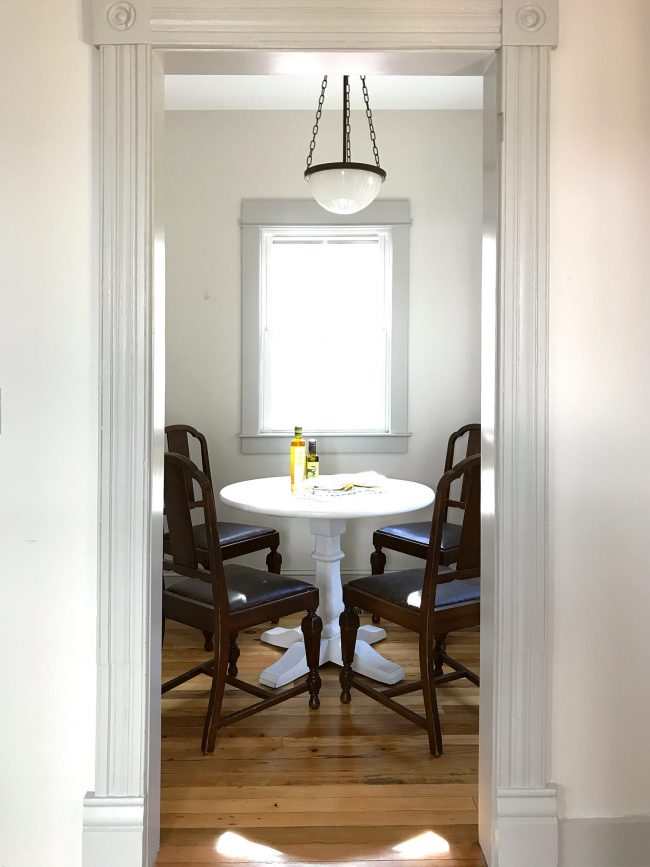 The decision to turn that nook into a pantry immediately felt like a HUGE functional improvement to the first floor. We’ll have plenty more space for the dry goods that people bring to the beach (cereal boxes, bags of chips, those comically large barrels of pretzels, etc) plus we gain a spot for people to store their coolers. We’re also debating moving the microwave in there instead of having it in the island, which earns us one more deep drawer in the kitchen for more storage (we only have 8 kitchen cabinets, so we want to make the most of them). Plus we can fit a larger fridge in there too. All good things!

But I still was pretty insistent on using that sliver of wall space for refrigerating frequently used items. This means things like milk, OJ, eggs, etc can be within reach of the prep areas while the full-sized fridge will be just a few steps away in the pantry. That idea led us to this vintage-inspired mini-fridge from Amazon that jives well with our stove AND won’t visually interfere with any sight lines. Plus, it was MUCH cheaper than a lot of the other retro style fridges out there. 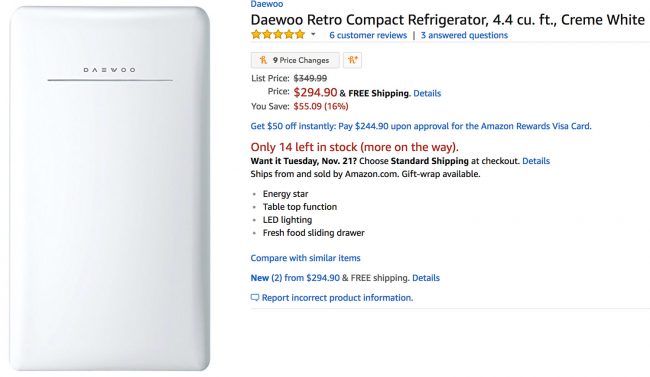 It arrived last week so we got to plug it in and everything (I had an ice cold Coke and it was glorious – sayonara Aquatober!). Don’t mind the big black hole in the wall below. We had to move the old fridge outlet lower to be hidden by the smaller fridge, so we still need to patch that. And of course baseboards are missing on both sides, so it’ll look a lot more finished eventually (still need to add a backsplash and our open shelves too). 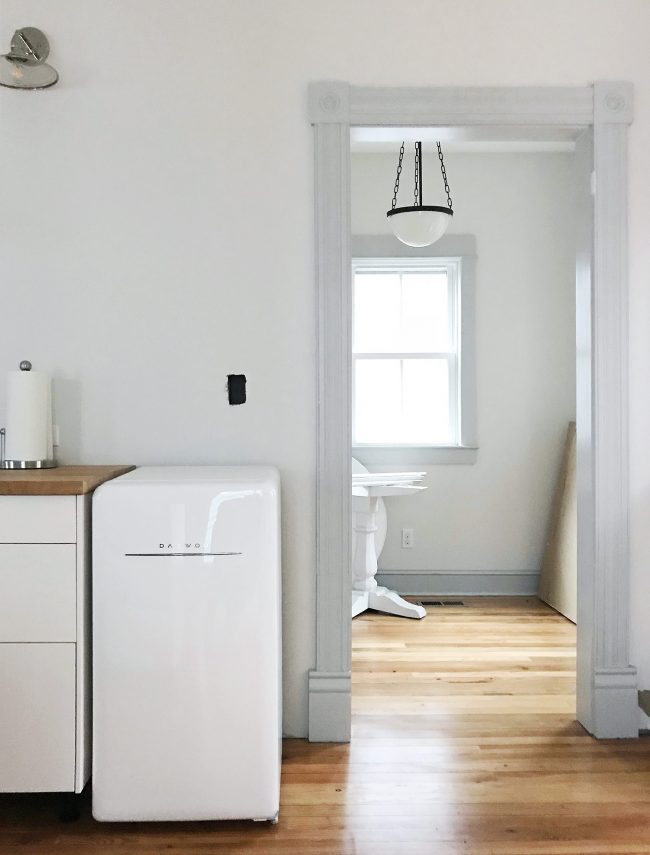 But now let’s talk about the rest of the appliances. We still needed a washer & dryer for the mudroom, a dishwasher for the island, and that larger fridge for the pantry.  So we hit up Home Depot last week to hunt down some early Black Friday deals (oddly enough a ton of them are running already). We quickly zeroed in on this Maytag Bravos XL top-loading washer and electric dryer set. 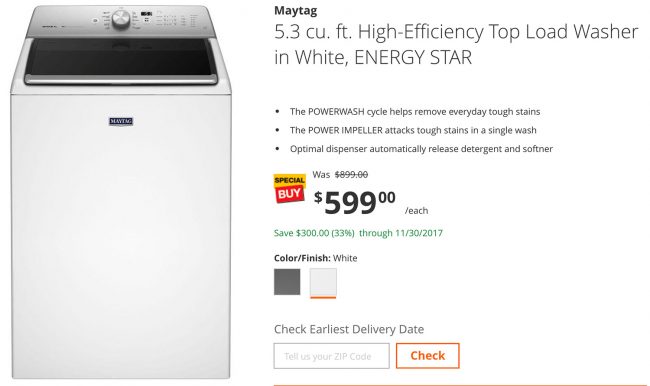 Picking these was easy for a few reasons:

We actually got HIGHER CAPACITY laundry appliances than what we have here at home for LESS MONEY (those were $799 marked down to $651). We figure the extra room (about 1 cubic foot each) will be helpful at a beach house since they’ll mainly be used for towels and bedding. 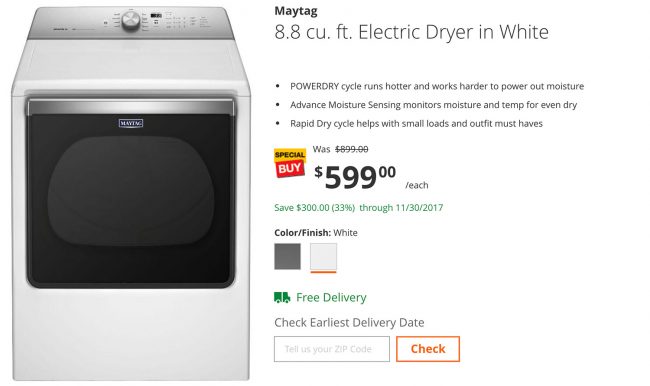 The dishwasher was a little more challenging to select because we wanted white (so it would blend in with the cabinets, leaving the pink stove as the only accent). But oddly enough, these days stainless steel is easier to come by and in some cases – including ours – the white was actually a bit more expensive than the stainless steel version, which still shocks me.

We landed on this Frigidaire Gallery dishwasher since we had a similar Frigidaire Gallery one in our last house. We liked the inconspicuous top-controls and the blends-right-in white toekick on this model (often those are black). It was $499 at Home Depot, but I realized in writing this post that it was $50 cheaper at both Lowe’s and Best Buy, so on our way out to the beach house this weekend, I ran into Home Depot and they price adjusted it to match, so we got it for $449! 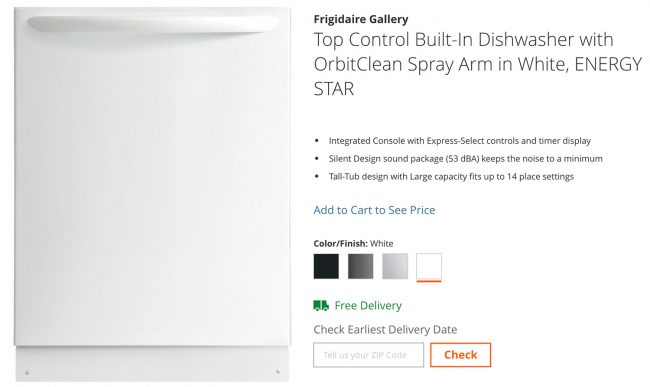 Finding a fridge was the toughest part. The breakfast nook-turned-pantry is still a challenging room for a fridge because of the windows & doorway. Basically, we don’t have any wall that can accommodate a fridge any deeper than 28″ (most counter-depth fridges start around 30″). But after some hunting, we stumbled upon this “apartment-sized” refrigerator by Haier. We’d never heard of the brand, but it’s made by GE and has really good reviews. One person even said something like “we got this for our beach house and love it!” Pretty sure that’s a sign. Since it’s not going in the main kitchen area, we don’t mind that it’s not white. Plus, it’s marked down OVER $500, so a $1,200 fridge could be ours for $698! 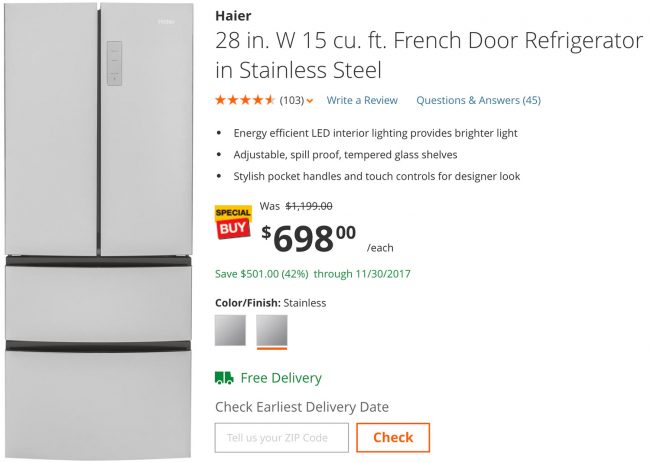 So for anyone who lost track along the way (which includes me), here’s a quick snapshot of what we got (fridge / washer / dryer / dishwasher) and what we saved: 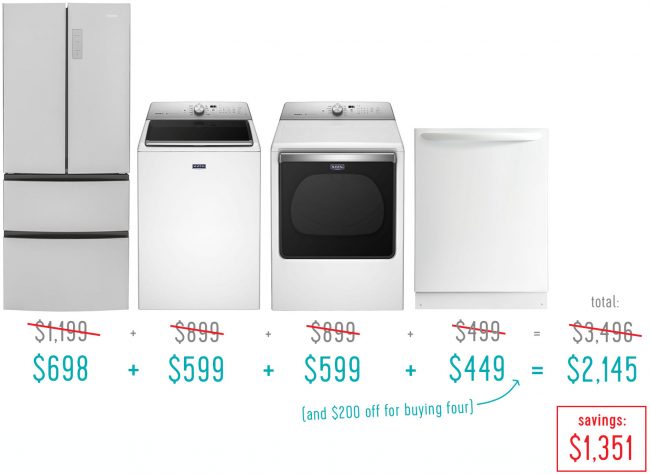 $2,150 is still a big old chunk of change to drop (and that doesn’t include the pink stove, mini fridge, or microwave) but we feel really good about our final selections being brands we’ve already purchased and loved, or machines that have great ratings and should totally do the job for us (we’re looking at you, fridge!). 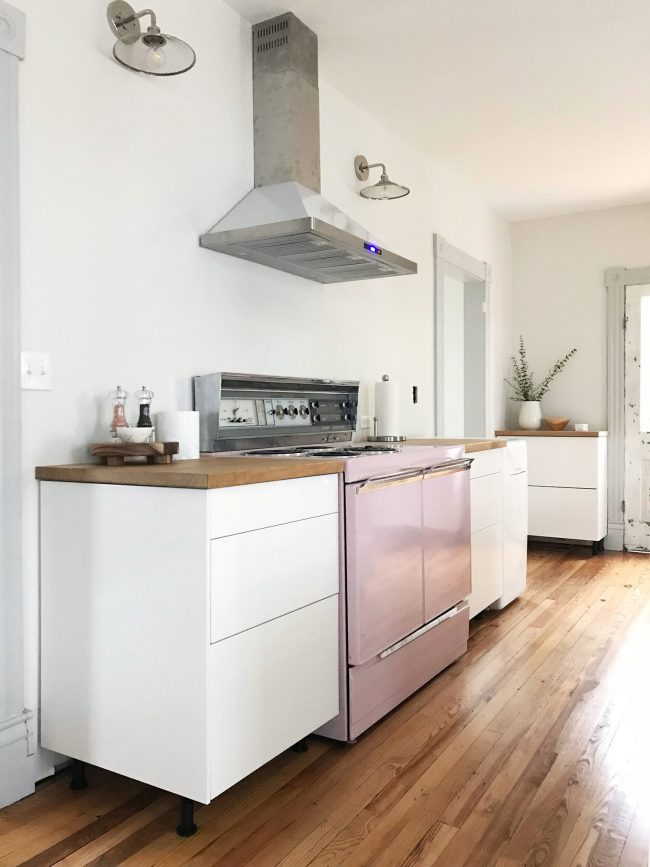 Oh, and speaking of spending money on things that are super functional but not always glamorous, we also hung blinds throughout the entire beach house on Saturday. They’re cordless white faux wood blinds (also from Home Depot – I was getting them cut while Sherry finalized our appliance checkout). 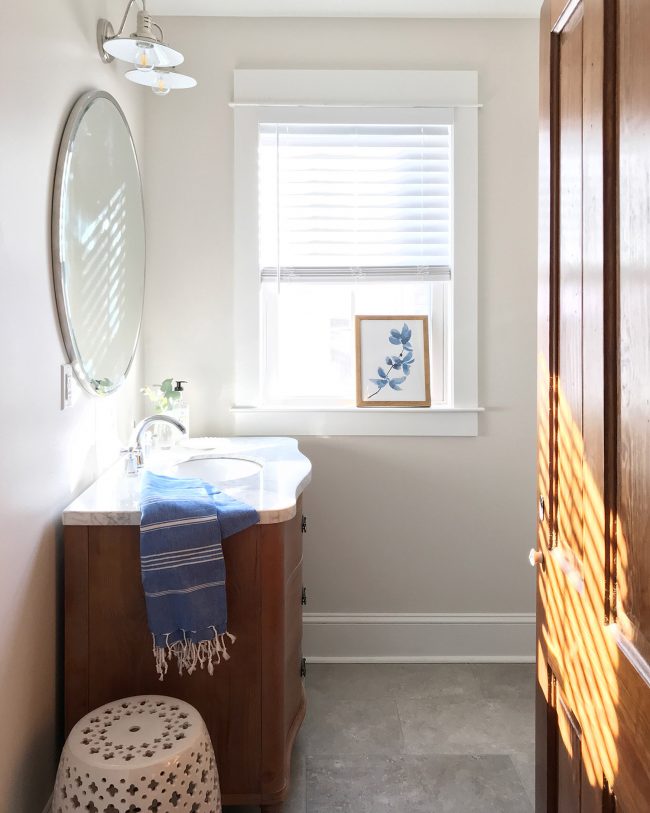 They’re similar to the ones we installed here at home, except that they’re cordless (safer for young renters, plus they look even cleaner without those cords hanging down) so they just raise and lower just by pulling on the bottom. I can’t tell you how nice it was to shower in the bathroom for the first time without my “modesty cardboard” shoved in the windows. 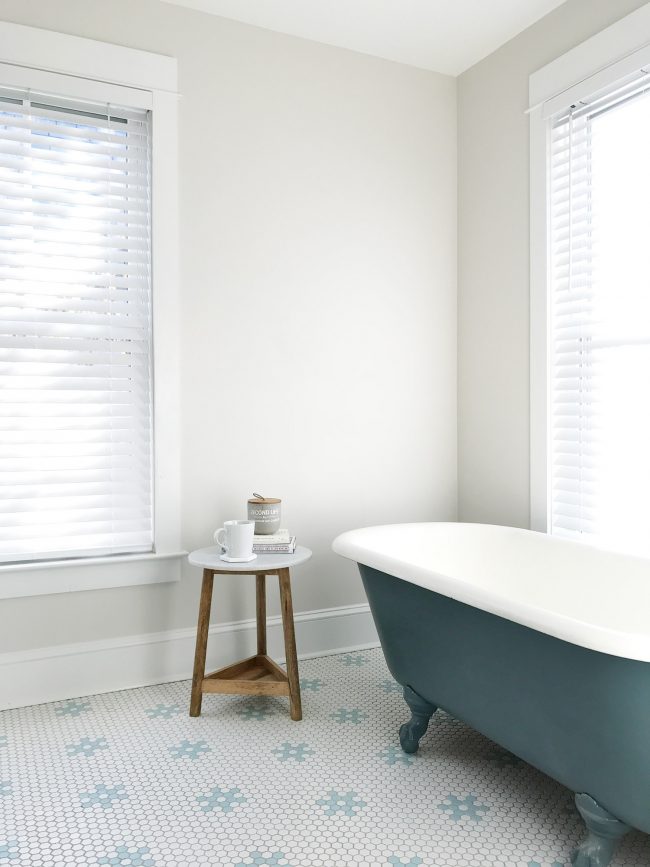 Quick tip for installing a boatload of blinds (we had 29 windows): tag team with one person unpacking and prepping them (snapping the rod in, removing the protective cardboard, etc) and the other person drilling and hanging. I also pre-drilled holes everywhere first so I wasn’t losing time switching my drill bits back-and-forth each time. It still took us about 3 hours, but it could’ve been much worse.

Anyways, Happy Thanksgiving everyone! We’ll give you guys an update after the appliances arrive next week, since we also owe you more about our other big plan-change in the kitchen.

P.S. To read more about how we restored this beach house over the last year, here are all the previous posts about everything from sharing the before shots and floor planning to getting drywall and mad-dash tiling three bathrooms. It’s been quite the ride, guys.

#73: The Secret Power Of Mistakes, Setbacks, And Almost Getting Sued
Living Room Updates, Major Sales, And What I’m Buying