The last four days have been nutzo in Patio Land for us (not to be confused with Temptation Island- remember that show?). The good news is that it’s nearly done. Like 90% done. But since I’m a bit low on energy at the moment (and we have to wait for better light to take more pictures), I’m gonna cover as much of our four-day patio-extravaganza as I can muster. The rest will come a bit later when we’re 100% finished (and have a chance to take about a million after shots from every angle).

To recap: as of last Monday the area was all marked, leveled, and dug up. 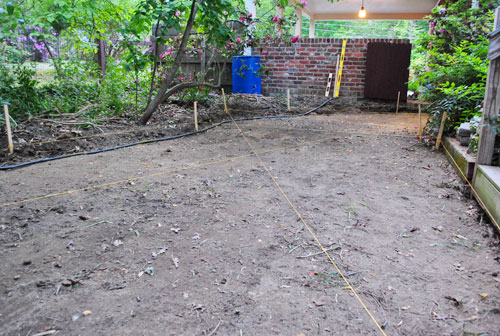 Then on Tuesday our nearly 10-ton delivery arrived via flatbed (300 square foot patios apparently weigh more than two elephants). As far as deliveries go, it wasn’t that eventful – except that the forklift (seen hooked to the back of the truck below) got a flat tire halfway through, so it delayed things a bit while the guy left to repair it. 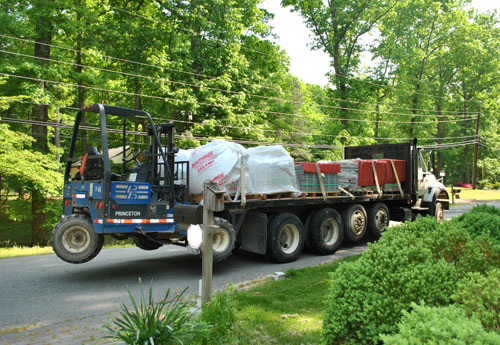 But eventually everything made it into our carport in one piece. If you’re keeping track, that’s three giant bags of fill gravel, one giant bag of sand, and three pallets full of cobblestone pavers (two of the rectangular variety and one of the square kind). 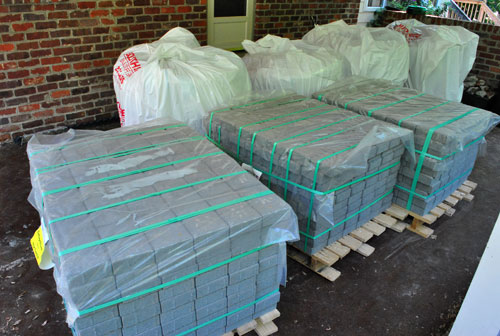 We picked a paver called CottageStone by a local company named Eagle Bay. Yup, it’s manufactured right here in Richmond and we discovered it just by asking for the most affordable paver cobblestones at a local stoneyard called Southside Builders Supply (it came out to be around $2 a square foot, which beat both Lowe’s and Home Depot prices by around 75 cents, which really adds up over 300 square feet). The color is a gray-ish tone that they call “Jefferson” (amongst other Virginia-tastic color names like “Blue Ridge,” “Chesapeake,” and even “Richmond”). It was pretty easy to make our color choice because we decided to do our best to roughly match the gray cobblestone pavers that are already in our driveway. So that’s how we picked our poison- er, pavers (read more about the cost of the whole project here). But enough about design decisions and money – let’s get back to the physical labor.

We took Wednesday off Project Patio because it rained, so Thursday was my next work day (while Sherry tended the blog, the baby, and brought me granola bars and water by the hour). As my trusty Lowe’s video and the saleswoman at the stone yard had directed me, the next step was to put down my weed blocker. I picked up this 300 square foot roll of Weed Block and ground staples to hold it down (weirdly called “Crampons”) from Home Depot. 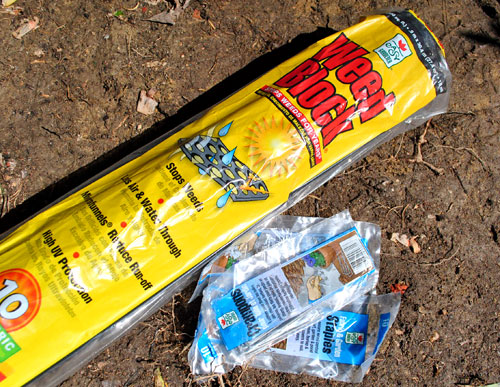 Since we know from experience that weeds and grass love to sprout up between paver stones, we wanted to at least discourage their appearance (although we’re huge rebels… just kidding… we like to follow directions or we start to hyperventilate). Here’s the area all covered in the Weed Block sheets just as recommended. It was pretty easy to cut it to size with scissors and then just stab each row into place with my crampons, so this step only took me about forty five minutes. 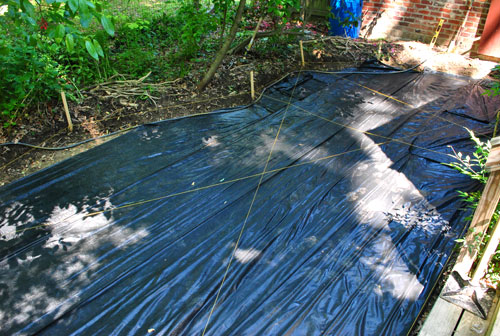 Next up: gravel. And not just any gravel – THREE EFFING TONS of it. 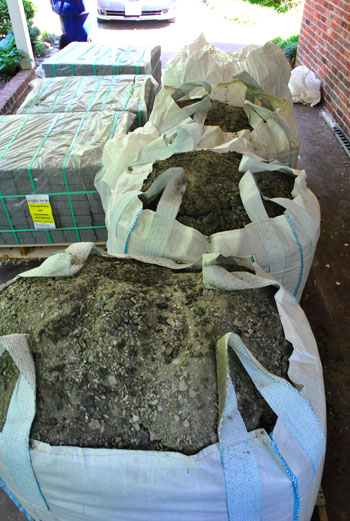 Laying this gravel basically consumed my entire Thursday. My wheelbarrow wouldn’t fit through the gate separating the carport and the patio area, so I resorted to carrying the gravel bucket by bucket (thanks to a spare 5-gallon paint bucket that we had on hand) back and forth all day. It was exhausting and disappointing (only because I fully expected to look like Hercules when I was done, but still found myself staring at my usual spaghetti arms). But in the end I was glad that I went the bucket route instead of using the ol’ wheelbarrow, because it allowed me to keep my nylon strings in place, which were invaluable when it came to ensuring that everything was nice and level with a slight slope away from the house (which is really important for drainage reasons). 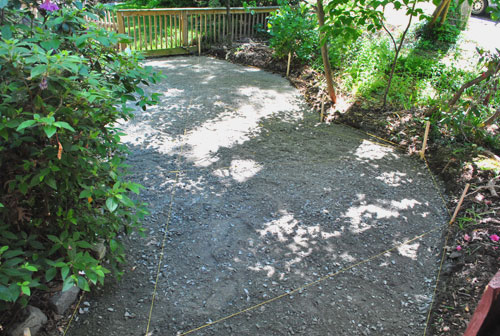 But my workout for the day wasn’t complete, because the gravel had to be tamped down. First I lightly misted the whole area, which started to turn the loose gravel into more of a cement-like consistency. I paid close attention to the Lowe’s video at this point in the process, which instructed me to make it moist enough to clump, but not to go overboard and get it too wet. So my advice would be not to go spray crazy and just look for that cement-like clumping action and then step. away. from. the. hose. 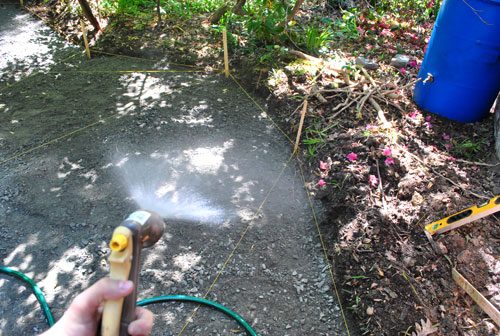 The tamping was a manual task again (sigh) because we opted to purchase a $30 hand tamper instead of going through the trouble / expense of renting a plate compactor (our car is small, we’re cheap, and I may have already mentioned that I wouldn’t mind bigger biceps). It wasn’t a particularly enjoyable task, but honestly at that point my arms were sorta operating on autopilot. And it was actually really gratifying. You can see how it turned my gravel pit into a flat, semi-solid, and ready-for-sand surface below. It almost looked like asphalt in the end. But sand would have to wait for Friday. Over seven hours of Project Patio was enough for me (and the sun was starting to set anyway). 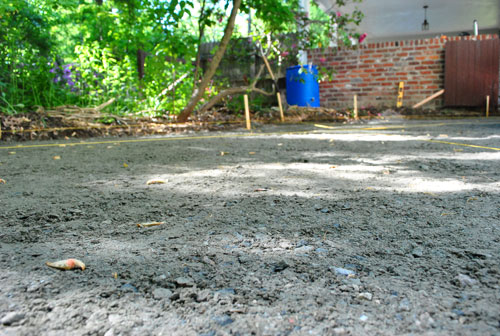 After taking Clara’s 51-week photo on Friday morning, I threw my patio pants back on and got to laying down a 1″ layer of sand. I couldn’t have done this part without the brilliant tip from the Lowe’s video involving two pieces of 1″ PVC pipe. Praise google. 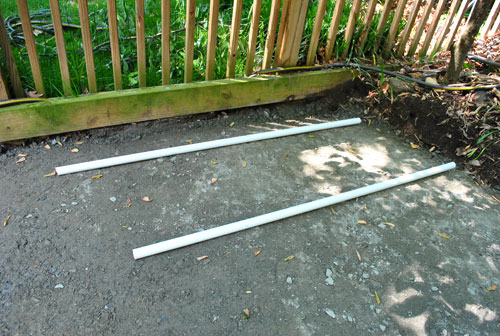 You basically lay them down side-by-side and then dump your sand over them. 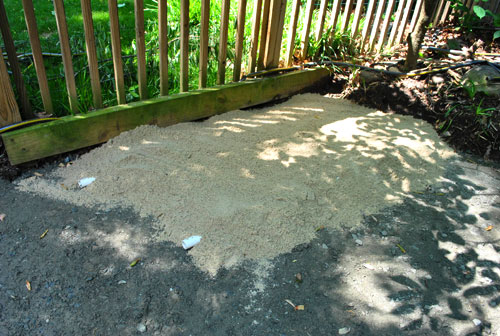 Then using a spare piece of 2 x 4 (or in my case, some extra trim molding) you scrape off the excess sand which leaves you with a flat, paver-ready surface of sand (which is exactly an inch deep thanks to the pipe “spacers”). 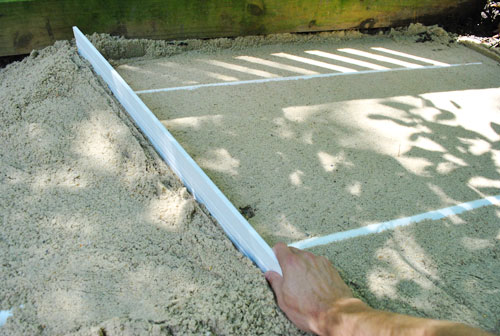 Then you carefully pull out the pipes and fill the empty “pipe lines” with a little bit of excess sand (by hand) for a totally flush look. Let’s just say it was a much faster process than the gravel was (since it only had to be an inch deep instead of three, which made it a lot faster to haul). Here it was half-complete: 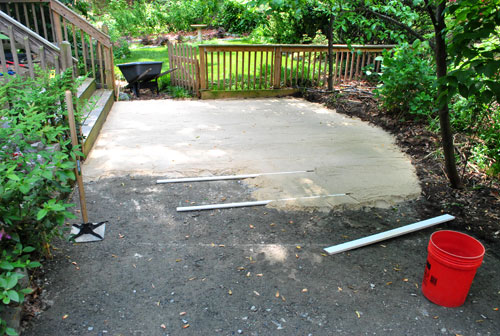 I would’ve finished faster had I not run out of sand at the very end. But fortunately a quick trip to Lowe’s for a few extra bags did the trick (notice the color change at the far end of the area?). 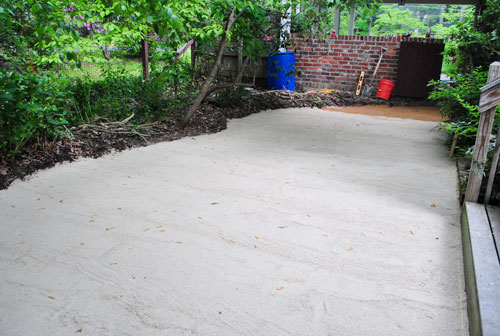 The last step before we could fiiiiiinally get to putting down stone was to install the plastic edging to hold all of our pavers in place (which will end up being virtually invisible once we backfill it with dirt/mulch on one side and pavers on the other). We had heard different theories about whether you should do this before or after you put your stone down (apparently it can work either way) but we thought it’d be easier to plan our curves with the flexible edging than with the heavy stones themselves. And we can tell you from experience that it was the right way to go for us – definitely consider adding the edging first if you’re doing any sort of curve and would appreciate a nice set guide to follow. 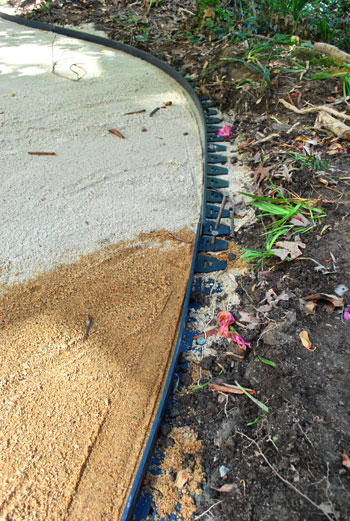 By this point it was about 4pm on Friday. I really wanted to call it a day, but Sherry and I were determined to get some of the pavers down so that we could at least start to see the patio come to life. So I charged forward and promised myself that I’d just put down the entrance area. A couple of hours later (yes, it was slow going at first), I had this: 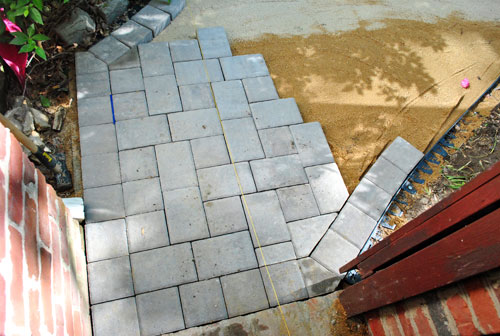 I’ll get into the ins and outs of cutting and laying the pattern in the next post, but below you can see things progressing slowly but surely. Sherry snapped this pic right after she put Clara down to sleep for the night (hooray for a 7:15 beanette bedtime, which gave us some daylight to work together on it- enabling us to move twice as fast during that narrow evening window). And thankfully we didn’t hear a peep from Clara (you know Sherry had the baby monitor outside on high, just in case). But Clara must have known we were busy making a patio for her birthday bash. Smart kid. 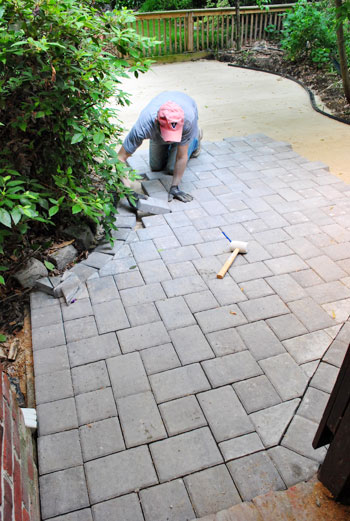 We both decided to put all the cuts on hold for the night so that we could focus on just filling the central patio area with as many whole pavers as our arms could carry (and avoid operating a wet saw in partial darkness as the sun began to set). 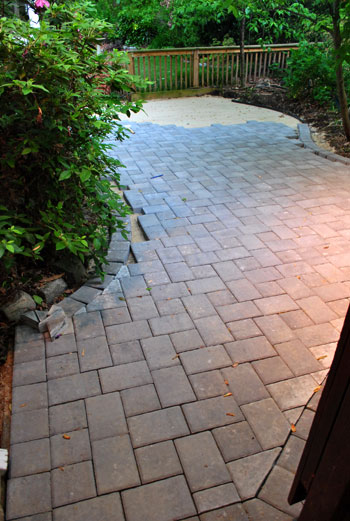 By some miracle, our energy held out ’til about 9:30, when we finally laid the last full paver at the far end of the patio. So you can sort of start to see how things are coming together, despite the darkness and all those missing stones around the borders that we still have to cut. 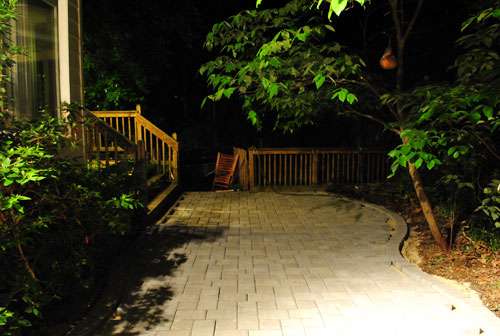 Our camera batteries only lasted long enough to attempt to snap a few pics of us “conquering” this task. So we just got a few blurry shots like this winner before the camera shut itself down: 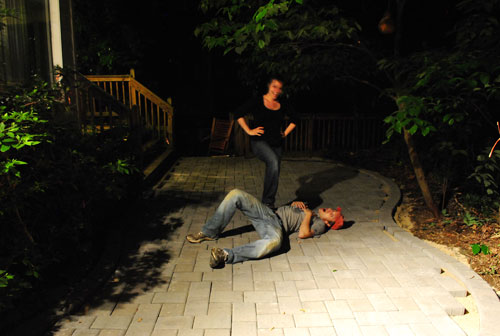 Notice how I chose the role of laying down and looking exhausted? I plead that so-tired-you-feel-drunk phenomenon that occurs after a loooong day (when everything makes you die laughing and you kind of lose your mind for a minute).

So now you know how the Petersiks spend a Friday night. Actually, we did cap it off with a Netflix movie (after a much-needed shower, of course). We saw Love & Other Drugs if you’re wondering. And we thought it was just as naked as the critics said, but not bad. Just don’t rent it with the extended family over the holidays or anything (awkward).

How To Make Your Home Feel Like Home
Fab Freebie: The Royal Treatment