It goes without saying that we’ve always been suckers for a good before & after (show me someone who isn’t and I’ll show you someone who hates fun). But thanks to our adventures in 100-year-old-beach-house-renovations over the past few years, we’re especially fond of seeing people bringing old houses back to their glory. Oh the things you’ll find behind the walls! So when Mandy shared photos of her and her husband Joe’s project in nearby Charlottesville, VA, we were basically cooing over them like two pigeons discovering an old pizza crust on a New York City subway platform.

Even without furniture (they fixed it up and then sold it before even needing to furnish it) the transformation is stunning. They also named the house “Blanche” (you know I’ve never met an inanimate object I didn’t want to name) since she is a classic old beauty – built in 1901 on a great street. Blanche had great bones, but was suffering from years of neglect. So let’s tell Blanche’s story and share a whole bunch of eye-bulging before and afters, shall we?

Here’s Blanche as she looked when they bought her: 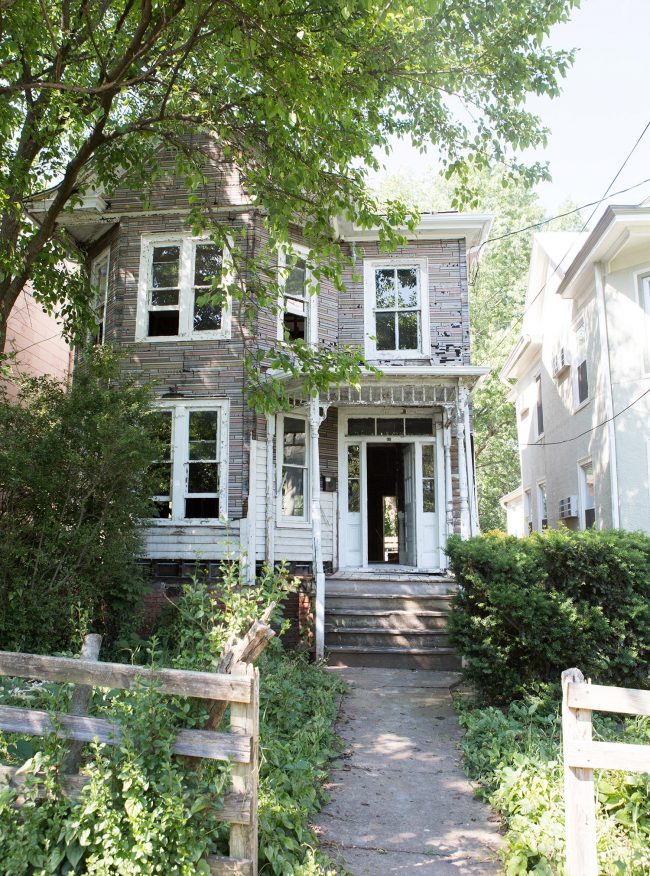 The house was essentially a full gut job – including tearing off a wobbly deck, hacking through an overgrown yard, and accumulating three dumpsters-worth of rubble across several weekends. Oh, and a few weeks into demo Mandy and her husband found out they were expecting a baby… meaning their house project deadlines were soon up against a pregnancy deadline. Gulp!

But fret not, here’s Blanche now. TOTAL STUNNER, amIright? Actually she’s all landscaped with grass now, so she’s even cuter, but Mandy didn’t even get a chance to photograph that since a buyer swooped in and grabbed it before they got to that stage. 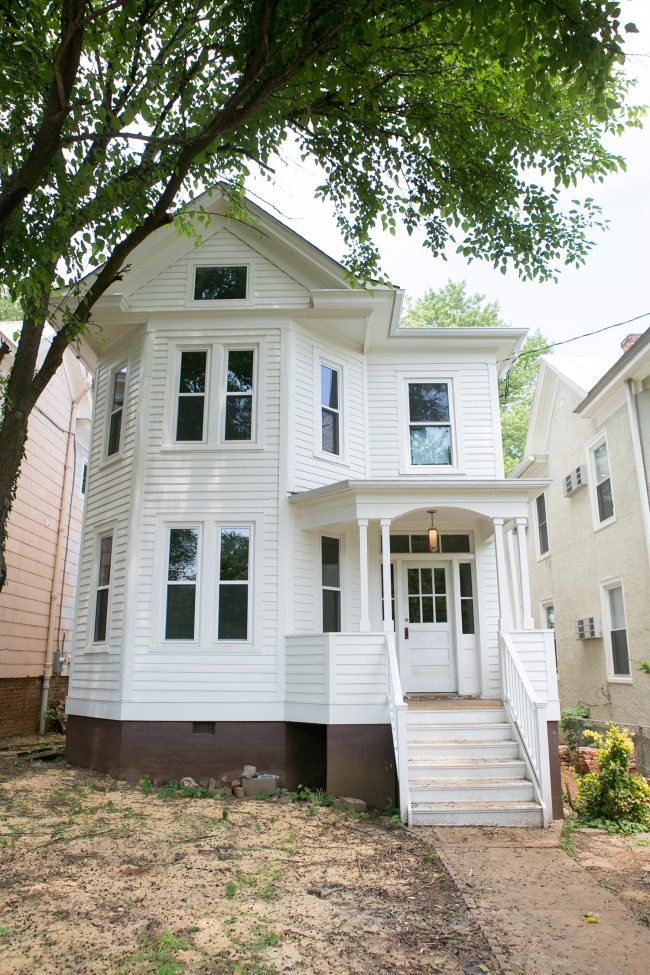 They reused or brought back as many historic elements as they could: baseboards, trim, mantles, doors, etc. The many dated layers of wallpaper, however, didn’t make the cut. Although creativity points for this use of a border along the stairway by someone years ago (this is a before shot): 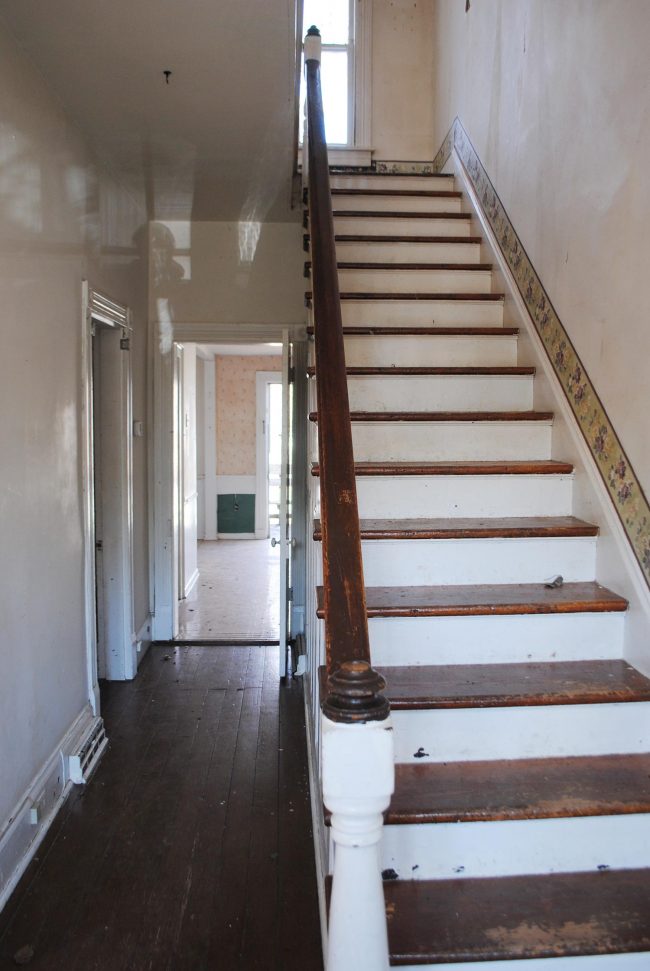 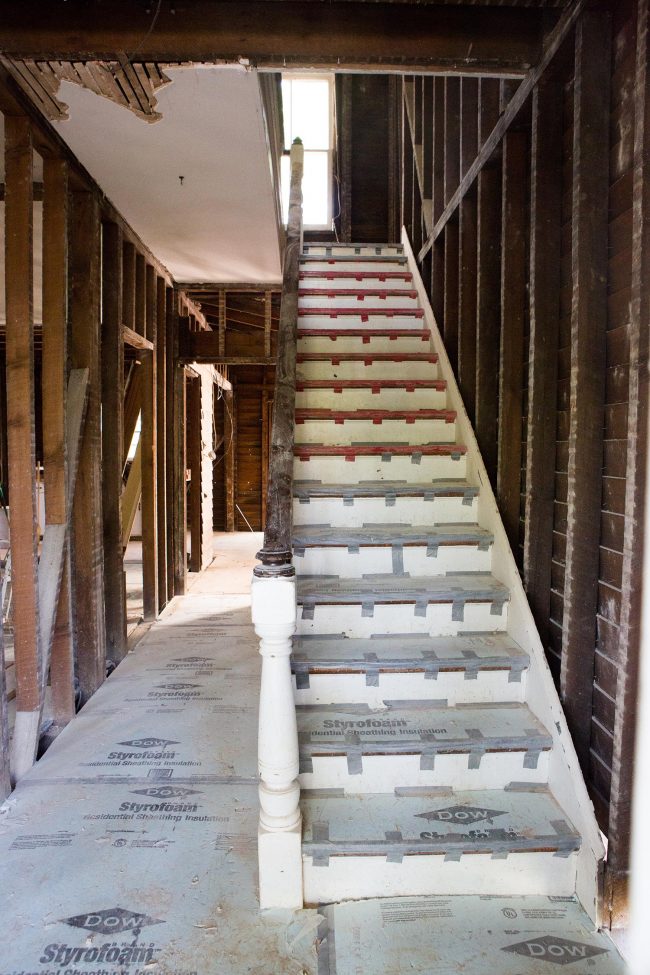 The finished foyer, like much of the house, now sports classic colors (gray, brown, white), along with matte finishes and warm woods. I love how your eyes travel to that charming wooden back door with that giant pane of glass. And the cool sliding door on the left (with a double transom window on top) makes me want to scream HUBBA HUBBA! #zerochill Also she scored that gorgeous light on craigslist! 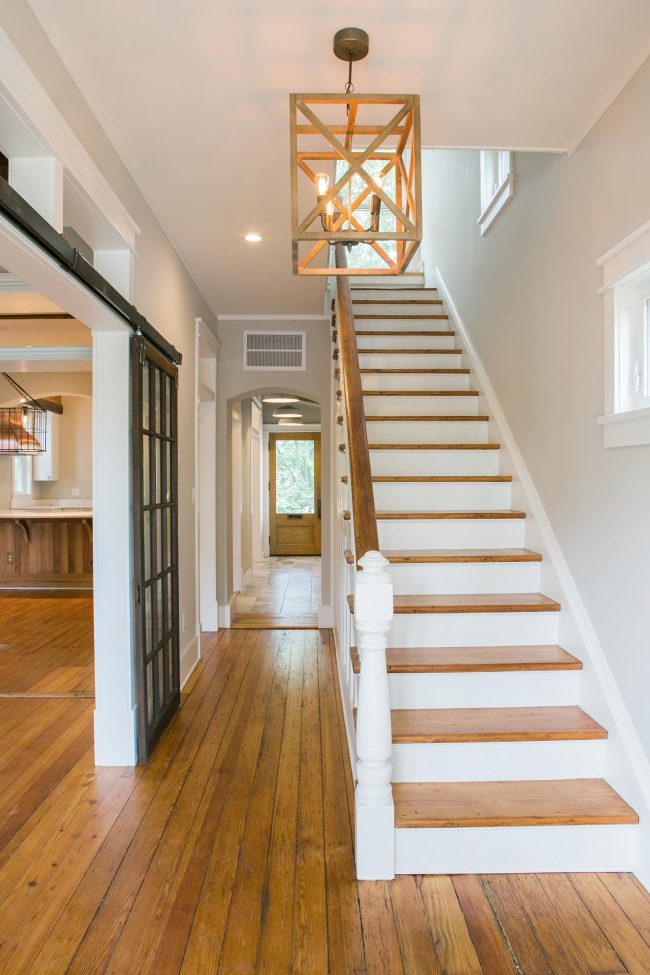 There’s lots to be envious of in this foyer, but the original millwork that survived on the side of the steps is one of my favorite details (so rare when rot spares the perfect thing – it reminds us of this miracle at our pink house). Also, check out the amazing light that comes in through that front door situation. Gimme allllll the glass. 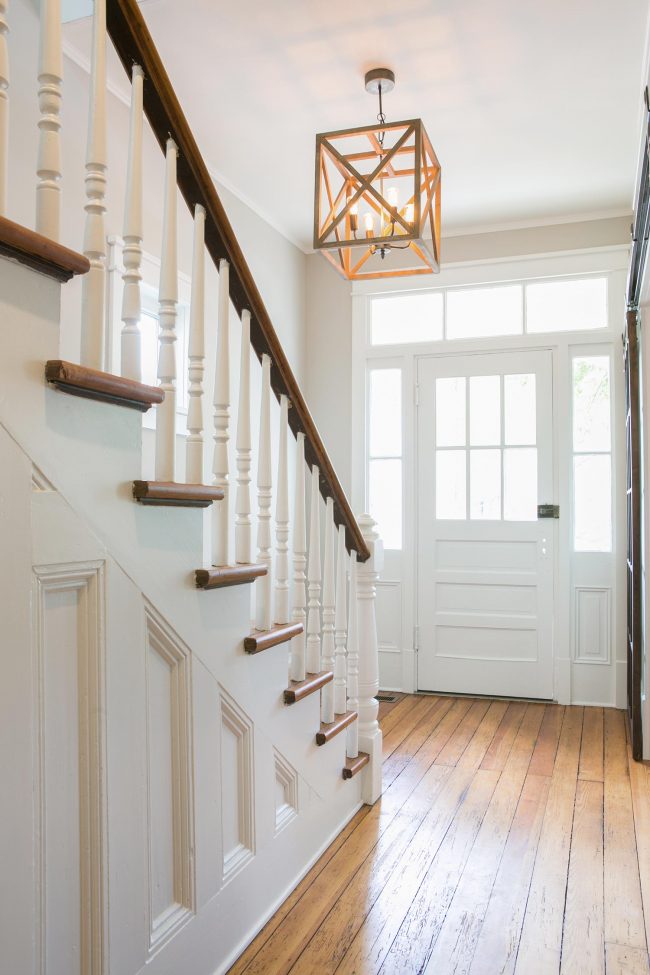 Speaking of getting to save gorgeous original details, the hardwood floors, stairs, and handrail were all refinished to enhance the lovely old pine throughout the entire house. (And you know we love old pine floors…).

Let’s move on to the dining room. Here’s a before shot for ya: 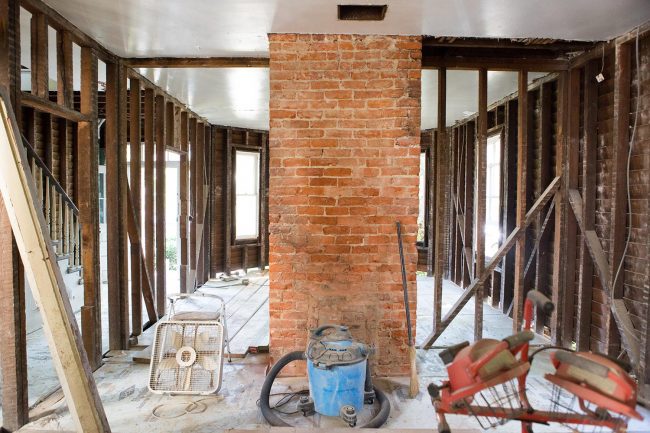 And here’s an after. LOVE the mantel they added in front of the original chimney, and the built-ins with glass doors and marble tops (along with that marble fireplace) are so classic and pretty. Actually those upper cabinets with the glass doors were found at a salvage place called Caravati’s here in Richmond. Also, I see you transom windows! Looking fyyyyyneeee. 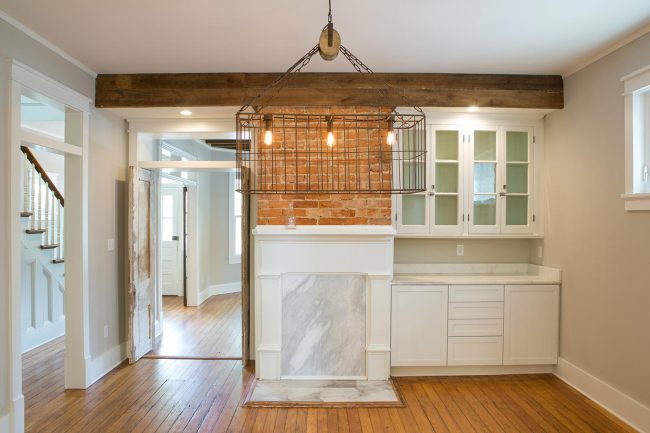 The kitchen is one of the coolest updates that they tackled. They stole space from the attic to bump the kitchen ceiling into an arch and then covered it with reclaimed wood boards that they saved from the house during demo. It ended up being Mandy’s favorite project in the house. I mean, I can see why. Here’s one more shot because I can’t get enough. The antique light fixtures came from an old barn here in Virginia (purchased through a salvage shop). That wood ceiling + the stone floors + marble tops = FIRE. And remember that wood door you could see in the background of the foyer shot? Well, they turned it into a super functional mudroom in the back of the house. This is that space before… Here’s the same spot during demo… And here’s the after! Mandy incorporated salvaged items from other buildings if they were missing or damaged in the house. The mudroom’s tin ceiling was from a restaurant in Alabama (purchased on eBay). The light fixtures were old salvage finds too. 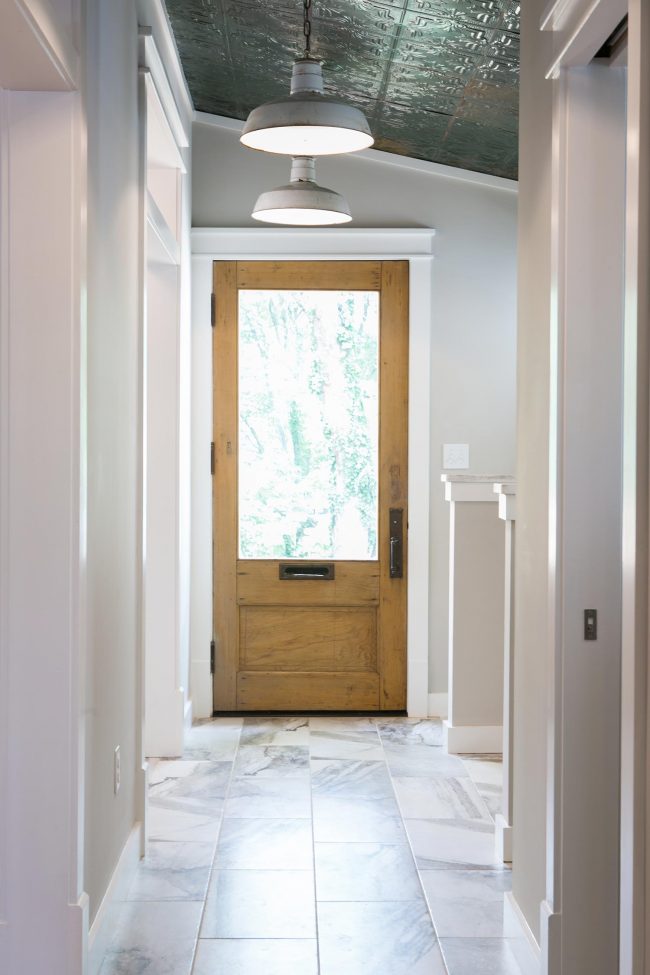 LOVE how much they reused and how many other old items were looped into this home’s history – via ebay, salvage, and beyond! Here’s a demo shot of the upstairs hall: 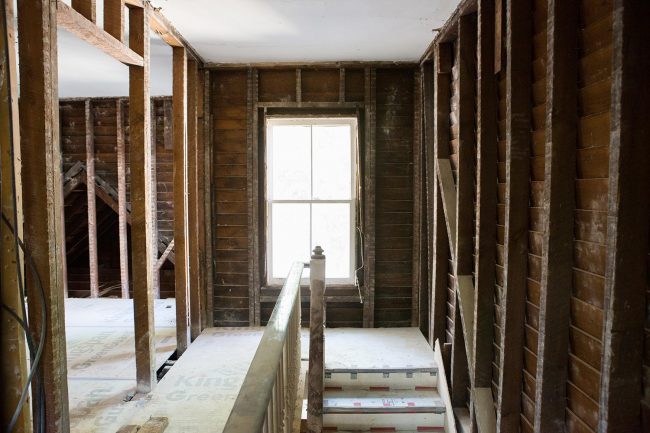 And here’s an after shot of the same space. They doubled the light and added that amazing built-in bench underneath the giant panes of glass. IT’S BASICALLY HEAVEN IN A HALLWAY. 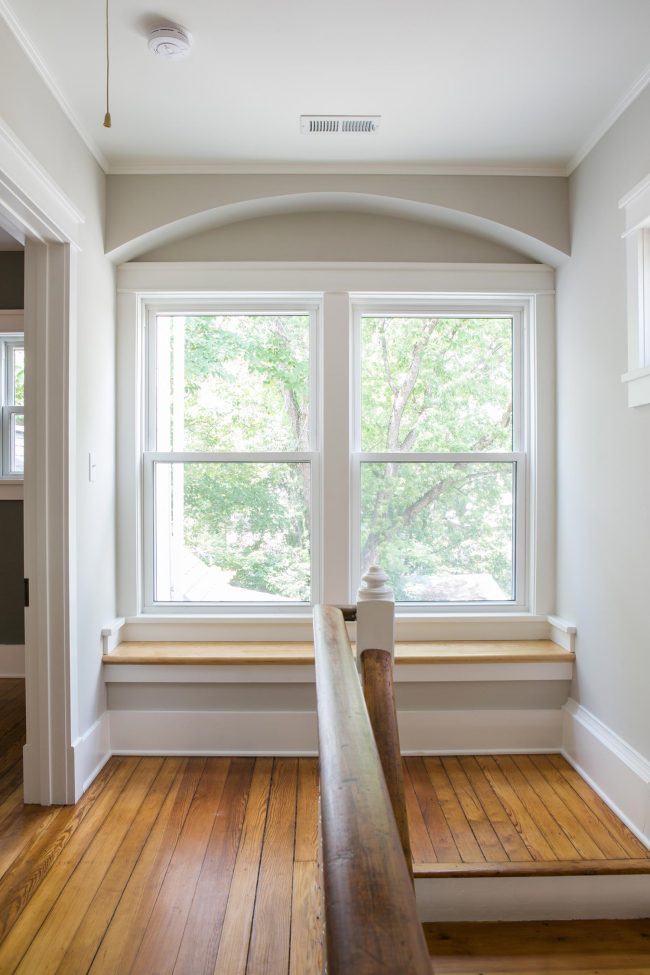 Here’s one of the bedrooms during demo: 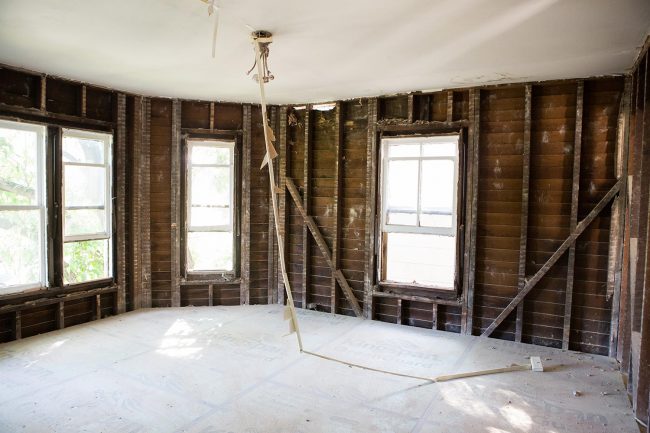 And here’s the after. They discovered a part of the ceiling could be lofted and reused all of the original trim. The little rosettes in the corners of the windows KILL ME. I’m typing this from the grave. 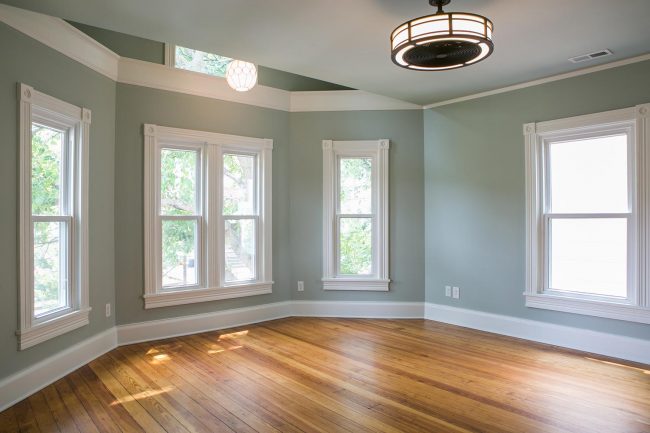 We have the same original rosettes and trim downstairs in the pink house (we were able to save just enough to do that level but had to use new molding upstairs).

And now for a bathroom before. I know what you’re thinking. “How thorough of them to wallpaper the bottom half of that pipe.” 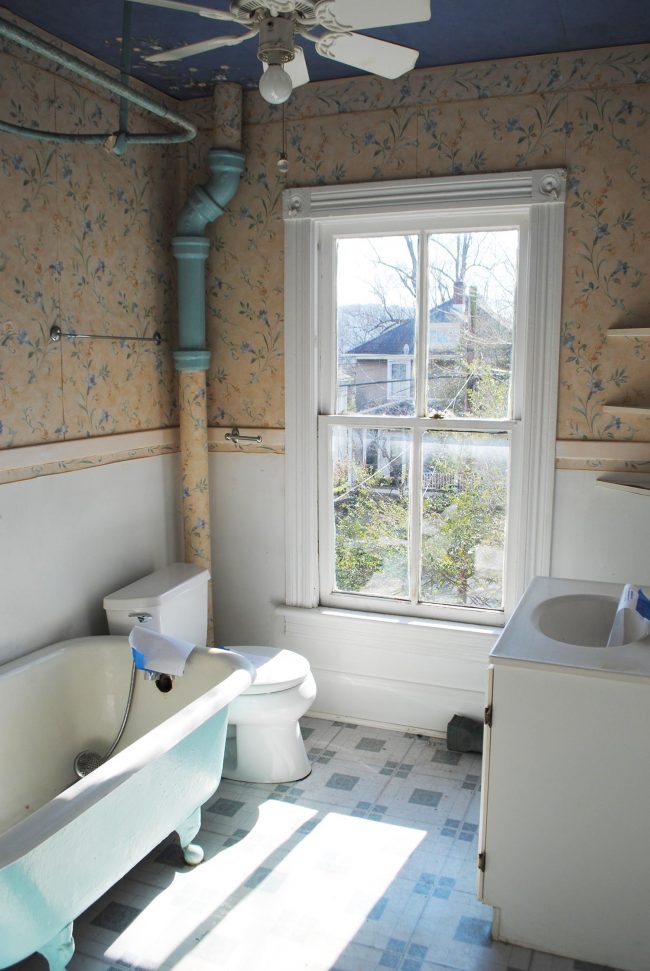 And here’s the very same bathroom after they worked their magic. One of the coolest things about this renovation is that all of the sinks were purchased on Criagslist (from old homes in Richmond or Stony Point). And amazingly, all the faucets and hardware were original and in working condition! 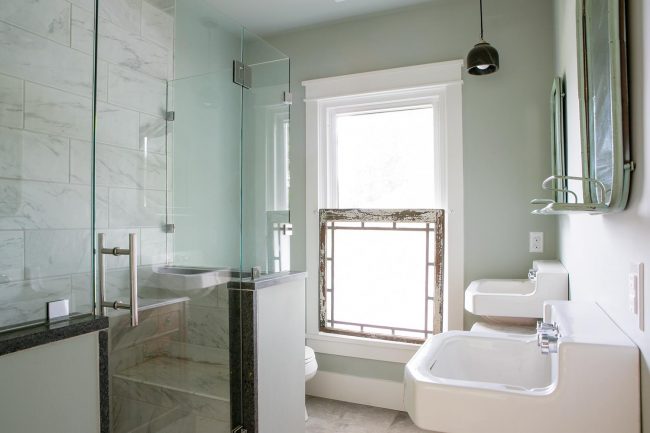 How charming is that old frosted window they hooked in front of the exterior window for flair? LOVE. 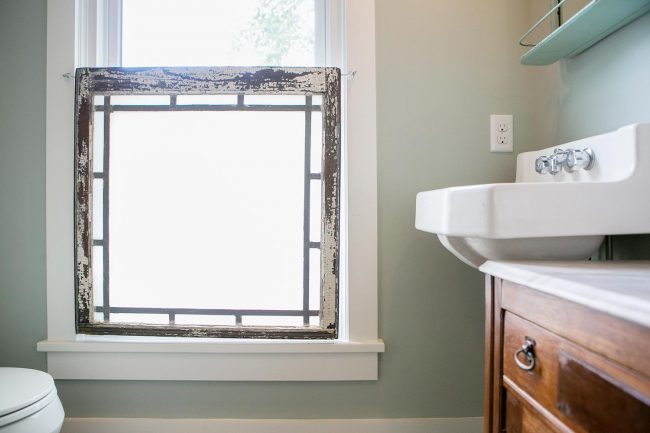 So a huge thank you to Mandy for sharing such inspiring and exciting before and afters! I know it might seem really far fetched to imagine yourself fixing up one of these older homes, but I’m telling you, just three or four years ago I probably would have said “that’s cool but way too hardcore for me!” – and yet here we are, doing it with not one but two houses on the Eastern Shore of Virginia.

I think just like they say “when you know, you know” about meeting The One, well… there are house soul mates too. And when you walk in (or even drive by) sometimes you get that feeling… and lookout! You might just end up walking through with a contractor “just to get an idea about the extent of a project like that” and then you’ll blink your eyes, and find yourself knee deep in your very own old-house renovation project. HA! It happened not once, but twice for us. One house apart on the same street! Here are all the posts about the pink house if you wanna catch up, and here’s everything about the duplex.

My biggest tip would be to get estimates from tons of experts even before you buy a house, just to be sure you can afford to fix it up, and to assemble the very best team that you can (we asked nearly two dozen people who their favorite people to work with in Cape Charles were, and very quickly noticed a trend as the same contractor and flooring people and other experts’ names kept coming up again and again). The right team, even if it takes longer to assemble, can make ALL THE DIFFERENCE!

Happy house-rescuing to you and yours!

#107: Are We All Getting Sick Of Watching Big Renovations?
#108: Science Says These Rooms Are A Waste Of Space