We’ve been mentioning our second book off-and-on for several months now, usually followed by promises to give you some details soon, so we’re finally fulfilling that promise.

How did you get a second book deal?

Our original deal with our publisher, Artisan Books, was for two books, so we’ve known since signing on with them in 2011 that we’d be doing a follow-up to our first book, which came out in November of 2012 (more on that whole experience here).

When will this one come out?

Right now we’re working towards a fall of 2015 release – although that depends on lots of factors (many beyond our control) so it’s not set in stone yet. Artisan has been great. Instead of pressuring us to jump right back into developing Book #2 right after the first book’s release, they encouraged us to decompress and take time to really be thoughtful about the second book. Having been through this process before, we have a much better understanding about how time consuming each step can be (the proofreading alone, my goodness!) so we know fall of 2015 will creep up on us faster than we think.

Will it be more of the same from Book #1?

Nope! There will still be specific projects and tips worked into every chapter, but the overall concept of the book will be different. We actually assumed Artisan would encourage us to follow the same format as Book #1 (if it ain’t broke, right?), but they really wanted us to make it different, so it could stand alone. That sounded a lot more interesting to us as well… albeit sort of elusive for a while. What concept and format would grab us this time? We spent nearly a year tossing around ideas, drafting rough outlines, and brainstorming with each other and Artisan. At some points, Sherry and I worried nothing would ever hype us up enough to say “that’s IT!”, but sometime last winter we landed on an idea that got everyone excited, which added up to some really nice momentum.

So… what will it be about?

Without giving too much away, the goal is to write a book full of real decorating ideas that fit the way that families really live. It’s all well and good to stare at gorgeous high end inspiration rooms, but where are the TV remotes? Where do they drop their mail? Do kids and pets actually live there? We want to highlight a bunch of decorating and organizing ideas that solve challenges that many families face, while making sure there’s not just form and function, but meaning in every space (so each member of the family feels at home). Obviously our household isn’t representative of everyone’s family structure, so we’re excited to step outside our own doors and include some other homes, which is a really fun departure from our first book, which was shot almost exclusively in our house. So in addition to chapters full of our projects and ideas, we thought peppering real home tours throughout this book allows us to showcase a greater variety of families, styles, and solutions.

Are you looking for homes to feature?

Yes! We’ve already begun shooting some of them, but there’s still room for more and we’d LOVE to consider yours (or your friend’s / neighbor’s / beekeeper’s). Here’s what you need to know if you’re interested:

What if I don’t have a home to submit? Can I still be a part of it?

Yes! We’ve got some other fun ways to work you guys into the book. We really want it to represent tons of families, so we’ll let you know more about them when the time comes.

Are you going to have those crazy weeks of photoshoots in your house again?

Hopefully not! We’re trying to make the process less hectic than last time, so we’ve been spacing out our photography – especially since this time we have the added challenge of coordinating shoots in other homes in addition to our own, as well as juggling a newborn. At one point we tried scheduling all the shoots to be done before Teddy arrived, but quickly realized it would be impossible. It was nice to check some off beforehand though, and Artisan has been so great about letting us pace ourselves and focus on enjoying Teddy’s arrival. We finalized our outline last month, recently started writing some chapter intros and tutorials, and are aiming to have everything else shot by the end of the summer, at which point we’ll have a few months to complete the manuscript. 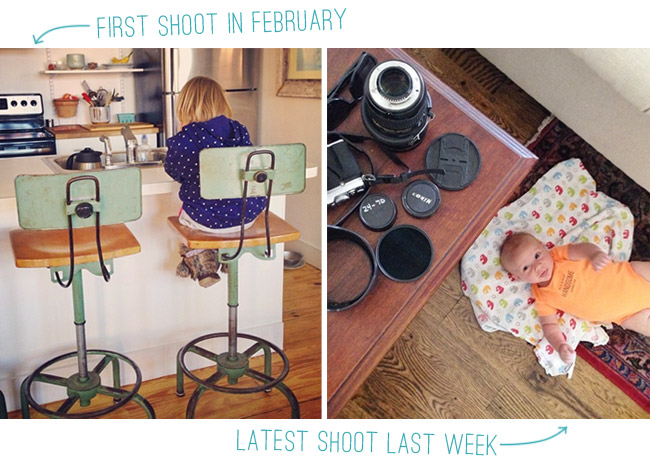 Will you be going on a book tour again? If so, will you be coming to my city again/this time?

This is another frequent question we get, but we haven’t really had that discussion with Artisan yet. Everyone’s focused on making the book first, so the tour stuff probably won’t get ironed out for another year or so. Our guess is that there will be some sort of tour but what and how many cities is a big ol’ question mark. So much of that depends on who’s willing to host an event, and that’s way too early to guess. For now we’re just grateful that we don’t have to think about traveling too far away from our kiddos for another year or so.

Fab Freebie: Earn Your Stripes
Our Laundry “Room” Redo Is Officially On