Ever thought your favorite colors could help you pick a career path? Well, we never did either until one of our readers (thanks Helen!) sent us a link to CareerBuilder.com’s “Color Career Counselor” quiz. It claims to use the Dewey Color System (which is referred to as “the world’s most accurate career testing system”) to point you in the right occupational direction, simply by predicting what may interest you most depending on which colors you like (and which ones you like the least). 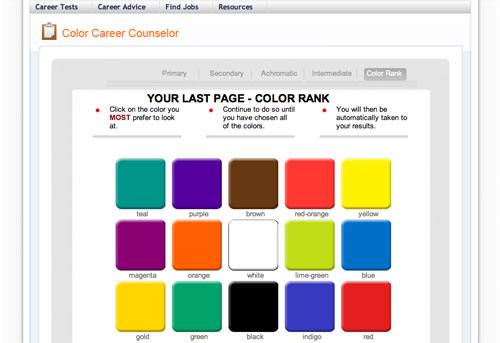 As usual, Sherry and I took it for a spin. Sherry’s results said she’s primarily an ORGANIZER and secondarily a RESEARCHER. Some of the highlighted keywords – Systematic, Self-Control, Self-Motivated and Independent – certainly describe my better half, though the suggested career paths (Accountant? IRS Agent?? Budget Analyst???) involve far too many numbers for her. I think she prefers her own interpretation- that she enjoys organizing closets and drawers between researching furniture options for mood boards and whipping up posts about our progress at home. Plus you know we like to research every major DIY project before diving in so it’s not too far off in that regard… 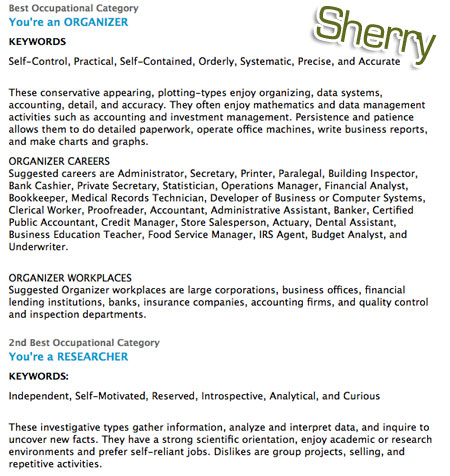 My results, however, were far more accurate. I was said to be a CREATOR first and an ORGANIZER second. Although I might not be as “nonconforming” or “emotional” as they indicate, the first career listed is what I actually do for a living: Advertising Executive (and oddly enough, Interior Decorator is also on the list). Who knew my preference for blues and my aversion to reds said so much about me? 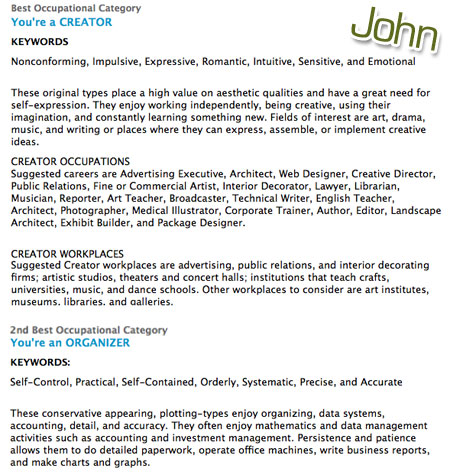 Now it’s your turn to take the quick test (just click here) and tell us how accurate you think the results are. Oh, and it’ll probably ask you to provide some personal information but you can just click “No Thanks” and skip that page without compromising your results. Have fun (who doesn’t love a pop quiz on Monday morning?)!