We spent Sunday afternoon doing what people do best. Being nosy. This time (as we alluded to on Monday) it took the form of invading strangers’ homes as part of the Woodland Heights Holiday Tour of Homes.

We had never heard of Woodland Heights before Sunday, but apparently I drive through it every morning on my way to work. It’s on a section of road where a visible mix of historic homes and dilapidated buildings always made me think “aww, it’s a shame such cool, old houses are in such a rough neighborhood.”

Apparently my assessment was way off. In fact, Woodland Heights is a very polished neighborhood, based on what we saw on the tour. Most of the homes were huge, dated back to the early 20th century and were in pretty incredible shape. The homeowners – none of whom seemed short on cash – had all balanced historic details with great modern amenities (I’d like to see the budget on some of those kitchens.)

It was fun to see how the owners rolled with the old quirks (uneven floors, goofy floor plans) and embraced the neighborhood’s age (one house still had a stone carriage step out front). But the tour was really about the extravagant Christmas decorations. Between 7 houses we must’ve seen over 20 Christmas trees, 500 yards of garland and thousands of lights. One guy apparently spends a full week decorating his 12 foot tree every year. It was pretty amazing. Some might even call it a “vision in tinsel.” But that’s only if you’re Sherry and you’re feeling cheesy.

We’d love to show you interior shots but pictures weren’t allowed inside. So here are a couple shots we snapped outside before hiding the camera in Sherry’s purse and stepping inside. 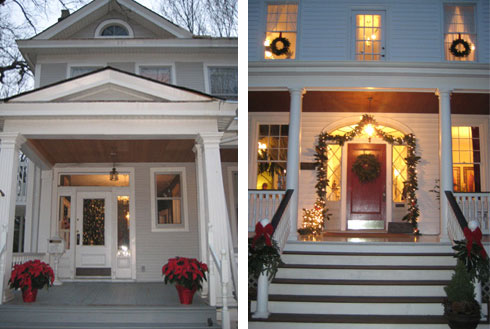