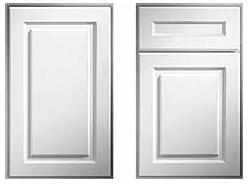 Last week we got the call. Our cabinets are on their way! They’re arriving on Monday the 26th- which means we’re finally able to schedule all the installation details. So now it’s looking like we’ll have a kitchen before the end of the year. Happy New Year to us. When we first walked into Home Depot eons ago (i.e. September) we knew two things about our cabinets: we wanted white and we wanted KraftMaid. White because, duh, our dream kitchen says so. KraftMaid because our friend who works for a home decorating magazine swears by them. They’re close to the most expensive cabinet brand both Home Depot and Lowe’s carry, but Nancy Kulik CKD agreed 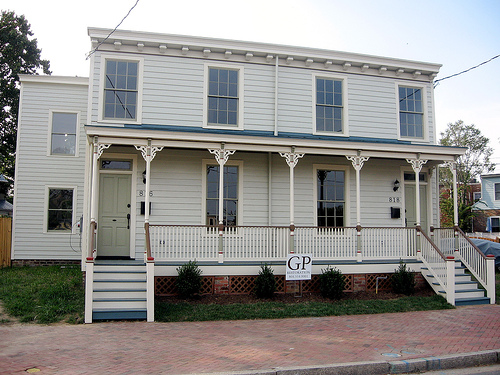 As I type this we’re watching a historic Richmond home undergo a dramatic restoration. TLC is airing a special episode of their “Flip That House” series (the first of its kind) called “Flip It Back.” The hour-long special documents the historic renovation of a 19th-century folk victorian duplex in good ol’ Richmond, Virginia. When the flipper bought it in 1999 it was only $11,000… and a crack house that was littered with “needles, condoms and porn” according to this article. Don’t worry, the drug den is nowhere near our ‘hood, it’s closer downtown in an area called Union Hill that, according to this show, has the largest collection of folk victorians in the US. If 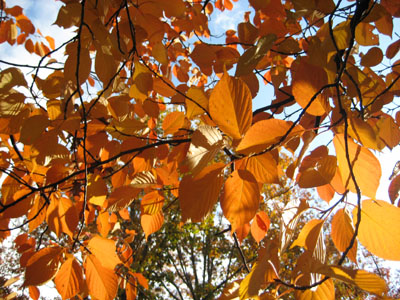 Feels like it has taken a while for autumn to hit Richmond, but it’s finally here in full force. Its late arrival probably means it won’t be long ’til all the yellows, oranges and maroons are replaced with brown and more brown, so we were sure to capture the fall colors on film while we could. Enjoy! 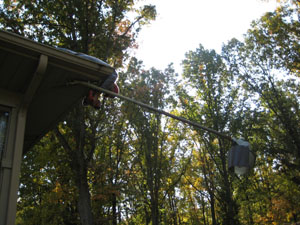 Consider it our home’s hangnail. A big, ugly, rusting floodlight protruding off the back corner of our sunroom. A good idea in theory – cast light across the beautiful backyard, right? – but pretty crappy in reality. The thing buzzed like a giant, vibrating cellphone and the sickly blue light that it gave off was totally unnecessary (thanks to three other, more attractive lights in the back). In the 18 months we’ve lived here it’s been used, um, never. Sunday morning = time for it to go. With my barely-tall-enough ladder I teetered while managing to unscrew it from the exterior wall and snip & cap the wire. But I couldn’t reach the part where I surprised Sherry on Sunday with a day away from the 50-year history of house for the almost 300-year history of another. We spent the afternoon at Shirley Plantation, established in 1613 on the banks of the James River, just 30 minutes east of Richmond. Not only is it Virginia’s first plantation, but it’s the oldest family-owned business in North America. It’s also a pretty cool place to poke around on a sunny, fall afternoon. They don’t allow photos inside the main mansion (where the 11th generation of the family still lives), so we can’t show you the crazy “flying staircase” or ornate moldings and windows. But we did catch plenty of moments around the 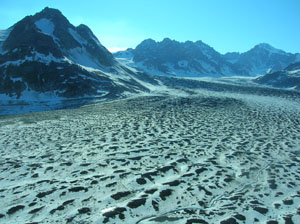 With a house full of newly painted neutral walls, we’re psyched to have plenty of rooms begging for some art. So hopefully you’ll start to see several posts about good artsy-fartsy finds. We’re starting with a John & Sherry original. When we went on our Alaskan honeymoon in July we took tons of memorable photos, including the one below during a private seaplane flight to a remote volcano several miles outside of Anchorage (yep, I said volcano in Alaska). That field of blue and black in the foreground is a glacier speckled with deposits of volcanic ash. Definitely not something you see everyday. On a whim, I desaturated the pic in Photoshop to see what

Do you ever feel like there are too many options in the world? If so, DO NOT attempt to pick out new counters. Or just make sure you’ve got a wifey with extensive internet research skills. (And if you don’t, hands off – this one’s mine). Here’s what I learned from Sherry’s quick crash course. Laminate and marble were immediately out of the question. We already had laminate and wanted to upgrade to something more natural and less plastic-y. And as gorgeous as carrera marble can be (we loved it in our inspiration kitchen), it eliminated itself from the mix thanks to being much too expensive (about $100 a square foot) and not nearly as

You’ve seen plenty of photos, but it was ’bout time we got all 21st century up in this mother. Here’s the minimally-anticipated world premiere of our first video house tour. Sherry plays Vanna while I take on the role of Spielberg…and keep an eye out for a cameo by Burger. Enjoy it HERE on YouTube. 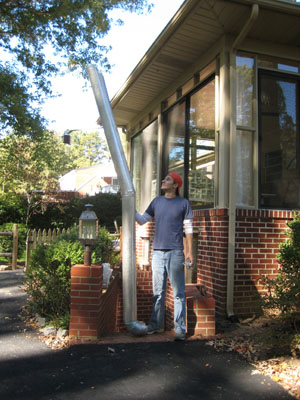 On Saturday I found myself in our crawl space on a mission to get our heating system ready to earn its keep. We had our annual system cleaning on Friday and learned two things from the service guy: (1) We’re almost out of oil and (2) we needed to cap off a floor vent that we covered up with the new hardwood flooring installation. The vent had been right next to our old brick doorway, but it was intentionally covered when that opening was widened (who wants to trip over a floor vent in the middle of a doorway?). And don’t worry, we checked with an expert first to make sure it wouldn’t screw up In case you missed the orange button that screams (begs?) “VOTE FOR ME!” on our sidebar, then you wouldn’t know that we’re entered in RemodelingMySpace.com’s “Remodel, Blog and Win” contest. Their esteemed panel of experts will award the $5,000 Grand Prize to the bloggers demonstrating the most home improvement AND blogging prowess. But another esteemed group of experts – you the people – will award the $1,000 People’s Choice Award by casting your vote by November 30th. (I’ll take care of that brown on my nose once I’ve finished buttering up you beautiful, beautiful people.) If your love of voting for things (or earning compliments) isn’t enough, your vote will also make you eligible for With our kitchen designer back in town we took some more measurements and worked out all the kinks in our design – and FINALLY ordered the cabinets and countertop this weekend. That kicks off the slow process of fabricating and installing everything, which is estimated to take 12-ish weeks. Fortunately, we know the Home Depot is generous with their guesstimations, so we’re crossing our fingers for something a little sooner. Either way it buys us plenty of time to fill everyone in on the details. When it came time to start the design process, Sherry and I holed up in Barnes & Noble one night sifting through home magazines and books, searching for the perfect 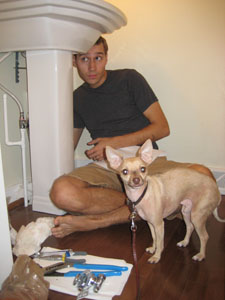 The weekend kicked off with what seemed to be our biggest plumbing project ever. Mainly because it required turning off water to the entire house (which involved me sticking my hand down a muddy, bug-filled hole in the front yard with a tiny wrench as my only weapon.) We were fixing a small leak the floor guys created when they re-installed our bathroom pedestal sink. It couldn’t be fixed by simply turning off the water under the sink because that shut-off valve was the very source of our problem. And the last thing we wanted was a leak onto our new floor. Luckily, we had been able to temporarily tame the leak by turning off